Editor’s Note: This post is another entry in the Prepper Writing Contest from Mike Turner. If you have information for Preppers that you would like to share and possibly win a $300 Amazon Gift Card to purchase your own prepping supplies, enter today.

This article will look at a range of modern tools for creating fire, also known as fire craft, as well as a few old ones, and look at the issues with each. It will also cover ways to help prevent them and look at age-old advice and tips from bush-craft masters such as Dave Canterbury, Cody Lundin and several others.

What is Fire Craft?

Fire craft refers to the ancient art of building, creating and maintaining a fire. It is not just sparking a lighter or striking a match. True fire craft requires a great deal of time collecting resources and skill when generating an ember or spark. It should always be at the back of your mind when on the trail in the form of collecting resources and at the very front of your mind when engaged in the act of attempting it.

As many experienced survivalists know fire craft can easily be explained by the Fire Triangle. This is well explained in Dave Canterbury’s Bushcraft 101. The triangle consists of three main elements: fuel, oxygen(air) and heat. For the purposes of this article we will be looking at the heat element.

What does modern man have to offer?

Modern methods of fire craft date back to as far as 27BC when the flint and steel were used by the Roman Empire, and most likely before then. This man-made method relied on a simple piece of flint rock and a piece of iron pyrite, later on steel, to achieve a spark. Char Cloth is also used here to aid in the process by holding an ember within the charred fibers of the cloth. This is also known as percussion fire lighting.

Since then we have come up with several new ways to get a fire going. Aside from the obvious match or lighter, many bushmen use one or more of the following tools in fire craft:

Bushcraft 101: A Field Guide to the Art of Wilderness Survival

The ferrocerium rod is at the heart of most bushmen’s and survivalist’s fire starting kit. The rod itself is made up of a mix of iron, cerium, lanthanum, neodymium and magnesium. However the composition of the metal may vary depending on the manufacturer.

Most rods on the market today are about 0.5cm thick and 6cm long. However, more high-end rods will exceed these measurements. The sparks themselves burn at an excess of 3000 degrees Fahrenheit. This is a substantial increase over the sparks thrown from a traditional flint and steel which are about 800F. While we all want more bang for our buck we still need to know what we want in the first place and why we want it. Here are some key points, issues and solutions concerning the ferrocerium rod:

The magnesium block works as both source of ignition and tinder all in one. This piece of kit has all the advantages of the ferrocerium rod and does not have the disadvantage of the grip issue. By using the striker or a knife to grind off small slithers of magnesium from the main block into a small pile, you create an extremely flammable and ready for use tinder source. These shavings can be used as they are or to enhance an already existing tinder bundle or birds nest. While these shavings are finite an average block will give you dozens, if not more, of sets of shavings for tinder before it is worn out. 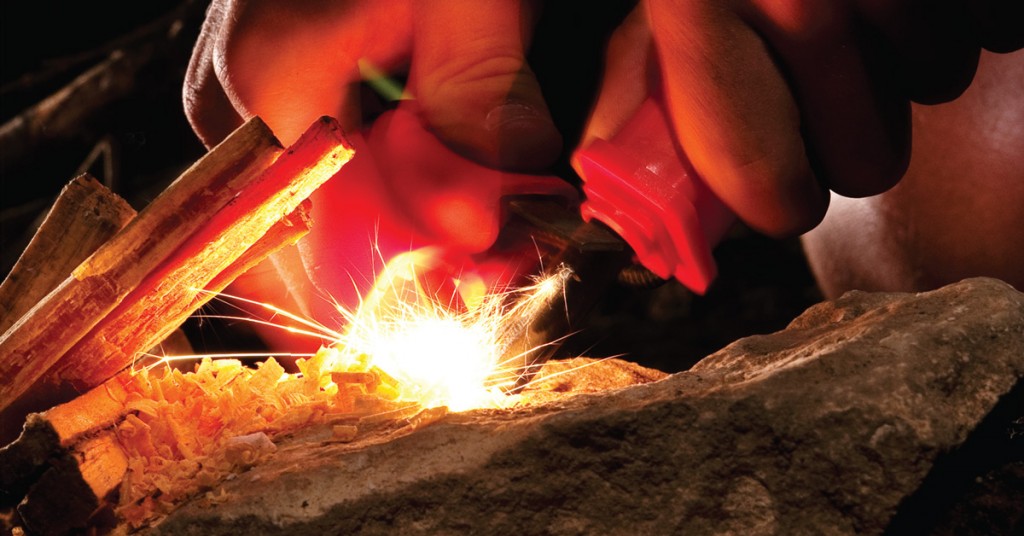 The ferrocerium rod is at the heart of most bushmen’s and survivalist’s fire starting kit.

While this tool requires very little maintenance it is susceptible to oxidation and should be cared for by oiling the block when not in use and spraying the rod if left unused for long periods of time. While I find this to be a great method for lighting a fire it does have one flaw. As the rod is built into the block the surface area of the exposed rod is cut by about half. This means that the life of the rod is also cut, unless you can separate it from the block.

To get the most out of your block keep it well oiled, shave it carefully and keep it in your pack or pocket to avoid unwanted chipping of the block.

Simply put the spark wheel is a lighter without the gas. It is small, light weight and able to create a spark strong enough to light fine tinder. While the simplicity of the wheel is in its favor it is a distance second to a ferrocerium rod or magnesium block due to the heat that the spark puts out. This being similar to that of a piece of flint. The main advantage is the size, weight and the ability to work without a striker. It is an all in one piece of kit that can fit on your keys for any occasion. The downside here is the need to replace the flint inside. However, in this modern age flints can be found everywhere. A discarded lighter will act as a spark wheel in a cinch, but if you prefer your own you can always harvest the flint from the lighter when yours blunts.

The fire piston or fire syringe as it is also called has been around for longer than all of the previously discussed methods of making fire. European explorers in 1865 found evidence that the fire piston was a well established way of making fire in the jungles of Indonesia, Burma, the Malay Peninsula, French-Indo China and Borneo. This leads us to believe at it was invented well before that. It works around a basic principle. When air is compressed under high pressure it raises in temperature very fast, causing the tinder at the end of the rod to ignite. The internal heat of the rod gets up to around 500 degrees Fahrenheit. Cover the end of your bike pump and see for yourself. Place your finger over the end and you will find the metal thread gets hot, fast when you pump it suddenly. 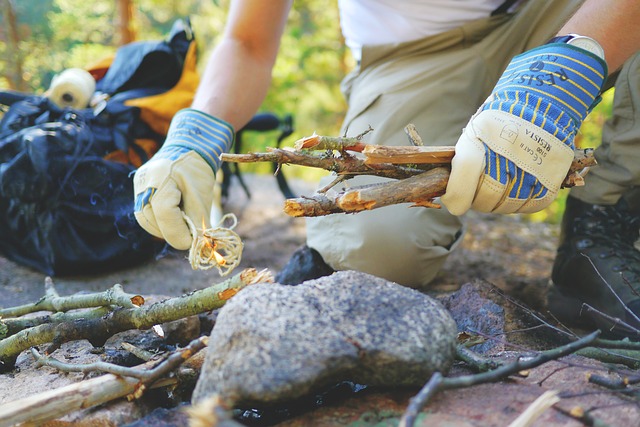 Creating a fire takes some finesse with the right elements of tinder, ignition and fuel.

Traditionally fire pistons were made entirely of wood and required a lot of craftsmanship to achieve the airtight seal required for ignition of the tinder. However, modern pistons are made of steel, aluminum, bass or even plastic. Rubber o-rings make the seal and modern materials such as cotton or char cloth are used for tinder.

While the science is sound, in a real situation using the piston is not as simple as it seems. Like all things it takes a lot of practice and experimentation.

The big advantage of the piston is that the outside conditions play less of a factor and it does not require a great deal of time to get an ember if don’t right. However, there are several things to be aware of when using it as your main fire making tool. First of all, like all machines it requires maintenance. The o-ring must be lubricated and if you do not push down as a straight angle the rod may bend or break, making the piston useless. Also, it does require very small and highly combustible tinder. The tinder that you can light with a ferrocerium rod may not light with a piston. You should look into what types of tinder work best and keep a good stock of them in your pack or on your person.

Everyone has heard of frying ants with a magnifying glass or seen a desert island show where someone has made fire with a mirror or a pair of glasses. The truth is that it is not so easy. It can take minutes to hours to ignite even the best tinder via this method. The lens should be at least X5 magnification and at large as is practical for you. The biggest draw back is the dependency on the weather. Also, this method is only useful during the day. To create enough concentrated sunlight to cause ignition you will need a highly polished surface or a decent, clean lens to focus the light. The light itself must also be consistent and focused on a single point. This will mean adjusting your position as the sun passes and keeping very still. A clear container filled with water can also achieve fire if the same principles are applied.

There are countless chemical combinations and electrical devices that you can use to make fire. Fire example a battery and some wire wool or aluminum foil. However, these methods are usually only suited to work once or twice before they are done. Other articles at www.theprepperjournal.com highlight some of these. For example: Sources of Tinder and Fire Craft in the Urban Environment by Mike Turner or How to Start a Fire with a Water Bottle by Pat Henry.

Three tried and tested methods of making fire out of nothing but what nature provides are the hand drill, bow drill and the fire plough. This is known as friction fire. While these methods can be extremely difficult at first and require a lot of knowledge about different types of trees and tinder sources they have been around since before the modern-day survivalist tools and gear began to make its make on survival. Articles and video links can also be found at the prepper journal site if you wish to find more information on these methods.

So when it comes down to it what is the best tool for the job?

This question could be answered by every single survivalist or prepper in the world and you still wouldn’t get a solid answer. The truth is, a good outdoors-man learns to be proficient in all means of fire craft. All of the tools above have their pros and cons but ultimately it is the user and not the tool that is at fault if you can’t get a fire going.

That said, in my opinion, I find the combination of the Swedish Ferrocerium rod, due to its superior grip and striker and a separate magnesium block to be a winning combination. The reason for this is that the issue of the surface area of the blocks rod is solved via the addition of a second rod. This setup gives you two ready sources of ignition and a tinder source that is not water sensitive. Even losing one of these tools still leaves you with a working method for creating fire.

If you do have the chance, it is always best to try to practice the primitive methods. By doing so you prepare yourself for loss of gear or simply being in a bad situation that you hadn’t planned for.

Grea article.
I’d go with a BIC lighter. If not available this article is spot on. I’ve been collecting dryer lint for nearly two years. Have tons of it. Keep some compressed in a plastic bag. Awesome tinder, just awesome. Thanks

Glad you enjoyed it Huples.

My mother uses egg cartons filled with lint and finishes it off with candle wax. leave to dry and then cut your portions and it’s easy to store.