How to Start a Fire with a Fire Plough 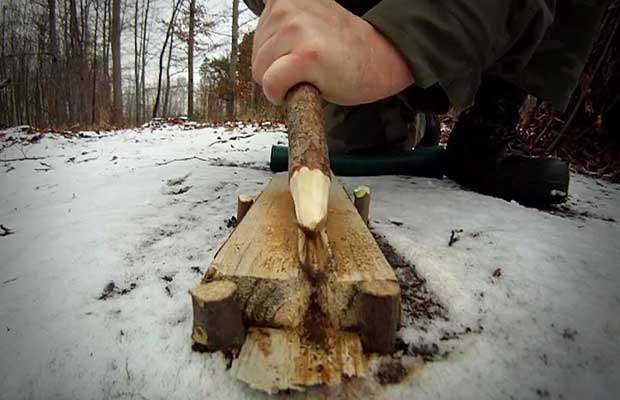 The sh*# has hit the fan and the power is out. Despite all warnings, you didn’t stock up on matches, lighters, or a flint. It’s getting cold outside, and you could really use a warm meal. What now? There are many ways to build a fire without matches or lighters, but in my opinion, the best way is to make a fire plough. While it does take some stamina, it is very effective.

One of my favorite survival movies is Cast Away in which Tom Hanks plays an everyday guy named Chuck Noland. In a very powerful scene, Chuck struggles for hours to make a fire using a bow drill. While that is a good way to build a fire, it is very difficult (as it is for Chuck in the movie). Finally he gives up on the drill and tries another method: the fire plough.
Follow these instructions and you’ll be warm and eating a bowl of hot soup in no time.

For a video of the same process you can view this below.

Skills like this are great to learn and practice. You never know when you’re going to be caught someplace even before SHTF where this will come in handy. No kidding when you say it takes a LOT of stamina!

Any task like this requires a knife, without one you’ll really struggle to make any headway.

IS THE PLOW ALSO YUCCA WOOD?

I think the fire starting skills is must know skills for everyone, the information you ar providing in this post is just amazing. Thanks for sharing