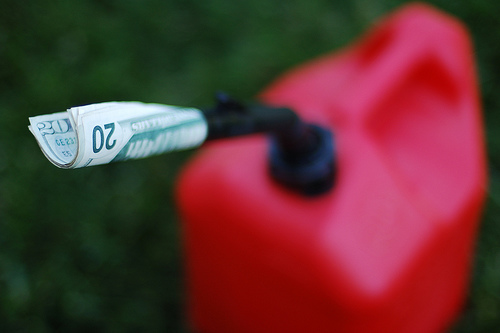 Something Borrowed…From the Ghost of Government Past

Editors Note: This is an article originally “published” by Jeffery Tucker of Liberty.me in 2012. The Prepper Journal is republishing it with some additional materials (and some pictures for flow and effect.)  I have sought the authors permission but have had no response to any inquiries. It stands on its own merit, even thought it was posted in 2012. As always, if you have information for Preppers that you would like to share and possibly receive a $25 cash award, as well as being entered into the Prepper Writing Contest AND have a chance to win one of three Amazon Gift Cards  with the top prize being a $300 card to purchase your own prepping supplies, then enter today!

“The gas gauge broke. There was no smartphone app to tell me how much was left, so I ran out. I had to call the local gas station to give me enough to get on my way. The gruff but lovable attendant arrived in his truck and started to pour gas in my car’s tank. And pour. And pour…

“Hmmm, I just hate how slow these gas cans are these days,” he grumbled. “There’s no vent on them.” That sound of frustration in this guy’s voice was strangely familiar, the grumble that comes when something that used to work but doesn’t work anymore, for some odd reason we can’t identify

I’m pretty alert to such problems these days. Soap doesn’t work. Toilets don’t flush. Clothes washers don’t clean. Light bulbs don’t illuminate. Refrigerators break too soon. Paint discolors. Lawnmowers have to be hacked. It’s all caused by idiotic government regulations that are wrecking our lives one consumer product at a time, all in ways we hardly notice.

It’s like the barbarian invasions that wrecked Rome, taking away the gains we’ve made in bettering our lives. It’s the bureaucrats’ way of reminding market producers and consumers who is in charge.

Surely, the gas can is protected. It’s just a can, for goodness sake. Yet he was right. This one doesn’t have a vent. Who would make a can without a vent unless it was done under duress? After all, everyone knows to vent anything that pours. Otherwise, it doesn’t pour right and is likely to spill.

It took one quick search. The whole trend began in (wait for it) California. Regulations began in 2000, with the idea of preventing spillage. The notion spread and was picked up by the EPA, which is always looking for new and innovative ways to spread as much human misery as possible.

An ominous regulatory announcement from the EPA came in 2007: “Starting with containers manufactured in 2009… it is expected that the new cans will be built with a simple and inexpensive permeation barrier and new spouts that close automatically.”

The government never said “no vents.” It abolished them de facto with new standards that every state had to adopt by 2009. So for the last three years, you have not been able to buy gas cans that work properly. They are not permitted to have a separate vent. The top has to close automatically. There are other silly things now, too, but the biggest problem is that they do not do well what cans are supposed to do.

And don’t tell me about spillage. It is far more likely to spill when the gas is gurgling out in various uneven ways, when one spout has to both pour and suck in air. That’s when the lawn mower tank becomes suddenly full without warning, when you are shifting the can this way and that just to get the stuff out.

There’s also the problem of the exploding can. On hot days, the plastic models to which this regulation applies can blow up like balloons. When you release the top, gas flies everywhere, including possibly on a hot engine. Then the trouble really begins. Never heard of this rule? You will know about it if you go to the local store. Most people buy one or two of these items in the course of a lifetime, so you might otherwise have not encountered this outrage.

Yet let enough time go by. A whole generation will come to expect these things to work badly. Then some wise young entrepreneur will have the bright idea, “Hey, let’s put a hole on the other side so this can work properly.” But he will never be able to bring it into production. The government won’t allow it!

It’s striking to me that the websites and institutions that complain about government involvement in our lives never mentioned this, at least not so far as I can tell. The only sites that seem to have discussed this are the boating forums and the lawn forums. These are the people who use these cans more than most. The level of anger and vitriol is amazing to read, and every bit of it is justified.

There is no possible rationale for these kinds of regulations. It can’t be about emissions really, since the new cans are more likely to result in spills. It’s as if some bureaucrat were sitting around thinking of ways to make life worse for everyone, and hit upon this new, cockamamie rule.

These days, government is always open to a misery-making suggestion. The notion that public policy would somehow make life better is a relic of days gone by. It’s as if government has decided to specialize in what it is best at and adopt a new principle: “Let’s leave social progress to the private sector; we in the government will concentrate on causing suffering and regress.”

You are already thinking of hacks. Why not just stab the thing with a knife and be done with it? If you have to transport the can in the car, that’s a problem. You need a way to plug the vent with something.

Some boating forums have suggested drilling a hole and putting a tire stem in there and using the screw top as the way to close the hole. Great idea. Just what I wanted to do with my Saturday afternoon, hacking the gas can to make it work exactly as well as it did three years ago, before government wrecked it.

You can also buy an old-time metal can. It turns out that special regulations pertain here, too, and it’s all about the spout, which is not easy to fill. They are also unusually expensive. I’m not sure that either of these options is ideal.

Who knew this would be a thing of beauty someday?

It fascinates me to see how these regulations give rise to market-based workarounds. I’ve elsewhere called this the speak-easy economy. The government bans something. No one likes the ban. People are determined to get on with their lives, regardless. They step outside the narrow bounds of the law.

It wouldn’t surprise me to find, for example, a sudden proliferation of heavy-duty “water cans” in 1- and 5-gallon sizes, complete with nice spouts and vents, looking almost exactly like the gas cans you could get anywhere just a few years ago. How very interesting to discover this.

Of course, this law-abiding writer would never advocate buying one of these and using it for some purpose other than what is written on the package. Doing something like that would show profound disrespect for our betters in the bureaucracies. And if I did suggest something like that, there’s no telling the trouble that it would bring down on my head.

Ask yourself this: If they can wreck such a normal and traditional item like this, and do it largely under the radar screen, what else have they mandatorily malfunctioned? How many other things in our daily lives have been distorted? If some product annoys you in surprising ways, there’s a good chance that it is not the invisible hand at work, but rather the regulatory grip that is squeezing the life out of civilization itself.”

I have include the original authors bio, without changes, but now without this comment “plain old Tucker does not respond to emails sent to plain old [email protected]

I’m executive editor of Laissez Faire Books and the Chief Liberty Officer of Liberty.me, an innovative private society for publishing, learning, and networking. I’m the author of four books in the field of economics and one on early music. My personal twitter account @jeffreyatucker FB is @jeffrey.albert.tucker Plain old email is [email protected]

Editors Note: Republished as food for thought . Of course his comment on “leaving social progress to the private sector” has since been disproved and certainly one can make a case against gasoline spillage and fumes, but not at the expense of degrading performance. This is the result of designing and implementing solutions in a vacuum. A lot has happened since 2012, a lot of things have changed, and there has been some reversal of “the crazies” but, then again the crazies are still in charge in so many places, protected by labor laws specifically designed to keep them from being weeded out, having to face the same review as people in the private sector. So new crazies are still producing….

Apologies for the fuzzy quality of the picture, you can look for yourself.

For not just preppers, but everyone, knowledge is always our first line of defense and keeping up with the crazies is a new career. Small, medium and large businesses have employees, or staffs of employees, that do nothing but “compliance”. As a friend told me once after driving from Northern California to Southern California with an unloaded 12 gauge shotgun in his trunk, a legally purchased gift for his father, that he was sure the number of county and city laws he violated on the drive was north of 50. BTW my recently purchased gas can has a vent installed, a small hole drilled and plugged with a shaved wine cork. A good prepper will always find a way, a good prepper will always check his stash and supplies …and will also hope the NSA misses this post.

so now i know what happened to those gas cans! bought 2 at walmart a few years ago and hated them! ended up pouring gas from them through a funnel into another can to then pour in a gas tank! i only use those POS’s to store gas in.

BTW – the Jerry Cans, the great metal ones you see for about $100 each, have a coating inside that prevents the can from reacting with fuels such as gasoline, kerosene and diesel BUT this coating is soluble in water so NEVER, EVER store water in one of these. They implicitly state that but sometimes we fail to read all the warning signs.