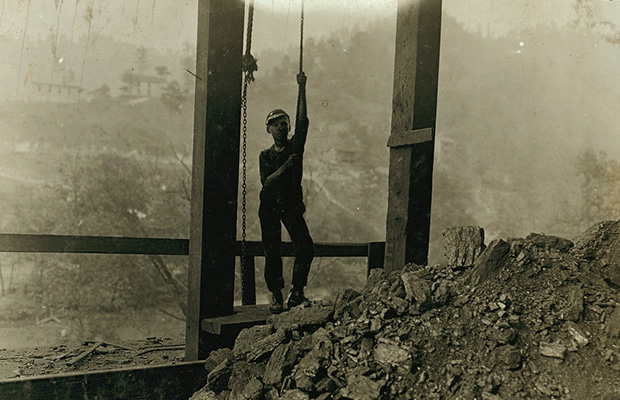 By Guest Contributor on January 5, 2016 4 Comments

Editor’s Note: This post is another entry in the Prepper Writing Contest from Stephen Fopeano.

Personal accountability and taking responsibility for your own decisions, is (or should be) central to any prepper. It is not as exciting as shiny knives, bug out bags or assembling a personal armory, I’ll admit. But every once in a while it is be good to do a reality check on the world around us. It might help us change our own bad mental habits.

The following are two pieces on the subject, each with a slightly different slant:

I like the “Remember When” column in the local country paper down at the cabin. Every week there is a news snippet from 10, 20, 40, 50 and 70 years ago. The 70 year paragraph has been progressing through the WWII years and it always makes an impression on me. Not just the prices and small town sensibilities, but the larger wartime effort. Things like mandatory blackouts with inspections, rationing of tires and butter, recycling unused rail to make ships and saving cooking grease to make munitions.

I wasn’t there so I don’t know for a fact how people felt about it, but these articles ring in a way that suggests pride. Nationalist pride in individual contribution to a much larger project. Boy Scout pride in collecting tons of scrap metal to build the navy. Victory Garden pride in growing more of your own family’s food so the soldiers would have what they need to fight on.

But something is missing now. There is no movement to help balance the budget by buying bonds. There are no patriotic scrap metal drives. We don’t save our bacon fat. There is no sense of the little guy contributing to any larger effort of any kind unless it is rain barrels, composting and recycling. It would be preposterous for the government to issue rationing books for anything. The rational response to the way things are going is to be a prepper, at least to some degree. 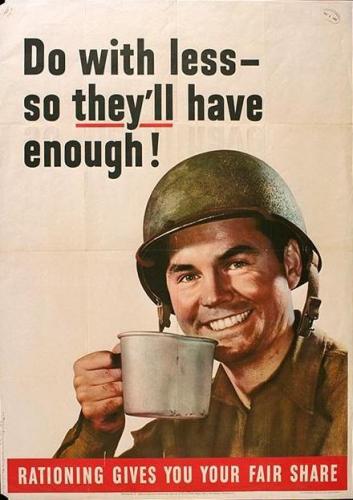 Why would I prattle on about such things? Because a seemingly unrelated incident in the news got me all fired up, and when a non-linear thinking guy like me gets going, there is no telling what direction it will be in.

The incident was the protest of a nurse, returning home from working in Ebola country. She was required, rightly or wrongly, by New Jersey law to be sequestered for 21 days (in spite of negative medical tests).

I am no fan of political solutions for a lot of reasons, and I have more than a little Libertarian in me, but I do understand the motive of not wanting to make Newark the next Ebola frontier. The logic by the decision maker was: “I’ll take the criticism of being too hard on this because it is better than the other way around.”

What happened? The nurse took it to court. Her rights were being violated. WTF? How is a legal solution arguing on behalf of an individual going to address the potential viral problem of the eastern seaboard of the US at the very least?

Could this have happened in 1944? Was there a seditious movement to hoard bacon fat? Maybe there was and the paper didn’t write about it. If there was an anti-war sentiment, I’ll be you it was based on moral grounds, not the assertion of individual rights.

The nurse’s litigation is a perfect gesture for these times. Draw your own conclusions.

One Sunday I went to a professional football game instead of the cabin. I try to go to one game a year, late in the season when the orange cheese like substance on nachos freezes and I have to wear 80% of the clothes I own. I get cheap nosebleed seats but wish I was in the bleachers where the real fans go in costume. If this doesn’t sound like a fun way to spend a Sunday afternoon, then no amount of narrative will persuade you otherwise.

This year I took it to another level. I parked at the far end of the lot and walked a half mile through a winter Mardi Gras. Tailgaters ranged from the open trunk in the back of a Toyota to a full-sized school bus converted to a very large dog. Flashy motor homes with pop out extensions graced the high rent section. Food was abundant – not just brats on a charcoal burner. Selections included grilled onions, mac and cheese, burgers, dogs, pulled pork and the like. Lots of it. Enough to feed the people of small developing nation for a week and/or jack their cholesterol levels to Western averages.

The partiers were, as you would expect, enjoying various states of sobriety. To service the drinkers’ biological needs, the city had the foresight to set out many port-a-potties. It was glorious. It was a celebration. A football game was just an excuse to party. The parking lot experience was more fun than the game.

By the time I returned to the party zone it was mostly empty. Of trucks, vans and partiers, that is. What was left behind was disgusting. Literally acres of parking lot were covered by red plastic cups, broken cheap awning parts, food even the seagulls avoided and smoldering charcoal dumps. Gleaners were out in force, filling shopping carts with blue and white aluminum cans.

It must take a significant amount of skill, energy and planning to put together a mobile party. How much more would it take to plan for dealing with the waste? What would it take to set up a recycling bag for the gleaners? There has to be some room in the back of the pickup for bags of red plastic cups and the like. What were they thinking? 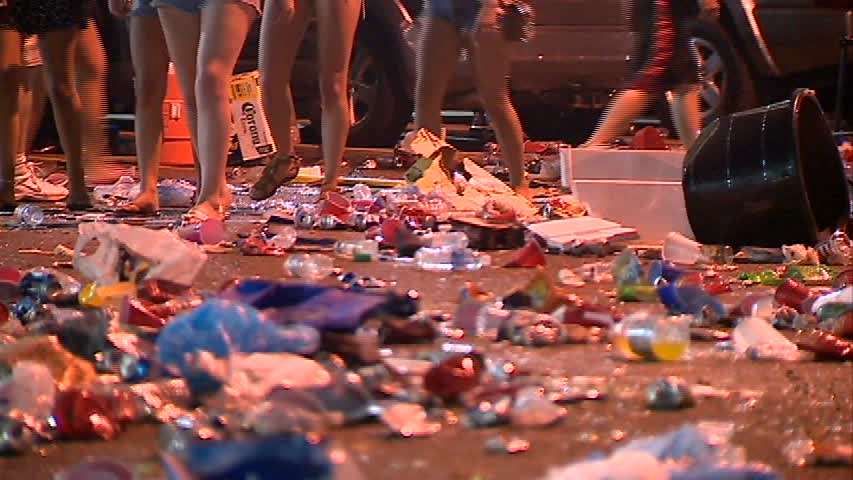 And that is the point. They were thinking they were anonymous and invisible and therefore not accountable. If the party were in their own yard, I suspect they would not have acted the same.

In the country you are neither anonymous nor invisible. I think most people have an awareness of place and respect for theirs, especially if they are farmers or hunters or preppers. You might see six rusted Ford F 150 pickups on the side lot, but they are for parts to keep the seventh one running. I see poverty and decaying towns, but I have yet to see littered and disrespected property. I have never seen anyone litter their property or public space, although there is the occasional Bud Light can here and there, tossed out by some bozo. But I cannot imagine any self-respecting hunter or prepper leaving behind a trail of flotsam or not feeling responsible for his/her own actions.

If you mess up, everyone will know it, even if they don’t know who you are. A poorly plowed field, inadequately tended cattle or crops not well-managed are obvious to others. And, I believe, that matters. If you mess up, you will know it and feel the consequences. At the football game, something short circuited. Fans thought they were anonymous, that no one would know who left behind mountains of shit. This left them free to make a mess. Or perhaps they thought they were invisible, that no one would see their actions. They were wrong.

Although preppers might sometimes prefer otherwise, we are neither anonymous nor invisible. We are proudly responsible for ourselves and are accountable where and when it counts. We know that we are the only ones we can count on when the SHTF.

Author’s Note: There are from “Dear Friends of Dog Wood Hollow”, letters written to and for family and friends, approximately weekly for the last seven years and still going strong. Dog Wood Hollow is my cabin/bug out getaway/homestead for future generations. My wife just calls it “The Stupid Cabin”. It is in southeast Ohio.

I don’t know what football tailgate party you observed – but that kind of post party trashed up venue isn’t common everywhere ….

I can tell you the parking lot tailgate area for the Chicago Bears looks better post party than before the fans arrived – it’s a matter of pride for true fans – and bears don’t crap in their own den ….

It is all about pride in self. No matter what the ‘neighbor’ does, we should try to set the example and “Leave No Trace” as we were taught and teach others in scouting. Prepping is about self-pride and we can do without the gov’t handout, or clean up. Being trained by WWII parents and family is not happening to the current generations.

Interesting article. I enjoyed the memories of the past eras and do agree with the second part of the article regarding the trash – it was a sad disgusting mess. However, on the section regarding the nurse and ebola, too much nonsense was made out of the ebola scare. I find myself siding with the nurse in her case. Had she been diagnosed positive with the illness or not previously tested, then perhaps I’d feel different. She had, however, undergone isolation BEFORE returning to the US and most importantly had TESTED NEGATIVE for the illness not once, not twice, but… Read more »

As a nurse I agree. MDs should have had more say than a politician in this case. It was stupid to ignore medical advice and the fear without knowledge response was unhelpful