Bug out Bag on a Budget

Editor’s Note: This post is another entry in the Prepper Writing Contest from T-Man.


I want to first thank The Prepper Journal for putting on this writing contest to write your own article, for anyone to submit to it, not too shabby huh?

Meanwhile, I’m here trying to gather my prepper supplies to create my Bug Out Bag as cheaply as possible because mainly we live paycheck to paycheck. As it turned out I already had a shelter element in my garage, a tarp, to which I have no idea of size other than to say it is pretty large. So step one I added it to my free fire service advertising back pack (pretty darn durable at that). That’s when I started looking online for the best prepper/ survival stuff at the lowest price I could get it at.

I did buy a stainless steel cup in order to boil water when needed, but then my wife somehow won a water bottle of the same material as my cup, bonus, so of course that was added. Then came the item I wanted to buy for a few measly dollars, a survival bracelet with a Ferrocerium rod and striker, add some cotton balls, and bingo, I have a way to make fire, (depended on me learning how), but that was accomplished by a parks and rec. class for survival, a challenge type game. Took us a bit to try the fire starter rod, thankfully they had cotton balls and the fire roared to life, never felt so excited in my life, I made fire without a lighter. I know from online articles it will be harder in harsher climates to get fire, I did also read about using petroleum jelly to extend the burning of a cotton ball, more knowledge!

Putting my bug out bag together 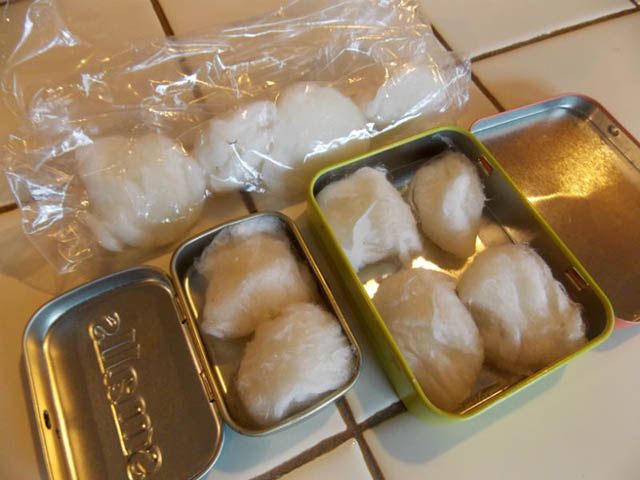 Cordage was my next item needed and it was a good thing I have some utility rope lying around, not quite paracord but alas, my daughter has about 10 feet of craft paracord(I know I know it’s not mil-spec but will work in a pinch). Another good thing – a friend had a garage sale, her husband had some used military surplus, to which I relieved them of.

I had purchased 10 MREs for next to nothing, picked up a brand spanking new pair of combat boots, a little pricey, but better than the $240.00 price that they go for on some sites. Picked up a few more miscellaneous items, one of which I’m not real sure what I’d use it for, a slender military bag around 6inches wide and about maybe 10-12 inches long. Sat there with it for a while, and eureka, my new place for a tarp, rope, paracord, plus got to use the MOLLE straps to secure it to my free back pack, with a cheap little carabiner clip to hold it tight.

I started looking around the house for other things to re-purpose. Have some bandanas in my Bug Out Bag for various things I’d read about – making char cloth (not yet attempted) filtering debris out of water, making a sling for an injured arm, bleeding etc. I also placed some old skull caps in there as well, not too sure what other things they might be good for, besides covering my head, but I got them. Fishing? Well there are a number of safety pins, to use for the normal uses for, plus, I can use the loops I found out for eyelets for a pole, wow imagine that?

Did I mention that I have a knife sharpener? I do but at the time all I had was a cheap pocket knife. What I needed now was a genuine Bushcraft survival knife, and wow had no idea they were that expensive. Some were a couple hundred bucks. Back to the trusty Internet, to search for the cheapest knife, while maintaining ruggedness. What a chore that was, i came across a nice knife, not to pricey, about $60 and the reviews were good, by far the most expensive part of my gear now.

A year or so ago we had a friend give us a vacuum food sealer, never thought much about it, but now, I have used it a lot. I sealed up some dried 15 bean soup beans and seasoning (my first food pile) after which I took regular dried pinto beans, sealed them up too. Placed some salt and pepper in the tub with both beans, used a straw and learned you can seal one end with a pair of pliers and a lighter. This makes an excellent seasoning pouch for food storage. Threw in some protein bars as well, sealed them too.

For my water storage, I was able to obtain at the fair price of $2 each, some food grade 5 gallon buckets, So what if they reeked of pickles for a month or so LOL. After airing them out and a good cleaning with soap and water, a little sterilizing with water and bleach, I now have 30 gallons of potable water stored up.

Well what else should I get, hmm oh I could use a good compass, but the dilemma on price again. Compasses range from a few bucks to well over $30-$40. Are the more expensive ones better? Do they read north more accurately? That I don’t know. All I guess I’m going to try to do is get a cheap one for around $3, hope it works well.

As you can guess I do try to make out as cheaply as possible, sometimes, it does make me wonder if all my prepping/survival will be enough. But I still plan on reviewing items online and if for some strange reason I get lots of money then I could buy one of these prefab kits, well maybe not, I’ll just go for the more quality gear. Any way you look at it, from the readings I have done, they “Say prep for your environment” so I do have more needs, living in a snow belt. I will need layered winter outfits for my wife and kids, as well as me. Winter gear has many selections, depending on what type of coat for everyone; do I try to find cheap winter gear at one of the thrift shops? Only time will tell.

Well that’s it in a hand basket, what I’ve gathered for my BOB as well as the start of prepping, I’ll just keep adding bit by bit till I feel I’ve gathered enough for my family to survive on.

If you want BOB supplies on the cheap, head to your local dollar store. I’ve found tons of great items for a dollar. (Small clip-lock containers for fire kits, zip ties, duct tape, notepads, pencils, pencil sharpeners (shavings make great kindling), cheap utensils for food kits, ziplock bags, batteries and first aid supplies (I completed a cat BOB at the dollar store, spent less than $10, minus the carrier which I got for $3)
Also, if/when you eat out at fast food places, grab extra salt, pepper, catsup, straws and utensils.

I get a lot of supplies at the local dollar store. The foil packs of salmon are lightweight and a good protein source for BOB. I was able to get everyone in my family a good quality mess kit at the local thrift store for around $3 each. It just took diligence to keep checking back to see if they had any. One here, one there and in a couple months I had 6. I have vacuum sealed instant oatmeal, instant rice with bouillion cubes added and powdered eggs with dried peppers and onions a more nutrious scrabled egg. When… Read more »

I was wondering how to make powdered eggs. The cans of them that I’ve seen online are so expensive. Thanks for the info!

Hey, hello, hello T-Man! Feeling proud and happy for you on your behalf even if you’re not especially proud and happy with yourself. It’s not the money that we have but the resourcefulness we possess that will see us through whatever life brings. IMHO, there are many who have bought all the right things and possess all the right resources but still crumble when faced with adversity. Clearly you’re one who is working on using the resources at your disposal to your family’s best advantage. There is an art to knowing that if you’re knocked down you’re going to get… Read more »

I wanted a single metal container for my bug out bag to cook in, drink from, eat from and if necessary wash up in, I saw all sorts of fancy and not cheap cooking systems but in the end I bought for the equivalent of $2 a stainless steel rolled edge dog bowl, its great for cooking on open fires, irs large base makes it stable, a length of insulating tape round its rim allows me to drink hot liquids from it, and with it being highly polished its easy to keep clean. I just added a disc of stainless… Read more »

Good thinking! More proof that you really can build a BOB without having to invest large sums of cash. There are some things that you don’t want to go cheap on, but many items can be acquired very economically.

Very informative. I like your use of repurposing things you already have. I too, am new to prepping. I’ve been taking down notes of my own & your story has inspired me to submit something of my own very soon.