Editor’s Note: This article was generously contributed by Bill Crozier and discusses his preparedness journey and the assumptions of friends and family given his experience as a military veteran.

Like many of us, the idea of becoming a prepper came gradually.

Living in South Florida, hurricanes were always a thought no matter what we did. Even as a child, I can remember “helping” my Father build a new fence in the back yard and he would remark that the fence would not stand up to a Category 2 hurricane. Everything we did had a hurricane in the back of our minds.

Later, I joined the United States Army and prepping took on a different meaning. Obviously, staying in physical shape was a daily routine however; we were always ready to go at a moment’s notice. A “B” bag was packed should the need arise and my LBE (Load Bearing Equipment) was in a constant state of readiness.

After leaving the Military and settling down into an office job, wife, kids and the American dream, I eventually took notice of the things around me.

Violent crime was going up while normal security was going down. Then, the 2004 Hurricane season hit us. I was without power for a total of three months. Fuel was difficult to obtain and I discovered that you can only eat so much peanut butter and jelly before you start to hate food in general.

More than that however was how rapidly law and order broke down. The local neighbors did get together and shared the perishable foods on a BBQ grill and we all kind of hung out together outside (inside the homes were stifling because of the heat) and we took notice of strange vehicles slowly cruising the streets near us. The criminals were out before the winds fully died down. As a Veteran, I felt confident that I would be able to defend myself, my home, and my family with the training that I received from Uncle Sam. I had my AR and lots of ammunition. I had already surveyed the surrounding area and decided what made for good cover, concealment, and, if needed, a good shooting platform from the advantage of height.

Fortunately, I never had to put this into practice. Years later (well, a few years ago), I decided to get serious about prepping. As I stocked up on a few extra firearms and many thousands of rounds of ammunition, I felt good about protecting my family. I taught my wife and my son how to shoot, reload, and clear every firearm we have. I decided where the best and worst places were to defend my home. I was a Soldier. I was part of the best Military fighting force that the world has ever seen. I have been trained to do exactly what I was preparing to do.

And then it hit me. What am I going to do about food and water? Yes, I can stockpile both but, that will eventually run out.

I decided to take an honest assessment of my Military background and, what I discovered scared me a little bit. 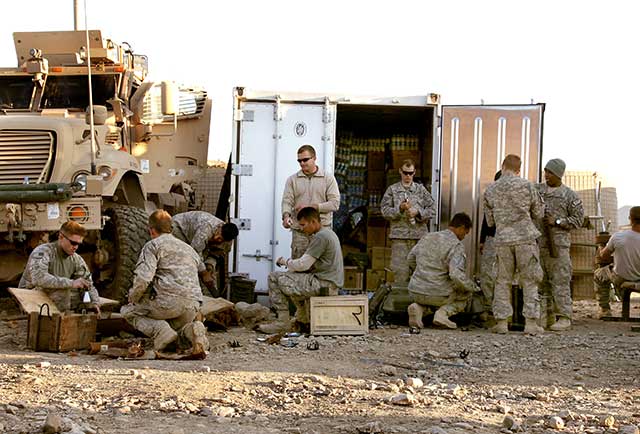 Our military relies on an incredibly vast system of supplies and logistics to function.

In the Army, I was part of a team. A LARGE team complete with food and water support, medics, artillery, air support, and about 1,000 other guys fighting along with me. In my house, I have none of that. If I get hungry, I cannot simply go to the mess tent and eat and drink. If I get wounded, I cannot go to a medic and get treated. If I need clothing or equipment, I cannot go to the supply room and get more stuff and if my weapon breaks, I cannot hand it to the armory and let them fix it. All of this I would need to do on my own.

Contrary to popular belief, the Military does not generally teach you how to treat water to make it drinkable. They don’t teach you how to hunt (for that matter, you only get trained on a handful of Military weapons). Sewing, food prep, all of the BASIC survival things needed are not taught.

Now, I am not saying that Soldiers/Veterans are helpless. Far from it. One thing that most vets DO have is a “Can Do” attitude. They don’t just roll over and quit.

My point to all of this is that, don’t look to the Veteran and think that he or she can do it all. In the movies, Rambo can fly a helicopter just as easily as you or I can drive a Honda Accord.

Navy SEALS can pick locks, make bombs out of Brillo pads, and use a paper clip to build communications equipment. In reality, unless a Soldier has been specifically trained in a specific skill set (mechanic, cook, medic, etc), they are just like everyone else.

Here in the office, we do talk quite a bit about prepping and, for some reason, people look to me for advice. They seem surprised when they learn that I have never been hunting. (I plan on going next month for the first time). They are shocked to learn that I do not keep my SCUBA gear in my Jeep at all times, aired up and ready to go. I don’t have some kind of really cool 2 way radio that I can use to call in for gunship support.

The Veterans that you interact with every day are just like anyone else. We are all trying to do the best we can with the experiences that life has given us. While it is OK to look to your friends for support, don’t make the mistake of thinking that your Veteran buddy can do it all.

Thanks for your service Bill, but you’re giving away our edge! 😉 I quite enjoy everyone expecting me to MacGuyver situations or making them think twice about underestimating me with a deadpan delivery of some outrageous or violent statement and a half-crazy twinkle in my eye. Keeps them on their toes. But in all reality you’re dead on. My seven year old son is learning more outdoorsman ship skills in cub scouts – hell even my five year old daughter in Girl Scouts at times – than I learned in the Corps. I’m learning as much as they are in… Read more »

There are some ex military who have the same mindset you used to have. They know how to use their weapons effectively and consider that is all they need for survival. Some of them do learn woodland survival skills and they consider themselves fully prepared since they will just hunt for the food the family needs. I won’t just subscribe both types as ex military because there are a lot of hunters who are proficient at shooting and hunting also. These people scare me the most. They are skilled with their weapons but have no clue how to feed their… Read more »

I fear the day that I have to decide between using my military skills against my fellow man for a can of peaches for my starving kids.

Know anyone interested in land in WA state? 2.5 acres $25k hunt fish saltwater and fresh, half wooded, excellent growing. Very experienced neighbors with skills in a 2A friendly area. The land is not mine-it’s in my area. Love to recruit like mindeds. Can teach you the peaches part.

I hope everyone understood the peaches reference. The reality is that when the food runs out, man will turn on man. We all want to think that we’ll be sitting cozy in our homes, with shelf upon shelf of perfectly preserved food, but the reality will likely be different. Whether its you defending yours, or attacking others for theirs, we’ll all find out what kind of Soldier we are, were, or could have been. As for WA state, I have lots of people up there. I am looking for property, but thinking east of the mountains. Teanaway, Umtanum, Okanagan, or… Read more »

I totally understood the ‘peaches’ reference. btw we meet Rawles specs on location-too far out for the FreeShiiteArmy

It seems the me that you really hit the most important ‘advantage’ a former Soldier/Marine has over the common man…the ‘can do’ attitude. It was beaten into our heads from day one to never quit, and if option A doesn’t work, find an option B and ‘git ‘er done’. Since I’ve taken the position that my people and I will survive, I’ve learned that there are so many things I don’t know. Like you, I’ve never hunted. I haven’t fished in 30 years. I haven’t grown a crop in 35 years. I haven’t cut down and chopped up a tree… Read more »

I also am an ex soldier, but kind of new to prepping but I think we all need to keep learning new things everyday or we might just get to RUSTY , I have copied and read a lot in the last few years on these websites and hopefully I can make a difference when the time comes,

The sad thing is as a Veteran I have trained myself in ALL OF THE ABOVE. Survival school was very valuable. More importantly the people WILL look towards old soldiers to save the day and provide training. You might be surprised at how important knowing how to slaughter hogs really is. Plant identification and natural medicine. More importantly is recognizing and identifying the enemy. He smiles a lot and is willing to shake your hand with a smile. He dresses well and speaks eloquently. He brings small gifts and big promises. And when you turn you back he stabs it… Read more »

Good Article! One thing that infantry forget- there is a the BIG support team that keeps them ready to go. I think the last tally on support is 40 to 1. When prepping, you wear many hats. You are the- Sanitation specialist, medic, water purification specialist, power generation specialist, fuel handler, driver, mechanic, armorer, supply SGT, mess SGT, warehouseman, signal specialist, carpenter, plumber, electrician, mason, soldier. You also wear these other hats- farmer, gardener, veterinarian, hunter, trapper, fisher, seamstress, lumberjack, distiller, brewer and many other disciplines to be performed when the need arises. Recognizing these as skills to have is… Read more »

Great points Herman. That and some good printed reference material will make that can-do attitude even more successful.