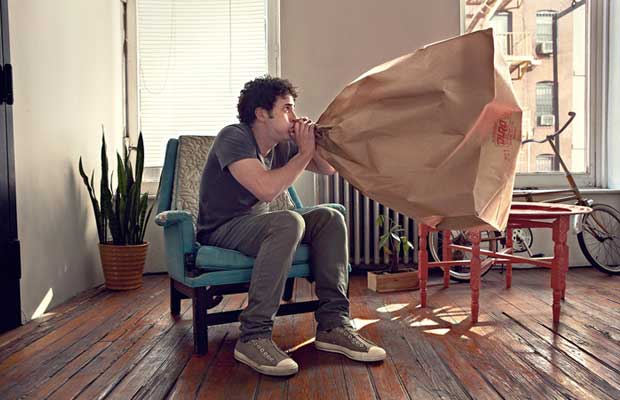 There’s been a lot of conjecture, gossip, and rumor surrounding Ebola in our country lately. How much is true? Who’s “fault” is it? Can we trust the government? How can I avoid it? These are questions running through our nation’s minds and the answers are up to each of us to determine for ourselves. In the end, we are all responsible unto ourselves for our own survival. We know this intrinsically, and self-preservation is perhaps the largest motivating force behind Prepping. Even if the government with all its brain power and financial resources could take care of us, we don’t believe it should, and when government fails or when we perceive it as inept or devious we rightfully retreat from its grasp. But in our quest to keep ourselves safe, is there a point when we step through the looking-glass and become paranoid?

In my work as a 911 dispatcher Ebola has taken a front row seat in our conversations as well as in the form of CDC training emails and other information from higher up in our chain of command. Our focus is how to limit Ebola’s impact on our local public safety agencies if it happens to strike in our neck of the woods as well as how to handle it out amongst the public in a safe and responsible manner. A couple of my coworkers are Preppers as well and we have our own discussions about working together, stockpiling resources, ensuring we pass vital information to each other, and determining how we can augment our dispatch center’s protocols to help keep us all safe. We consider these things as natural as breathing not because we are afraid, but because we see logical value in taking thought-out, reasoned steps to safeguard our loved ones against potential threats and unknowns.

As we enter traditional flu season, many people are worried about being able to effectively detect Ebola since its earliest of symptoms are flu-like. One of the early symptoms is a fever which can be beaten with Ibuprofen, Tylenol, or aspirin while still leaving the person contagious. In particular, given that I live in a tourist town and we are in the middle of the annual Huntsman World Senior Games (think senior Olympics) a concern has arisen that people with potentially compromised or suppressed immune systems (due to natural processes associated with advanced age) could be traveling into our area from all over the country or even internationally. Are we getting folks from Sierra Leone signed up to do pickle-ball? No. But we have people from Canada, China, and the Caribbean and who knows if they were on any of these flights with afflicted Ebola patients or with people who came into contact with them. Is this a rational concern? The CDC says they’re monitoring and in contact with people whom they believe are at risk, but the “monitoring” and quarantines imposed have been broken by people, including trained doctors because they were tired of it and wanted to go get some soup! You tell me if it is a rational concern.

According to my own unscientific anecdotal observations there appear to be three schools of thought regarding Ebola:

It seems to me that our Federal government espouses the first school of thought via the President putting on a public facade of “everything’s groovy man, things are under control”. The CDC is also to blame for continuing to preach that Ebola is not transmitted via air and even contradicting themselves about whether or not it is when eminent doctors caution that it is airborne and there was documented proof that in 1989 Ebola was known to be airborne in a lab mishap in Virginia. This sort of head-in-the-sand denial about the potential for Ebola to get worse is why we still haven’t banned flights from infected countries. However, to the President’s credit, he skipped fundraising to have a cabinet meeting about Ebola and House Speaker John Boehner has begun calling for that travel ban.

As far as the “PANIC!” school of thought goes, I think we Preppers often get blamed for it (whether we’re panicking or not) and we certainly can fall victim to hysteria, even more than the general public because of our hyper-vigilant mindset. Already we have seen a woman wearing a full hazmat suit to the airport and an airport worker forced to remove mask and gloves or be fired out of fear he would spark a panic. Sales of masks and “survival kits” are on the rise in both Britain and the United States. Keep in mind that Prepping is supposed to give us an edge for these sorts of scenarios so that we don’t have to panic. I advocate having health care supplies, but it’s not time to lock ourselves in the bunker just yet. 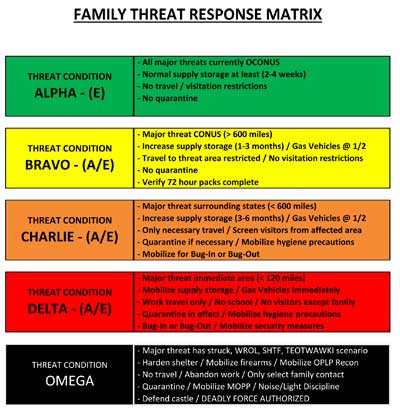 The most logical way to go about any problem, large or small, while having the best outcome is to think it through rationally. We still have time to do this and we should do it and encourage all the people we know to do this. As the saying goes, “you can lead a horse to water…” and so it is that not all of our friends and loved ones will heed our advice, but at least you tried. I believe the best way to approach this Ebola outbreak is to make the proper basic preps: Water, Food, Hygiene, Security, etc. I also believe it is important to have a threat response matrix which addresses your unique needs and abilities, concerns, politico-geographical area, and is flexible. This tool simply puts to words possible problems and your responses to them in a clear manner which is easily understood and adhered to by people you’re taking care of. There’s no time like the present to prepare because you don’t want to be in the middle of something terrible and wonder “Will my kids have enough to eat?” or perhaps a family member breaches protocol by bringing in an infected neighbor out of compassion because they didn’t know about your rules since they weren’t printed. I made one up for my family when Ebola first came to the US and my wife thought it was overbearing, scary, and more than a bit ridiculous. Having served in the Marine Corps, I thought it was the perfect tool for the job. We’re still working that one out, but rest assured I will see to it that we’re prepared.

Listen to your Gut but Temper it with Reason

I’ll close with a news article I just read after a work discussion on this topic, both of which moved me to write this article. It does a very reasonable job of putting into perspective our natural ability and inclination to use emotion for decision-making when there are unknowns (something nature has wired into us and has been useful for eons) and our ability to rationally think through problems when evidence is presented.

Some good points are made:

FDR once told us that “…the only thing we have to fear is fear itself.” That might be a bit of an understatement, but the principle is sound. Nothing spreads faster than fear and gossip about the unknown. If we allow hysteria to consume us we will be destroyed faster than if we caught Ebola.

What really concerns me, more than the Ebola virus itself, is the potential use of existing Ebola hysteria by the administration and other Progressives/Statist as an excuse to further expand governmental power & limit personal freedoms. Martial Law isn’t completely out of the realm of possibility, in order to “maintain order” and “protect public health” for “the duration of the current health emergency”.

Particularly given the twin threats of Obamacare and the President’s penchant for extreme, overreaching EO’s.

Remember, this is the administration of “Never let a crisis go to waste.” Because “It often enables you to get things done that you otherwise wouldn’t be able to”–Rahm Emanuel

Larry, I think you’ve got a valid concern. Only time will tell, but that’s why prepping now will help us for when shtf. Thanks for reading!

I avoid hysteria by keeping things in perspective. Influenza and Tuberculosis killed millions in the US alone why back when. Ebola isn’t something I remotely worry about because it doesn’t affect a lot of people all at once. Now, you shut down the power to all of the US for over a week, and you’re going to see some interesting times. You have a Jericho-level event occur, and it’ll be time to spin into action. There are a lot of things that I’m concerned about. Ebola isn’t one of them.