Are Preppers Really to Blame for Ammo Shortages? 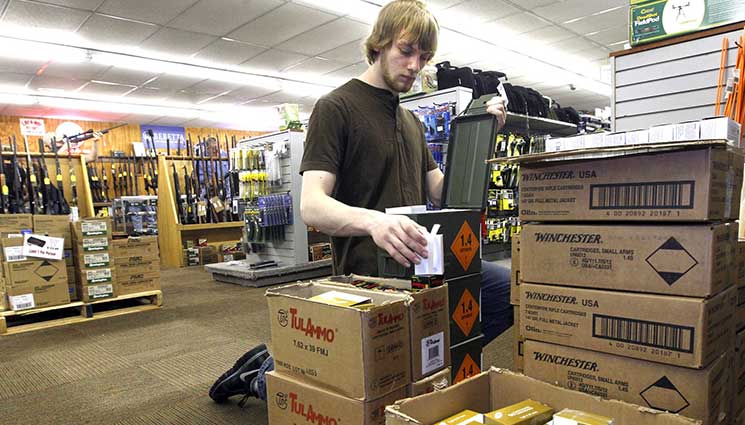 The other day I was in my semi-least favorite store, Wal-Mart. I say least favorite only because every time I go there I get the experience I deserve for the price point I am willing to pay.  Part of this is my fault though and it would help if I didn’t pick ridiculously busy days to try and go shopping. As luck would have it I had a day off last week and foolish me thought that shopping on Labor Day would be a good idea.

This turned out to be the very opposite of a good idea; a swift boot to the head would have been over quicker and would end up being less painful. As you may imagine, the store was crowded with families of parents and their children who were off work like me and out of school. Why did I think this was a good idea? I say it comes down to my shopping inexperience. I don’t shop that often and usually prefer conducting business online to going to the stores. You won’t get me within a couple miles of the mall around Christmas time, but I am not savvy enough to realize that you shouldn’t go to one of the busiest stores in town on a day when virtually everyone is off for the day.

My list of items put me back in the Sporting goods section as it usually does and as I walked down the aisle I could see over the counter the nearly empty case of ammunition. I detoured a little when something flashy caught my eye and was studying the knives when a man came up to the counter and started speaking to the employee working there. I overheard the man asking for .22 ammo and the inevitable conversation began with the clerk telling him that they were all sold out. The man started asking about when Wal-Mart would get more, how much they usually got when it did come in, what days the shipments were and the usual. These are all obvious questions that I bet that poor clerk has had to answer a billion times since the ammo supply dried up.

I half listened to the conversation just so I could hear what the clerk would say but then the man said the words that prompted this post. He said “It’s all of those crazy people who are stockpiling ammo. If they would just buy one box when they need it we wouldn’t have this problem.”

Are you crazy for buying ammo?

There is a trend that has rubbed me the wrong way for a long time of blaming preppers for one thing or another. I don’t know if it should, but I’ll just say what is on my mind. Buying more than you need at any given time is not crazy and it isn’t hoarding. If you listen to people like this we should only buy one little box of ammo when we are going to the range. I guess by that same token we should only buy as much food as we need to last a day. We certainly should only have enough gas to get us to where we are going and we would only get the minimum of anything so we wouldn’t infringe on anyone else getting what they want.

If we would only limit what we purchase, then they could buy as much as they needed whenever they want and they wouldn’t have anything to gripe about. This sounds like sour grapes to me and it isn’t just coming from your friendly neighborhood Wal-Mart shopper, the NRA themselves is taking this same position on the shortage and blaming people who chose to stock up for the ammo shortages.

In a recent article in American Hunter magazine, an NRA publication I receive monthly with my membership; I was pretty surprised to read that the Federal Government’s purchase of over 2 billion rounds of ammo so far had little if anything to do with the 2013 ammo shortage. The writer, Jon Draper went on to paint the “rumor mill” which was running on stories from the internet. He says, “The Internet is awash with reports of large acquisitions of ammunition by government agencies”. It is curious to me that the NRA would try to color stories about this fact as a “rumor”.  The information about government purchases of ammunition is widespread and well documented. This isn’t a rumor NRA, it is an undeniable fact and it is pretty unsettling to see the NRA taking this stance against their members and aligning themselves on the side of those who say that anyone who accurately describes what our wonderful Government is doing is a “pot-stirrer”.

They are essentially saying that domestic Government agencies like the NOAA and the Social Security Agency arming itself to the teeth with hollow point bullets is no big deal. They do eventually concede that the government “has bought a lot of ammo” but they quickly sweep this under the rug and drone on about “Supply and Production” and “futures contracts in commodities markets”.

After they dispelled the silly “rumor” about the government being at fault, they painted the real problem as “average customers” buying “10 to even 15” boxes of ammo and selling them for a profit. They also say that an increase in the amount of target shooting is another factor driving this shortage.  Are you serious?

I understand market economics fully play a part in the shortage of ammo, but to completely negate continued purchases in the millions seems to miss a vital point here and I am just a little concerned that this is coming from of all places, the NRA. I think the blame for any shortages has to fall on the people or persons making the most purchases. It isn’t the average prepper buying a box or two, it’s the government buying a billion or two. Whether or not you can rationalize why they must have those rounds is immaterial, they are still taking them out of the supply chain. That dries up stock and creates a shortage and the costs go up.

Now with that said, why are people still buying ammunition as soon as they can? If the supply is low and the price is high, shouldn’t the demand go down? Not in this case because the same people you blame for buying whatever they can get their hands on have a sneaking suspicion what the government plans to do with the ammo they are buying and they want to make sure they can at least show up to that fight.

Fear and paranoia might be fueling some of this demand, but I don’t believe it is completely misplaced. Rather than complaining that you can’t find some .22 at the old prices of $5 a box, maybe you should just accept the prices have increased and buy some if you need it. Wal-Mart is not the only place that sells ammo. Complaining wont get you anywhere and you can find ammo online at a lot of places. That reminds me, I need to make another order for 250 rounds of 9MM myself. See you at the range!

All the ammo manufactures are ON THE RECORD saying that the government isn’t buying any more ammo than normal and Obama isn’t telling them to make less.
Hoarders, preppers, and resellers are the #1 reason.

I’ve run into this myself. For awhile I was able to get steel case 9mm at WM for a decent price of $11-12/box. Not anymore. Now, it’s a crapshoot; it all depends on whether I show up at the right time on the right day of the week. I can still get brass cased 9mm at my local sport shop (usually) for around $24-26 per, with a limit of 2 per customer. I’ve been looking at online sites and ammo auctions, but the prices I’ve seen so far haven’t been that much better. Although, you can make purchases in case… Read more »

Larry, I have come to pretty much the same conclusion on reloading. If time and money were no object I would definitely do it, but the entry point is high enough to make me reconsider. Yes, I know that with the brass and supplies you could make your own rounds, but that to me seems to be more aligned with getting highly specific and custom rounds for your firearms. That is great, but I am looking for quantity at this time and reloading doesn’t seem like the best fit for me. I would rather take that money and buy more… Read more »

Survivalists/preppers,NO…The blame lies on and IDIOT of a president,that wants to disarm the citizens,for a complete government take over..I think that if that attempt to take away our guns by force or trumphed up laws will result in a civil war that will make the first one,look like a walk in the park..

I think you are right, but I also think they are smart enough to know that. I don’t think they want anything as slow as that and they are looking to speed this process up with something major. Something so crippling that people won’t be able to fight.

I think it is a combination of “all of the above”. Citizens are certainly partly responsible for the current ammo shortage. I don’t think that the government is causing the current shortage of .22LR cartridges. But then again, can you blame people for buying up ammo when states like NY pass laws that require a NICS check for each ammo purchase? So starting in 2014, if you live in NY and want to buy a $6 box of .22LR cartridges to plink at the range, you have to pay for a NICS background check. Naturally, people will buy bricks of… Read more »

You bring up a great point about the hypocrisy of laws and the lawmakers who foist them upon us. I think it is a crime that anyone who makes a law can exempt themselves from that same law. Its the same with police officers, if a limited capacity magazine is “all we need” then they should have to play by the same rules too.

“average prepper buying a box or two?” right… Because that’s what Doomsday and Zombie Apocolyypse peppers (who we used to just call rednecks, before the PC age) do, they just buy a few things of everything. They don’t buy a LOT ofspecific things, like what they feel are necessities, like guns and bullets. Lol 40% is prepped, 40% is the concealed carry craze, and 20% is market manipulation for political purposes. The government has jack shit to do with it. Fear, paranoia, hatred, and machismo, period!