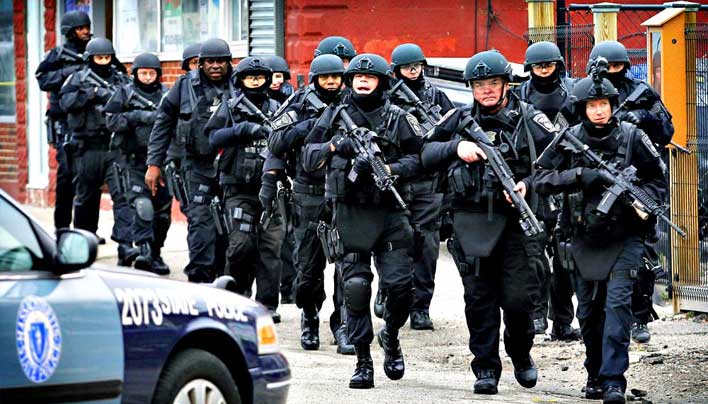 I am not one to engage in conspiracy notions regarding the recent Boston Marathon bombing.   I have heard theories concerning the facts and have seen the photographs that seem to point to, as some would hypothesize, that either military personnel or shape shifters may have been the culprits.  I am concerned, however, with the undisputed facts that I know to be true.  The following quote comes to mind, “Those who give up their liberty for more security neither deserve liberty nor security.”  Benjamin Franklin could not have been more correct in the vision he had for his own time as well as for our current crisis.  I have taken in the scenes depicting the citizens of Boston acting more like “sheeple” than citizens of a free nation while military-style uniformed police with fully automatic weapons in armored vehicles lock down their city and patrol their streets.

Let me put you in the shoes of scared and utterly helpless citizens who willingly hand over their rights guaranteed by our Constitution for a moment.  Let’s call our terrified citizens Bob and Jane Smith.  They are a lovely couple.  They give to charity, pay their taxes, and are both on low cholesterol diets.  Since the moment of the bombing, these two Bostonians have been doing what any good law-abiding citizen should do; they have been glued to their televisions watching the endless coverage of this salacious tragedy unfold on network news.  The media has embedded in their brains that there is a dangerous, crockpot wielding lunatic out on the streets of Boston somewhere and he could terrorize anyone at any moment.  He is a trained foreigner with blood thirsty eyes and he will kill anyone twice that he comes in contact with, especially those on low-cholesterol diets.  Bob and Jane are helpless.  They have no protection except some dull kitchen knives and they don’t want any trouble because Bob has developed a heart murmur and anxiety attacks since the bombing.  Suddenly, there is a knock on their poorly secured door.  Jane volunteers to timidly peer through the peep hole in their door because Bob is sweating and hyperventilating.  And what to her wondering eye should appear but the “law” dressed head to toe in full military gear and endowed with assault weapons that would make most in Congress gasp for air.  Jane, with a sigh of relief, throws open her door and her heart to her saviors.  Without so much as removing their helmets, Jane and Bob are instructed to step outside of their home so these “knights in shining armor” can unlawfully search their home without a warrant, probable cause of any crime, and with no evidence of any criminal harbored inside.  And thus, Martial Law has been ushered into a city, a city that symbolizes our country’s fight for political and religious freedoms, without so much as a whispered, polite objection.

I love the poem, “Paul Revere’s Ride” by Henry Wadsworth Longfellow so much that I made my kids memorize it just so I could hear it over and over again.  The last stanza stands in stark contrast to what has happened in Boston since April 15th and the quiet obedience in which its citizens succumb to the degradation of their rights.  Here is the stanza:

So through the night rode Paul Revere;
And so through the night went his cry of alarm
To every Middlesex village and farm,—
A cry of defiance, and not of fear,
A voice in the darkness, a knock at the door,
And a word that shall echo for evermore!
For, borne on the night-wind of the Past,
Through all our history, to the last,
In the hour of darkness and peril and need,
The people will waken and listen to hear
The hurrying hoof-beats of that steed,
And the midnight message of Paul Revere.

Paul Revere was crying out to fight the tyranny that would overtake them if there were no cry of defiance.  He did not worry for himself and his own comforts because he knew that without liberty, all the comforts in the world are worthless.  Would our founders in Boston allowed British soldiers to search their homes?  Would they have thrown open their doors and capitulated?  Our founders understood the need for the Second, Third, and Fourth Amendments to our Constitution and why it was and would be vitally important.  In the Declaration of Independence, four of the “abuses and usurpations” that are listed were addressed by them:

— No. 11: He has kept among us, in times of peace, Standing Armies without the Consent of our legislatures.

— No. 12: He has affected to render the Military independent and superior to the Civil power.

— No. 14: For Quartering large bodies of armed troops among us.

— No. 15: For protecting them, by a mock Trial, from punishment for any Murders which they should commit on the Inhabitants of these States.

For these abuses, our Founders had the insight to draw a clear and insightful line that the government officials could not cross:

Your person, your homes, your documents (electronic or printed) and your possessions are sacred and are granted security with the knowledge that no one is legitimate in searching any of these without your consent or without a proper warrant issued by a judge on probable cause of a crime.  Amen.

The precedent for the exception to these rights, unfortunately, began when we allowed the TSA to unlawfully search our persons at airport terminals with no probable cause.  Now, another precedent has been set when the citizens of Boston permitted their homes to be searched without objection.

I am not advocating that any citizen, when faced with a police force armed to the teeth to go “Rambo” and act irrationally.  There are ways to respectfully object, think clearly and without anger, and respond in a thoughtful but firm manner.  Do not let your emotions get the best of you and act like Bruce Willis on meth.  The media doesn’t need any help portraying patriots to be zealots in need of restraint and shock therapy.

Every American needs to reach deep inside themselves and consider where they will stand.  On what principal and right will they resist?  Will you be Bob or Jane when law enforcement locks down your neighborhood because of a potential terrorist threat?  When government promised security comes knocking, are you willing to pay the steep price of eroded liberty and freedom or will your neighbors hear the hurrying hoof-beats of your steed,
and your midnight message.

This link has been posted by FB as being abusive. What a load. Keep up the good work.

Thanks for the heads up Jim! Not sure why they consider that link abusive…