Prepping for the Big Freezes 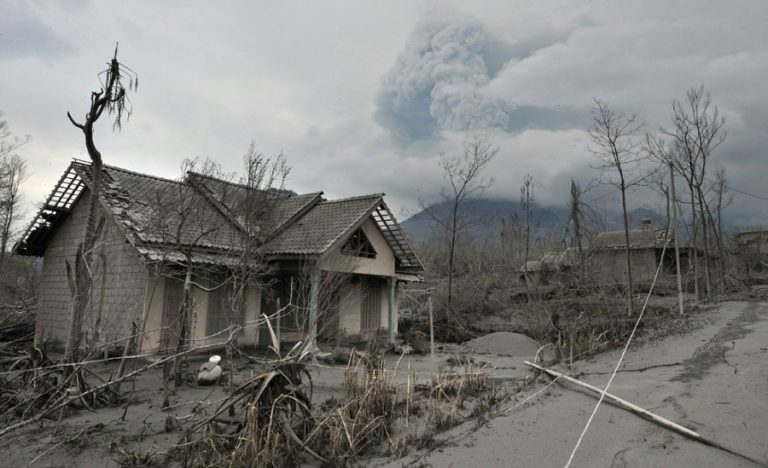 There are all kinds of potentials that lead to various mini or full-fledged ice ages … nuclear and volcanic winters, solar grand minimum, Agenda 21, polar shifts, breakdown of the oceanic conveyor, asteroids, or a perfect storm of incidents. Some of them have happened, some not all that long ago, really. Some of them will undoubtedly happen again; it’s just a question of this lifetime, this millennium, or some further distant date.

There’s ebb and flow in just how big, widespread, and bad results could be, and whether “It” results in airborne particles in the atmosphere. There are also shared characteristics, though, that we can prepare for. 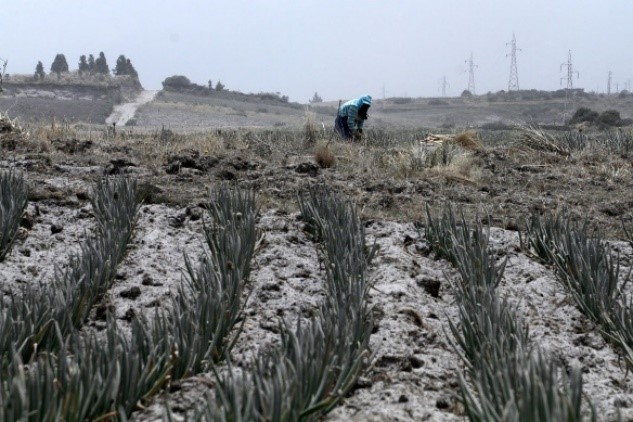 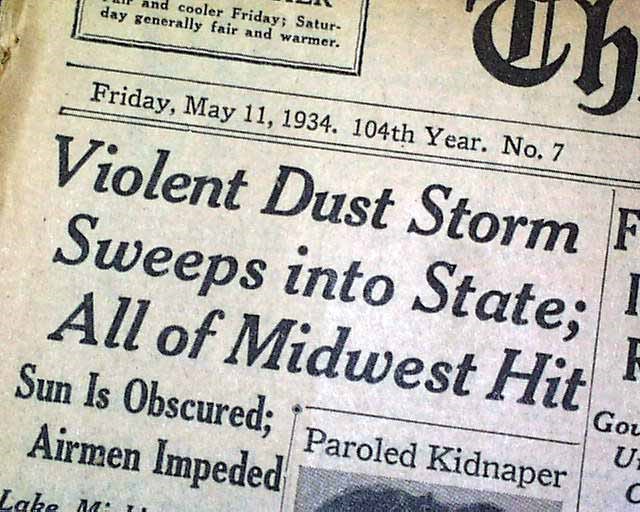 One of the nice things about modern life is our ability to find information about the past. The internet requires a liberal dose of salt, but it makes researching incredibly easy. Some of the potential Big Freeze disasters have already occurred, and have been studied in great detail.

We know the last mini ice age was kicked off by basically a perfect storm of conditions; it can give us some benchmarks and considerations. Continuing studies into Neanderthal’s world comes with others, like ice age sequestration of water.

The Dust Bowl in the American Midwest and similar conditions in Australia can serve as references, as can volcano after-effects. We can also look at existing harsh climates – Western Asia, the Steppes, the Andes, Horn of Africa, higher-altitude African ranges, and polar regions. They all have helpful nuggets to offer preppers. 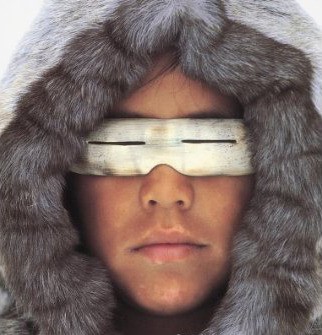 If we expect things to get colder, proper clothing is pretty obvious. Something we might not think about, though, are sunglasses and goggles.

Sunglasses cut the crazy amount of glare snow, ice, and water gives off. Even long ago, arctic peoples were making eye covers with slits to prevent snow blindness. Anybody who was in Iraq for the windstorms can testify to goggles’ usefulness. If you wear prescription glasses, get goggles that can go over them, or the masks that accept inserts.

Balaclavas, “hoo-rags”, and keffiyeh-types are also super handy, but if we’re planning for a Big Freeze, we’ll likely want some actual dust/debris masks, too.

The difference in price between N99 and N95 masks are negligible – pennies to a couple of dollars per mask or per pack of 10-20 – while reducing the stuff that’s getting through to our lungs from 5% to 1%. N-types don’t handle oils. P/R respirators do, but then you are talking about a bump in price. Look at your surroundings and budget, and weigh the potentials. 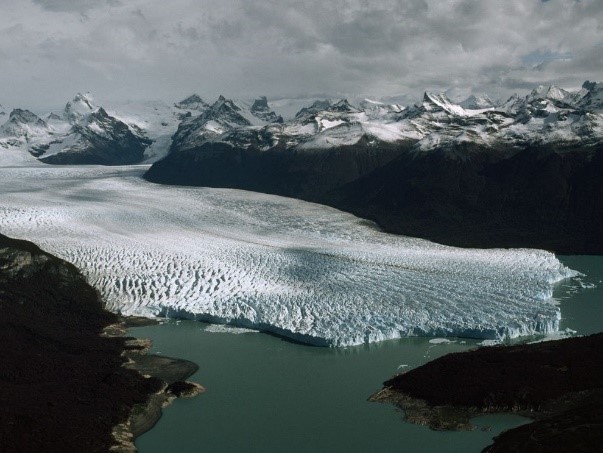 The frigid temperatures of severe cold periods have numerous side effects. For one, surface water will decrease and shift – a little or a lot, temporarily or for a while, varying by disaster.

Snowcaps and glaciers expand, not melting as much as usual due to lower temperatures. Aquifers, lakes, rivers, and inland seas that are normally fed by snowmelt shrink as a result (relatively quickly). 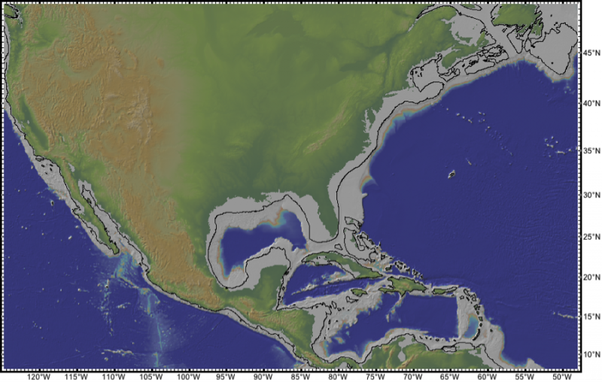 That ice stays out of the evaporative cycles that feed worldwide precipitation. Long-term ice ages create shorelines much further out into what are now bodies of water.

Some of the exposed areas will make for nutrient-rich planting. However, if things stay cool too long, we’ll start seeing negative effects in the floodplains and deltas that require flooding to recharge soils. After a few years, also expect increased salinity in lakes and inland seas, and in oceanic bays. That will affect what survives in those.

We could also see new patterns in the precipitation that does fall. 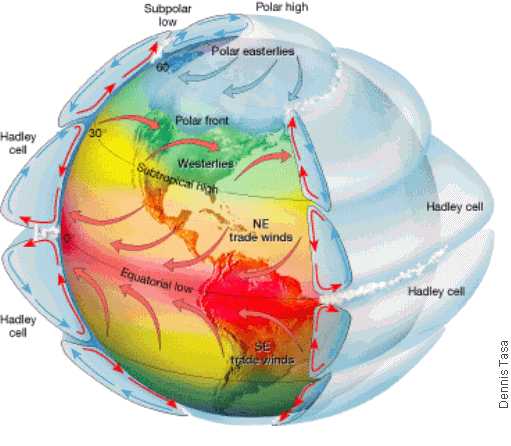 There’s a set of wind “tubes” that circle the earth (atmospheric circulation cells). They pick up moisture starting at the equator and distribute it outward. There are currently predictable zones that are wetter or dryer as a result (and predictable prevailing winds).

Cold air can’t carry as much moisture (example: mountain rain shadows). Precipitation could start dropping from those cells at new latitudes, changing our patterns – and potentially, long enough, the circulation cells themselves.

Our ability to access, filter/distill, and store water becomes increasingly vital in those conditions. 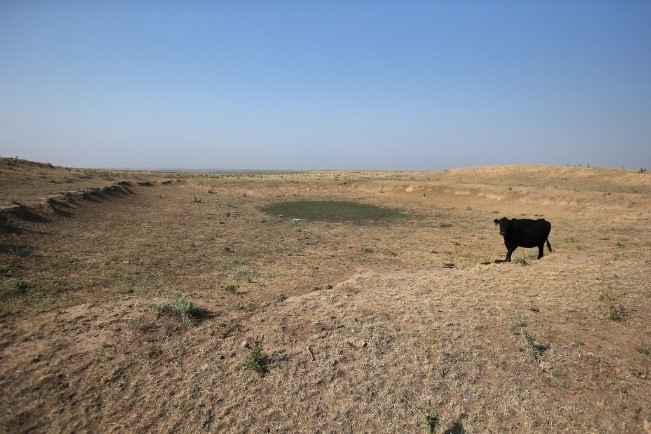 If it’s “just” another year without a summer, it won’t hugely affect the precipitation cycle. However, pasture is easily altered by a single-year drought (or flood). Once wrecked, it takes years and-or re-seeding to recover.

Another threat to consider even for single-year freezes is river ice. Ice dams – river ice lock, ice jams – form when melting river ice gets lodged and masses into a wall. It can cause flooding behind, with catastrophic breakups creating berg-laden tidal waves downstream. 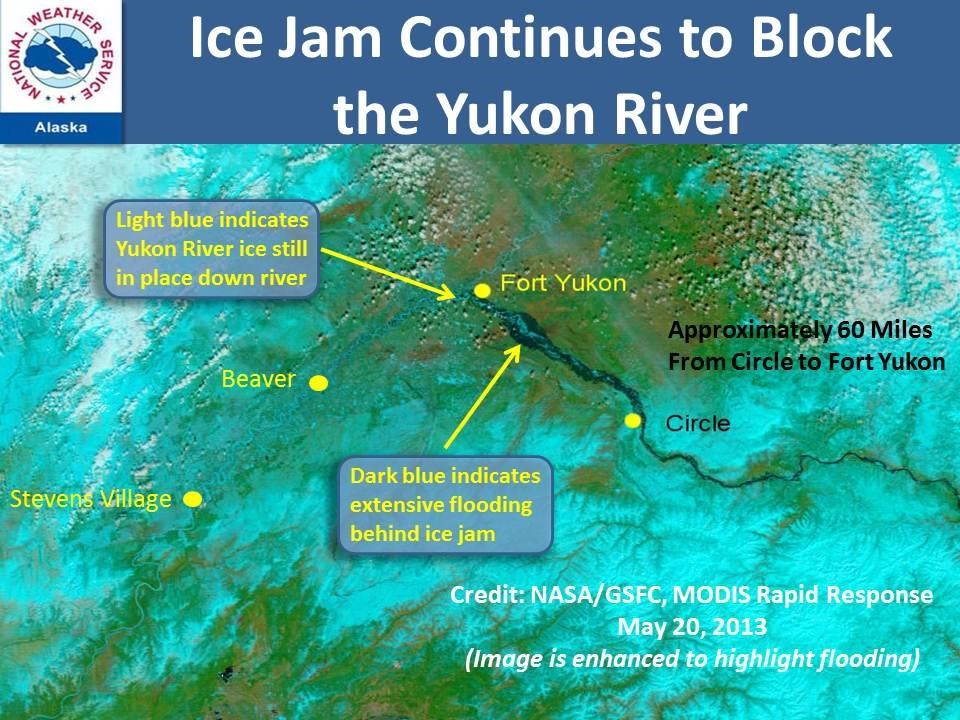 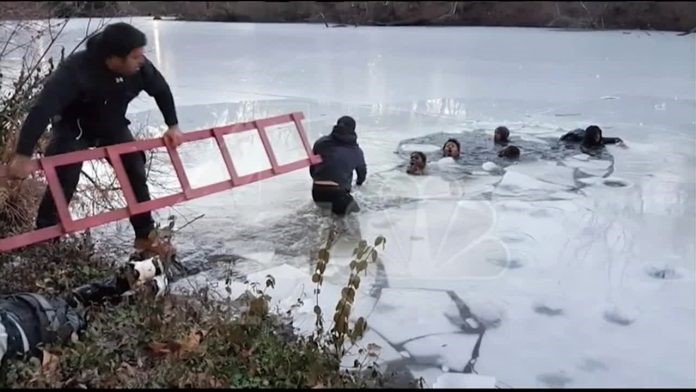 It’s already a regular concern in northern areas. In an ice age, the risk will extend into areas that aren’t accustomed to flooding or to that particular river threat.

Patchy ice on waterways is also dangerous. There aren’t many First Nations families who don’t have a story about losing someone to an icy river – and they’re aware of the risks. If we’ve never been exposed, we may have never given a thought to them not being solid enough for fishing or travel, and we don’t know how to pole if we absolutely have to cross them.

A sudden ice age could also freeze over bays and inlets, denying access and disrupting estuaries. That would affect breeding and migration of numerous fish and bird species – many of which we depend on. 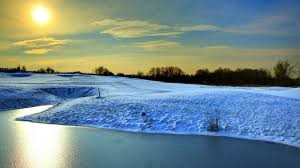 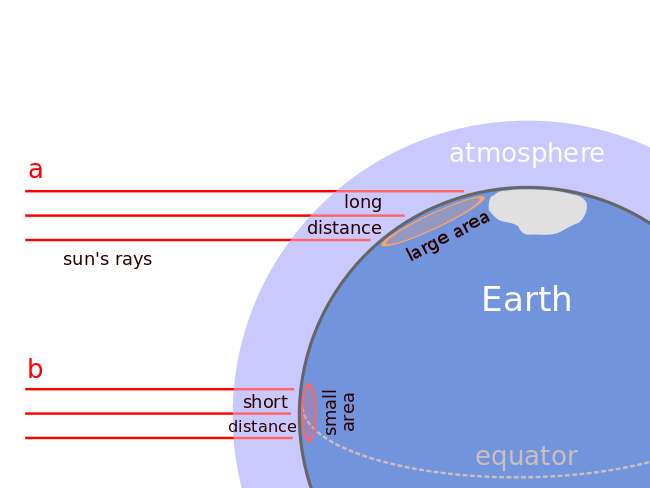 Many of the Big Freezes start with something in the atmosphere obscuring sunlight. That adds a number of other obstacles for preppers. See, one of winter’s challenges isn’t just the shorter days and cold. It’s that the quality of light is also reduced.

It’s caused by the angles of the sun and the amount of atmosphere – and atmospheric particles – the light has to get through. A simple mental image is: Fish = Light. Summer is one fish net with six-inch holes. Winter is three fish nets with one-inch holes. Fewer fishies make it downstream in winter, meaning fewer fish even available to be caught and used for energy. 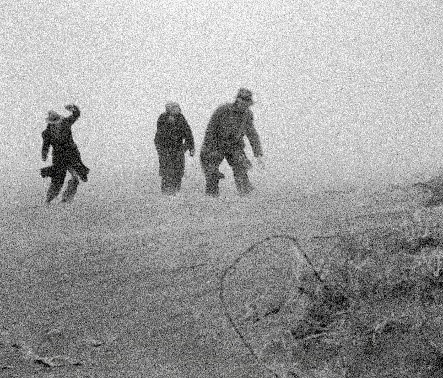 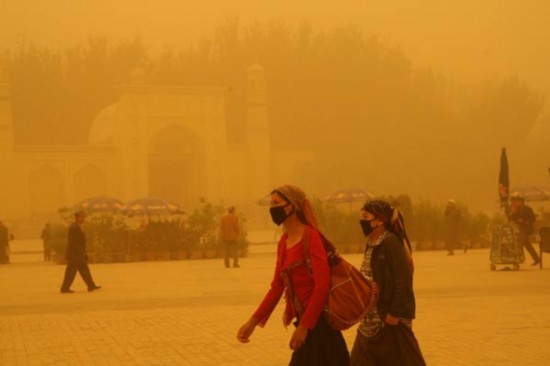 If we get enough ash or dust in the sky to kick off nuclear/volcanic winter, it creates the same diminished light quality. That can happen even without a volcano or asteroid. If things get too dry, obscuring dust starts flying around on ground level, a la Dust Bowl and Egypt’s Fertile Crescent.

So, we’re looking at decreased temperatures, varying losses of fresh water, and seriously decreased light. Then we add in some widespread sand blasting to keep it interesting. Good times.

Ash would be even worse.  Worldwide, volcanic ash has caused some significant problems pretty recently, from a flight nearly going down to re-routing airline traffic. 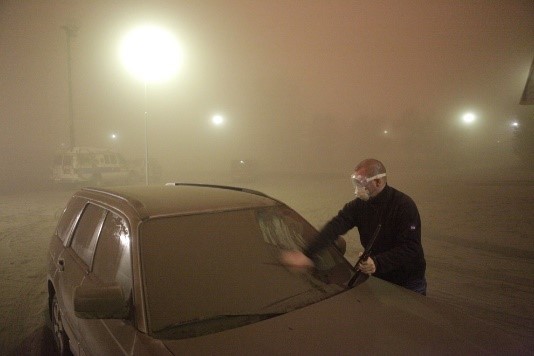 Another issue is dust/ash obscuring garden hoops, greenhouses, and cold frames. And, for more fun yet, volcanic ash has some interesting “if…then” variables.

See, it starts out with very low pH. If enough rain falls, though, washed-out soils are more manageable or go far enough for volcanic ash to mimic wood ash’s high pH. Volcanic ash can also cause acid rains and impact pH of waterways – affecting what lives there.

Depending on how long ash is aloft, when and how we get precipitation, and what our base soils are, a volcanic winter’s effects on crops (beyond the cold and a coating of tiny abrasive glass/rock) might be negligible, or enormous. 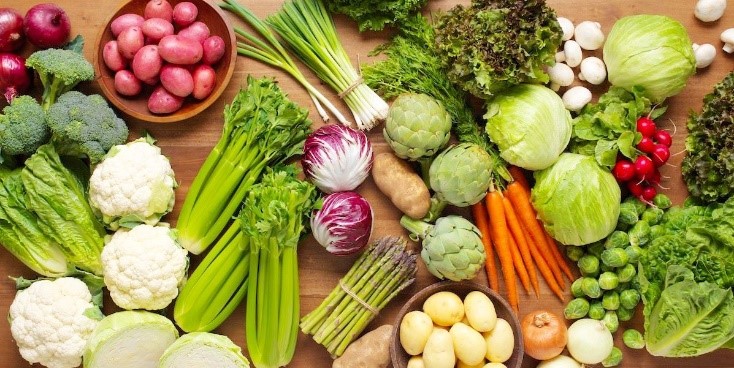 It’s those cole crops that are most tolerant of cool, gray summers and overwintering – so we possibly want to stockpile some amendments and-or row covers.

Worse, many cruciferous/brassica pests are active in cool weather, but their predators don’t show up until the weather warms. So any ice age affects production of the domestic crops most suited to cold. Longer freezes get even uglier due to crop rotation and biennial seeding limitations.

Instead of relying really heavily on our “normal” crops, if we’re worried about a Big Freeze, we turn to our frenemies: the weeds. Many edible and fodder-capable weeds thrive in wide-ranging, gnarly conditions.

We can grow them indoors, under row covers, or in yards and fields. We can pre-seed and nurture, or hold them to plant in an emergency. Remember, those weed seeds are survivors, too – a one-time or once-a-decade purchase.

We can also tap the internet for foreign locations with cold, dry climates and moderate to low pH. They have people foraging and animals grazing, domestic and wild. We can use their natives to augment our stored grains and beans, and produce some livestock feed, too.

We have more than crops to contend with, though. In addition to the lowered amounts and quality of light hitting the earth, the pitting, scratching, and accumulations from ash or dust will also affect prepper’s ever-popular solar panels. 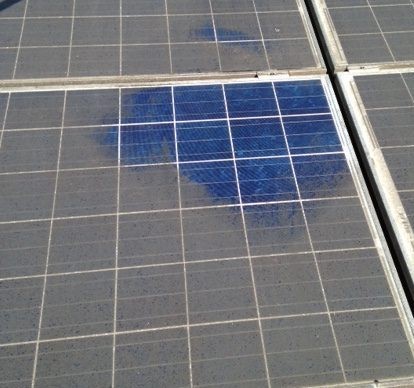 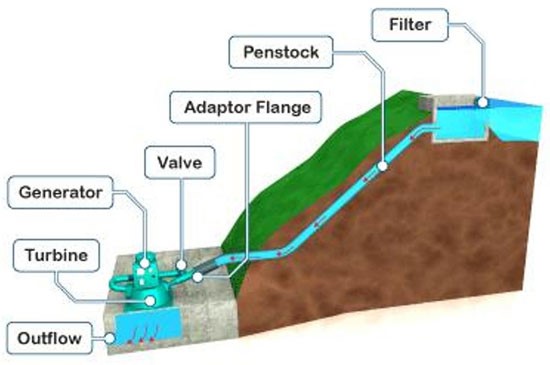 If this is our pick Bad Thing, we may want to look at options like small-scale hydro, gasifiers, or steam engines – especially if those can run off heat we’re already producing, similar to rocket stoves that charge phones/GPS. Trickle-charged battery banks can power tools, air filters, or high-efficiency lights to keep birds and plants in production.

We also want to seriously think about various windbreaks, covers, and draft stoppers to help filter some of the particles before they clog moving parts, windows to machines.

We also might want some Vitamin D supplements. Our ability to absorb calcium comes from Vitamin D. Even if we’re rarely outside, some of our D is coming from good ol’ sunlight … which is filtered and obscured in various ice-age scenarios.

Some Vitamin D isn’t a bad idea for livestock, either. Layers are already pushed pretty hard on calcium absorption in modern and heritage breeds. Dairy animals need it to keep their bones strong, too. Injuries due to low bone density would force us to put down animals.

It will also affect the ability of new dams to give birth without hip and pelvis damage, which could end that animal, too – costing us her, her milk yields, and the newborn animal. 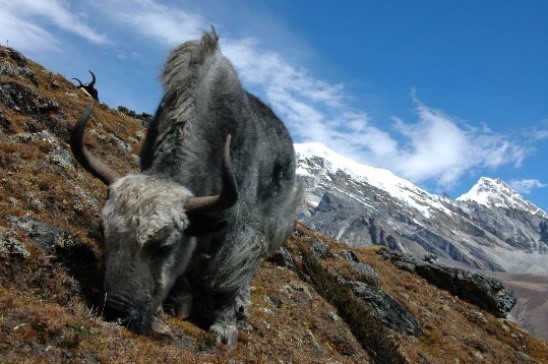 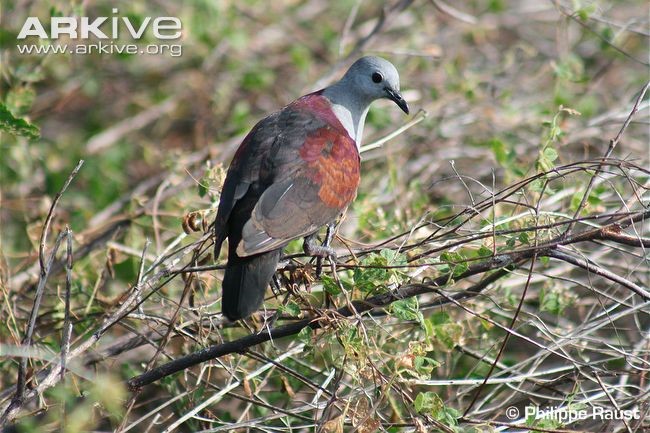 Speaking of critters … when we go searching for foreign plants and weeds, we might also want to check out foreign livestock and wildlife that can be domesticated.

Like alternative crops, those animals will yield less than conventional species, but they’re also already highly adapted to cold, to dry, and to lower-light conditions, and to the food sources available in those conditions. Mongolian and Greenland sheep, ponies and yaks, African and Western Asian goats and cattle, jungle fowl, and ground-dwelling forest and jungle doves are all examples. 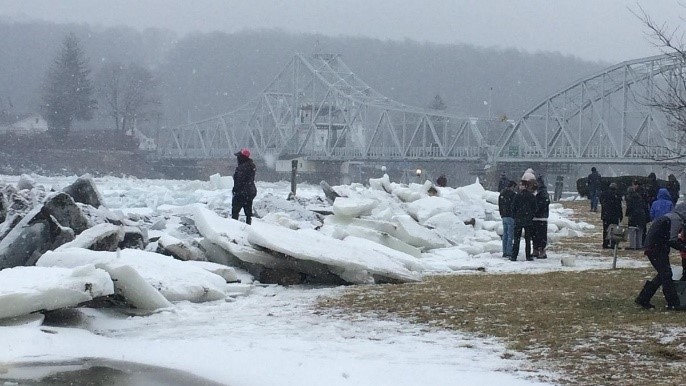 There’s a fair bit to contend with in an ice age, but it’s not insurmountable. Whether an event is “just” frigid, starts due to ash or dust, or “only” leads to a Dust Bowl type situation affects what we’ll have to deal with, and for how long. However, other disasters have similar adversities – drought, flood, water safety/availability, livestock and crop issues, energy, air quality. To some degree, long-term preparations are pretty similar. Preparing for a Big Freeze just has a few extras.