Building Your Own Firearms (Part 2 – The Methods) 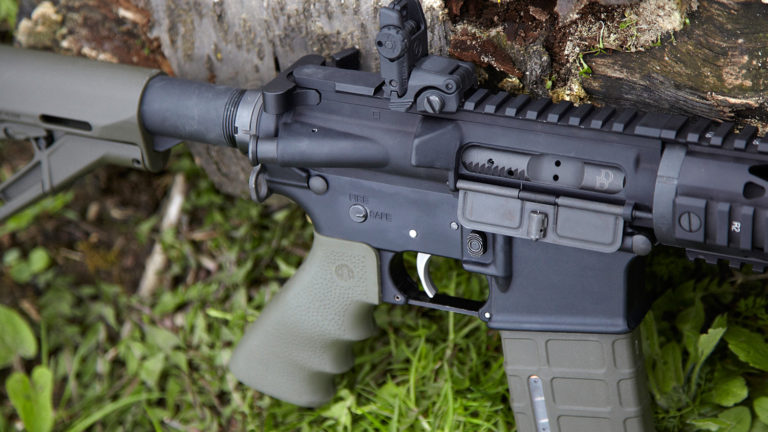 [NOTE:  I am not a lawyer, or a representative of any law enforcement or government agency.  The information provided here is the best I could find, but must not be taken to be legal advice.   If you decide to engage in the described activity, you assume all responsibility of ensuring that this information is CURRENTLY accurate, and investigating the CURRENT state and local laws of your location.  Furthermore, you assume all legal and physical liability resulting from your engagement in this activity.]

In the last article, we looked at the option of building your own firearm and found that it is (or was) legal (most places in the U.S.)   And we saw how it could possibly cause you legal problems even though you met all laws and regulations.  Also, note that although it might not necessarily be the cause of legal problems, if someone were to steal your self-manufactured non-serialized firearm there would not be a reliable way to get it back if it ever shows up again.

Fortunately, there is a way to reduce these annoyances.

How to Improve the Situation

As mentioned, no serial number is required by Federal law or regulation on your self-manufactured firearm.  But, rightly or wrongly, (modern) firearms without serial numbers are looked at with suspicion, and might even violate State or Local law.  To avoid this problem, as well as be able to identify it as yours, put on a valid serial number.  This gives you the “appearance of legality” and some recourse if the firearm is lost or stolen.  Even if you intend for no government organization or database to ever be aware of the firearm, you might as well meet BATFE regulations that serial numbers be “unique” and “hard to alter or remove”.  Practically (and legally), this means the serial number should be unique TO YOU (that is, don’t make several with the same serial number or use “trivial” serial numbers like “1”), and should be at least 0.003″ deep and 1/16″ high in a visible, non-removable location on the receiver.  It is best to do this before the 80% receiver has any work done, so it can be easily shipped, and anyone can do the engraving for you if you prefer.  Once you make even a start finishing the receiver, it is considered to be a firearm and getting any professional to work on it is has risk of violating laws or regulations, to the detriment of everybody involved.  While you are at it, there is some additional specified text, which if you include on the receiver, makes it even less “suspicious” looking. 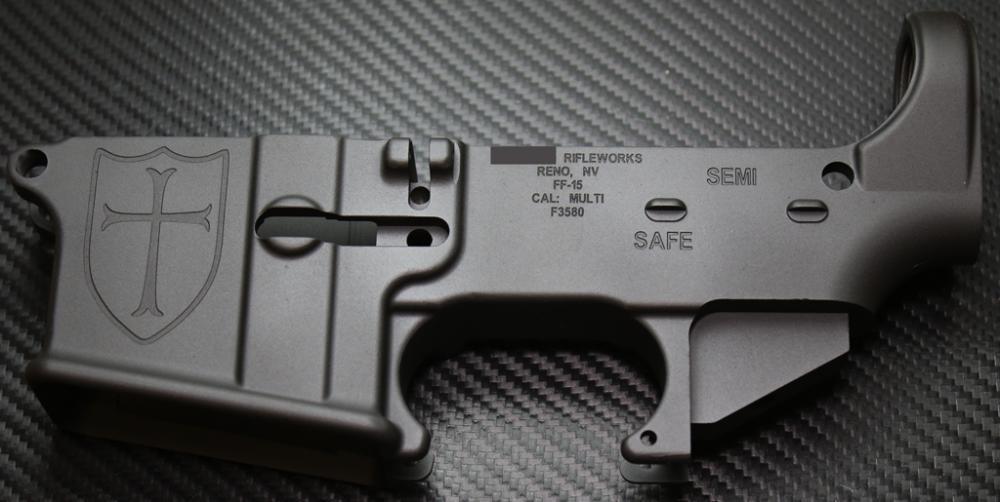 These are the same labeling requirements that a licensed manufacturer must follow, specified in 27 CFR § 478.92, making the self-manufactured firearm appear “equivalent” to a commercial firearm.  Several text elements are specified by this regulation:

Starting in 1994, when “assault weapons” were banned, any new “assault weapon” also had to be marked “RESTRICTED LAW ENFORCEMENT/GOVERNMENT USE ONLY” or, in the case of firearms manufactured for export, “FOR EXPORT ONLY”.  Although the AR-15 is (wrongly) considered by many (including the government, who ought to know better) to be an “assault weapon”, this ban expired (due to a 10 year sunset provision) in 2014, making this annoying marking fortunately no longer required, even though the regulations have not been updated to remove this wording.

There is no law or regulation requiring the safety to be marked, but if you are already doing any stamping/engraving/etching, you might as well mark the FIRE and SAFE positions.

The SBR, Another Risk 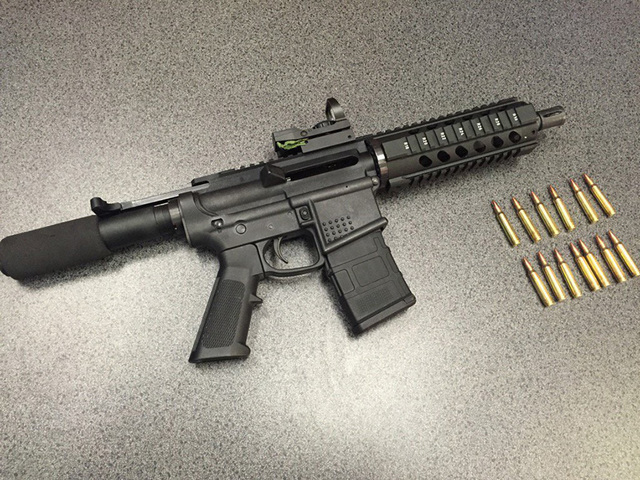 Most people know that a SBR (Short Barreled Rifle) with a barrel less than 16″ or an overall length less than 26″ is illegal, at least without going through the registration and taxation process the BATFE uses for “non-sporting or destructive” weapons defined by the NFA (National Firearms Act of 1935).  If you make your own firearms, you need to make sure that not only do you never create a SBR, but don’t even give the appearance of intending to do so.  If you build your own rifle and then decide you would rather turn it into a pistol, don’t.  You would be creating a SBR, which would be illegal unless you filled out all the paperwork and paid the $200 tax stamp in advance.  If you even store a receiver which was originally built as a rifle with the parts to make a pistol, you could be in for harassment.  A better process is to get the receiver intending to make it a pistol, document that intention via notarized statement, and then keep the receiver separate from any obvious rifle parts until the pistol is completed.

Note that there is no problem with turning a pistol into a full-sized rifle, and even turning it back into a pistol (ATF ruling 2011-4).  Just make sure that you never “pass through” a state where it has a stock and short barrel and, per the regulations quoted in the ruling, it would be risky to store a receiver which was made as a rifle “in close proximity” to a short barrel.

What You Need to Complete the Receiver

The key characteristic of a legal non-completed receiver (at least for AR-15 and AR-10 type firearms) is that the trigger/hammer cavity is not milled out.  To complete the receiver, you must mill this cavity out.  The best way, of course, is with a CNC (Computer Numerical Control) milling machine.  The odds that a person owns one of these personally or can even rent or borrow one have been infinitesimally small until recently, but there is now a company selling the “Ghost Gunner” for $1500 which may be an option if you think you might complete several receivers (or one if cost is no concern).  Possession of a “manual” mill machine is a bit more likely; you used to be able to get a “drill/mill” for very little, and can still get one for as little as $500.  A more common setup, particularly for making only one or two firearms, is a “jig” and vise used with a drill press or a good router.  You will also have to drill the holes for the hammer and trigger pins and the selector, which a drill press will do nicely, or you may be able to manage it with a hand drill.  Of course, you will need the correctly sized End Mill and drill bits, and perhaps some “cutting fluid”.  A shop vacuum to suck up the chips will be handy.  Possibly a file or Dremel tool may be needed to clean up any roughness, and for some jigs, a digital caliper will be very helpful setting your depth.   The jig will probably require some wrenches for assembly and disassembly, and safety glasses are a must.

Usually you will be working with a receiver which is made out of aluminum or a form of plastic.  If the receiver is steel or some other tough material, the drill press and router techniques probably will not be up to the task.  The “Ghost Gunner” is air-cooled and light duty, so even though it is a true mini “CNC mill”, it also will be inadequate to the task.  For a steel frame, you will probably need a true mill and lots of oil to cool and lubricate the cutter.

Make sure the jig you get is designed for the method you are using (drill press or router).  If using a drill press, remember that unlike a mill or drill/mill, it was not designed for side to side pressure, and is somewhat fragile in that axis.  When milling sideways, make sure you do shallow cuts with minimal pressure.  The router IS designed for side to side pressure, but in wood, not aluminum, so again, shallow cuts and light pressure keep the odds of disaster low.

People have been known to mess up this process, so getting a backup 80% receiver may be worth considering, particularly if you have rented or borrowed any of the equipment and can’t afford the time to order a replacement receiver.  If you want to get rid of a receiver which is past that 80% barrier but “unusable”, you shouldn’t just throw it out (because it is legally a firearm now).  Cut it in pieces so it cannot be reassembled or deliver it to the local police.

Future Changes to Laws and Regulations

Not only are there efforts at the some State and the Federal levels to “ban” (re-ban) the AR-15, but as you might expect, those who think firearm ownership needs to be tightly controlled are outraged about this self-manufacture “loophole”.  There have been and almost certainly will continue to be attempts at the Federal level to restrict self-manufactured firearms, if not entirely, at least to the same degree as commercial firearms.  And some states have and likely will continue to pass laws which directly or indirectly will limit your ability to build, or require registration of, or ban, certain firearms or types of firearms.  So if you have the skills, equipment access and desire to build your own, it might be better to start on it sooner rather than later.

For full disclosure, I will mention that an AR-15 receiver can also be printed using a 3D printer.  It would require a machine able to do something of that size and complexity, and using a material which was adequately strong and stable, and powered by the appropriate programming.  I don’t have any personal experience with 3D printers, and in the only case I know of where someone did print an AR-15 receiver, it was judged to be not safe or even usable without more work.  This is not to say the technology is not viable, or even will never be viable, just that I would want to see it “proved” and reasonably priced before I considered it.

Also, you can cast your own resin receivers with metal reinforcement.  Prior to the metal reinforcement, they seemed resistant to heat, cold and chemicals, and seemed ok for aimed (slow) fire, but in rapid fire reliably cracked at the takedown hole and did deform and eventually broke when stress was applied sideways to the buffer tube.  I have no indications on whether the metal reinforcement overcomes these weaknesses, but this option seems interesting if your talents are more “chemical” than mechanical.

If you want to build a firearm, but not mess with “manufacture”, you can buy a complete “stripped” receiver through normal firearm purchase channels, making the completed firearm legally indistinguishable from one made by a licensed company.

In the next two articles, we will look at what parts you need to complete an AR-15.