I got home and she was on the couch, neck deep in a Netflix binge. Clearly she’d been there most of the day. The house smelled stale, I opened a window.

Then I noticed the ice pack she had on her ankle. She jabbed at the remote, paused her movie, and, shockingly enough, put down the smartphone for a few minutes. I said, “Oh Honey!” to my grown daughter and asked what had happened.

She had been long-boarding (a form of skateboarding). She showed me the road rash, raw and painful in awkward places. This was the second sprained ankle in about eight weeks. The first time, we used a kitchen stool as a crutch to help her walk into the urgent care. I asked her if she wanted to go again, to make sure her ankle was not broken. She decided against it. Her friend’s mom who is an RN had already taken a look. My daughter said she cried when the pavement and dirt had to be dug out, and again when her wounds were trimmed and cleaned.

I brought her fresh water, a couple ibuprofen, and reminded her to keep her wounds clean. She said, “I don’t think I can go to work for a while.” Her job requires her to be fit and on her feet. At least this time, we had crutches and an an ankle brace ready to go.

You may have to count on yourself for medical care in a SHTF scenario.

I walked into the kitchen, started up dinner with the fresh greens I’d brought home. Gave my little guy a bowl of carrots and broccoli to tide him over until dinner. Measured out his evening antibiotic as he’d come down with strep throat over spring break. I’d planned on a stay-cation where we’d take my new AWD vehicle to semi-wilderness. I planned to give my grown son my old car – it was high time he had something reliable and because it was a mom van, it might come in handy one day so I didn’t want to give it up.

Anyway, while on spring break, I realized that my little guy was sick when he didn’t want to clamber up hills and explore the place. He was running a wicked fever so we went to the doctor – and sure enough, we’d have to stay home for 24 hours until he wasn’t contagious, and once he was fine, we went to museums and the zoo instead of the woods.

He was feeling much better by the time my girl sprained her ankle this second time and had some difficulty understanding why the entire 10 days of medicine had to be completed so it wouldn’t be only the weakest bacteria that were killed, but the strongest ones too.

I thought about how lucky we are my daughter has a support system, even in a normally functioning society. I thought about how if she were completely on her own and had kids counting on her, how different the situation would be. I thought about how potentially catastrophic an event like this would be, especially in a job where if she doesn’t work, she doesn’t get paid. This is not all that uncommon these days, even in relatively high paying contract positions that are used to control cost in the corporate world. When working in an arrangement which is contingent upon attendance, you have to be your own safety net. There are no unemployment benefits if one loses a contract or simply cannot work.

This isn’t an attempt at a big social statement. It’s just a reality – if my girl didn’t have a good support system with friends and family, she would be in a much bigger world of hurt than just being stuck on the couch in some pain, watching Netflix and texting with everyone she can think of to maintain some sort of social life. We talked about how risk and reward must be weighed against the broader consequences. As it is, she can shrug, feel embarrassed, give her employer a call, and hope they hold her job. They did, and even offered her some much lower paying sit down chores which she will take as soon as she can use her hands reasonably well.

But then I ask you to think about the true and mundane series of events I wrote about above if it were TEOTWAWKI. Firstly, the only reason any of my family should be on a longboard in that world is if there is a clear, urgent need and the risk is outweighed by whatever mission someone is on.

Second is to re-state the point that You Have to be Your Own Safety Net. This is regardless of the state of the world. Help may or may not come when you need it, but it’s not a good bet. Better to plan that there is no help coming; sometimes it’s not. 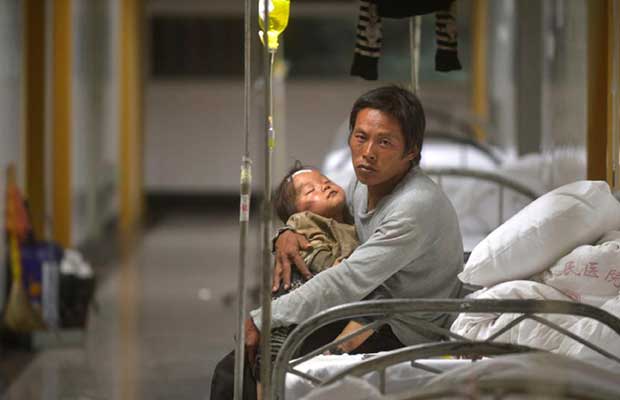 And last, for entirely frivolous reasons and because I just have to find a way work this observation in somewhere as a jab at the zombie movies and shows I really enjoy, my girl has been told in no uncertain terms that tank tops and shorts are patently inappropriate attire during a zombie apocalypse no matter how supremely cute she may look or how warm the summer day. She’s been made abundantly aware that she’s to make a break for a sporting goods store and get herself into a shark bite suit at the very least.  (no, I’m not too worried about a zombie invasion; I have the same opinion of female superheroes who wear stiletto heels while sprinting through the mud…Serious? Not.)

Anyway, to dissect my initial story to identify what would be much, much more difficult in TEOTWAWKI, I’m just going to make a list of categories of things I’m grateful for by examining my true story above. In my current situation, the story is no big deal and could easily be considered a non-story. In another situation, it could have been deadly for more than one person.

I had no intention of making an exhaustive list here of the planning required to survive if absolutely everything fell apart. If someone is looking for that, it’s well worth the time to read the archives here as I’ve found them to be both thought provoking and useful. This was just a reflection on one single afternoon in my current life and how it would compare to a survival world.

I guess it’s also a reflection on gratitude. For what we’ve built and for what we have now.

Do you have stories of things in your life that were minor, but that in a serious enough situation, you’d have hoped you’d have planned for?

Life threatening is right! Life before antibiotics was short. The average life span will return to 35 if we have a grid down or nuclear war situation. TV and cell phones will become things remembered, but that part is a good thing in my book. I saw a post from a young lady last week that said: “When I really want to talk to my friends but I don’t have anything to say.” Kids don’t know how to have a conversation without texting. Imagine what teens are going to be like in those first few months?! I foresee a massive… Read more »

Elizabeth
Reply to  Prepp or Die

Definitely. I know my parents were responsible and I also know I got all my vaccinations but still experienced scarlet fever, measles, mumps and rubella personally as a child (I can say with confidence it was incredibly not fun at all). I wouldn’t have made it out of childhood without modern medical care. I don’t know why the vaccinations didn’t work, but for me they didn’t. When coffee shop philosophers say silly things like, “I was born at the wrong time.” you can’t believe how hard it is for me not to roll my eyes and give a speech…lol! It… Read more »

oh but I want to share one exquisite memory from scarlet fever. My dad who is now gone brought me a cup. I must have been dangerously dehydrated in order for him to take his eyes off his work.

If I drank the liquid, there were circus animals that would spin. He refused to tell me why that happened.

I learned laminar flow because he knew I needed to be fascinated in order to live.

My thoughts exactly! Your post is excellent. You’re spot on regarding immunisation. We only need to reference U.S. Civil War casualty lists for verification of your statements on antibiotics, hygiene & vaccinations. Keep your posts coming!

Thanks Kenn! I’ll do my best!