The current administration’s policies are starting to reap some grim results!

The quote on the Statue of Liberty says: “Give me your tired, your poor, your huddled masses yearning to breathe free.”… Emma Lazarus

Obama’s lawlessness and out-of-control policies, especially his ‘open border’ policy may be the end of America as we all knew it?

Under Obama’s watch, maybe the quote on the Statue of Liberty should say: ‘Bring me your criminals, your diseases and your failed politics’?

Today’s national news (9-30-14) carried the story of a Texas man who flew from Liberia to Texas. It seems that he was in the general population (used the restroom on the airplane, etc.) during his travels and arrival into Texas. Allegedly, several days after arriving home in Texas, he became ill and was diagnosed with the deadly Ebola virus…

They (CDC, etc) say it’s not as contagious as things like the flu, and it spreads from bodily fluids, which tends to downplay the threat. Of course saliva is such a fluid, as is the mucus from a person’s lung… and these fluids can be transmitted mechanically through direct contamination on bathroom surfaces, or if someone coughs or sneezes in your face and you inhale those small particles of bodily fluids.

The CDC estimates there may be as many as 1.4 million cases of Ebola in Africa by this January… that’s in 90 days! The worst-case scenarios may actually be a middle of the road projection simply because the CDC cannot fully comprehend the entirety of the situation… people who are carrying the disease are leaving Africa by plane and rail, and will, like the man in Texas, be arriving in other countries with the virus blooming. 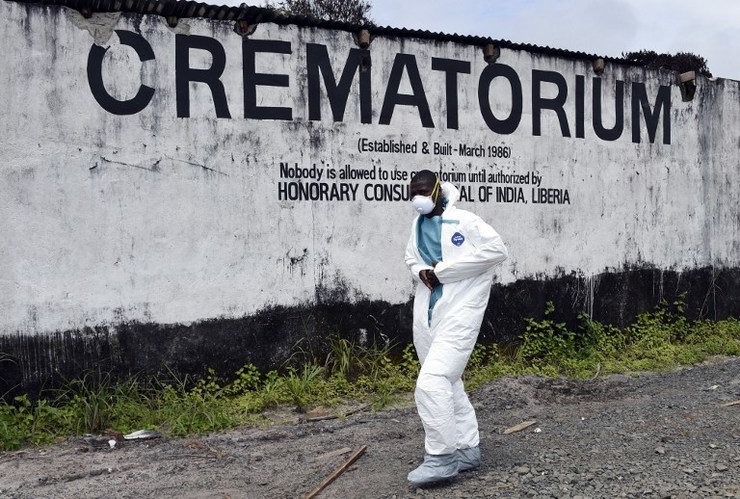 OK folks, this is no joke, and given the less than forthcoming nature of the current administration (“You can keep your doctor, etc.”… Obama), it may be reasonable to take their level of confidence as to containment of the deadly disease with a grain of salt. Of course we do know that; if we were in deep manure, they certainly wouldn’t be saying so, as this would cause uncontrollable panic by the public… after all… what disease causes you to hemorrhage from every orifice on your body?

OK, some people may say: What about the doctors who became infected that who were treated in the U.S. and cured? Sure they were cured; but they were treated in ‘containment’ within a special ‘B.L. 4’ intensive care hospital treatment center… that means; special containment room with round the clock care by special nurses and doctors trained in rare contagious diseases…

So if we did suffer an outbreak here in the U.S., and we had only as many cases as Africa has now (about 5,000-10,000 cases) how many such BL4 facilities do you suppose there are in the U.S. to treat the sick? The simple answer is not nearly enough! We have just a handful… As it stands today, B.L. 4 level treatment centers are very far and few between.

In fact, the total number of normal ICU (no special containment systems; not set-up to handle diseases like EBOLA) beds across the entire United States is only about 100,000 beds…

So what the heck do you do when 200,000 people become ill with a deadly, highly contagious disease? How many people have seen the movie ‘Outbreak’? It’s uncanny how throughout history, science fiction becomes science fact with some time…

It’s not my intent to frighten people with this information;… but, anyway you look at this reality… it’s unsettling and a measure of preparedness seems to be prudent now. Looking at the rate of spread in Africa, this is no joke, and now that it’s here, people who want to mitigate their risks need to be ready! 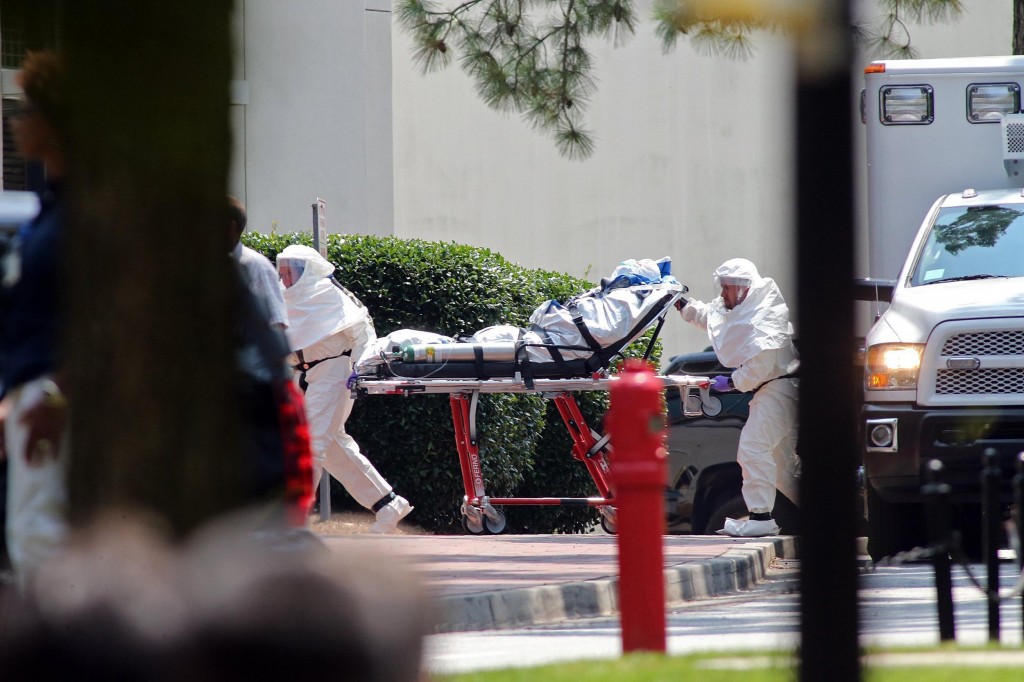 The only choice we have, average folks like you and me, who aren’t ‘special’ enough to be flown to a BL4 medical unit for special 24/7 care, is to take the right steps now to protect ourselves from infection. Of course the very few existing BL4 treatment centers would be handling the elite few who became ill in any event. And I wouldn’t bet on Obama-Care getting you any leverage in getting treatment.

The best solution for everyday people is to avoid being infected, and the number one method to avoid contagion is to avoid exposure to anyone who may be contagious. This is not as easy as it sounds. People can be in the very first stages of the illness and still be walking around (Ebola incubation period can be as little as 3-days or as long as 3-weeks)… it’s not like in the movies where you just start bleeding out of your eyes and ears… etc. I have read that the first stages are like a bad flu… and we all know people who have been at work with the damn flu, making the rest of us sick too… I fear this could happen here in the U.S. and elsewhere.

The key is to be a good ‘Prepper’ and have your disaster preparedness plans well in hand! That means having enough food, water, supplies, fuel (for heating and electrical), clothing, medicines, etc. stocked and set aside now. What’s enough? That’s hard to say… if there were an outbreak in a local community, you may have to stay isolated for many weeks, possibly months, until all of the cases have cleared. In the event of a national epidemic, as we have seen with the annual flu, Ebola could cross the U.S. coast to coast. And the best protection you can get is isolation from anyone who may be carrying the virus.

The combination of the upcoming seasonal flu with the spread of Ebola will make it very difficult for medical professionals this fall and winter, and may mask its presence and spread to some degree, especially if we have a bad Flu season. It will be even harder for average citizens to decipher the difference between a serious flu and the more sinister Ebola virus.

Stay tuned… I intend to get into some more details on how to protect yourself and your family. We should all pray for the best outcome, while we prepare for the worst.

OK, so what if we lose 10,0000,000 to ebola? We’ve lost over 70,000,000 to abortion and that seems to bother very few people. About 600,000 a year die from tobacco related diseases while our illustrious government continues to do tax payer funder studies to see if nicotine is addictive. And, if you will, what is the big concern about the border. Those people for the most part come here for better jobs our kids and employees won’t do at any wage. Yes, some are terrorist, I know that, but we didn’t lose the country because of the President, worthless as… Read more »

Semper Fi towtruck and Capt. Simpson. I have to agree that we are largely a nation of spoiled, entitlement-seeking persons, whether its the young ones who expect life on a silver platter, or even our elderly who expect special treatment because “I’m a senior” and have decided to cash in on all the benefits out there over-and-above what they worked and saved towards. Our technology has allowed a culture of laziness, disdain for, and unfamiliarity with hard work, sacrifice, and delayed gratification to brood. In answer to your question about losing 10 million to Ebola, I think that we’ll lose… Read more »

Hi Capt. Simpson you make a lot of good points but maybe in the grand scheme of things I’m just ready for it to be over and maybe I don’t even realize it. I’m just so very tired of working to pay other people’s bills while they get up after I’ve been at work for four hours. Single mothers [whores] go to college free while us working people pay tuituion out the ying yang. Everywhere we look there are so many people that just don’t even try to make their own living. I hate them with an absolute passion. Yes… Read more »

Some simple preps for basic hygiene needs. This is not a comprehensive list: 1) Learn, practice, and ENFORCE proper handwashing technique. This will be the number one way to prevent most disease. 2) Learn to prevent food-borne illness with proper preparation (cross contamination), storage, and cooking. 3) Learn, practice, and ENFORCE proper toileting technique if power/water/sewage go out. 4) Stock up on liquid soap (bar can harbor germs), paper towels (reuse as kindling/fire starter), and alcohol-based hand-sanitizer. 5) Babywipes are excellent bathing tools to conserve water and you can throw them in the fire when you’re done. We used them… Read more »

Gentlemen: I have been living a ‘prepared’ lifestyle almost my whole life, and writing about it for years… and now it comes to this… our own commander and chief has totally failed Americans in favor of foreigners who he seems to adore more than the People and the country that gave him the opportunities and wealth he now enjoys… and as some have written, it may even be worse… he may be intentionally allowing these gaps and flaws in our national security in order to carry-out some other currently unknown agenda. The blame for this situation is his and his… Read more »

Your “article” ceased to lose credibility when you began it with “Obama’s America” and “Obama’s Lawlessness & Out of Control Policies”. It’s articles like this that many mainstream citizens see and don’t take seriously the need to prep due to their content. Every President has had a similar issue arise in some form with communicable diseases. In response, money for the CDC comes from Congress. The same bunch of buffoons who shut down the country and can’t get over their own egos to keep moving forward with poor agendas and policies that are clearly harming the country and the planet.… Read more »

Dear ‘CMDR’ is it? It sounds like you are pro-Obama (he is in a league of his own when it comes to bad politicians), and that comes through loud and clear from your response. Obama is the Commander and Chief and he gives the marching orders and has appointed many of the people handling the current debacle. When it served his political goals, he quickly shut down all flights into and out of Israel recently and used the principal of ‘National Security’. Yet, Ebola, which is so deadly that Russia stepped back from weaponizing it (even though they weaponized Small… Read more »