Top Five Reasons for a Woman to Carry Concealed 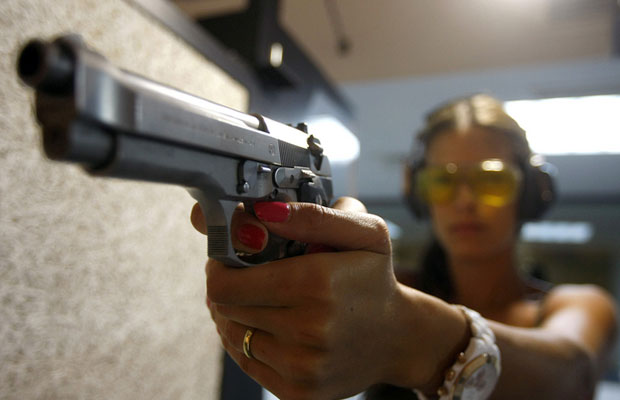 I recently completed several hours of instruction to get my concealed carry permit. In the state where I reside, eight hours or instruction, a written exam, and qualification at a range are required to receive documentation to apply for concealed carry permits. States differ in their requirements so do your homework if you are interested in attaining a permit. A helpful site with loads of info is at USA Concealed Carry. There is also a great app available for your iPhone or Android called Legal Heat that updates you and keeps you current if laws change in your state or any state you may be traveling to.

I wanted to share my experience with obtaining a concealed carry permit because I believe it’s helpful to hear a first-hand account to be prepared for the best and the worst. The fees for these classes can be pricey and time-consuming so hopefully, in writing this, I can give insight into the process. In other words, as Abe Lincoln put it, “Give me six hours to chop down a tree and I will spend the first four sharpening the axe.” Additionally I wanted to share my top five reasons for a woman to carry concealed so you ladies out there could benefit from the perspective of a female’s voice on this subject.

Before my first class even started, I was of the opinion that there existed three types of women who get their concealed carry permit:

I was the only woman in the whole class. The class was divided into two days; four hours each. At the end there was a written test and I had to qualify by hitting 28 out of 40 hits to a target. Most of the preliminary instruction was just about the legality of putting a hole in someone and under what circumstances it was frowned upon and could land you in a lot of trouble. During the breaks I mingled with my fellow classmates who liked to share stories, gun knowledge, and loads of advice for me to follow because I am a woman and I obviously needed it. They were well-meaning so I nodded my head and pretended to be completely astounded at how incredibly knowledgeable in “all things guns” they were. I fell short of breaking out a notepad and pen, taking notes and suggesting they approach the instructor and demand to take over the class.

After the first day, I let out a sigh of relief, but then remembered that the qualification would follow the next day. I have shot several different guns on many occasions. My husband has filled my head with all the information regarding proper handling and safe discharge of a gun. I don’t know why I was so anxious; I had no reason to think I would fail.

Day two had arrived and we had to take the written test which I was not the least bit nervous about thanks to my husband. He had been drilling firearm dos and don’ts into my head for years. Once the exam was completed, the live fire qualifying was the last hurdle. I took the gun I like to shoot best. It’s a 1911 that my husband’s grandfather carried in Vietnam. I like it because it never jams, it’s easy to rack the slide, and well, I just like it. We all obediently followed out instructor like lemmings inside the range with our glasses, ear protection, and gun cases. This is the point where I realized that there was a good chance that I might vomit. My nerves were shot and every horrible scenario I had envisioned the night before flooded my brain and took over all common sense. For instance, I had imagined my husband’s horror when he received the call that I had accidentally shot my instructor. I wondered, “What if I completely missed the target 40 times and my classmates and instructor laughed me out of the range pelting me with earplugs as I shamefully exited the building with my tail between my legs.” Worst of all, the instructor told us stories of past mistakes stupid and incompetent people had made when qualifying which only added to the multitude of things that could go terribly wrong. All that said, I still managed to walk back to the range clinging to my case with sweaty palms. The instructor inquired as to who wanted to shoot first. And do you know what all the men said? “Ladies first,” the gentlemen exclaimed in unison. I swallowed hard, stood up, and slid my magazine in. The instructor told me I would have to shoot in designated clusters from either a down position or a draw. I took a deep breath and shot my target. I hit 37 out of 40, even with shaky hands and a group of know-it-alls standing behind me scrutinizing my every move. When it was all done I was a sweaty mess, my heart was pounding, but I had my certificate. When I confessed to my instructor that I had been so nervous he replied, “Everyone should be tested when their heart is pounding in their throat and they’re less than confident because more than likely if the need arises for you to defend yourself you will feel exactly that. Now you know you can shoot when the pressure is on.” Sage advice.

I have concluded since then that it is unfair to throw women into the three categories because I discovered that there is a little bit of Rambo Rhonda and Paranoid Patricia in me and maybe, many other women. Now that I have completed my instruction and survived the qualification, I can legally be a gun-toting woman who is able to fend off an attacker, rapist, or robber if that moment ever arises. Although my reason for taking the class may have been my husband’s insistence, I can safely say that Hounded Henrietta is relieved and feels a sense of accomplishment.

In addition, if you have never handled a gun or don’t feel you have the confidence with a firearm, find a range near you. Ranges offer classes to beginners and it would be a great first step for anyone wanting to carry.

Still not convinced you should carry concealed? Here are the Top Five Reasons for a woman to Carry Concealed:

#1 -You will be prepared in the event you need to defend your life or the life of someone else.

Carrying concealed at its most basic means that you simply have a firearm in your possession. The advantage of concealing the firearm is that you don’t freak people out who are scared of guns and you don’t immediately draw attention to yourself from any bad guys. By having a concealed weapon on your person, you will be in a position to defend yourself if necessary. All the guns in the world don’t do you any good if you don’t have one when you need it.

#2 – Carrying concealed will make you more aware of your surroundings

Carrying concealed will cause you to notice your surroundings more and observe things like people, their reactions and exits. I don’t know if it is the weight of the firearm that you constantly feel regardless of where you choose to conceal this on your body or the simple awareness that you have a responsibility and the ability to step into action if the need arose. Carrying concealed places you in a mindset to act that you weren’t in before when the gun stayed at home.

Along with the awareness in reason number 2 and because of reason number one you will be more confident when you carry concealed that you will be able to defend a life. As long as you are comfortable with the operation of your chosen firearm and have trained yourself how to shoot effectively, having a weapon will empower you to act in defense of a live.

I like to take walks at night as the temperature is cooler but my husband was always a little concerned that I was going out into the darkness without any protection besides a wicked ability to scream that would rival the best horror movie star and maybe a flashlight. He would often give me his concealed carry weapon, but now that I can legally carry and do, he is more comfortable. I know this might not be a benefit to you, but it will give your loved ones peace of mind. Its a fringe benefit.

With your concealed carry license you no longer have to lock your weapon up in the trunk or glove-box when you are driving. With your concealed carry license, the old rules about transporting a weapon in the car no longer apply. You do have to be mindful if you are traveling to other states though to ensure you aren’t breaking another state’s laws. If you do plan to take a trip, consult the Concealed Carry Reciprocity map before you leave.

Do you have your concealed carry permit?

This sounds more like what I expected when I started thinking about getting a concealed carry permit, but I live in WA so I just need to go down to the sheriff’s office, hand him $55, and wait a month. Convenient for me, but makes me wonder about the training of other people walking around strapped.

Cornelia, I appreciated that you shared your experience in taking a concealed carry class. I’ve been debating about whether or not I should take a class. My father-in-law suggested the idea to me because he said life throws curve balls all the time and we just need to be prepared if one ever comes our way.

I would agree with the class. I now live in a state that does not require one BUT the class teaches you the rules, there are always rules, you have to follow to not run afoul of the laws, local and state. Knowledge is power, worth the time – usually 8-hours on a Saturday. Good place to meet like-minded people as well.

I hadn’t thought about it a whole lot, but you do raise several good points about women carrying concealed. It’s especially great that you bring up the ability to defend yourself if it is needed. In addition to that it can make your loved ones much more comfortable knowing that you can defend yourself.