The Airlift of Illegals: Importing Poverty Into the U.S. 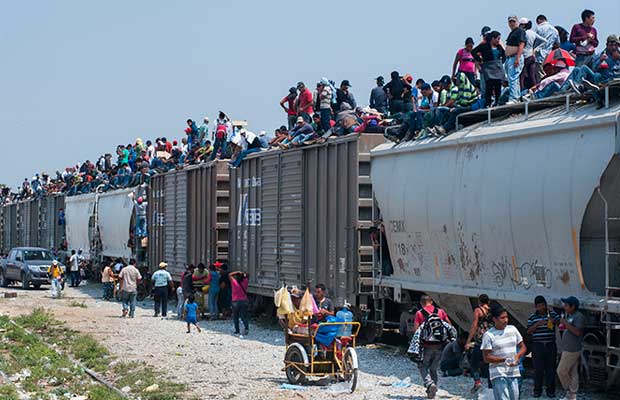 Illegals crossing the border on trains

The crisis on the border has stretched on for weeks now and shows no sign of stopping. Our representatives intend to use this issue as a political football in the upcoming elections and as usual, in their strategy of posturing and deflecting blame which only seems to be focused on protecting their power, it is the American people who will suffer the consequences of their inaction. On the left side we see welcome arms from politicians posturing on the border with, lollipops and clean underwear for the thousands of illegal immigrants with  free travel further into the US and calls of racism toward anyone who complains of this flood of children, gang members and single mothers daily into our country. The right side talks of sending troops to the border, impeachment hearings, lawsuits and committees that never do anything. As far as the American people are concerned, both sides in this political theater we call government are proving once again, that it isn’t you who they are concerned about, it is only themselves. While we watch from the sidelines as our country is heading even faster down a dangerous path hell-bent on its own destruction.

The Airlift of Evil

The American government, like most other governments to be sure, has a sordid past. On both political sides individuals and whole administrations have taken steps that reduce our freedoms.  They have implemented policies that have weakened our country and caused the death and suffering of untold numbers across the world as well as right here at home. Somewhere along the way as a nation we lost our morality and the people that value life the least have been steering the ships of our institutions of learning, politics and courts. Our principles became something to be quickly forgotten if the right political need arose. Shady dealings under the guise of idealism on one side or another,  and vague threats to national security have always prompted illegal actions by men who had to ‘make the tough decisions’. There are millions of excuses for why actions are taken which on their face are clearly wrong, even counter-intuitive to reason, yet they are explained away as necessary and we keep shuffling on, heads down and compliant. Almost any reality TV show is more important.

Just one single example of actions taken in secret, which would be counter to everything we were told by the powers that be, was the airlift of evil. You may remember this from the war in Afghanistan. Here we were fighting the Taliban who were and still are supposed to be the masterminds of all the evil in the world. The same group who was responsible for the crew who flew planes into the towers and caused the death of thousands on 9/11 in an event that shocked the world. These were the ultimate bad guys and their eradication was supposed to be our number one goal. To destroy the Taliban so they could never hurt Americans again was the primary reason we sent troops to Afghanistan in the first place, correct? If the Taliban had to be destroyed, why did the American government allow thousands of their top commanders to be flown out of the area we were getting ready to attack just days later?

Maybe they had a good reason you say? Maybe there were deals we don’t know about and there was a strategy that played out behind the scenes that we aren’t enlightened enough to know about. There are incredibly smart people in charge in our government so why are you questioning what they did?

You have no doubt also heard people say in our cultural insanity that is political correctness, that these people coming into our country shouldn’t be called illegal. Without getting into the absurdity of this too much, I’ll simply copy what is written down as the definition:

It is forbidden by our laws (at least right now it is) to enter our country without proper documentation so anyone who is here that isn’t a citizen or someone with a proper visa is here illegally. I am just going to call it like I see it. There are those who say, how does this hurt our country? We are the richest country in the world so we should allow people to come here. Even others say there shouldn’t be any borders anywhere. Who are you to tell me where I can walk on this earth?

I will tell you how this hurts our country and it is primarily in two ways. First of all, these people are coming into our country with no money, no jobs and no place to go. We as the incredibly nice country we are will happily sign them up for welfare and free healthcare even though they won’t be paying into either of these systems. They will undoubtedly be given a place to stay, a stipend to live on and free education. These things all cost money and contrary to the people who think we are the richest nation in the world, we don’t have any money. In fact, we are in so much debt, we will never get out of debt. Our country’s economy is a ticking time bomb that is just waiting for the right event to go off.

We hear talk all the time of needing illegals to come in to do ‘the jobs that Americans won’t do’ or that we ‘don’t have enough skilled workers’ to do these jobs. That to me sounds completely out of phase with reality because of our incredibly high unemployment rates right now. If over 9 million people are out of work, how can there be jobs American’s don’t want to do? Perhaps if the NSA wasn’t employing so many people for the careers of spying on everyone we would have more smart people to do the high-tech jobs. At any rate, with the number of companies laying off people, I am sure we should have more than enough smart people here to do the work very soon. Certainly, not many of these people riding trains through Mexico are going to get those high-tech jobs are they?

What about borders? Shouldn’t we all as citizens of this earth be able to walk anywhere we want to? I don’t think we should allow that either. What if I wanted to walk into your home and demand you give me a place to sleep and food. What would you say to that? You’d probably call the cops wouldn’t you? It’s not really much different with a country’s borders.

By allowing a flood of people who are coming into our country without a job, who need basic assistance to live and paying for them to get to big cities all over America, we have begun a policy of importing poverty. Is that what we really need to be doing? Maybe if we had so much money, people were lighting it on fire to warm themselves I could see something like this, but as it stands right now to me this seems like national suicide. Why would our government allow something like this to happen, heck even promote it, unless this was another example of the behind the scenes shady dealings like the airlift of evil. Perhaps our government is again allowing something to happen for another reason?

REX 84 and the anticipated collapse of America

We have talked about a collapse of our government and FEMA camps alongside with our governments increasing actions to militarize law enforcement, curtail civil liberties and plan for mass civil unrest. Our government thought about a scenario just like this not too long ago.

REX 84, short for Readiness Exercise 1984 was set up by our government to handle exactly this same scenario as we are seeing unfold on the border now.

The Rex 84 Program was originally established on the reasoning that if a “mass exodus” of illegal aliens crossed the Mexican/US border, they would be quickly rounded up and detained in detention centers by FEMA.

Existence of the Rex 84 plan was first revealed during the Iran-Contra Hearings in 1987, and subsequently reported by the Miami Herald on July 5, 1987

” These camps are to be operated by FEMA should martial law need to be implemented in the United States and all it would take is a presidential signature on a proclamation and the attorney general’s signature on a warrant to which a list of names is attached.”

What does this have to do with prepping?

Good question? What does any of this have to do with Prepping? You say, I don’t care what happens at the border, or I don’t believe our government ever does anything wrong. What you are talking about is all conspiracy theory and there are no covert plans to put citizens in FEMA camps. How can I say that there are plans by anyone in government that are anything other than rosy and perfect for the American people?

If that is what you think, I would ask you to dig further. There is a wealth of information out there that isn’t fed to you via the normal channels. There are events that aren’t covered on the history channel and you won’t read about them in People magazine. These events that are happening now are not accidental and they aren’t without potential risks to our nation and eventually you and your family.

Preppers should be highly aware of the risks they face not just from natural disasters, but man-made disasters because they can both kill you. Just because this disaster isn’t called a cute name and comes with high winds, it can still cause massive destruction. If you are serious about being prepared, make sure you pay attention to the events on the border and the larger actions of a government who has done strange things in the past. What is going on now is surely strange and the eerie correlation to secretive plans that involve martial law shouldn’t be lightly ignored.

The powers to be ONLY care about holding onto what they have – getting more of it – and NOTHING ELSE! Now on this issue – it’s for the children…IT’S ALWAYS FOR THE CHILDREN – my school taxes always go up for THE CHILDREN and I don’t even HAVE ANY CHILDREN! This country has completely turned up side down. Pathetic and very, very sad.