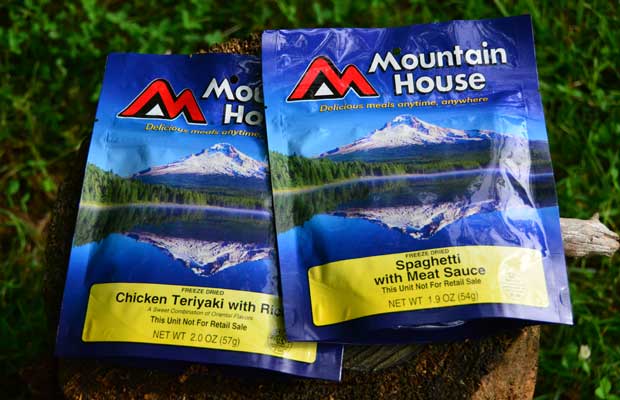 When it comes to long term food storage, there are several obvious candidates. In Prepper and Survival circles, we talk about storing grains in Mylar bags packed in 5 gallon buckets with oxygen absorbers, creating a pantry and canning fresh foods from your garden, MRE’s and freeze-dried foods. I have some of all of these options stored for our family, but some foods are great for other reasons, not just surviving doomsday.

You can probably take your 5 gallon buckets of rice, beans and grains to your survival retreat with you provided you have a car and aren’t walking on foot, but you can’t hike cross country with them. Canned food is great for storing and preserving fresh fruits and vegetables without the need for refrigeration, but you don’t want to take them camping with you. MRE’s are designed to feed troops in combat, but they aren’t the tastiest meals and are much heavier than other options. Freeze Dried foods excel both in storage life and they are incredibly light-weight. Not to mention, they won’t break if you drop them. Sorry canned tomatoes.

I was sent several packets of Mountain House Freeze Dried foods from Nitro-Pak. Nitro-Pak has been serving the prepper community since 1985, back before Prepping was a real word, and they offer a wide assortment of supplies you need to stock up on from freeze dried food to survival kits. Nitro-Pak sent me several pouches of Mountain House freeze dried food for review 2 months ago. I had meant to write a review last month, but life has a way of throwing obstacles in my way some times and in the chaos, I completely forgot. Luckily, I was reminded by the good folks at Nitro-Pak and since I had a camping trip coming up, I thought this was a perfect time to review the food they had so kindly sent us at The Prepper Journal.

But, another one of those obstacles appeared so the actual review was someplace closer to home; in the back yard to be precise. At least I was outdoors.

Freeze-dried food usually comes in meal form although you can get Mountain House individual foods if you are looking at making your own meals. When it comes to camping or a bug out bag, I want simplicity and like I said, light weight. Taste and nutritional value are definitely important too, but if they can’t meet the first two requirements, the last two don’t matter to me. My family has carried Mountain House freeze dried foods with us on several backpacking trips and they are usually my go-to meal when I am camping during hunting season.

The two meals I started cooking up were Spaghetti with Meat sauce and Chicken Teriyaki with Rice. Both meals as tested have 230 calories and are designed to feed one person.

The only thing that is required to make these dusty granules into a warm meal is hot water. You can either boil some over your fire, or use a camp stove. My favorite so far is the Jetboil Flash personal cooking system. This can cook larger meals with a bigger pot, but since I primarily use it for coffee and freeze-dried foods, it’s main duty is boiling water. I tried cooking an apple dumpling type meal one time for my daughter and failed to judge how quickly it would get hot, then burn… That is what I get for not reading the directions. The last thing you want to do on a backpacking trip miles from civilization is try to get burnt apple turnover mess off the interior of your main water boiling device.

Another great thing about Mountain House meals (and probably all the other vendors), is that you don’t really need any cookware either, except for a spoon. You can eat the meals, once rehydrated right out of the bag. Preparation is so simple that anyone can do this. Just open the package, remove the bag of desiccant, add the required amount of hot water, stir and close the bag up. For these two meals, I only had to wait 8-9 minutes which gave me time to work on boiling the water for my coffee.

How do they taste?

The question everyone wants to ask, is But how do they taste? I’ll be honest and tell you two things. First is that I was in the Army for a long time and didn’t meet too many meals (if any) that I could not eat. Secondly, I am not a food snob. Now, that being said, I won’t eat just anything and I am not afraid to say something doesn’t taste right, but you will never find me gagging if the leftovers are a few days too old if you know what I mean.

Every one of the Mountain House meals I have tasted have been great considering what they are. The Spaghetti had plenty of flavor and I really only wished I had about two packets instead of the one. Of course, I should probably only have that much food for a single meal, but if you are hiking all day and need to replenish calories, one of the other meals or a larger packet might work better. It is also the case that I received samples, so the real meal might include more food. Actually, it only stands to reason they would.

The Chicken Teriyaki was not as good (personal taste) as the Spaghetti, but as food goes, it tasted perfectly fine and I wouldn’t ever turn my nose up to either meal if I was offered them. Are they beautiful to look at? No they aren’t but this isn’t fresh food prepared by a chef. This is freeze dried food that tastes much better than it looks and can last on a shelf for up to 25 years. One of the great things about Mountain House is there is so much variety so if you have some favorites, stock up on those and leave the less desirable ones to someone else. My favorite breakfast meal from Mountain House is the Breakfast skillet. Loaded with potatoes, eggs, sausages and onions, it is my choice for cold mornings around the campfire.

I like Mountain House for camping but like I said, they are in my Bug Out Bag too because they are light and only require hot water. Some people will say, you may not have time to boil water so you need to take foods that don’t require anything to eat. I can see that point, but I say if you don’t have time to boil water, maybe you shouldn’t be eating either. Throw a snack bar in your pocket and go, but if you are being chased through the woods by the zombie hordes food is probably the last thing on your mind anyway.

If you are looking for a tasty freeze-dried vendor for your next camping trip, long term storage plans or Bug Out Bag, Mountain House gets my vote.

My son and I will be testing out several this weekend when we go on our backpacking trip in the mountains. We have a few different brands and am excited to see the differences. Not sure of the other brands names off the top of my head but they seems comparable nutritionally.

Have fun and enjoy your time in the mountains. Let us know what you discover!