Are Marauders A Credible Threat To Preppers? 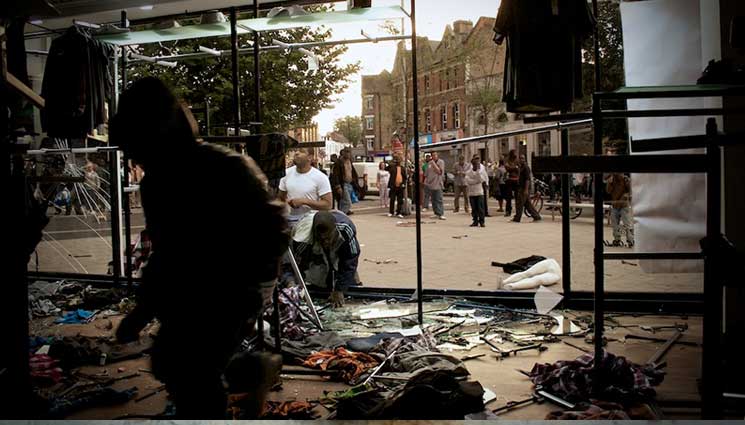 Since the premiere of National Geographic’s Doomsday Preppers season three episode ‘We are the Marauders’ there has been a lot of discussion on various blogs and even a couple articles addressing the show and this episode. All of the articles I read were highly critical of the episode, some essentially suggesting that National Geographic made a mistake airing the show.

The real question however for Preppers is; do so-called ‘Marauders’ pose any real threat to anyone who has made any investment of time and money into disaster preparedness?

First of all, let’s take a quick peek at Mr. Tyler Smith (if that’s his real name). Normally, you can’t judge a book by its cover; however in this particular case it wouldn’t be unwarranted.

As Mr. Smith’s photo above demonstrates, the best ‘innovative prep’ he could come-up with for his photo-op was nothing more than a total knock-off  prosthetic arm, exactly like ‘Merle’ wore on the Walking Dead (below)…

Then, moving on to his so-called strategy; …. Ok, what strategy?

It’s clear this man has absolutely no concept as to how to formulate a survival strategy. In fact, in addition to having no workable survival strategy, he violates many of the key concepts and teachings that are outlined in Sun Tzu’s ‘Art of War’.

Even in good times, the concept of engaging others who may be more or less trained and armed is not a sustainable paradigm. Sooner or later (likely very soon) Mr. Smith will be looking down at the side of his so-called ‘body armor’ and see his blood leaking out, just before he passes out; end of story.

The obtuse notion of going from place to place and attacking others for what supplies they may have is merely a movie concept and even in movies, doesn’t work out for very long, as depicted in the movie ‘The Postman’ with Kevin Costner.

It’s a plain fact that short-term and regional disasters are totally survivable with very basic training and supplies, especially since there will be help from nearby areas and various government and NGO organizations. It’s the long-term large-scale post disaster scenarios where things will get really dicey.

Since our population has far outstripped the sustainable carrying capacity of the land and its natural resources (the ability of the land to support people), there would immediate conflict for the very limited resources should our fragile supply chain infrastructure fail for any reason. It’s only by way of our highly leveraged technological infrastructure that we are able to import and distribute enough resources to prevent chaos, even in good times!

During such a large-scale long-term event (I.E. EMP leading to a Grid-Down scenario), everyone will be looking to relocate once the local resources are depleted. This may take anywhere from a few days to a couple weeks depending on the location and types of resources involved. Of course food, water, medicine, guns/ammo and other supplies will go fast. Once the resources are depleted, survivors may turn against each other, especially in areas with high population densities (Tacoma and Seattle Washington are prime examples). People who become desperate and who are armed are in fact the biggest risk to other survivors, including Tyler Smith. The ‘un-prepped’, as I call them, are in fact far more dangerous than any so-called ‘marauders’ due to their sheer numbers. Desperate people will do anything to survive. In fact, the masses of un-prepped who will be coming from all directions, day and night for many weeks and months may become the real marauders!

At this point, many survivors (the vast majority of whom will be well armed, and many will be former military) will logically attempt to relocate to areas that pose lower combat related risks, which would also ideally have more available resources (such as fresh water, fish and game animals).

However, there is only so much ‘promised land’, and there are too many people; three hundred thirteen million people! (313,000,000). Any way you roll the dice, there will be too many cranky and desperate people with guns in most locations. This doesn’t bode well for Mr. Smith or anyone else. The only way to mitigate this risk it to adopt the correct survival strategy.

So with all that said, in the event of a long-term large-scale disaster, Tyler and his band of followers (great example of the blind leading the blind) would be caught in the middle of a real meat grinder, where he and his gang will become just as big a target as everyone else.

Finally, it’s hard to imagine anyone with as much as a brain-stem going on national TV and telling everyone that they are actively engaged in a conspiracy to commit a felony crime. I’m no lawyer but I think that actively planning with others to commit any felony may in of itself be a felony. In Mr. Smith’s case, planning and training with weapons with the intent to attack others (in their town), before, during or after a disaster may be considered a felony crime, if not ‘menacing’, also a crime in most places. It wouldn’t surprise me to learn that some law enforcement authorities who saw this episode of Doomsday Preppers decided to serve an arrest warrant upon Mr. Smith and some of his band of merry men. And this wouldn’t be anything new; we’ve already seen several Doomsday Preppers having some encounters of the ‘third-kind’ with law enforcement officials.

I have to say that I was amazed by the high score (‘82’) that was awarded to Mr. Smith by Practical Preppers, LLC, who judge the show, and who seem to have suddenly opened the flood gates for ‘easy high-scores’ in season three of the Doomsday Preppers series. It seems that above all things, Practical Preppers, LLC continues to provide irrationally high scores for seriously flawed high-risk survival strategies, especially ones that embrace the over allocation of firearms and risky paramilitary tactics in lieu of logically superior low-risk survival strategies. If the show was titled ‘Doomsday Militias’, I could see more logic in their scoring, however this is supposed to be a show about preparing for disasters and ‘staying alive’ during and after such disasters. This new scoring trend certainly demonstrates a lack of scoring standardization between seasons, and does nothing except to further diminish the already tarnished image of Preppers in the eyes of the mainstream American viewing audience (and media), further fueling misconceptions about the majority of real Preppers. Quite frankly, from my own chair, I have to now seriously question the competency of Practical Preppers, LLC as so-called ‘experts’ when it comes to judging the show and other Preppers.

So, in the final analysis we see that Tyler with his Michelin-Man Home-Depot body armor may in fact become target practice for thousands of armed un-prepped evacuees (the real threat), and the other possibility is that he may in the meantime get a serious education in the criminal statutes of the State of Washington, possibly resulting in the confiscation of all his firearms, and maybe worse; remember David Sarti?…

The bottom line is: Mr. Tyler Smith and other so-called ‘marauders’ will in fact be totally marginalized by the sheer masses of other armed and likely better trained survivors and evacuees.

From my chair, being a true ‘Prepper; means you have a sustainable/workable strategy that is based upon a logical risk analysis, as outlined in this article.

And the hands-down ‘best strategy’ places you and your family well out of harm’s way… where combat is highly unlikely, since it is the ‘last resort’ (at least according to thinking people with actual experience).

I also believe Practical Preppers are starting to believe their own hype, legends in their own luchtimes if you will, as for Mr Smith he is not a Marauder, Buccaneer, Privateer, Beserker, Barbarian or any other historic reference he is just another idiot with a gun and no plan if he tried to play silly buggers either here in the UK or in KS where my friends live he would be wiped out within a minute.

I have often wondered about how much flack Practical Preppers must be getting. I think they are trying to offer an objective analysis, but some things are lost in translation. I also wonder if NatGeo doesn’t change the responses. It seems every good idea has a “However” and when the narrator says that at the end it always sounds like PP is saying they have an issue with some portion of the preppers set up. It may not be a “however” at all and it might simply be “have you also considered…”

I have been thinking about this subject a great deal since yesterday and I come to the conclusion the insanely high scoring system is done for entertainment value just as is the bulk of the show. Its not serious prepping, its not an educational program, its not a documentary its purely an entertainment show. Look at it this way after over 30 years of being a survivalist and prepper in the UK and US I have yet to come across one sensible member of our community who would completely blow their OPSEC by appearing on a cheap TV show. This… Read more »

We didn’t discover Doomsday Preppers until a couple of weeks ago when I saw something on Youtube. We are what you’d call ‘preppers’ and so we began watching the first season on Netflix. I think that while the people featured on the show are indeed ‘preppers,’ I also think NatGeo had skimmed the cream off the top and left us with oddballs for the most part. It just seems that in every episode, we think, “Can these people get any crazier?’ and then somehow, in the very next episode, someone is. They say a lot of psychologists watched the first… Read more »

You get it. The extreme sells on TV and that is what the media, in all its forms strives towards – sell the extreme to increase their Google Analytics to be able to charge more for advertising. The news media is the leader in this skewed model.

need to start your own series guest…pick some one out and see what they could come up with on a limited budget(as most preppers are)…show misstakes and successes…follow each month, like a series(reality tv)…

I learned more in 4 weeks visiting with American survivalists in the midwest in the 1990s than I did from 1979 to 1990 and from 1995 to 2013, There is immense amounts of skills, talent, common sense , expertise, craftsmanship in the ordinary every day survivalist community in the US, God knows why a supposed up market org such as Nat Geo cannot find a way of tapping into it without making prepping look like its loaded with gun nuts and retards.(still laughing my socks off at the UK premier of the DDP episode set in Alaska with the remote… Read more »

Tyler Smith was arrested in Jan after local authorities saw him violating his probation, a weapons charge from an earlier crime, on the show.

Mr. Smith must be inbred. In addition to not being able to come up with a plan of his own, he is a convicted felon. Any felon with half a brain wouldn’t tell anyone he has a gun, let alone the entire world! It would be poetic if the zombie apocalypse happened while his skinhead ass was sitting in jail