A Missouri filmmaker has assembled an eclectic mix of gardeners, natural builders, homesteaders, preppers and farmers who have at least one thing in common – they are not preparing to survive one calamity, but developing self-reliant skills to last a lifetime.

Producer Sophek “Sean” Tounn said the film, “Beyond Off-Grid,” is intended to wake folks up to the precarious nature of society’s modern grid and to motivate all of us to take direct action to reduce our dependency on the modern system.

Citing Hurricane Sandy as an example, Tounn said the contemporary way of living is not conducive to health or longevity. Many people have become too dependent on the government and others to help them outlive a calamity.

“This film is about living in such a way that we’re less dependent on outside entities,” Tounn said.

A 150-page work of fiction, “Henry and the Great Society,” spurred Tounn’s interest in simple, off-grid living about eight years ago. The story illustrates how a family’s happy, self-sufficient life is shattered after connecting to the grid and becoming consumers – unhappy, unhealthy, debt-ridden, overworked and dependent. 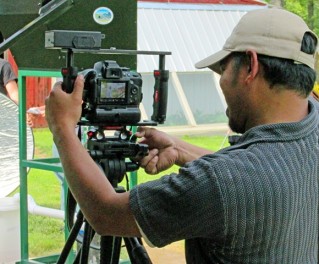 Sean filming Darren with the WaterBuck Pump here in May

Never forgetting what he read years earlier, Tounn contacted agrarian author Michael Bunker about the possibility of a documentary that would include aspects of Bunker’s book, “Surviving Off Off-Grid: Decolonizing the Industrial Mind.” Bunker was skeptical at first because he is approached often by producers who are solely looking for new or unusual material. When Bunker realized Tounn was genuinely interested in the lifestyle, he agreed to participate in the project.

Last year, Tounn began traveling the country to videotape specialists in a range of homesteading topics for “Beyond Off-Grid,” a documentary to inspire people to become self-reliant and return to the old paths. The film encompasses five major sections – family, food, history, natural building and water.

“People think of water as an unlimited resource, but they don’t realize how it is controlled by only about 10 major corporations,” Tounn said on a recent Preparedness Radio Network Secrets of a Survivalist program with host Rick Austin, author of the “Secret Garden of Survival.” Austin is featured in the film as an off-grid, permaculture expert, now in his third year of camouflaged forest gardening.

To be truly free, Tounn said, people must live completely independent of the grid – including the water, food and electrical grids. 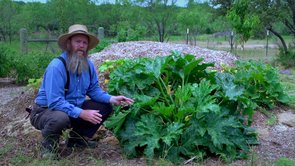 While Austin grew up in the country with an apple orchard and has gardened most of his life, he admits he didn’t have all the skills he needed when he embarked on an off-grid lifestyle in the Appalachian Mountains. Austin studied ancient societies to learn how they survived without electricity and refrigeration, relatively modern conveniences.

Meat still must be preserved if it is to be stored, but it does not need to be refrigerated, Austin said. People have known for thousands of years how to preserve food without electricity.

Like the others featured in the film, Austin said he is aggressively acquiring the skills to live off-grid comfortably and well fed now and for a lifetime.

Also on the radio program with Tounn, “Beyond Off-Grid” executive producer Jason Matyas, founder of True Food Solutions, said he believes the United States is in a slow economic collapse that could quickly accelerate. Instead of the modest 10-percent unemployment figure officially reported, Matyas believes the tally is more likely at about 25 percent overall, and 40 percent in areas such as Detroit.

“Government policies are only making it worse,” Matyas said of the unemployment crisis.

Unless people are growing their own food and establishing networks now with their neighbors to buy locally and in bulk, Matyas said, they may become nameless victims in a catastrophe. It does not matter how much gold you have if you can’t grow your own food, he said.

“If you opt for convenience over the work it takes to be self-reliant, you will forever be a slave to the system,” Austin added, explaining how some have questioned why he still spends time growing food and canning produce.

Others film participants include Cody Crone, who lives with his family off-grid in the Pacific Northwest. Crone, also known as Wranglerstar on YouTube, said he has taken a holistic approach to beekeeping, forsaking the protective suit and smoke, and has never been stung. 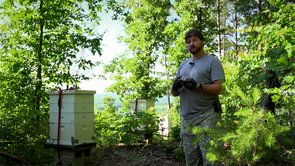 Another in the film is Scott Howard, CEO of Earthen Hand Natural Building, a company devoted to building homes of rammed earth, cobb or adobe gathered near the construction site rather than hauling in expensive, prefabricated materials. Even people who have no construction experience can sculpt their own house, Howard said in his video clip.

In another segment, permaculture expert Paul Wheaton of Permies.com, a large online forum site, said people are getting ill from high-tech solutions instead of using the low-tech remedies provided in nature.

Author Marjory Wildcraft, a former financial consultant who has traveled the world to speak to survivors of modern economic collapse, will explain, among other things, how to build self-reliant communities and embrace the lifestyle.

“Many people turn towards prepping and self-reliance out of concern for possible collapse,” Wildcraft said. “But really, this is a lifestyle that is ultimately the wisest choice for humanity. I’ve found greater and greater satisfaction and joy the more I let go of dependencies on the system.”

Bunker, who has authored several survival-related books, said most “preppers” simply store a supply of food and buy a generator with the mindset of “making it through to the end” of a disaster. Their idea is that life will eventually return to how it was before the event, he said.

That line of thinking is consumer-based rather than production-based, Bunker said, explaining the huge difference between prepping for a one-time disaster and incorporating a lifestyle of production.

When my husband, Darren Holliday, was filmed here in May, he related how many people also overlook the need to have a reliable way to get fresh water without needing a source of electricity. 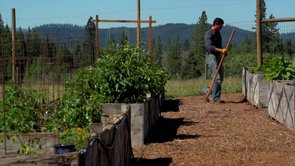 Cody Crone at his off-grid home

“People will spend thousands of dollars on a micro-grid system to run their whole house,” Holliday said, “but will spend as little as possible for a manual water pump. Yet, water is critically more important than convenience and gadgets.”

Tounn said the film is slated to be released late this year or in early 2014, but needs financial support to be completed on time. So far, most of the funding has come from those involved in production.

To learn more about the film, see video segments or to donate to the project, visit www.beyondoffgrid.com. To see more photos, visit our earlier blog. Also, you can read my first blog on Mother Earth News about this exciting project. Donate $30 or more, and you’ll get a copy of “Beyond Off-Grid.”
[divider_1px]

gBDl – Recently I was down on cash and debts were killing me from everywhere!! That was Until i decided to earn money.. on the Internet. I landed on surveymoneymaker d-o-t net, and started doing surveys for money, and doing so, i have been much more able to do my things!! i’m so glad, that I did this!! With all the financial stress these years, I really hope all of you will give it a chance. – j6S

I love watching movies a lot. These days its become very easy to watch any movie or TV show using USTVNow app.

This was a great article, thank you so much for sharing. It really helped me a lot because I am new to etsy and I am having some of the same doubts and struggles that you had. I know to stay positive and keep working hard and it will all come together!