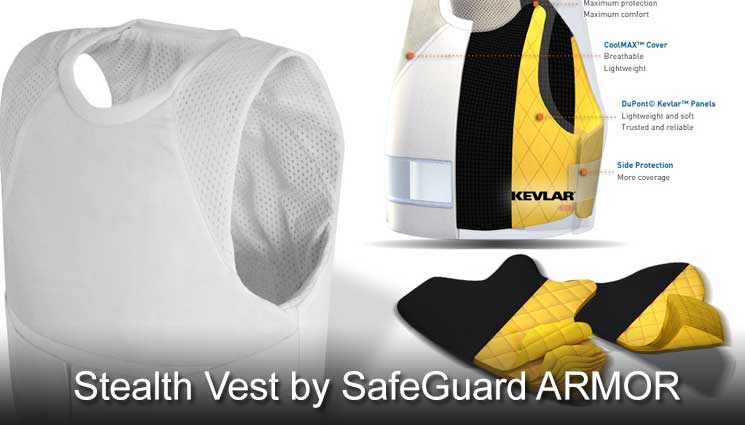 A couple of weeks back I was contacted by SafeGuard ARMOR asking me if I would like to review one of their bulletproof vests. Not being one to turn down an opportunity to test some equipment that could be of use to Preppers I jumped at the chance. A few short days later, the FedEx man dropped a nice black bag on my door. Inside was SafeGuard’s Stealth vest. The Stealth is designed to be concealable and worn under clothes. This would be great for undercover police, bodyguards or you. That’s right, the average every day prepper could have a use for body armor and this may be a good option to consider if you are in the market for a bulletproof vest.

Why would you possibly need body armor? I can think of a million scenarios why you could need and use extra protection from life threatening injury. Do you have to be a Blackwater contractor running operations in Afghanistan? No, anyone can benefit from protection and a concealable vest like the Stealth allows you to have a line of defense that doesn’t draw attention like a full paramilitary rig. What kind of protection are we talking about here? Bulletproof vests as the name imply give you varying levels of protection from bullets and in the case of the Stealth, knives also. If you are ever in a disaster where the Rule of Law has disappeared completely it would be smart to have protection for your family. If you can foresee a future where it all goes sideways, the added protection of body armor could save your life one day if the bullets start flying.

The vests from SafeGuard ARMOR are made with DuPont™ Kevlar®, which has been the leading material used in body armor construction for over 30 years. Kevlar is the registered trademark for a para-aramid synthetic fiber. Developed at DuPont in 1965, this high strength material was first commercially used in the early 1970s as a replacement for steel in racing tires. Typically it is spun into fabric sheets and the vests simply take a lot of these sheets in combination to form a protective barrier.

Since this vest was designed to be worn under clothes I was curious as to how it would feel. I had worn the older style Bulletproof vests in the Army (I know there is a big difference) and remembered how bulky they were. This vest was light at only about 5 ½ pounds and much thinner. The SafeGuard ARMOR website sizing section put me right in the middle of a Large and an Extra Large so I ordered XL and it fit perfectly. I slipped the vest on over a t-shirt and then put another shirt on top of that. I could personally see that I was wearing something, or else it looked like I had been packing on the pounds over Christmas more than I remembered, but to the casual observer who didn’t know me, the difference in appearance was really minimal. This vest could easily be worn with a slightly larger shirt and no one would know I was wearing body armor unless they got really close. I think this is similar to carrying concealed. You, knowing you have a firearm on you makes you think that everyone else knows also, but it is just your imagination.

The Stealth vest was very comfortable. The lining was smooth and the weight as I said was hardly noticeable. This could easily be worn all day in most environments without any discomfort at all. My vest came right above my belly button standing up, which meant that when I sat down; it didn’t dig into my legs and cause the vest to rise up. My vest fit perfectly and I would imagine after a few hours/days use it would be something I wouldn’t even think about anymore. Would this get hot in the middle of August? Yes, but what wouldn’t? I can be hot in nothing more than shorts, but the vest has a thin weave that makes it more breathable and the tradeoff of protection versus comfort is won by protection in this instance.

SafeGuard’s body armor is certified by the NIJ. NIJ stands for the National Institute Of Justice, and is the department responsible for testing body armor in the U.S. I assumed that the body armor would stop a bullet, but I didn’t want to simply rely on testing data on a website. If I was going to go on The Prepper Journal and make a product recommendation, I wanted to see this for myself.

The Stealth vest that I received was rated at a Threat Level II which on SafeGuard’s site shows a round type of .9mm 124gr FMJ or .357 Mag 158gr SJSP. I will be the first to admit that our test was not anywhere near as thorough as the NIJ, but we did fire actual rounds into the vest to see what would happen.

There is a video of the results below. I will tell you now, that I am not Stephen Spielberg and we don’t have a budget for high dollar videos.

Our simple test proved that the Stealth vest did indeed stop bullets. I was going to stab it with a knife also, but I was sure our test subject wouldn’t be as good with stabbing. After the test we cracked open the vest and I retrieved 4 of the rounds we fired at the vest. One round actually went under the vest and hit the back panel. The round in the back panel was captured also, but I didn’t fish that one out yet. My daughter was on the other end of the pistol in this video.

You can see from the photo to the right the mushroom and the fabric that caught them. Test successful in my opinion.

I would wear the Stealth vest and feel confident that it would stop small arms rounds. I tested this personally with .9mm ball as you can see in the video. The level of protection in the vest I tested would only stop .9mm or .357. I would have to consider the situation I thought I would be in before choosing a protection level. I would probably opt for the level III protection which is supposed to stop a .44MAG if I were going to order this vest.

As tested, this vest is $476. I checked a couple of other sites and the price is definitely competitive with other body armor out on the market. If you are looking for a vest that provides excellent protection, is concealable and comfortable, the Stealth vest from SafeGuard ARMOR is a great choice.

Where does having body armor fall in your list of priorities? That is a great question to ask. The answer is going to be based on your own individual lifestyle, location, resources and threat assessment. I would say that body armor falls in the security category, but does it come before you have stocked your pantry with a decent supply of food for your family? Does this come before you have purchased firearms for securing the safety of your home? Each of you will have to answer this question on your own. When you are ready, SafeGuard seems be be a great product at a reasonable price. It is on my list now.

Great video, Mr. Henry! Mr. Spielberg may have nothing to worry about, but the regular crowd at Cannes……? I was relieved to see that no teddy bears were harmed during filming of the video, given the uncanny resemblance to a certain co-star of Mark Wahlberg. 🙂

Thank you very much Larry! It was our first review so hopefully they will get better as we grow. Thanks for watching. That bear did have it coming though…

On a more practical note, what is necessary to care for these vests? I’m thinking about keeping the vest clean. I doubt it’s machine washable (or is it?). What do you do if you’re wearing the vest, at a neighborhood cook-out say, and someone bumps you and you spill your chili and adult beverage?

I read on the SafeGuard Armor site somewhere what the cleaning requirements were, but am having a hard time finding them again. Essentially, it said the fibers in the kevlar shouldn’t be immersed in water. When immersed their effectiveness was reduced, but would return again when dry. If you got crazy at a cook-out, I would wipe off the vest and let it dry before heading into a gun fight. 🙂

Thanks for getting back to me, Pat. It’s been crazy week (check out my blog). I had assumed it was something “like wipe with a damp cloth or sponge and let air dry”, but wasn’t sure.