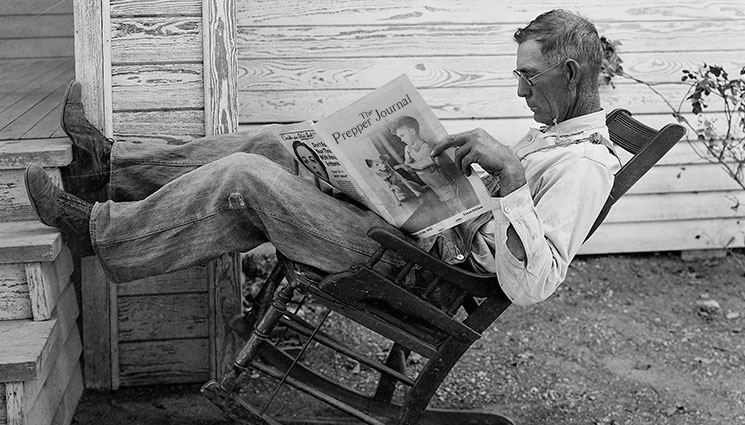 As of right now, only extreme weather affects our daily lives, but in a doomsday scenario we would need to know the weather to properly adapt shelter, make sure our rain barrels are ready, or to know the right time to plant our seeds for the garden.  In the event of a coming disaster you should have already purchased a solar charged or hand cranked radio equipped with NOAA.  Ideally, this would provide a way for you to hear news from the outside world and let you know if a giant hurricane or tsunami is headed in your direction.

Even with those resources, every good little prepper should have a back-up plan for weather prediction in the event the hand radio had to be used in defense against a hoard of zombies, or there is no one left to broadcast the weather and tell you the latest news (cue in eerie, dark music).

Believe it or not, humans have found ingenious ways to predict a coming weather event for centuries.  Long before Doppler and satellites, people used animals, their senses, smoke, and even a cup of coffee to tell the temperature or forecast a coming storm.  Here are a few tricks and tips (none of these are foolproof or guaranteed but the last time I checked the Weather Channel wasn’t throwing out guarantees either) that may give you an edge when preparing and provide you with the knowledge you need to plan and protect your family and belongings from a weather event.  If nothing else, you can wow all your buddies at the next cookout.

Bubbles in your coffee

Pour a cup of coffee into a mug and watch the bubbles form. If they move rapidly to the cup’s edge, expect good weather. But if the bubbles stay in the mug’s center, clouds and rain could be on the way.

The reason? High pressure pushes the bubbles to the edge, and high pressure is an indicator of good weather.

Can your body tell you when it’s going to rain? Arthritis pain and physical discomfort kick in when the barometric pressure changes. It seems Grandma wasn’t lying after all.  Many people with joint diseases, bad teeth, recently healed broken bones, and even corns and bunions report feeling aches as the barometer drops. Low barometric pressure often indicates that clouds and rain are on the way.

Sinus and facial pain caused by changes in the barometric pressure can also be an indicator that precipitation is coming. The pain can become so severe that it can even lead to migraines. Headaches can also indicate other weather conditions such as extremely hot or cold temperatures and high winds.  It can also mean that your wife just isn’t that into you.

When a storm is approaching it’s believed that birds fly lower in the sky. This may actually be the case. When the barometric pressure drops, flying at great heights becomes difficult for birds. The pressure drop is also believed to hurt birds’ ears, prompting them to fly at a lower altitude.

Counting the number of times a cricket chirps can be a surprisingly accurate means to determine the temperature, because a cricket’s metabolism changes as the temperature changes.

Try this next time you are out on a warm summer evening.  Count the number of times a cricket chirps in 14 seconds and add 40 to that number. The resulting number should come close to the temperature in Fahrenheit (I apologize to all my metric friends, you will need a piece of paper to do the conversion).  And, if you are single, this will surely win you some points with that lucky lady or fella.  If nothing else, you can prove you can count and do basic arithmetic.

News flash – cows aren’t just lazy when they lie around in the grass.  Anyone who has lived near farmland has heard the notion that if cows are lying on the grass, rain is coming. While it’s not a perfect predictor, there could be truth to the theory. Animals are known to be sensitive to changes in barometric pressure. Some experts theorize that cows sense those changes and lie down so they are positioned on a dry spot of grass before the storm begins.

If you can’t hear the sounds of cicadas when they’re normally causing a racket, it could mean that rain is coming. The reason? Cicadas can’t vibrate their wings easily when the humidity gets high, and high humidity can mean rain. So the cicadas’ silence can indicate rain is near.

Have you heard this old saying about horses?

Turns out, animals tend to graze with their rear ends pointed toward the wind.  Don’t we all?  A westerly wind usually indicates good weather, while an easterly wind sometimes means bad weather is approaching.

The saying, “Trout jump high when a rain is nigh,” could have some truth to it. When air pressure drops, it could cause trapped gases on the bottom of a body of water to be released.

This release causes microscopic organisms to disperse into water, which prompts small fish to start feeding. The small fish attract larger fish that prey on them. Eventually, all this feeding can cause such a stir that the fish start jumping.

Ever notices animals acting strangely?  I have, especially when our cat won’t stop mewing because she needs filtered ice water and her food is an hour old.  I hate that cat.  But if you notice anything amiss with animals that dwell underground, the behavioral change could predict a major seismic event. Before a disastrous earthquake in Italy in 2009, a colony of toads mysteriously evacuated its pond. Similarly in China in 1975, hibernating snakes emerged from their holes prior to a major quake in Haicheng.

Scientists surmise that ground dwelling animals can sense a chemical change in the groundwater caused by rocks in the Earth’s crust releasing charged particles. The disturbance can lead them to seek safer havens.  So if you find toads in your bed, you better look out.

This saying dates back thousands of years and I have heard my mother repeat it many times so I know it has to be at least a thousand years old (sorry, mom). There may actually be scientific truth to it because weather tends to move west to east in the Northern Hemisphere.

A red sky at sunset will most likely result in beautiful clear skies, indicating that high pressure will keep the storms at bay.

If the sky is red in the morning, the sunlight from the east could be revealing moisture in the air, indicating that a storm is coming from the west.

A Ring Around the Moon,
Rain or Snow Is Coming Soon

The visible ring sometimes appearing around the sun or the moon is a result of ice crystals in cirrus clouds refracting the light off these celestial bodies. Since cirrus clouds generally indicate foul weather to come, you can assume that it is time to start waterproofing.

Rainbows in the Morning Give You Fair Warning

There isn’t always gold at the end of a rainbow, sometimes there is a storm. A rainbow in the west in the early morning hours could mean the sunlight from the east is striking moisture. Moisture could indicate a storm is approaching

Keep in mind, light winds or breezes don’t necessarily indicate foul weather, but if the easterly winds grow suddenly strong, it can be an indicator of a shift in barometric pressure, another sign that a storm is approaching.

When clouds appear like rocks and towers,
The Earth’s refreshed by frequent showers.

Tower clouds, or cumulonimbus, as they’re known scientifically, can indicate that severe weather is approaching. Also called thunderheads because of the extreme weather they tend to precede, the clouds gain their flat-topped shape from high winds and often have dark bottoms.

Wind direction can tell you a good deal about the weather. Easterly winds can indicate a storm front is moving in, while winds blowing west mean good weather.

The nose always knows. Prior to a storm it’s possible to smell the scent of ozone, a sweet odor, being carried to lower altitudes. Meanwhile, during a low pressure system and rain, molecules from decomposing plant matter are released from the surfaces they’ve attached to, such as soils, and often smell like compost, which can also indicate rain.

Everyone is familiar with that smell that occurs after a good summer rain, when the air is rich with the smell of plant life. This is a result of an increase in air moisture or humidity, which drastically increases the strength of smells in the air and the distance they carry.

When ditch and pond offend the nose,

Look for rain and stormy blows.

Smoke gets in your eyes

All of these tricks are not scientific, of course.  They are simply good indicators of possible weather proceedings.  If you really want to ramp up your meteorologist skills, a barometer might be on your short list of emergency supplies for a looming catastrophe.

Clouds are an excellent indicator of weather that can be used in conjunction with the methods above. For a really great site with detailed information and photographs you can visit the Section Hiker site.

Tools of the Trade: The Barometer

Although, using nature and animals can be helpful, some signs cannot be properly read or measured without the proper tool.  With a barometer, you can measure atmospheric pressure that will provide the warning you may need before a cataclysmic weather event.  Basically, a barometer tells if there is high pressure which indicates lovely weather abounds, however low pressure will signal wet weather is around the corner.

First things first.  Most barometers are aneroid barometers and contain zero liquid.  They do, however, contain a spring which is calibrated using a dial or knob located in the back.  To calibrate properly, go to  http://www.weather.gov/ to get your local weather.  It should include the current barometric pressure and you should adjust your barometer accordingly.

Once your barometer is calibrated, you can reference the following which was taken from Skills for Taming the Wilds by Bradford Angier.

Note: These measurements only indicate proper pressure for the U.S. and Canada. I apologize, but invite any of our friend across the pond to submit any weather folklore or barometer guidance in the comments below and we would love to post it.

Thanks for this info. We have indeed overlooked this skill. I remember that whenever it’s about to rain, cockroaches seemed to be crawling out of nowhere.

You’re right Rosey! I had forgotten about that. We have some big cockroaches that seem to appear at certain times when I want to take a shower in the morning. I thought it was just the crumbs on the counter from my kids, but weather makes much more sense.

Wow! I liked this one – very useful.