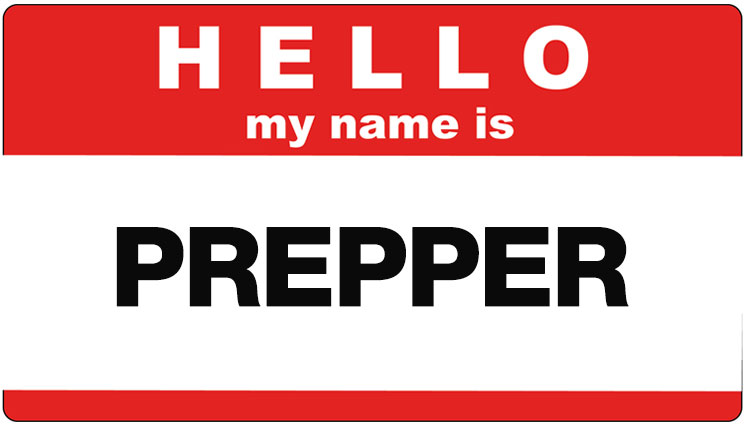 That sounds a little odd when you say it out loud at first doesn’t it? Have you said those words out loud yourself? I mean really said them to anyone other than your family or spouse or the dog? “I am a Prepper”. It is sometimes at this point my mind wants to start whistling the old Dr. Pepper theme. I’m a Prepper, he’s a Prepper, she’s a Prepper. Wouldn’t you like to be a Prepper too?

In the past year or so I have been more open in public about my belief that we should all be more prepared. Prepared for what? It could be anything from an EMP attack, flood, Global banking collapse, mutant zombie bikers from mars, polar shift that reverses the Earth’s magnetic field or just losing your job. It is easier and more accepted now than ever to talk about how you are concerned about current events, politics or our government’s growing encroachment of our liberties. Some thanks must go to Doomsday Preppers for raising the dialog on a national level at least.  You can casually bring up topics at work or church and easily point to current events to back your theories about purchasing extra food or stocking up on some gold and silver and fewer people look at you like you have antennae sticking out of your head. That was once taboo but there is a step too far. You hold back just a little in front of your casual friends and acquaintances and don’t let the cat completely out of the bag, do you?

It is hard (for me at least) in all settings to proudly come out of the Survivalist closet wearing my cross draw vest, thigh-rig and scream through my NBC filtered mask “MMYY NMRMM NA DREDDNAR” which translated outside of the mask is “I am a Prepper!” I can say almost everything but that, in “polite society”. Whenever the subject comes up and we are talking about Prepping in a group of people at work and people ask “Are you one of those Doomsday Preppers?”, it goes something like this “I’m not a paranoid whack job, but I do have some extra food stored up; just in case, you know”. It’s easier to avoid that subject, save face and live to fight another day right? I just chalk it up to practicing good OPSEC.

I realized a while back that not being able to communicate and talk freely with other Preppers wasn’t the smartest way for me to form bonds with other people I could learn from and possibly count on if the SHTF, so I decided to try a Meetup group.

For the uninitiated, Meetup.com is a place you can go to find people who have common interests and who meet in groups to share and discuss these common interests. You enter your city, put your distance in and search for a topic. The topic of Preppers alone generated pages and pages of groups all over the country. I stopped looking eventually, but there literally hundreds to choose from and I quickly found one near my area. There is even a smart phone app that allowed me to totally manage my meetup information and meetings so I was in business.

I signed up with Meetup and joined my local group and stared to look for meetings they had coming up. I found one that was the next week and entered this into my app. It was pretty simple and I was even able to look at some of the other people who were in the group too and started to get a warm and fuzzy feeling because their likes and concerns and language was just like mine! They were throwing words like “Prepping” and “organic gardening”, “self-sufficient”, “solar power” and “off-grid “ all over the place! It looked like I had found the right group of people and the Meetup App said 10 people had RSVP’d. Finally some people I could talk freely to about all of my concerns and hobbies and interests.

The night of my first meeting, I have to admit I was a little nervous since I hadn’t met any of these people before. It was like walking into a bar all by yourself. Well, maybe not quite like that but you get the idea. The leader of the group had sent a nice email welcoming me  and offering a phone number I could call with any questions, but you are still walking into a completely new environment. What would the people be like, I wondered. Is my fly opened? How’s my breath?

The meeting was at someone’s house and I used my GPS to get there, which reminds me I need to post about using maps and not relying on technology so much at some point. Regardless, I arrived to the location and there were a lot more cars than 10 so I started to wonder if I was at the right place. I figured it had to be right because people were walking in with their own chairs and notebooks; some guys had camo on, so I was pretty sure this was not a Tupperware party. I followed another person into the building and the meeting was already going. I walked in the door, scanned the room and saw it was packed! I spied a free corner in the back and navigated my way through the crowd and set up my chair. There had to be 30 people at least.

The discussion was already going about Herbal remedies with common cures for stomach ailments that are easily found in your yard and we got a homework assignment to bring in some weeds from our own yard for show and tell at the next meeting. I should have no problem with that! The leader covered a lot of topics from herbal remedies using egg shells, to cost saving ideas for your house. There were other speakers who spoke on other topics and one gentleman even demonstrated how to make a paracord bracelet to the group. Cordage was passed out and we each got to make our own to various degrees of success. Mine didn’t quite turn out the way I wanted it, but I brought it home to work on that, along with my weeds to bring back. There were plenty of people who offered to help and the whole environment was very comfortable from the beginning.

Throughout the meeting we got off on other topics of course like Organic gardening and CFL bulbs and Smart meters so I was definitely in my element here. Everyone was engaged in the meeting, asked questions, was very polite, nice and welcoming and when it was over I got to meet several people. There were a few people who had their own businesses related to Prepping. One man was selling Solar Panels and another woman was a Thrive freeze dried food representative and I don’t have any problem with that. If I was going to buy anything, I would rather buy from someone who I knew than a stranger. The crowd that was there didn’t run out the door when the meeting was over, they stayed around to mingle and meet or spend time with new friends. I met a few new people and think I will go back to the next meeting to learn more.

Which all brings me back to my original point. I know this is only my first meeting and it isn’t like I met any soul mates here, but I did meet a lot of people who seemed to share the same interest I have in being more self-sufficient and making sure my family is prepared for whatever life may be throwing our way soon. I also met a lot of people who I am positive wouldn’t blink an eye if I stood up and shouted out loud and proud, “I am a Prepper”.

Names and places have been left off here because… wait for it… “I’m a Prepper”!.