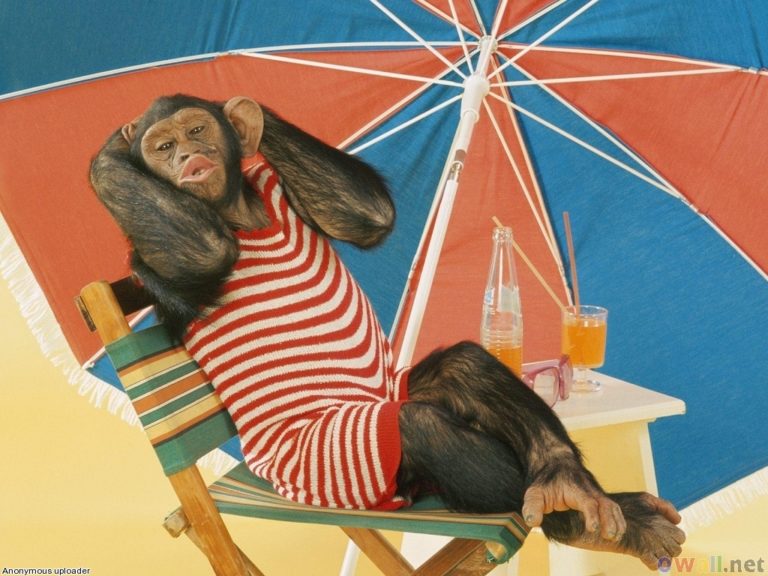 Let me preface my argument by saying that I love all animals.  Except maybe rabid ones.  I don’t swerve to hit kittens and I always break for squirrels even when it compromises the stability of the latte I am holding in my hand.  As much as I adore animals, I hate government waste.  Waste as in, spending my valuable tax dollars on programs to entertain, house, and coddle chimpanzees when Congress cannot balance a budget.

Recently, I became aware that our Congress passed the Chimp Act in 2000.  I have to be honest and tell you that I even feel ridiculous in typing those words.  I am sure someone in Finland is rolling in the floor laughing at the insanity that is the state of the U.S. government.  This act takes tax payer money to fund retirement islands of lush green grass and palm trees surrounded by moats for chimpanzees who have been used in testing, are unwanted pets, or were used in the entertainment industry.  Yes, we taxpayers come to the rescue of that poor, pitiful entertainment industry.  NPR, with much liberal empathy and compassion (apparently , this oozes forth when taking government dough) interviewed James Anderson from the NIH and this is what he said without bursting into hysterical laughter:

“Congress set a cap of $30 million on total spending for construction and care of the animals in the sanctuary. And we are already over $29 million,” Anderson says. “We’ll hit that cap in July of this year.”

It will take Congress to fix this. In the meantime, because the spending cap only applies to sanctuaries, one option is for retired chimps to just stay in research facilities.

“And we could continue to use taxpayers’ dollars in that context to take care of them,” Anderson says.

I know, $30 million is a drop in the bucket at this point, and the debt is so astronomical that the government figures no one will notice if they continue to fund such sanctuaries.  Congressmen and women will whisper to one another in exclusive congressional elevators, “Hey, I’m bored with spending money we don’t possess on the defense and general welfare of our constituents.  Let’s binge and lavish monkeys with luxuries!”  But wait, this story spirals even further as it delves into the details of the care provided:

Taking care of one chimp, per year, costs around $15,000, she says. This is comparable to what the NIH might pay to house a chimp in a research setting. There’s a huge amount of work involved in caring for these animals.

Save the Chimps has about 50 employees to do endless chores. They hose down indoor rooms, prepare food and do the laundry — the chimp’s brightly colored blankets and teddy bears hang on clotheslines to dry.

Every day, workers go out on the islands to scatter treats and toys. One day’s entertainment, for example, was long sheets of paper smeared with ketchup and mustard.

And then there’s the medical care. The sanctuary has a medications room that’s stocked like a full pharmacy, where two women crush pills into plastic bottles, each labeled with a name — so it can get filled with that chimp’s preferred juice or Gatorade. About half the chimps get daily meds for everything from arthritis to heart disease.

Do we care for our senior citizens this well?  Last time I checked, our president suggested that we give grandma a pill and put her out of her misery.  I bet grandma might perk up if she had fuzzy bears, blankets, and somebody encouraged her to paint pretty pictures with condiments.  The government, however, prefers to neglect grandma and instead provide monkeys with housekeepers and servants like they are on Fantasy Island.

I am going to attempt to be transparent and admit that when I first heard this story I had a twinge of jealousy.  There have been days when my kids were out of control and driving me crazy, I burned dinner, and the septic tank backed up into my shower and I wished I had a sanctuary.  But there is no escape for me, because I am a lowly, law-abiding taxpayer.  I am a chump, not a chimp.