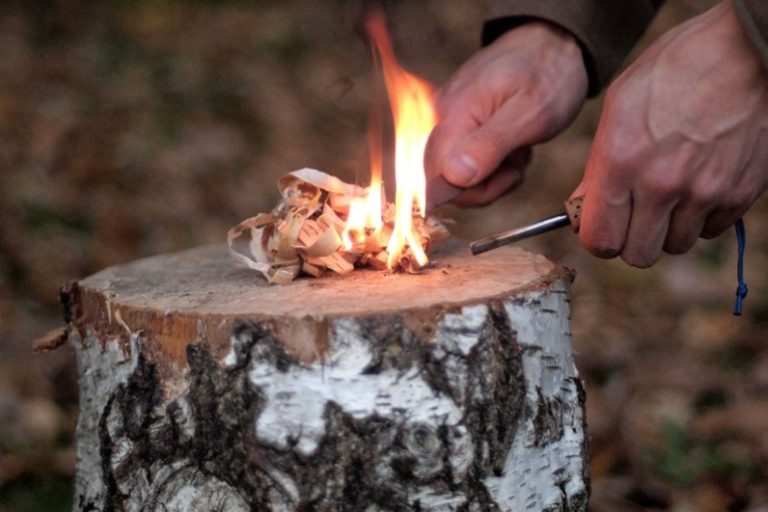 One of the things that has made us a successful species is our ability to wield fire. Getting a fire started and variations to make them efficiently and specific to purpose have huge benefits in survival settings and off-grid, no- or low-power scenarios.

Some of the information out there gets used and passed along without a lot of consideration to the conditions, though. I think sometimes we’re just looking for a DIY or a “craft”, especially if we’re on a tight budget, and don’t really test or think it through before we go whole hog. Sometimes we’re overlooking something even more compact or versatile. Sometimes, having two parts to a whole still separated has a lot of value.  And sometimes, I rarely even see the most effective helpers mentioned. 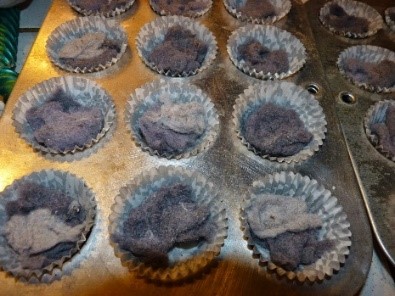 One of the things I see constantly is using dryer lint (and makeup pads) for fire starting. It regularly makes me crazy. It’s just that it’s not the be-all fire starter – alone, or with the addition of wax – that it’s made out to be.

Hey, I have some. Bags, front seat of truck, grill kits. Plain lint can be enormously helpful for catching a spark … if you also have other tinder ready and waiting.

The lint (and cardboard) catch first. Lint is a smoldery or flare-up catch, depending on your laundry. The amount and type of cardboard used around the lint extends the burn time a little.

They don’t actually burn long enough to “catch” charcoal, arctic stove bricks, or most kindling sticks, especially in wet or windy weather. You still largely need a feather stick, twisted wads of paper or cardboard, dry grasses, or hen-of-the-woods innards – the same tinder sources you’d use to nurture a spark or match if you didn’t have any handy fire starters. 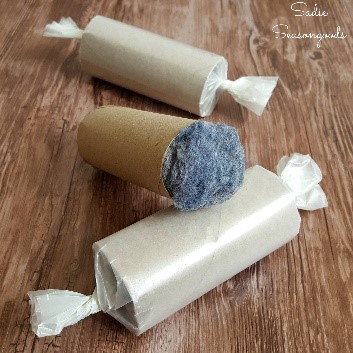 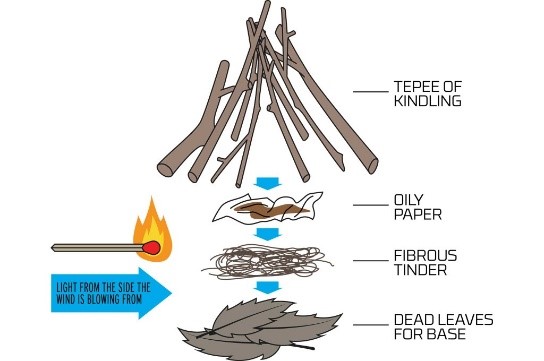 It’s largely a waste of wax and time to make the “better” versions – where you pack an egg carton or muffin cups with your dryer lint and then pour melted candles, paraffin, or beeswax over them. Those versions are actually even tougher to get started with strikers, paper matches, and Bics, too.

You’ll have a lot more success getting fire helpers like wax cakes and the wax-dipped makeup pads started if you scuff them up good before lighting, even if they’re in cupcake wrappers or egg cartons or combined with cotton strings trimmed from clothing or used garden twine that are supposed to be helping you there.

I guess if you used a big chunk of the egg carton, not just one lobe, it would catch kindling directly. That’s not exactly portable and it requires a big stash of egg cartons for your doomsday or autumn-spring wood stove. 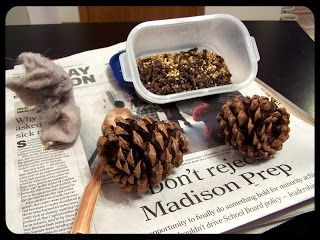 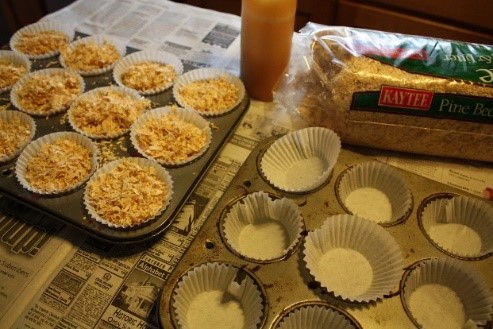 You can improve them – enormously, into something that will burn longer and hotter. Just add some wood shavings, fine chips, sawdust, or some pine cone bracts to the dryer lint. The thin wood is tinder, and dry pine cones are some of the best tinder-kindling to be had.

Even so, skip the wax. You don’t actually need it and it can get messy. Just smoosh it all into TP rolls or egg carton sections with your dryer lint, or snag small pine cones and wedge dryer lint into the gaps.

If you’re dead set on waxed versions, make doubly sure they’re in tight-sealing plastic baggies if they’re in your vehicle. 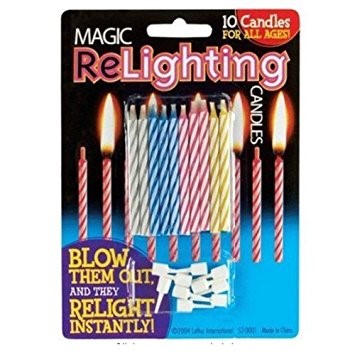 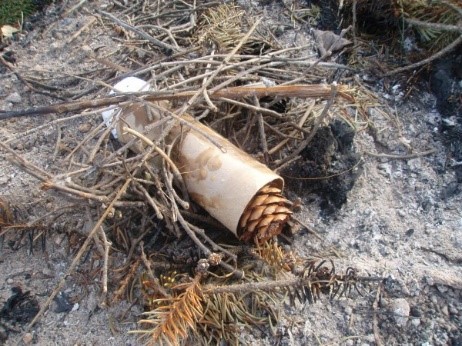 I carry un-waxed versions, but I also use tea lights and birthday candles a lot for campfires and bonfires. Those “gag” candles that don’t actually go out are a goldmine for a backpack and pill bottle kit.

My candles will typically burn long enough to dry out even damp tinders and kindling without issue. If it’s particularly damp and wet, if I’m particularly rushed to get a fire going, I’ll use both, a candle and a backup or emergency fire starter. 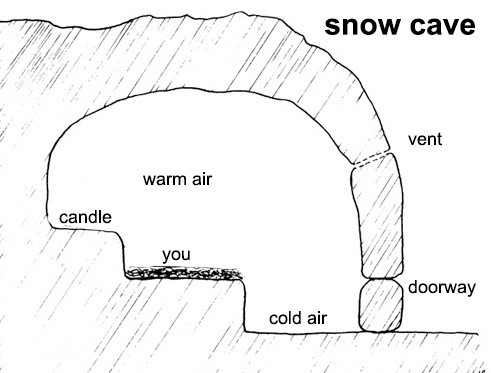 If I need to be under a quickie shelter, I can still use my candles inside a can or a jar – for cooking, to very effectively take the damp or chill off a small space, for light. I can also use a match to light a tea light or birthday candle, and then light others from that stronger flame.

You lose those options when you melt your candles or paraffin into disks of tinder helpers. 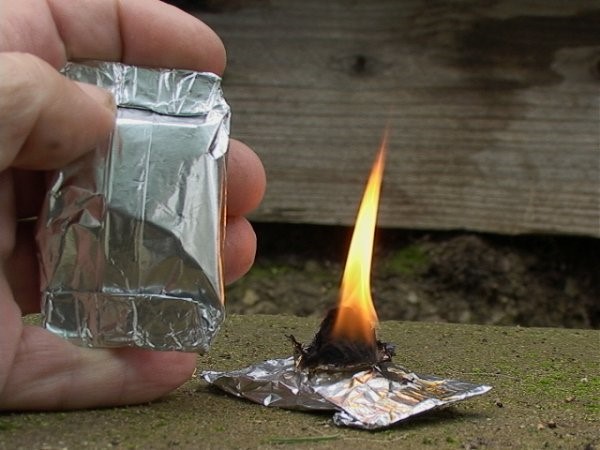 I like “foil fire nuggets” a lot. Again, it has to do with versatility. The petroleum jelly dipped cotton doesn’t run in our heat, and it doesn’t evaporate as fast or as much as hand sanitizer or stove alcohol. You can control how big a hole you create, and how much you pinch out, which affects how big of a flame you have – which impacts how long each burns for.

The foil provides “handles” for moving them, and can be shaped to help protect them from a draft or to reflect light one way or another. The foil also gives you a somewhat “safe” zone around your “candle” that increases the times and places it can be used. 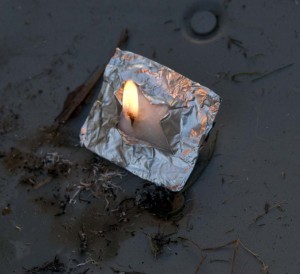 They’re nice for starting fires, and they’re also nice as “candles”. Because they’re small and contained, they’re suitable for times you’re in a small shelter without a lot of room. Stick them in a metal or glass bowl or cup, and you can have light for 3-5 minutes.

They’re not as effective as something like a votive or 4-6” emergency candle for burning off some of the damp and warming a tiny space, but if you make them with two or three balls instead of just one, or set up a couple more, they have applications for getting inside and set up or drying out tinder and kindling.

Now, if you’re inclined to soak them in hand sanitizer, I’d say hold off. You can carry the two parts separately and just combine when ready. I’m also not high on waxed versions of cotton balls or tampons – again, unnecessary steps (and mess), more costly ingredients, single-purpose items, and the scuffing-up step before you use them. Without the foil, they also burn too fast to dry or ignite many kindling. 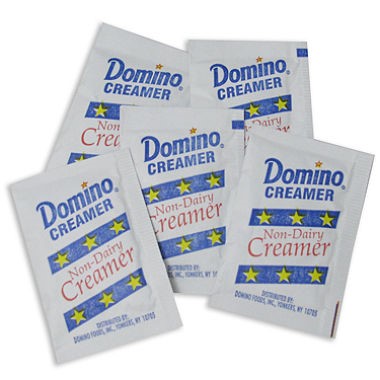 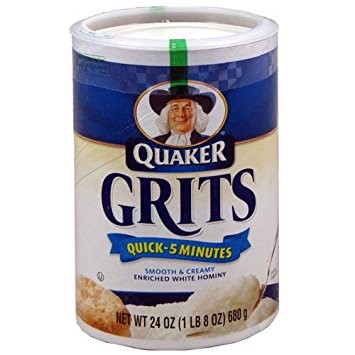 If you’re looking for something else to help your fires along, check out your kitchen cabinets and the packets available at fast food restaurants and hotels when you get coffee.

I by total accident discovered that grits are enormously flammable when I sneezed and spilled half a tub across a flat-top electric stove. The grits hit the still-hot stove, and while the little isolated and single-layer bits just glowed and cindered and extinguished super fast, the grits that landed in lines and lumps went up like I’d been scraping magnesium. Some of the dials were actually deformed from the heat

(The glass stovetop recovered from this misadventure like a champ.) 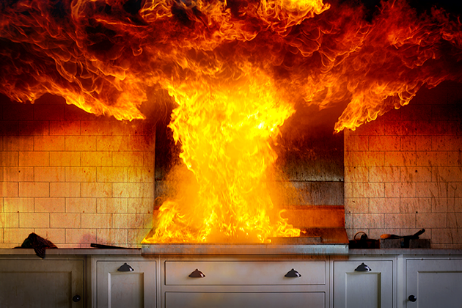 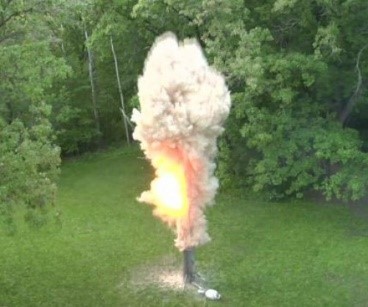 The other oddball I pretty much never see is powdered coffee creamer. It comes courtesy of Mythbusters.

The “B” (better) team were doing one of their tests of viral videos, seeing if you really could create an enormous mushroom cloud with a sawdust cannon, and tested other whoosh! options. Carrie (I believe) tested coffee creamer.

Creamer has benefits. It’s also a little scary. (Test this after it rains, peeps.) Like the magnesium rods we can scrape to add oomph to our sparks, powdered creamer is a flare-up kind of helper.

To say that a little goes a long way is an understatement. You only need a little bit at a time to help you – like, fractions of teaspoons amounts, especially if this is getting added to the surface of dryer lint.

Upside: This means a little jug goes a very long way. You won’t need much in each various kit, which makes it suitable for even tiny pill bottle or Altoids kits. It’s even less-expensive than grits, and even more resistant to damp surfaces while you’re making fires.

I cannot overstate the need to not have this blowing around dry grassy/leafy areas, your bag and tent, your hair if you use alcohol-containing products, or if the air is swirling and this might end up back in your face. Also, add fire to your creamer; do not be the many morons on YouTube who light fires and then pour the creamer on.

If you’re inclined to make those drinking straw kits, please be very conscientious of the fact that you use fire to melt the straw ends closed.

One skill absolutely worth mastering, that will save an enormous amount of time and effort in starting a fire – and reviving it if it falters – is a feather stick. By peeling up curls of wood, you create kindling and tinder with excellent “catchability” and oxygen flow. You can also benefit by exposing the inner wood, which can be much dryer than small kindling sources after days of rain or snow melt.

You can make them out of whole raw sticks and branches, batoned branches, split logs, or pieces of junk timber and dimensional lumber. They’re pretty easy. Just remember the general safety rule of cutting away from yourself. 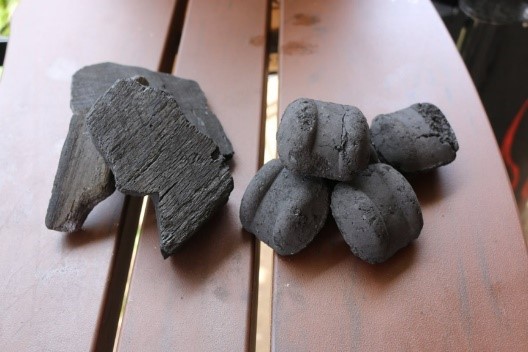 Keep 2-4 charcoal briquettes in your car kit, camping and kayaking kits, and your packs. Keep a tin of them handy for your rocket stove or fire pit. They weigh nearly nothing and they take up less space than those egg carton sections people love.

To use, stash one under your kindling with your tinder, inside your teepee or frame. You’ll need the tinder and kindling to get them going, but once you have, they generate a great deal of heat, and stay hot for a while.

Combined with a tin can, they can also help us carry fire from one location to another, or through part of a day. They can be used to help dry out kindling and smaller fuel wood, or to revive a fire without striking more sparks or matches. That’s especially useful if we’re out-out and we need that fire, when our hands are shaking (or mittened), in wet and windy conditions, and while we learn the nuances of banking a fire for the night. 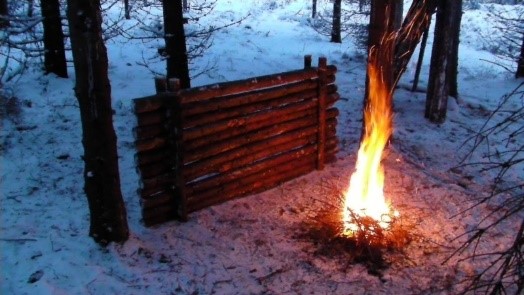 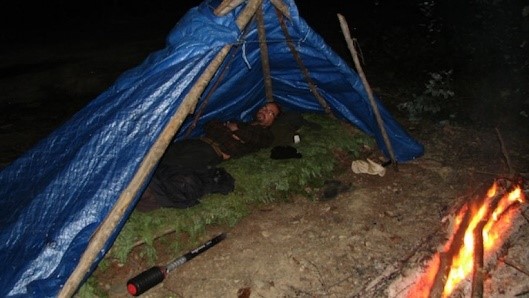 Getting a fire started can be a big advantage, but it’s really only the tip of the iceberg. How we build and feed that fire, where we position it, and what we combine it with impacts its effectiveness for heat, for cooking, and for signaling. Changes affect how long that fire will last, how much smoke it produces – and where that’s blowing – and how high the flames are reaching. In some situations, we’re also controlling how much light it gives off; looking for brightness, or limiting the visibility of the flames and-or the smoke.

Especially if we’re counting on fires when we take to the hills or for wilderness accidents, we need to know what is and isn’t actually going to work. So practice the whole process, dusk to dawn, not just sparking tinder.

A long time ago I saw a Canadian TV show on winter survival. The were making snow shelters, caves, trenches and under pine trees. One of the things that I saw was using a Sucrets tin with a tube of Vaseline and a bit of gauze from there first aid kit to make a “Betty Lamp” heater for the shelter. They worked the Vaseline in to the gauze. Than laded it into the Sucrets tin with a bit hanging out and filled the tin with the rest of the tube of Vaseline and lite the end of the gauze and… Read more »

My favorite Canadian DIY show was the Red Green Show. Now that man was a genius!