What Is the Best Bunker Design? 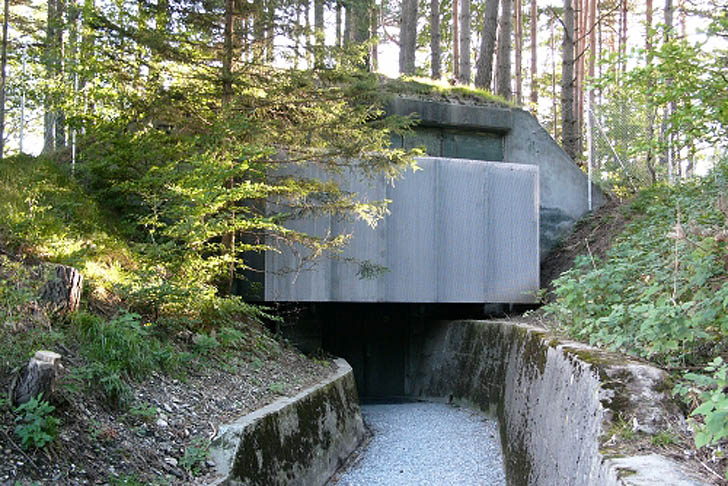 Editor’s Note: This article was generously contributed by Clarence Mason and in it he compares and contrasts two different survival bunker designs. Each have their advantages, but if you are considering building your own survival retreat option in the future, it makes sense to consider what is the best bunker design before you get too far down the planning road.

Many are written by Pat Henry, who I recently had the pleasure of having a conversation with. As a result of our conversation, I’ve decided to write this story, in the hope of inspiring people to educate and prepare themselves in dealing with disasters, man-made or natural, that require hardened protection.

I want to talk about what I believe to be the most critical necessity in the event the SHTF: The ability to shelter in place, in a shelter that provides protection from radiation, bombs, attacks, tornadoes and numerous other threats to safety.

While there are above ground shelters that do offer protection from some of the above mentioned threats, hands down, the best place to be is UNDERGROUND.

That said, with the exception of a line of Tornadoes passing through, you need to be psychologically and physically prepared to go underground for at least 2-3 weeks.

The amount of time will of course depend on the extent and type of event that has or is occurring.

Let’s assume you have a bunker and did your homework and have an adequate supply of MRE’s, water and other necessities for what could be your INITIAL 2-3 week stay.

What is the best bunker design?

I want to address the psychological aspect of being underground, in a confined space, and the issues/considerations faced by the occupants with regard to the Type, Shape and Utility of your surroundings.

Let’s face it, practical and usable space quickly becomes a valuable commodity when you are going to spend a significant amount of time in the shelter before venturing topside, and that environment should be comfortable, healthy and space efficient. You are going to be stressed enough if you are in there, and the last thing you need is the additional stress of a cramped, unfriendly environment.

I present this question for your consideration: Would you rather be in a claustrophobic steel pipe or in the open area provided by a square-shaped reinforced concrete bunker that is already finished with non-toxic material?

If steel pipes and steel boxes were the best shelter platform, the Military would be using them, and they’re not….they are still using reinforced concrete. There has to be something to be said about that, and there is Mass, Density, Thermal Resistance, Sound Attenuation, and Cost, to name a few.

Furthermore, steel shelters, which are typically 3/16- 1/4 of an inch thick, need to be buried DEEP, in order to provide the proper comparative level of protection against radiation. They are typically installed with 8-10 feet of earth covering the top and this presents a considerable number of challenges with regard to the costs for excavating, the need to hire a crane and other issues.

For example, a 10 foot Pipe that is 20 feet long will require an 18-20 feet deep hole and provides a gross interior area of 1,570 cubic feet. Keep in mind that the interior surface is curved ( similar to being in a submarine ), and therefore requires a floor to be installed, which reduces headroom. Simply put, a pipe doesn’t lend itself to being space efficient and comfortable.

Comparatively, a 10 foot tall, 10 foot wide and 20 foot long Concrete shelter will only require a 12-13 foot deep hole, provides a gross interior area of 2,000 cubic feet, does not require a floor to be installed, has no loss of headroom anywhere inside the structure and only needs to have 2-3 feet of earth cover overhead.

If the height of the Concrete shelter is decreased to 8 feet ( the same height of the ceilings in your home), the required depth of the hole is reduced to 10-11 feet and the gross interior area is 1,600 cubic feet. This is still more than a 10 foot pipe of the same length while also providing complete use of the space, as the side walls are not coming in toward the center as they do in a pipe.

In my opinion, the 2 feet of headroom throughout is more than adequate.

Having adequately addressed the space issue, I’d like to make a quick point on the use of ICF’s (Insulated Concrete Forms) for long-term underground shelters.

ICF’s are made of Expanded Polystyrene (EPS) foam blocks that are put together like Leggo’s, a double row of rebar is installed as the foam blocks are connected and when the walls are completed, concrete is pumped into them.

Of biggest concern with these systems is the fact that the Polystyrene contains toxic chemicals. Not only because they are made of petroleum-based foamed plastics, but also because they contain fire-retardant chemicals that are also toxic. Among these chemicals is HBCD (Hexabromocyclododecane).

HBCD has been classified as a category 2 for reproductive toxicity.[6] Since August 2010 Hexabromocyclododecanes are included in the EPA‘s List of Chemicals of Concern.[7] On May 2013 the Stockholm Convention on Persistent Organic Pollutants (POPs) decided to include HBCD in the Convention’s Annex A for elimination, with specific exemptions for expanded and extruded polystyrene in buildings needed to give countries time to phase-in safer substitutes. HBCD is listed for elimination, but with a specific exemption for expanded polystyrene (EPS) and extruded polystyrene (XPS) in buildings.

Additionally, EPS is labeled a flammable material and MUST be covered with a non-flammable material such as fire rated sheetrock or masonry to limit surface exposure to possible ignition sources. This covering also reduces exposure to the off-gassing of other chemicals considered to be toxic that occurs without exposure to fire.

When it burns, EPS produces heavy, acrid and toxic smoke. This obviously presents another serious problem when you are in a confined space, from which there is no escape. Even a small event in which this material merely smoldered with no open flame can/would have dire consequences for the occupants. Exposure to the heavy smoke generated, even if only for a few minutes, has been shown to be lethal.

In short, you are looking for your shelter to provide you a safe, healthy and fireproof refuge from a multitude of disaster scenarios. The dangerous and potentially lethal points made above should not be overlooked when making a decision in choosing a bunker or shelter.

About the author: Clarence Mason has 35 concurrent years of interdisciplinary experience and training in the public and private sectors of the fire service, law enforcement, and investigations. Along with his respected colleagues, Clarence has been an invited speaker/presenter on matters involving National and State Security, Disaster Planning/Management, and Risk Assessment. Clarence has extensive knowledge and experience in the building of commercial and residential concrete structures, and as a result of blending these unique experiences, is also the inventor of a patented system designed to provide the levels of protections needed in the building industry. You can learn more about the building products in this article at www.tempestbuildingsystems.com

Just remember arsenic is an accretion from many concrete mixtures.

I’d love to see some actual bunker designs. I understand the limitations of a pipe based bunker, and that a reinforced concrete based bunker is optimal, but what about the risks and alternatives to ‘connex’ based bunkers?

I can’t imagine not having an escape hatch in a bunker. One way in/out spells doom.

Mike, do NOT burry a “connex” do your research, they wont withstand the pressures without a LOT of reinforcement. Most true “bunkers” have more than one exit.
NRP

Not advocating the connex solution. Where there is an amateur engineer, there is always a work around to the lateral weakness of the construction. A connex provides a degree of additional opsec that a construction crew and multiple cement trucks lack.

Not sure the steel is corrosion resistant enough. Maybe if you could seal it with Linex in addition to a lot of reinforcing and insulating then it MAY be worth the effort. Just my humble opinion.

The metal pipe would give you extra EMP protection

In my tours in Afghanistan we used a lot of “connex”/shipping containers for bunkers. Keep in mind that this was AFTER we hardened them with additional steel “I” beams and a lot of extra welding and they were placed above ground surrounded by HESCO barriers and covered on top with about 3 feet of sand bags. The ceiling would bow inward from the weight even in spite of the reinforcement and the bunkers that had been there for several years would leak and the ceiling and walls were warped pretty badly. They worked great for incoming rocket fire and mortars… Read more »

The only would I could *maybe* see it work is if it was a complex of bunkers, each watching the other’s oxygen intake and security door and being able to defend with crossfire. Otherwise it’s a deathtrap as soon as it’s discovered. Even traps and explosives on the outside would eventually run out…

What about using precast concrete box culverts? I’ve just start researching them but they appear to be a good alternative.

Ed, I was thinking about the box culverts as I reasd the article. As a Civil Engineer, I have used them in numerous applications as a cost effetive alternative to poured in place concrete. I would expect a bunker design would be an easy adaptation of the typical box culvert instalation. The ends can be precast solid or with openings for addition of steel or aluminum doors. Openings can also be cast in the sides or tops for hatch or vent installation with some size limitations. 12′ x 12′ x 4′ running length is as big as you can truck… Read more »

Used a lot on large bases in Iraq and Afghanistan for rocket protection. Add a quality concert floor and you may be onto something.

I would like to buy a refurbished nuke silo, and just turn it into cushy underground home.

All good questions and points. Shipping containers are definitely not a good option. They are typically made of 16 and 14 gauge corrugated steel (.065 and.075 inches respectively) and the amount of retrofitted fortification that would be required to withstand the weight/pressure of several feet of earth is considerable. The container would have to be buried fairly deep(as most steel shelters are) since it offers little protection, in and of itself, against radiation, heat or even small arms fire due to it’s light construction. Then of course there would be waterproofing required(although they are made to be exposed to weather,they… Read more »

This was an informative article, but I would like to see a bunker industry comparison of bunkers. Perhaps this has been done, but I just haven’t run across it yet. If anyone knows of any credible and objective comparisons, I’d be interested in knowing the link to that info. Right now, I’m considering Rising S, Vivos, or Bombardo. I don’t need an underground city, nor do I like communal life (been there, done that in military). I just want a functional bunker for 4 to 6 people that is reasonably priced and will last for a long time.

Correction to my previous post: Bomb Nado, not Bombardo.

A bunker would either have its entrance broken into, or the doors welded shut from the outside trapping whoever is inside to die. The oxygen supply could be cut off and so on… I’ve seen people spend $50 to $200 thousand on their coffins and it’s not funny.

Hi guys I’m a new prepper got any advice? Also on YouTube at BilliamTanker007 thanks!

Purchase The Prepper Journal Archive, find a comfortable spot and do some serious reading.