This week Rep. Mike Honda, D-San Jose announced legislation that would block civilians from purchasing “military-grade” body armor. Blocking this access will keep people safer he says and will prevent criminals from using this armor in battles with law enforcement.

Honda said. “It would ensure that only law enforcement, firefighters and other first responders would be able to access enhanced body armor.”

“We’re not talking about just a standard bullet-proof vest,” he said. “We’re talking about body armor that is designed for warfare, designed to protect against law enforcement ammunitions.”

Honda said shootings by armored assailants are becoming a trend in recent years and said that according to experts, “access to military-grade body armor emboldens criminals and mass shooters to act.”

Should law enforcement have better gear than civilians?

The question of whether or not our law enforcement officials should be able to purchase more lethal gear than civilians is one that has been debated on the prepper journal before but it bears revisiting. At the core of the issue is the assumption that if someone is wearing a badge, they deserve to be able to kill you more easily or quickly than you can kill them. Is that right? Police officers already have bullet proof vests, guns and the authority to shoot to kill if the situation warrants it. This is another attempt to disarm citizens and make you less able to defend or protect yourself from aggression. It doesn’t matter if this aggression is coming from a criminal or a law enforcement officer; you still have the right to try and protect your life.

But what about the crazy killers you say? They don’t need any help shooting people and we should do anything we can to make sure police can take a lone nut out as quickly as possible, right? This doesn’t have anything to do with reducing the amount of wackos out there and no law created has ever stopped a criminal from breaking the law. Laws do not stop someone who is crazy from being crazy. You can make guns illegal, but criminals still have them. Take away every “dangerous” weapon in the world and someone can still bash your brains in with a rock.

Laws that reduce the ability for law abiding people to defend themselves never affect the criminals; they only hurt the people who obey the laws.

Why is this stupid?

Rep Honda goes on to state:

“There’s nothing more dangerous than an unstoppable, well-armored shooter,” he said. “The law enforcement community sees an increase in use of body armor in violent, gun-related crimes.”

The congressman cited a shooting on July 22 in Riverside County, where a man wearing body armor and armed with an assault rifle shot and killed two sheriff’s deputies and wounded another.

“We should be asking ourselves, why is this armor available to just anyone, if it was designed to be used only by our solders to take to war?” Honda said.

If you are a police officer, I commend you choosing the profession you have. It is an honorable goal to serve and protect the citizens in your local area. However, your safety doesn’t trump my safety. If you get to roll around wearing bulletproof armor, I should too if I want. Just because you have a job to enforce the laws that doesn’t mean I lose my rights in order to keep you safer. If you are too scared to perform your job because of all the bad guys with guns and bulletproof vests, find a new line of work. If a criminal decides they want to shoot you, your bullet proof vest should save you, provided you get shot in the vest. If you shoot me, my bulletproof vest will do the same. 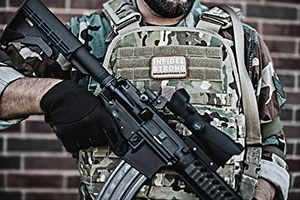 I have my own Body Armor from Infidel.

There is only one reason to disarm people or take away their ability to defend themselves and that is to manage them more easily – make them less likely to challenge your authority. We as a country have more laws now under the guise of preventing violence than any time in our history and yet no one is any safer than at any other time in history. In fact, the areas with the strictest gun laws have the most violent crime. Look at the city of Chicago for instance where it is almost impossible to have a gun there but still there have already been 226 murders so far this year.

And it isn’t only the criminals we have to worry about; it is the police officers themselves. There are new cases of police abuse daily it seems with police officers choking people to death, body slamming women for crossing the street, or beating the crap out of an older woman walking down the freeway. Who is in more dangerous here? I wrote not too long ago and posed the question ‘Would society be better off without police?’ because there are so many incidents of police violence that it seems the motto that used to be ‘serve and protect’ should more accurately be ‘dominate and destroy’. Now they want to do something else to make themselves more powerful than citizens. You have to ask why.

The solution to any problem dealing with criminals needs to focus on the criminal, not honest people. By infringing upon our right to self-defense you make us an easier target for criminal activity. You do not ensure your safety, you remove ours.

I have a bulletproof vest from Infidel Body Armor. Will that make me bulletproof and unstoppable? Hardly, but it will keep me safer when bullets start flying regardless of who is doing the shooting. I think the Representative needs to look at the total number of incidents where police have been the aggressors. When police who really are “dangerous”, “well-armed shooters” are running around abusing their power, we have bigger problems as a society. Just recently two married police officers shot and killed their daughter’s boyfriend in cold blood. You talk about ‘There’s nothing more dangerous than an unstoppable, well-armored shooter.’ and I say that describes police officers pretty accurately.

I am starting to wonder who the real criminals are.

Remember in 2013 when that Christopher Dorner guy was running around killing police and the LAPD and Torrance PD shot at three different people in two incidents out of panic because the trucks they were driving “matched the description” of the suspect vehicle when in reality they did not nor was the suspect anywhere near the location? Fortunately no one was killed, but the police didn’t even bother to verify or give orders when they had the jump on the situation. Then we have the cop from New Jersey, Richard Recine, who just this week said that if Obama doesn’t… Read more »

I do remember that, but someone was killed by police in this case as well. They burned the cabin down with Dorner in it didn’t they?

In the video of the ordeal, it showed Dorner trying to give himself up and they shot at him until he ran back inside onto his inevitable death.

Websites listing number of police officers killed while on duty: http://www.nleomf.org/facts/officer-fatalities-data/officer-fatality-data.html and http://www.odmp.org/search/year and http://en.wikipedia.org/wiki/List_of_American_police_officers_killed_in_the_line_of_duty

You think one of those geardo cops is going to give chase to anyone or even be able to maneuver decisively on a perp through an extended urban scenario? Probably be on a knee sucking wind through their cool guy masks in about 15 mins. I love the dude who is sporting the trigger finger cut off (glove). Man that’s f-ing operator!

Anyways I agree with the article, we too should be able to own body armor. We should also be able to own aircraft carriers (and all associated fighter jets), tanks and the Death Star.

The law says I have the right to self defense, it does not say how! If the police need armour for their defense then so do I. They are not any more important then me. They don’t defend me, it’s my job.

The Rifleman Next Door

they can have my body armor when they get it from my cold dead hands….

In a free society, the question should be “Why shouldn’t a citizen have this?” There is no argument worth mentioning that should bar me from owning body armor should I feel the need.

Even if Michael Brown was “in a scuffle” it wouldn’t be a justifiable shooting because the shooting happened as Brown was trying to get away from Wilson. Prior crimes are not justification for shooting at people who are no longer a threat.

What you describe seems to contradict the story from multiple sources of how Mr. Brown was running back toward the officer. Also, all his bullet wounds are on the front of his body so are you saying he was walking backwards?

Actually, it seems you’re getting the bogus stories. There are not multiple sources saying Brown was running back toward the officer. Even if he was, which there are not multiple sources claiming, it does not justify Wilson’s shooting at Brown while Brown was trying to flee. Every witness that has given a full accounting of the story to the media agrees that Brown tried to get away from Wilson and/or threw his hands up in surrender right before he was executed. Firing at someone from behind doesn’t mean hitting them, although the shot to the arm could have come from… Read more »

Strange how we talk about something and *poof* it happens.

Police shoot “unarmed teen” (who knows if justifiable or not, supposedly was in a scuffle inside police car) and the militant urban youths go to rioting.

This followed the shooting of Ohio man John Crawford who may or may not have been brandishing a toy rifle inside a Walmart (http://www.infowars.com/walmart-shopper-killed-by-cops-after-picking-up-bb-gun/) Note: the article is particularly zealous in its anti-police bent, even for Alex Jones’s website.

These are interesting statistics:

I’m an LEO. I wear body armor every shift for obvious reasons. I also have a secondary external vest with level 4 rifle plates and soft armor, along with rifle mags and several other items in molle pouches. The second vest addresses an active shooter scenario where the assailant is armed with a weapon my soft armor only vest won’t protect me against. I can throw it on in about 30 seconds, and takes the place of the soft armor external carrier. I am willing to die at work, but I’d rather not if I can avoid it! At home,… Read more »

Great points and thanks for sharing Kingscott777!