The Complete Guide to Batoning 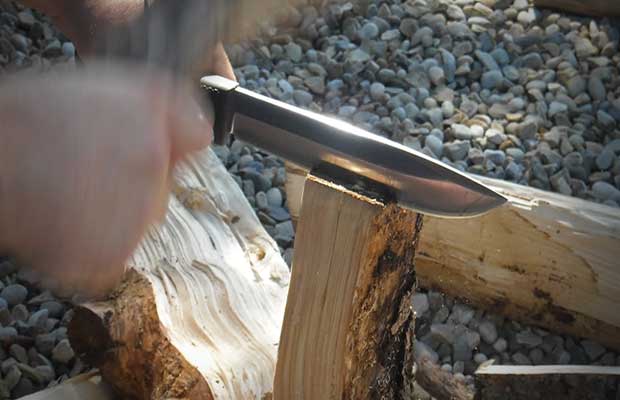 This article acts as a comprehensive guide to batoning. Be sure to pay close attention to the last two sections (the one on proper batoning technique, and the one on troubleshooting the difficulties of batoning), as these two sections will help you most out in the field.

Batoning is a survival and bushcraft technique whereby a sturdy knife is lodged in a piece of wood then struck repeatedly by a baton-like object, a heavy piece of wood for instance, in order to split the wood.

Among other purposes, batoning is often used to split logs and other wood to create kindling, to create access to the dry inner portion of a wet log for generating dry tinder, and to produce shingles, slats, or boards.

In many instances, batoning makes the process of splitting wood far easier than it’s alternative, chopping wood. Batoning requires less effort, takes less time, and results in a much cleaner cut than chopping. Batoning also requires much less experience to master than chopping, as aiming while chopping may be difficult to do at first. Batoning is an extremely handy technique to know when you do not have a chopper lying around, as may be the case if you’ve forgotten to take a chopper camping, for instance.

Why Knives Break When Batoning

In most cases, knives break when batoning because they are being batoned at an angle. If they are placed and batoned straight, the knife is far less likely to break. Batoning with the wrong baton (like a rock or brick for instance) will obviously also cause damage to the knife, which is why wood should really be the only thing used as a baton when batoning. If proper batoning technique is used, however, this can all be avoided, or at least mitigated dramatically. 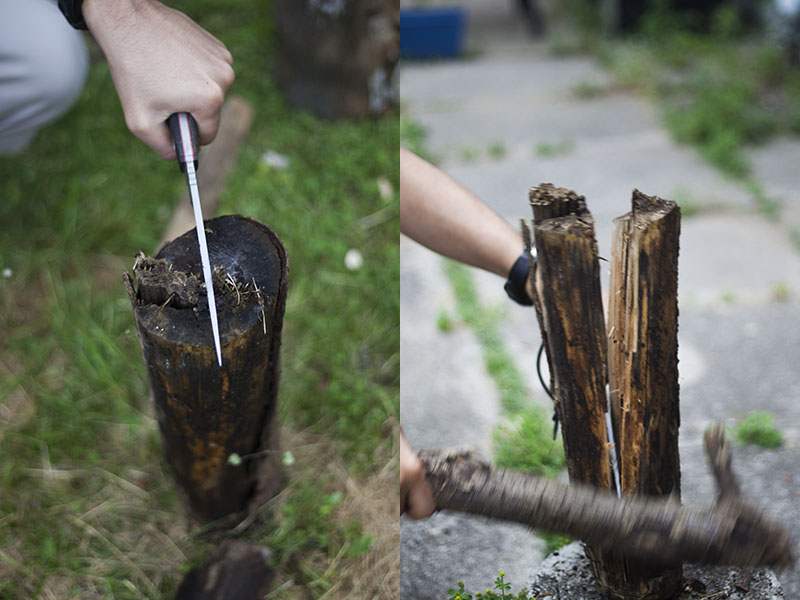 A piece of wood is the best tool to use for a baton. Rocks, bricks, and other extremely hard objects will work, but they will severely damage the spine of the knife you are using to baton. The best piece of wood to use is a piece of hardwood. If you would like to make a more comfortable batoning tool, say if you’re going to be batoning a lot of wood, shape your piece of wood to look something like a short baseball bat: debark it, and thin out a handle, then shave it down until it is smooth to the grip. The goal is to make a batoning tool with a wider hitting surface, and a thinner handle surface.

Batoning can be done with nearly any fixed blade knife, so long as the blade is strong enough to be able to stand repeated batoning. Knives with full tangs (where the metal from the knife extends past the blade and through the entire handle) are stronger and because of that will work better for batoning, as they are less likely to be damaged or break. The size of the ideal batoning knife depends on the width of the piece of wood you are attempting to go through. The edge of the blade of the batoning knife should be approximately 2-3 inches longer than the diameter of the wood you are trying to baton. That being said, if you’re looking for a single versatile batoning knife to use, you may want to stick to a longer blade. It is obviously possible to baton smaller pieces of wood with a longer blade, although it might be a bit tricky, but you will not be able to baton thicker pieces of wood with a shorter blade. The thickness of the knife’s blade doesn’t make much of a difference in batoning, only the length of the blade matters. 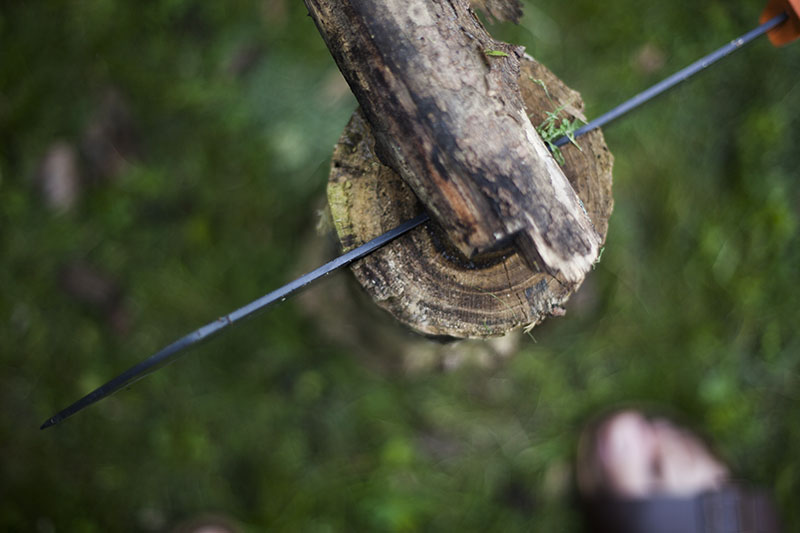 When batoning, there are many ways to mitigate damage and potential breakage to your knife. Use these guidelines to attain proper batoning technique:

Center the knife in the middle of the piece of wood you are trying to split.

Place the knife straight down, and not at an angle, when getting ready to baton (this is very important to mitigate damage or breakage to the knife). Hit the center of the knife with the baton until the knife is properly lodged in the wood, then proceed to the next step.

Baton on the blade end of the knife, but do not hit the very tip of the blade when batoning, as the tip of the knife is usually relatively weak and susceptible to breakage. The metal of the knife should protrude from the wood far enough so that you can hit, not the tip, but a part of the spine that is strong enough to take the batoning.

Readjust the knife, correcting the blade orientation by making the knife straight again, if it happens to shift to an angle after having been batoned for some time. Make gentle, corrective taps to the handle end of the knife when batoning whenever the blade begins to stray from it’s original downward alignment. Do not hit the handle as hard as you would hit the blade end of the knife, as the force may cause the knife to break or be damaged, but feel free to make light hits to the handle end when you feel it is appropriate.

Other than using proper batoning technique, the following is a list of adjustments you can make to have an easier time batoning. Try using one or more than one if a particular piece of wood is giving you a hard time.

Baton with the grain of the wood, not against it.

If possible, baton around and not through knots in the wood, as knots create sometimes extreme resistance and can, in certain situations, damage the edge of the knife.

If the log already has a crack, take advantage of it, as mother nature has already done most of the work for you. Align the knife on top of the crack and go through as you would normally.

Move the piece of wood you are trying to baton to rest on the hardest surface you can find. Ideal surfaces include large rocks, a second log, or, in more urban settings, concrete.

Use a more appropriate knife (see the Ideal Batoning Knife section above).

If you simply cannot baton through a particular piece of wood, try batoning a smaller one (in terms of it’s diameter or radus), as batoning becomes easier with thinner pieces of wood.

Hardwood is of course much more difficult to baton through than softwood (like balsa). Adjust expectations accordingly in terms of expansion of energy, and if it doesn’t matter whether you have hardwood or softwood, switch to batoning a softwood instead.

Just because you re-post an entire article and then publish a link at the bottom, without the author’s permission, doesn’t make it right. Doesn’t keep it from being theft either. I happen to know that Elise (the real author) did not give permission for you to publish this here. Do the right thing: take it down and publish a public apology instead.