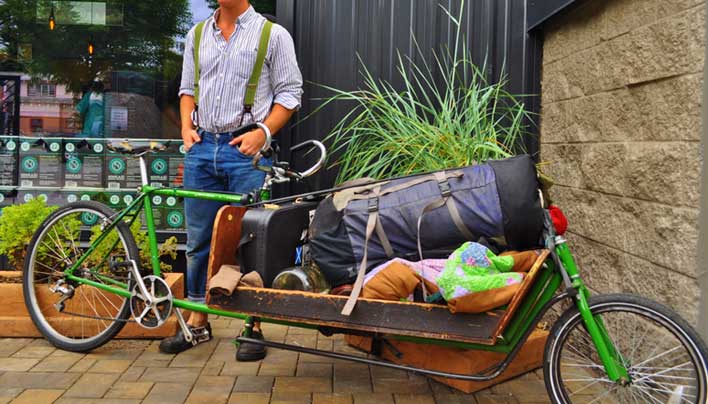 People-Powered Machines in Vietnam and the Ozarks

For years, I have stated vigorously that my feet will never leave Ozarks soil again, but you know what they say about never saying never.

I recently traveled with a marketing group to Southeast Asia, which gave me an opportunity to learn a bit about the culture, water issues and people-powered tools still in use. First, I had to get past the motorbikes.

As soon as we left the airport headed for Ho Chi Minh City, the cartoonish beeps of “motos” came at us from every direction. It was nearly midnight, yet we were in the midst of a confused concerto of mechanized tootles and honks that never ceases – and, from what I could grasp, carries on for no particular reason. 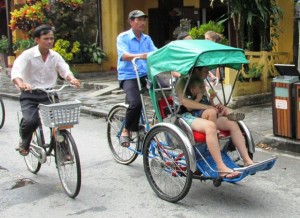 I later learned there are 20 million motorbikes in Vietnam. Drivers must be at least 18 years old to be licensed and must wear a helmet, but it seems that’s where the laws end. I watched as motorbikes buzzed down sidewalks, where, incidentally, much other commerce and mingling, including sweeping, sleeping, chicken-plucking, noodle-eating, game-playing and bike-fixing, takes place.

Woven wicker baby carriers hold the tiniest passengers atop the gas tank, while youngsters generally sit or sometimes stand on the seat between their parents or siblings. The largest human load I personally saw was a family of four zipping through town, but heard stories of a family of five on a motorbike.

With small engines (up to 400cc), motorbikes are considered the most economical and multipurpose form of transportation for many in Vietnam. They even have “moto” taxis. We saw some mind-blowing things hauled on motorbikes – computers, furniture, caged chickens, framed paintings and bales of coconuts that nearly hid the driver.

Our interpreter explained the motorbike craze erupted in the last 20 or so years. Along with the incessant noise and chaos, air pollution is also now a serious problem. Many riders, pedestrians and street workers wear dust masks (usually with brightly colored designs or cute slogans) to prevent breathing the toxic fumes. In some parts of China, motorbikes have already been banned because of pollution. 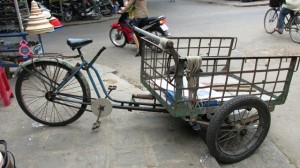 I was pleased to see bicycles and other human-powered devices still plentiful in Vietnam. The iconic rickshaws are generally used now to cart international tourists about, although large tricycles with industrial-sized carts on the front still haul tools, market goods and heaping piles of fresh produce. I admired the cyclists’ agility and wondered how many of us could pilot such massive loads.

On the rivers, another pedal-powered vessel attracted my attention. The long, wooden boats appeared like any other until I saw the operators row casually by – with their feet. Unlike chunky plastic paddleboats found at water parks, these sleek craft are built for fishing and graceful passage – low to the water, quiet and non-polluting.

Out on the sidewalk in Hoi An old town market, I watched a barefoot man stitching sandals with a treadle sewing machine. I don’t know if he brings his sewing machine outside to entice customers to his shop or simply because it is less hot out there. I stood and admired his workspace and craftsmanship until my traveling companions pulled me away. 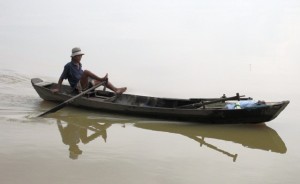 Still popular, too, are the wooden or bamboo carrying poles with baskets hanging from both ends. The weight and bulk carried by petite women much older than I am was astonishing.

I marveled at the amount of walking and other physical activity going on around me. Vietnam seems to be a nation that promotes fitness, as all sorts of free exercise equipment and group aerobic and yoga classes are in the beautiful, numerous city parks. Before the sun is even shining, long lines of men and women of all ages are flexing, stretching and jumping to start the day.

I returned from Vietnam with plenty of photos and ideas for human-powered tools. I know just the guy who can build them for me. And, I swear, I am never leaving Missouri again.

Pretty! This has been an extremely wonderful post.
Thank you for supplying this info.