Could The Boston Marathon Bombings Be Another Excuse To Steal Our Freedom? 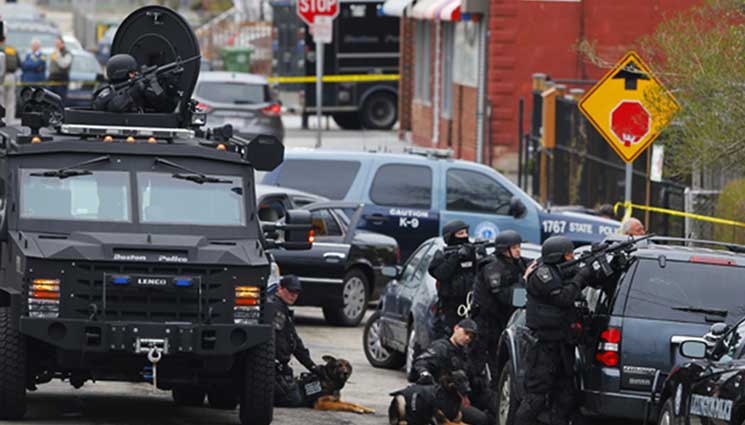 I have not been following the news of the Boston Marathon bombing tragedy hyper closely because I didn’t want to get bogged down in the details. That may sound foolish or naïve, but I had a feeling as this was unraveling that something seemed very odd about the events portrayed in the news and TV. I continue to feel that way after the two suspects have now died or been captured.

Time or circumstances has made me a little more skeptical to believe everything I see on TV at first blush. I don’t know whether or not this is a good thing but I started to wonder how we as a society will change going forward.

After every terror attack since 9/11 we have lost some of our liberties in the name of fighting terrorism and I don’t expect this event to be any different.  I still believe that the Boston Marathon bombing event will be more significant for how society will change as a result than the actual event that took the lives of 3 people and injured over 100 others. In consideration of that belief, I started to think about the precedents that have been set in the wake of this tragedy and how they might change our world tomorrow now that the dust appears to be settling.

As soon as the “authorities” were on the trail of the suspects, they ordered everyone off the streets and into their homes. People willingly hid in their homes to stay away from the boogie man who was running around with a bomb apparently.  Several communities were under Martial law as armored vehicles, Humvees and troops combed their streets in full battle gear.

Was all this necessary? In retrospect, was this conditioning for getting us used to hide in our homes while the military roams the streets? Why were all of these troops necessary to catch 2 men? Aren’t the Boston police capable of catching someone when the entire world knows who they are and what they look like?

Immediately after the bombing, a no-fly zone was declared with a 3.5-mile radius over 811 Boylston Street. The zone was later reduced in a subsequent notice to a 2.3-mile radius. The zone is limited to flights under 3,000 feet in altitude, which is lower than most airliners would fly except when taking off or landing.

The only people who would have been able to fly that low are helicopters and small planes. Why this restriction? Perhaps it was for public safety but maybe it was to keep someone in the sky from seeing something on the ground that the media wasn’t showing.

Door to door searches without a warrant

Police were hunting for a suspect door to door in several neighborhoods in Boston so they were going from each home, one by one, searching homes and cars with complete impunity. I heard reports that some people, scared that the bombing suspects might actually be in their home were welcoming the police in with open arms. Why doesn’t this seem odd to anyone? On another level, could this additionally be conditioning or practice for gun confiscations?

A Justice Department official says the Boston Marathon bombing suspect will not be read his Miranda rights because the government is invoking a public safety exception.

That official and a second person briefed on the investigation says 19-year-old Dzhokhar Tsarnaev will be questioned by a special interrogation team for high-value suspects. The officials spoke on the condition of anonymity because they weren’t authorized to disclose the information publicly.

This just means they can torture anyone they want in the name of “public safety”. Again, a precedent is being set here that is really dangerous. Why, when he is in custody does this person still present a public safety threat? What is a definition of public safety? Can someone who is just really pissed off be a threat to public safety so we don’t need to Mirandize him anymore? This seems to give too much power to law enforcement when they can arbitrarily throw our legal rights out of the window whenever they declare a “public safety” threat.

Who stands to gain from this tragedy?

That seems like a horrible question to ask, doesn’t it? If you believe in the problem-solution paradigm, then you could easily see how this event would allow some in power to push for more limitations on our freedom. If the solution is that you need a way to have more TSA agents on the streets, we need a threat (problem) to warrant their presence.

Voila! Everyone in the US could now be a part of a new threat of Islamic terrorism. Do you want to be able to search anyone’s home and have them gladly let you in? Lockdown the city because of a lone crazy person on the loose. Do we need to control access to the media? Lock them out of a big section of the city and close the air space! This is too easy.

I know some of you will say that I am not looking at this the right way. There were dangerous men on the loose and we had to find them before they blew up something else or hurt another person. I disagree. When have we ever been free of bad people? When have we ever been completely safe in any situation in our lives?

Giving up our freedoms and liberty is not a fair trade for the illusion of safety. My fear is that this tragedy is going to be the springboard for another round of calls for just that, another erosion of our freedoms. I hope I am wrong, but I got money that says I’m not.

As I understand it, the reason for the invocation of the exception to Miranda is the potential for immediate threat that may exist in the event that they are/were not working alone. A search of the apartment the brothers shared turned up an “arsenal” of arms, explosives and IEDs. Obvious evidence that subsequent attacks were planned. The span of time allowed by the exemption is limited, by law, and the suspect will still receive his right to due process. The brothers appear to have both been unemployed, yet managed to assemble an extensive cache of weapons and bomb making materials,… Read more »

Thank you for your always thoughtful comments Larry. I do hope you are right but, we have and continue to see a chipping away of our liberties and no reason, to me at least, is good enough to excuse this. Even if there are extenuating circumstances, we shouldn’t throw out the protections we all as individuals should have. Now, put the shoe on the other foot. If someone in my family, God forbid was injured would I feel the same way? I would like to think so. The end goal in a situation like this should be justice. As long… Read more »

Believe me when I say I completely understand your point of view. I hold many of the same views, although perhaps to a lesser extent. The problem seems to me to be that any steps taken for security are by their very nature a dual-edged sword. Whether governmental security policy choices will preserve liberty or infringe upon it depends almost entirely on the individual(s) in charge. I believe GW was basically a good man who made some bad decisions in the name of security that have become avenues for Progressives of both parties to use in their bid to further… Read more »

We have already lost some of our freedoms through the events in Boston. After every event Lesson’s Learned are mandatory from agencies involved. Through these lessons learned Standard Operating Procedures are adopted. So henceforth we will see the exact same scenario played out of locking down neighborhoods and door to door searches. It doesn’t not matter that it really didn’t work and if I heard right, the suspect was located outside the lockdown area. It was a civilian who located the suspect.

That’s right. The police didn’t catch him at all, an guy who went out for a smoke break found him…

It’s now being reported that people were forced out of their homes at gun point by officers and had to exit with the hands in the air. That doesn’t sound safe or constitutional to me at all.