Are You An Inflatable Prepper? 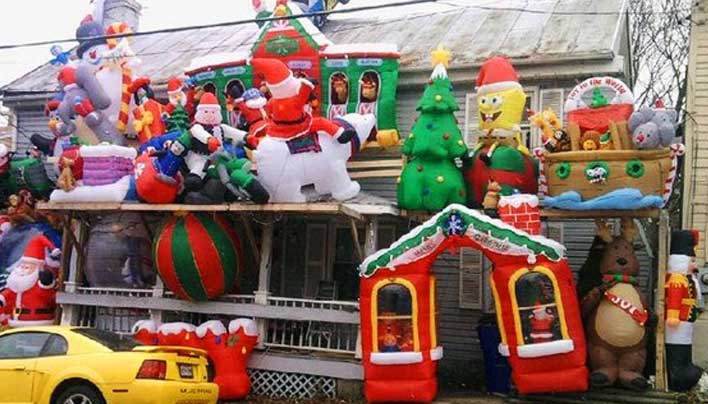 Every weekend, I drive with one of my children to run errands and my route takes me past the same house (not the house in the picture above). I know it is coming before I get there and try as I might, I can’t stop myself from glancing out my window, over my daughters head to the yard of this house. The house is a nice enough house in a nice enough neighborhood, so what I see each week surprises me. On their roof, lying pitiful and sorry-looking is one of those inflatable Santa’s complete with the sleigh and reindeer. It is now the middle of April.

One could argue that it could be worse. At least it isn’t still inflated, flapping away up there on the person’s roof, waving to every car that passes by on this beautiful spring day. While I can agree with that,  I find it really odd that they had enough motivation to climb up on the roof in the first place, mount the inflatable Santa so securely that it lasts almost 5 months without blowing down and yet they haven’t removed it now that the season is well over. It is possible that something happened and the person may not be able to take the Santa down, but it made me start thinking about the traits that some of us can have from time to time as Preppers when faced with new threats, challenges and general apathy in the face of life and everything it can throw at you.

The concept of an inflatable prepper hit me as an accurate metaphor to describe how some of us in the Prepper movement react to prepping in the face of news like the bombing in Boston and the bad hands that life deals us all from time to time.

Looks great on the surface but inside, it’s just hot air

There is a tendency in the Prepper movement to focus on gear. I am not above anyone else in this regard because I do believe that gear and tools are necessary and I have written several posts about gear that you need to have. Gear is relatively easy to purchase and is one of the easiest ways to start to prepare yourself. Is training better than gear? I think so in some cases where gear doesn’t matter. For instance, it is better to know CPR than to have one of those bellows devices if someone isn’t breathing.  The skill to save a life in this instance doesn’t require tools. Gardening is a similar comparison. You need the skill of gardening more than you need a shovel and a rake.

But in the absence of training, can tools help? I believe they can. Stick a survivalist on a deserted island with nothing and see how he does. Then stick a complete novice on the same deserted island with a multi-tool, some food, waterproof matches and a life raft and see how he or she does. I personally like to have some tools because I believe that with the right motivation and mind-set they are going to help you, regardless of your training.

What I am referring to though is the Prepper that only purchases the tools, doesn’t care about training and doesn’t have the right mind-set for what could be coming down the road. They look great with all of their supplies, but don’t seem to have what you will need on the inside to persevere when the chips are down. You simply can’t buy a few firearms and expect that is all you need. Likewise with food; your 30 day supply of food is great, but what if you don’t have a clue as to how to prepare it and wouldn’t be caught dead eating it if you were starving? Having that survival seed bank is excellent, but if you think you are going to walk outside after the SHTF, dig up your yard and eat like a king, you probably won’t.

There is so much to being a prepper, but I believe that it all starts with a desire to take care of yourself and your family in the case of any disaster as much as possible. There is a simple idea of not wanting to rely on someone to help you. That is usually a motivation based on love and self-reliance. The common trait about these people I think is that they would be the first to come help you if you needed it. If all you are living for is the grid to go down so you can kill zombies or steal your neighbors corvette and drive to Vegas, you might have some surprises ahead.

Put away until the next time there is a need

Prepping is not a sprint, it is a marathon. The skills, tools, experience and knowledge you gain shouldn’t stop with the last tragedy that is broadcast on the news. Just because Sandy Hook is months away doesn’t mean you should stop being vigilant. If you are truly concerned about your family’s safety, this has to become a lifestyle.

Now, when I say lifestyle, I am not suggesting that the only way to be a “true” prepper if there is such a thing is to live on a compound in the middle of the forest and survive purely on game that you are able to catch with a snare made of your own armpit hair. No, quite the contrary. Regular people are just as valid preppers as any guy who can catch Salmon with his bare hands and eat it raw. The trick is to stay in the game and look at the lifestyle of Prepping as just that. Something you do because it is who you are, not what is happening on the news.

Quick and Easy as long as there is power


The inflatable Santa on that person’s roof is limp and lifeless because the blower motor that powers them hasn’t been turned on. Some of us in the prepper movement need a crisis or else we quickly fall back into relaxed mode, get deflated and seem pretty lifeless. Everything is fine in the world until some tragic event like the bombings in Boston two days ago crystallize the moment and cause preppers to perk up again.

Don’t get discouraged by whatever events are going on in the world. For me, I have friends who ask me what the next year or months hold. I  will be quick to admit that I don’t honestly know, but I have some thoughts about potential scenarios based upon current events and historical precedent. Even scarier is that I don’t know how bad our society will get before it’s over. My personal belief is that we haven’t seen anything yet, but I am planning to survive if I can no matter what happens. I fully anticipate horrific events as a possibility, but I am not going to let that detract me from what I feel I have to do.

I really hope and pray that we will be spared any tragedy in my lifetime, my children’s lifetimes and for the rest of eternity, but that isn’t realistic. So I try to have the mind-set that I am in this for the long haul, regardless of what is in the news.

So true! Great way of putting it! I definitely know lots of “inflatable preppers”!

Thank you very much!