Could there be a way to practice combat without risking death? Today I will discuss how you can up your end-of-the-world game and have fun at the same time.

There are two sides to most of the more opinionated comments and occasionally articles I read out in the prepper blogging world with respect to any hypothetical grid-down scenario. The first side (let’s call them the “Experts”) goes usually something like “if you don’t have any real-world experience, you will die if the SHTF”.

The second is more optimistic, to put it mildly, and goes something like “When it goes down I will kill anyone who gets in my way with my bare hands” (we’ll call them the “Commandos”).  I can appreciate both opinions and viewpoints, but I think the reality for the majority of the rest of us lies somewhere in the middle.

The “Experts” side does have a point. In any type of disaster situation, the most prepared usually have the best odds at survival. If you have been in life-threatening disasters, combat or wilderness environments where you had to make it through some event solely on your wits and skill alone, you are doubly prepared. Having experience surviving or being self-sufficient is a huge advantage so those people would seem to have the upper hand. If Bear Grylls is a direct relative, skip ahead 3 spaces.

The “Commandos” side also has a point because I know of countless times in history that ruthlessness and aggression make up for brains, skill and luck far too often. The saying is that “Fortune favors the bold” and sheer willpower can overcome all sorts of obstacles. Not giving up for a second, even if all manner of logic dictate that you should, has won battles time and time again, so we can’t rule them out either.

As I said, if we do go through some form of collapse of society, I think there will be people from the “Experts” side as well as the “Commandos” side who are able to survive and perhaps thrive. What about everyone in between? What if you don’t have any survival skills, military experience or sheer “I’ll rip your face off and eat it” psycho mentality?

How can you prepare yourself without joining the Marines or some bizarre street gang called the Fuzzy navels? What if you are just beginning to prepare when it all goes South? Does that mean we should cash in our chips, throw in the towel and go home? Of course not. How can the average everyday person get some decent combat training and experience without signing their life away to Uncle Sam or breaking any laws?

Yes, I said it and before you throw your mouse at the screen, I ask that you hear me out. I am fully aware that Paintball is not a realistic combat scenario from the truest sense of the word; however, you can learn skills that will help you in a combat situation. It is easy for the novice to join in and fun for people of all ages. So how can Paintball teach you combat skills you ask?

Paintball allows you to learn strategy

Combat is won and lost on strategy and thinking tactically. In order to outwit your opponent, you have to analyze all sorts of variables. What is your terrain like? Where do you need to travel to and how will you best get there without exposing yourself. Where will your enemy be and how will they most likely attack?

Paintball allows you to practice these strategies without getting hurt unless you try to act like Rambo.

Many paintball teams play without any uniform, but some are geared up just like the military and take advantage of camouflage to avoid detection and hide their movements. Learning how to use your foliage and shading with face paint, the natural surroundings to your advantage can help with a potential future where you may have to hide or evade detection.

Paintball also teaches the concepts of Cover and Concealment. The difference between the two is less harsh with paintball, but the theory is still the same. Cover refers to structures that will prevent a bullet from hitting you. Examples of cover are foxholes where you can drop below the surface where the rounds are flying, concrete walls, cars, etc. Concealment won’t necessarily protect you from any rounds but may hide your shape. Examples of Concealment are large bushes or high grass. You can get lost in there, but a bullet will still hit you. 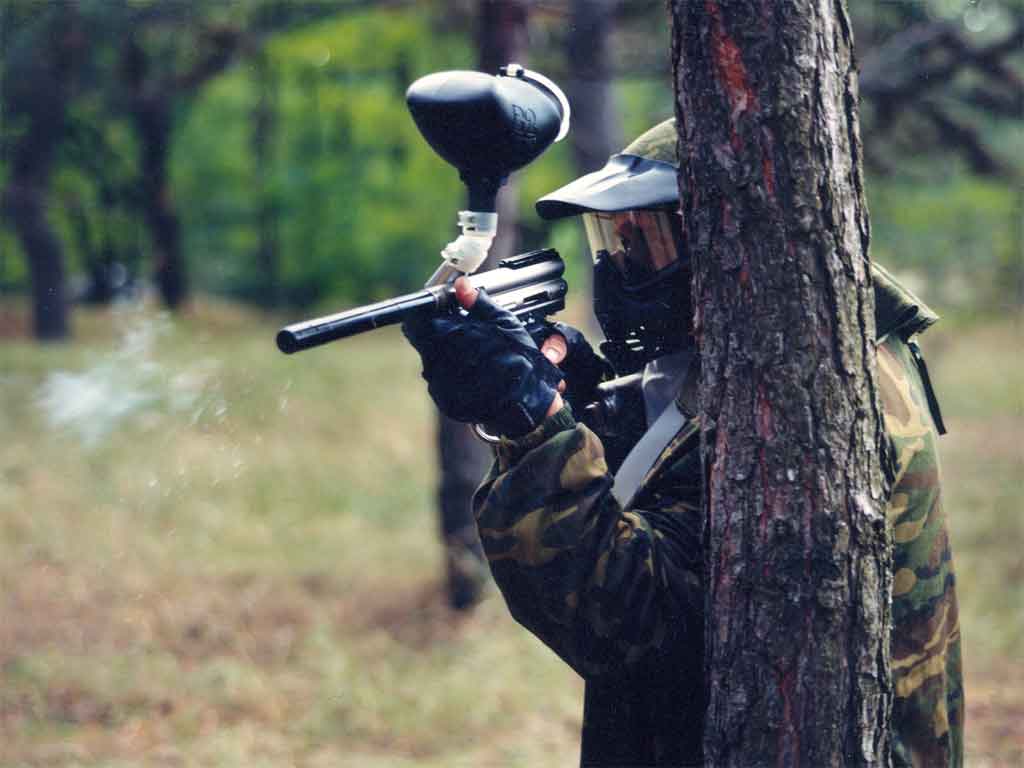 This was the same mistake I made. Pick a good tree.

I was playing paintball one time with some guys at a weekend retreat. It was my first time at paintball and I generally knew what to expect, but I wasn’t taking it seriously.

My team ran into the woods first and the second team would come after us in a few minutes. I took up a position in a shallow depression. The problem was the depression was way smaller than I thought it was and my body was barely covered.

I was also behind a big bush but I figured I was hidden ok. I saw the guy on the other team come around to flank me and waited. Apparently, he saw me too because he got behind a big tree and pretty quickly took me out with a few well-placed rounds. That was the last time I made that mistake.

A complaint I hear about paintball and airsoft is that cover could really be a thin sheet of plywood. In both of those games, the plywood would keep you safe, but the concern is that we are learning bad habits that way. That is a fair comment, but I would say if you go into Paintball with the mind-set and focus of training for potential combat and keep items like that in the forefront, you can still practice, have fun and learn.

In paintball, you are playing on a team with the idea of either wiping out the enemy or capturing a flag. You learn to communicate with your teammates in a different environment than elsewhere except maybe in sports. You get to plan and see how everyone executes that plan. Who does what they were supposed to? Who shows natural leadership? Who is fearless and who hides behind that same tree every single time. 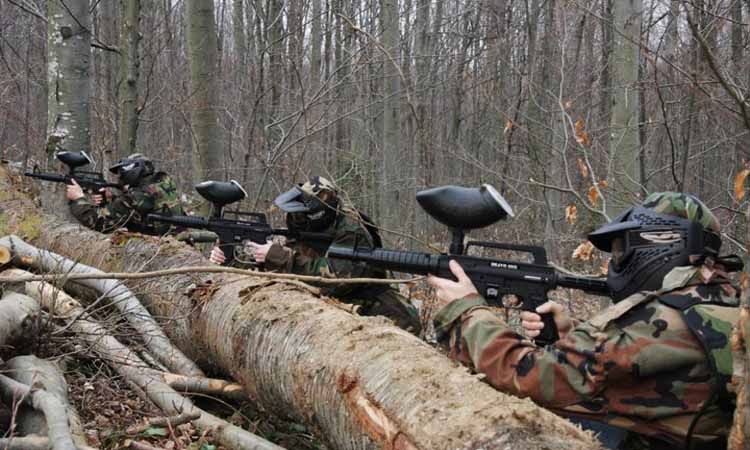 Teamwork is key in any combat scenario.

I know that shooting a paintball gun isn’t exactly like shooting a hunting rifle, or AR15. While they are fairly accurate, you aren’t generally using scopes with high precision sighting. We would spray paint-balls most of the time, but you could dial in a shot if you had good cover to hide behind while you locked in on your opponent. Practicing the art of hitting someone from behind cover, while they are moving is good experience and can be beneficial to someone who hasn’t done much more than shoot paper at the range before.

The flip side is learning how easily you can be shot and what doesn’t work. I tried to be a Rambo and ran through a gauntlet of people from the opposing team yelling and shooting like crazy. They calmly lit me up and I had the bruises to remember that for a few days. I was also hit trying to take cover behind a tree that was a little too narrow and got shot in the side of my rear. Ah, memories. Useful though because I learned that I would get shot if I wasn’t careful, moved quickly from cover to cover. All things I learned in the Army, but had neglected to remember and didn’t think this “game” required all of that discipline. It does.

If you have a really good game with younger players who are enthusiastic about playing, you will definitely get a good work out. At the bare minimum you are going to realize that running for your (play) life is something that requires you to have a modicum of physical conditioning. This should appeal to some of the Commandos who haven’t really moved off the sofa for several years. Get out on the field and see how you do. It certainly won’t hurt now and may save your life if the time comes when the real bullets are flying.

airsoft is a lot better for combat practice.
full sized replica weapons look and feel just like the real thing near same weight as the real steel unloaded.
airsoft is referred to as military simulation (milsim) for a reason. youtube ballahack airsoft or ss atlanta airsoft. some good places.

I was concerned with the entry price for air-soft, but agree that the concepts and training would be just as good. To your point, it would be more effective to train with weapons that had more similar characteristics as the real things.