Survival Lessons from the Hatfields and McCoys 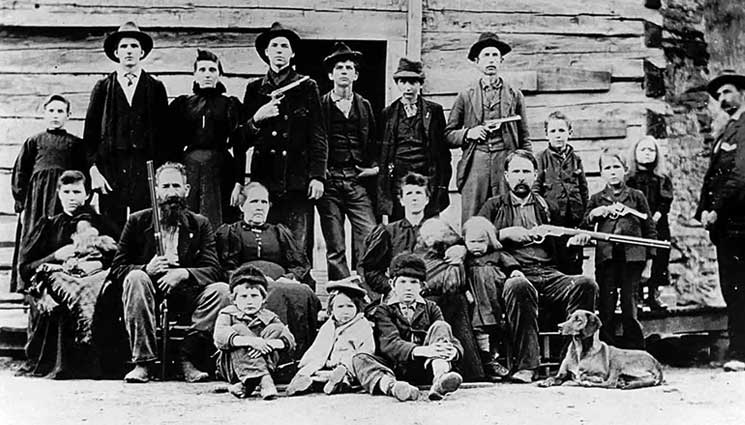 The Hatfields and McCoys

I recently watched the History Channel’s Hatfields & McCoys and was fascinated, like so many others to watch this interpretation of an American Legend. Part of the reason why I wanted to watch this mini-series was for historical significance. Another reason for this post is the many lessons I was able to glean from watching the Hatfields and McCoys that I want to share today.

For those of you who don’t know, it is the story of an infamous and bloody feud between two families living on the border of Kentucky and what is now West Virginia following the American Civil War. If you are interested in those types of stories or history from this period, I would highly recommend it.

The other and admittedly more selfish reason for watching was that I am reported to be related to the McCoys on my mother’s side. I haven’t verified this and can only trust my mother’s research so I won’t be going on about my alleged kin-folk too much. I am also aware that Hollywood may have taken a lot of liberties with this story, but the general history is well-known and made me think of several things that we could apply to our thought process in the Prepper community.

To set the stage (no pun intended) on what I am mean, it helps to consider the time-frame of this event in American history. The actual events of the feud occur after the end of the Civil War.

The time is 1865 or close to that and there are no modern conveniences like we have now. People live hard lives and are much more self-sufficient than most of us could hope to be for a long time. Healthcare was nothing like what we have in even what is considered third world countries and there weren’t any hospitals out in the country.

If you were lucky someone would fetch the doctor in town for you. If you couldn’t get to the doctor and the injury was bad enough, you would probably die. If you had a serious enough injury it was very common to amputate the limb because there were no antibiotics to fight infection.

Law enforcement didn’t have drones, most men carried at least a rifle or shotgun and everyone had their own views on justice.

I started to think about how it would be if the current world, us here in present-day were to have some type of long-lasting emergency that wiped out the grid. If something catastrophic were to happen in our lives, we could very easily be transported back to the 1800s. If that were to happen and we were suddenly living like the Hatfields and McCoys, what lessons could we learn from their story?

Alcohol and good ideas rarely hang out together

I don’t think I will get much argument when I state that alcohol in excess can easily lead to bad decisions. Most of the individual incidents portrayed in this movie stemmed from at least one person being too drunk. Alcohol slows your reaction time and clouds your thinking. What if you were responsible for being on guard duty and pass out?

If you are worried about defending your home or your family, the best bet is to keep a clear head and refrain from drinking altogether. I would say that at some point, a small drink now and then wouldn’t hurt, but to go through life being intoxicated every day is a sure-fire way to hurt someone, get hurt yourself or to be taken advantage of.

There are some people who I have talked to that are stocking up a lot of liquor to use for barter and that’s all well and good, but I would caution against partying like it’s the end of the world.

A ‘little thing’ can get out of control quickly

Since we mentioned alcohol, the next progression is fighting. In the movie, the Hatfields and McCoys are at an Election Day party where each side had their own wagon of homemade liquor that the boys were keeping company. At some point, words turned to fighting, then a knife came out and finally Ellison Hatfield was shot. This began as nothing more than two families bragging about which one of their patriarchs was the best and ended with a man dead. This in turn led to the deaths of three McCoys in retaliation. It did not end there.

If we find ourselves in an emergency situation where there is already a high amount of stress, tempers will easily flare. If you combine a high stress environment with alcohol and then sprinkle some firearms on top of that, you have to be extremely careful.

As with any situational awareness, it is better to be highly aware of your surroundings and potential threats so that you can avoid them as much as possible. Make sure your mind is able to work as effectively as possible to do what it was made to do and that keeps you alive. Learn to walk away or diffuse situations before they get out of hand.

There is strength in family

I will have to give some credit to both the families even if that credit seems to be part of their downfall. For the most part, the two families were fiercely loyal to each other. Whether this was because of their proximity or as I suspect, an instinct for self-preservation both families were always there for each other and were willing to sacrifice their own lives to protect or avenge anyone else in the family.

If you expand this to your larger group, we could be talking about your neighbors or your community. Do you expect to have this type of loyalty from your extended family? I hope so, but I don’t really count on it. I do consider my immediate family to be strong and willing to do what is necessary, but the bonds they had in the late 1800s are no longer as strong now for most people I think.

It is important that your family is on the same page and talking about prepping with them is the first step. Your core family could be the difference between you living and dying in a disaster so you will all need to learn to count on each other. Make sure that anyone who you foresee as being part of your “family” in a disaster situation will be able to be counted on to ‘have your back’ as much as you can now, while we can.

You could argue that most of the developments in this feud were actions, possibly under the guise of “honor”, that resulted in death, which were solely the fault and responsibility of the actual men who pulled the trigger. This may be true in a court of law, but the men who led both of these families can’t shirk from the lion’s share of the blame for all of the killings. Whether this was country justice is irrelevant, both of these men and I assume all leaders of their home in that time were in charge of their families. Nothing happened without their permission and approval.

As leaders, you may be put into situations were your judgement, convictions, morals and values will need to guide the actions of others. If you find yourself in that type of situation, it would help to appreciate the special responsibility you have been given and treat it with the humility it deserves. If you are responsible for others lives, make that something that has a heavy place in your heart any time the threat of harm is discussed.

Sometimes grace and forgiveness are the best plan

There were two main elements of the movie that demonstrated this to me. The first was when one of the McCoy daughters fell in love with a Hatfield son. This didn’t go over well at all with Randolph McCoy and he essentially banished his daughter. I don’t believe they ever spoke after that and she died shortly after giving birth and losing her young daughter to illness.

The second was the larger story itself. It seems that most of the feuds origins were from Randolph McCoy’s refusal to forgive “Devil” Anse Hatfield. Had these two made up before the fight escalated to killing, who knows how many lives might have been spared.

It is easy to become angry in certain situations and you will need to be aware of how destructive this can be if we are all on the brink of chaos in the first place. Sometimes, it will be better for you to forgive than to avenge a wrong. It may be better to talk through your problems than to lock and load. If you are able to show grace to your fellow-man, they may be able to demonstrate forgiveness to you.

Just some thoughts I had that I wanted to share. Please let me know if you have any ideas in the comments section below. Thanks for reading and I hope to see you again at The Prepper Journal.

I watched that show as well. The violence escalated very quickly. One man (Hatfield) often took matters into his own hands and McCoy who it seemed thought he was pious enough to be akin to God and he judged just as harshly.

Thanks for commenting David!

Yes, it was fascinating to watch – and I know it was fictionalized but still. The feud is not in dispute and neither are the deaths.