Rescue In The Sea of Cortez

Today’s post is courtesy of guest blogger Captain William E. Simpson II – USMM. We are doubly fortunate because the good Captain will be featured on the next installment of Doomsday Preppers premiering March 5th. We will of course be watching with great anticipation and will follow with our nearly famous Doomsday Preppers Diary. Stay Tuned! Captain Simpson’s story shows the importance of redundancy. In this case it is communication equipment that could save your life.

It was another beautiful day in the anchorage at El Cardonal on Partida Island. Well protected and nearly surrounded by mountains, it is about 24 miles north of La Paz in the Sea of Cortez. The white sand in the anchorage reflected sunlight glistening through the turquoise waters that lapped at our hull. On the outside of the anchorage it was a much different story; an ill north wind was building. Even so, there was little more than a fresh breeze inside the anchorage that morning, just enough to temper the 80 degrees that we felt as we hiked through an amazing cactus forest sandwiched in a canyon just above the sandy beach onshore.

Our boat had been at anchor for about two days and we planned on staying for about a week, so we had our kayaks tied at the stern of our boat. It was nearly noon when we returned to the Iron Maiden, pushing past the kayaks with our 14-foot Alaskan shore boat to tie up. The wind on the outside had continued to build all morning and by the time we returned to our boat it was blowing 40-45 knots outside the anchorage.

As we started to prepare lunch, suddenly a worried voice crackled over the VHF. “I have lost my husband in our dinghy” she said. At first I thought it was somebody in one of the protected anchorages, since I couldn’t imagine anyone being offshore that day. The weather forecast was for wind up to 40-45 knots and seas 15-17 feet. Again she called, and it was clear by the emotion in her voice that she was worried sick. By then, three vessels were responding to her call: Nordic5, Rutea, and our vessel, the Iron Maiden. It seemed that my radio had the best copy on her signal so I assumed the role of handling communications with her. 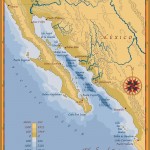 As I learned, Maggie was the worried voice on Blue, a 46-foot motor yacht. Maggie reported her vessel position was about five miles offshore Partida Island and due west from our anchorage at El Cardonal, in the middle of the heavy seas and wind. She relayed she was currently alone onboard except for her 86-year-old mother who was seasick, and that their dinghy, a 16-foot RIB style inflatable, was being towed when it tore loose from the stern of their vessel in heavy seas and was in jeopardy of being lost. They had maneuvered their boat so that her husband, Neville, could jump aboard the dinghy in an attempt to bring it back alongside and take it under tow again when the dinghy with Neville aboard became separated from the Blue. Maggie reported that she had lost all visual and radio contact with Neville and the dinghy, and that’s when she called for help.

About a month earlier we had met Neville and Maggie aboard the Blue in the anchorage at Los Frailes, on the East Cape side of the Baja Peninsula, so I knew the folks and their boat. Naturally, Maggie was worried sick and her emotions had my wife teary-eyed. I needed Maggie to focus on working the problem so I asked her to gather and provide me with key information (time when he was lost, lat/long position, boat info, dinghy info, names, numbers, etc.). I set Maggie to work by having her get the boat hove-to and looking for Neville while she relayed the information I would need. She said that Neville had a handheld radio with him, but given the fact that nobody could reach him, I had concerns he had lost the radio, or was incapacitated and maybe in the water. As I repeated the information provided by Maggie during the communications over the VHF, I knew that the other boats (Rutea and Nordic 5) were listening and also analyzing the situation.

The sailboat Rutea, who was listening in at anchor a few miles nearby in Caleta Partida, was also helping us handle radio traffic and said they would try to call the Mexican Navy or the Coast Guard, so that I could continue talking to Maggie while Rutea hopefully passed off the information that was collected so a rescue could be initiated. At this point, nobody had reached the Mexican Navy or the U.S. Coast Guard. I also asked Rutea if there were any boats in their anchorage that could get underway quickly to begin an initial search. Hearing the conversations, the sailboat Nordic 5 had already been making preparations to get underway and was able to get underway quickly, leaving Caleta Partida in about 30 minutes from the initial call from Blue.

Neil on Rutea called me back on the VHF after about 15 minutes and reported that they were unable to reach anyone on their powerful sideband HF radio. Neville and the dinghy had been lost at about noon and now it was nearly 1: 00 pm, so we had little daylight left. I then realized that I would need to use our Iridium sat phone and called the USCG in San Diego directly. I passed the information I had collected to them, at which point they had me stay on the line while they contacted the Mexican Navy. We essentially had a conference call with the USCG, Mexican Navy and the Port Captain in La Paz. The USCG had a Spanish translator online who would verify the info I had given and then repeat it to the Mexican authorities in Spanish.

I knew that the vessel Pacific Pearl was also at anchor in the nearby anchorage of Caleta Partida, since we met them the day before when they

rode their dinghy over to El Cardonal to hike the beach. We had originally met Bill and Chris off Pacific Pearl up at Catalina Island last fall, and we knew that their high-speed 60-foot power cat would be perfect for getting underway and on scene quickly. They didn’t have their VHF radio on, so I called Rutea and suggested that they contact Pacific Pearl to see if they would provide assistance searching with their vessel. They agreed and were underway within 30 minutes. At that point, we had two fellow cruiser vessels underway and searching for Neville Hansen.

Meantime, the Mexican Navy dispatched a ship and a helicopter to the scene. It was about 2 : 0 0 pm when I saw the helo searching offshore. In the heavy seas it was going to be a needle in the haystack search, and my wife and I were both concerned. Laura and I looked at each other and the thought about jumping into the search was mutual, even though it would ta ke us at least an hour to prepare our boat for sea. We had been ‘unpacked’ for a week-long stay, so we had all the toys in the water and everything out inside the boat, including the sewing machine. We imagined that if it was me in the water, Laura would want everyone searching for me, so we decided to head out and join the other two boats already searching in the hazardous conditions.

When we got outside the protection of the island, we were amazed at just how bad the seas were. Every wave breached the nine-foot-high bow of our 88-ton steel boat and it was like submarine duty. We proceeded to a point about five miles offshore and the point where Neville Hansen was lost and last seen with the dinghy. The wind and seas would have driven him in a southerly direction so we plotted a course just outside the expected line of his drift so we could search without looking into the blinding afternoon sun reflecting off the towering white horses.

We took a pounding heading west with the 40- to 45-knot northerly winds and seas on the starboard beam. Then we finally reached the point where we could turn south and begin our line of search. We had tracked about four miles south when we heard that the Mexican Navy had found the dinghy and Neville, both safe, about five miles farther south from our position. He was found clinging to the dinghy which was overturned. Other than being sunburned, soggy and shaken up, he was fine. It was the outcome we had all hoped and prayed for.

Hearing the good news, we altered course and angled back towards the protection of the island some eight miles away. We managed to make anchorage in the more southerly anchorage of Caleta Partida by pounding north four miles once we reached the western side of Ispiritu Santo island, which was being combed with heavy seas and breakers.

Night was falling as we approached the protected anchorage of Caleta Partida on Isla Espiritu Santo. As we pressed forward through the heavy breaking seas, we got a call on the VHF radio from Neil and Ruthie on Rutea, who insisted that we come to their boat for a nice hot meal. We gladly accepted their offer and enjoyed a great meal and conversation of the day’s events with them. It turned out that like us, Neil and Ruthie had also sailed in the Sea of Cortez in the ’90s with their three kids, and we all still look upon those days with great pleasure. Earlier that day, Neil and Ruthie courageously offered to crew aboard our vessel during our search effort. We considered their offer, however the time lost in reaching Caleta Partida and loading them onboard would have reduced our on-scene search time by at least one hour, so we elected to go it ourselves.

Thanks to the overall coordinated assistance of several cruising sailboats, Rutea, Nordic 5, Anon and the power cat Pacific Pearl, and through the outstanding performance of the Mexican Navy with the help of the U.S. Coast Guard in relaying the time critical information, Neville Hansen was successfully rescued that day, safe and sound.

There were many lessons learned by everyone that day:

In the final analysis, Maggie was alone (except for her sick mother) on the boat, yet, even though she was emotional, Maggie maintained her composure and was able to perform the key functions that got Neville rescued.

Capt. William E. Simpson II is a U.S. Merchant Marine Officer with decades of boating and expedition sailing experience, who has successfully survived long-term off the grid at remote uninhabited desert islands with his family using sailboats that he equipped for that purpose. Capt. Bill holds a U.S.C.G. 500-ton captain’s license for commercial inspected passenger vessels, including, power, sail and assistance towing vessels. He is also the author of many articles on sailing and the book ‘The Nautical Prepper‘ (Ulysses Press)