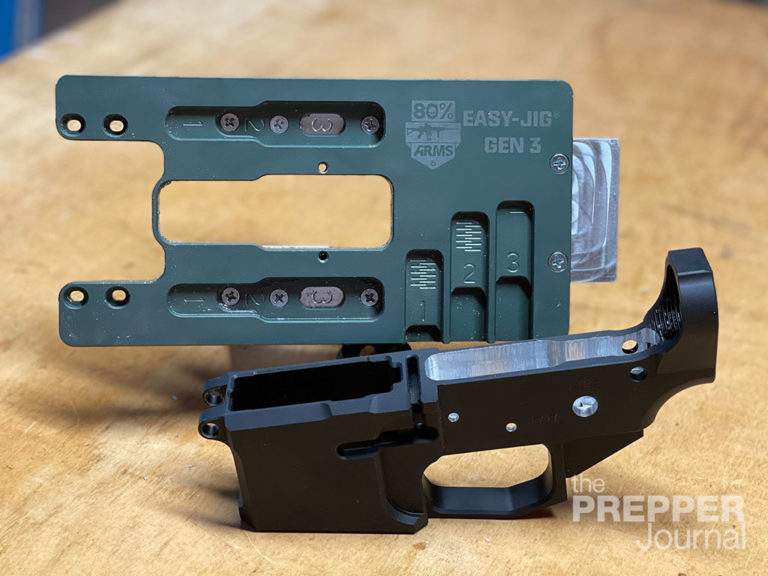 I have heard about 80% receivers for years but never fully appreciated their usefulness or purpose. Of course, I have purchased firearms in the past and while the prospect of building my own sounded interesting, it did not reach the level of interest that I wanted to pursue it too much further. That is until I was approached for a review of the 80 Percent Arms Easy Jig.

What I wanted to show in this article was what I learned from the process and my experience first-hand with the 80% Arms Easy Jig. I am not an engineer by any stretch and do not rebuild engines in my spare time. I am also not someone who knows every power tool and can fabricate things on my own. I am just an average guy, with average skills and experience but I think I will show you how that is more than adequate for this type of 80% receiver project.

Before we get into the review, for those who don’t know an 80% lower receiver is an unfinished chunk of metal in the shape of a firearm. It cannot without extensive modifications be used as a firearm itself and according to the ATF, it  has not yet reached a stage of manufacture that meets the definition of “firearm frame” or “receiver” according to the Gun Control Act (GCA).

When you purchase a complete rifle or AR-15 lower receiver, it will be milled out to accept the parts of the Fire Control Group – or the trigger. An 80 % lower has not gone to that step yet so technically it is not a firearm. The entire section where the fire control group would go is still sold metal. That lower has been taken 80% of the way to completion and the rest is up to you.

This is where the fun comes in. 80% lower receivers, since they are not a firearm do not come with serial numbers and you do not have to have any license to purchase them. They can be shipped directly to your door without having to go through an FFL.

At least they can right now. Just yesterday, the administration announced they were targeting “ghost guns” so this may be the last time you could legally purchase these items without a lot of paperwork. There has already been at least one raid by the ATF against another manufacturer Polymer80 in December. Laws can change and I am certainly not a lawyer. This is not legal advice. Use your best, informed judgment. Milling out your own 80% lower receiver is a fun project that can be done in a few hours with basic tools but you have to decide whether or not this is right for you.

Assuming it is and you do want to make your very own milled out AR-15 lower receiver, let’s proceed.

What’s in the box?

To convert your own 80% lower receiver you just need a few things. First, you need a good 80% lower and you can find these in a few places. I went with an AR-15 lower from 80percentarms.com, the maker of this jig.

Next, you will need the jig and for this review, I was rocking the 80% Arms Easy Jig – Gen 3 which is a thing of beauty. to start with. The box has everything you need to assemble the jig. There is a very good set of instructions as well.

You need a router to mill out the lower receiver and I also got this from 80% Arms as I did not have one myself. I have never even used a router before which I’ll get into here in a minute. A vice is a must-have also as the entire process needs to be secure as you are working on removing the metal.

The first step is to remove the router plate from your router so it can be replaced with the R.A.P (Router Adapter Plate) from the 80 percent arms easy jig kit. This is a simple process (or so I thought) and just requires removing a few screws on the model I had.

Then with the router plate removed, you thread on the speed mill from 80 percent arms. This is what actually mills out (removes) the 6061 aluminum that the lower is made of. The mill is extremely sharp so it’s recommended to leave the protective cap on during this step. So far so good.

The instructions tell you to remove the router plate and replace it with the R.A.P but my holes weren’t lining up. I tried every which way to get the plate to fit the holes in the router but it wasn’t working and I was just about to call 80 Percent Arms when I flipped the page of the instructions.

Apparently, there are many different types of routers (duh!) and the instructions for the one I had were on the next page. This is the only snag I hit with this entire process – getting the router plate on. My router only had two screws that would line up so only one side of the router plate would snug down. But there was another piece to add.

There is a small block of metal that becomes a mounting point once you secure it to the router and then a third screw into the R.A.P. snugs it all down nicely. Again, this is the only place I felt the instructions weren’t 100% clear but I was able to figure it out and the diagrams did show me how to do it.

Once the router was ready, it was time to assemble the actual Gen 3 Easy Jig itself.

The jig was very easy to assemble with clear instructions and all the correct parts. One thing I appreciated is that all the screws were different sizes and shapes for each use and you had just the right amount of each. The prevented me from trying to put the wrong screw in the wrong hole.

Everything on the 80 percent arms easy jig aligned nicely with no binding. Once the jig was assembled, it was time to get the 80% lower ready to mount in the jig.

Mounting the 80% lower was pretty simple, the only issue was that the takedown pin was really hard to insert into the front takedown pin block hole. I tried wiggling the lower back and forth but had to tap the pin in at the end lightly to get it all the way through.

The last step is to attach the drill block. This was used to drill the pilot hole and you would always start the router out in this hole when you made another pass.

Once you have your lower and jig all assembled, mounted and secured into your vice, you are ready to drill the pilot hole.

Using plenty of cutting fluid (I used WD-40) to lubricate the drill, go all the way through the lower.

The majority of this process is passing the router over the surface of the lower in gradually increasing depths to remove material. The jig keeps the router from going outside the lines so to speak with a series of pins that you attach the bottom of the R.A.P.

I did have one instance where I didn’t tighten these down enough so they wobbled a bit. This was my fault completely and once I resecured them, the router did an excellent job of removing material.

The Easy Jig has a gauge you use to set the router bit depth and you just go slowly, until you have removed enough material for the first guage.

With each depth, you change the pins on the bottom of the R.A.P so that they hit different groves in the jig and guide the router on where to remove material. It really is a simple but beautiful design and I always felt in control of the router.

This is a little bit of a messy project though and gloves, eye and ear protection are needed. From my position behind the router, I was constantly being hit with small aluminum shavings so take that safety precaution seriously.

One you remove all the material, you flip the jig on it’s side to drill three more holes for the Trigger Hammer and Fire selector.

My very first 80% lower receiver milling was a success I think. Granted, it’s not as smooth as you get when the finished lower comes from a factory, but it’s pretty darn close. You can see the fine imperfections in the photo above, but inside is still fairly smooth. The top edge could use with a light filing just to remove a slightly sharp edge but other than that I think it came out nicely.

Final thoughts on the Easy Jig

As I said in the beginning, this was a really great project. I took my time and it still only took me around 3-4 hours. That is with taking a break or two and clean up. The time spent getting the router plate installed was not indicative of any problems with my kit and next time, that should only take minutes.

The 80 percent arms easy jig is a quality piece of equipment that does what it’s supposed to do. The instructions are very simple and clear and they also have plenty of movies if you prefer to learn that way. What’s next? Well, I am going to purchase a build kit that has all of the other parts I need to make a complete firearm, and then I’ll update this post with that.

I have mentioned before that I believe firearms are an important tool that can be used for your survival. This kit gives you another option toward that goal and I know I will be using it again.

The bit for the router was not true and ended up breaking on the first pass. The bit is junk.

That wasn’t my experience at all. Did you contact them and talk about a replacement?

Being taken 80% of the way to completion and the rest being up to me has not gone well in the past… according to my gf.