Are You Prepared to Deal with a Fire at Home? 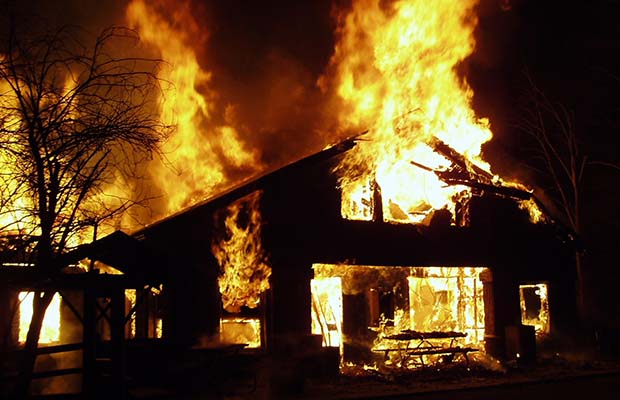 Every year, over 2500 people die and around 12,000 are injured in a fire at home in the United States. Direct property loss due to fires at home is estimated to be over $7.3 billion annually. Like any other man-made catastrophe, home fires can also be prevented.

To protect yourself and your family, it is essential that you understand the elementary characteristics of fire. Because fire spreads very quickly, there is absolutely no time to collect any belongings or make a phone call. In less than two minutes, a small fire can become fatal; in about five minutes, an entire residence can be engulfed in flames.

Smoke and heat from fire can be more hazardous than the flames. Inhaling the extremely hot air can char your lungs, while the noxious gases can make you drowsy and disoriented. Instead of waking up due to a fire, you may fall into deep sleep. Contrary to popular belief, asphyxiation is the leading cause of deaths caused by fire, surpassing burns by a 3-to-1 ratio.

A large majority of home fires are caused in the kitchen, while cooking. These fires are also the leading cause of injuries. At night, fires are mostly caused by cigarettes not put out properly, lack of precautionary measures around fireplaces, and heating appliances kept close to combustibles and furniture. These fires are considered more dangerous than others as they can fume for quite a long time before being discovered.

A fire at home moves quickly!

In less than thirty seconds, a minor flame can get totally out of control to become a major fire. It takes less than five minutes for a house to be filled with thick black smoke or to be completely engulfed in flames. Most fatal fires happen while people are sleeping. If you are woken up by a fire, don’t waste time trying to collect any things as fire spreads fast and the smoke is too thick. You will barely have time to escape.

The heat from fire is more dangerous than the flames. With room temperatures rising to 100 degrees at floor level and 600 degrees at eye level, the heat alone can kill. The hot air, if inhaled, can scorch your lungs and leave you dead in a matter of seconds. The heat can also melt your clothes and skin.

Fire isn’t bright, its pitch black. Fire starts bright, but quickly produces black smoke and complete darkness. If you wake up to a fire you may be blinded, disoriented and unable to find your way around the home you’ve lived in for years.

Flames do not kill as many people as toxic gases and smoke do. Oxygen is used by fire to produce toxic gases and smoke that kills. Inhaling small amounts of these gases can leave you disoriented, short of breath and drowsy. The colorless fumes can put you into deep sleep even before the flames reach you.

You can only prepare yourself and your family if you know the characteristics of fire. In case of a home fire, know that every second counts, so your family and you must be prepared. Have a fire escape plan and make sure each member of your family knows it well. You must keep some of the necessary survival supplies in your home. Keep an extra door as a fire escape route and see that it is not blocked in any way at any time. Install fire alarms and keep a check on them regularly to make sure they are functioning. Here are some tips to help you prepare:

A properly installed smoke alarm is the only thing in your house that can alert you and your family 24/7. A functioning smoke alarm enhances your chances of surviving a lethal house fire considerably.

Install smoke alarms that contain both photoelectric and ionization smoke sensors. Test their batteries monthly to ensure that they are in working condition. See that you have a smoke alarm installed on every level of your house, especially the basement. Sleeping areas should have smoke alarms both inside and outside, this is especially recommended by the US Fire Administration.

Furthermore, disabling a fire alarm can be a fatal mistake. Open a door or window, or wave a towel at the smoke alarm to clear the air.

What to do during a fire

If, even after all the precautionary measures, a fire happens to break out at your residence, follow these tips to ensure survival:

How to escape a fire at home

To ensure survival in case of a fire at home, you should know any obstacles that may hinder your escape route. For example, gratings or grills on windows usually have a fire safety feature that allows them to be opened easily from the inside.

Make sure you have fire escape ladders if your home is of multiple stories. Ensure that the anti-theft mechanisms that block entry from the outside are easily opened from the inside. Your family members’ safety is as important as yours, so you should teach them all the precautionary measures, as well as conduct a drill at least once a year so they know how to escape a deadly fire.

About the author: James Smith is a survivalist, who loves to write about survival skills and techniques. He has extensive knowledge about different survival kits and other survival supplies which he loves to share with others by writing blog. Follow him on twitter @jamessmith1609.

As a native of the inter-mountain West, I would also urge homeowners to create a defensible space around their residences. Wildfires destroy a lot of homes, as evidenced by recent events in Texas and the Left Coast. Preventing a fire is much less costly than putting one out.

I read on an Aussie prepping forum that some preppers out there who are blighted by explosive forest fires cause by Eucalyptus trees have not only cut back the trees nearer their homes but some have fitted sprinkler systems to soak the roof and walls of their homes.

Plus one to both your post and Bolo’s above! IN my native state of California, Eucalyptus trees were imported 150 years plus, ago, as a renewable source of building lumber. they are an explosive tree when burning and their oils burn hot, fast and LONG. Fire is one thing that truly scares me MORE than anything else. I feel like I’m woefully under-prepared to deal with a brush fire in the area where we live, we’ve got the defensible space as much as we dare to do at this point. Our local fire agencies pooh-pooh the idea of “fire storms”… Read more »

Talk about coincidence, I just ordered 2 Carbon Monoxide detectors for the house, I recently replaced the door to the room that houses the central heating boiler ( I think you call them furnaces in the US) with a ONE HOUR rated fire door, replace the cheap smoke detectors with ones with a ten year battery life and got a rope emergency escape ladder for upstairs. I have two 1kg dry powder fire extinguishers as well.

Good article – but there’s a whole sub-category of prepping for house fires associated with intentional arson during a civil disturbance …. some are along the same lines as prepping for wildfires – others are linked to your defense measures ….

Someone submitted a more comprehensive article for the Prepper Writing Contest on Dealing with Fire Illini that will be coming out shortly that might be right up your alley.

If you get lost while in the fire get to a wall. If you pass out while on the wall the primary search team of firefighters will find you on the wall. One of the firefighters on the search team always “holds” the pattern or sticks to the wall while searching a room for victims.

I now keep a fire extinguisher next to my gun safe in my bedroom closet. Reason being, if I am roused in the middle of the night by my smoke detectors, I can grab that one, instead of the normal one all the way downstairs in the kitchen that may be on the wrong side of the fire. NFPA calls for a class B extinguisher every 50 feet of travel distance in workplaces, no reason not to adapt that for your home, garage, shop, etc. Second point, Kidde recalled a TON of their cheaper plastic nozzle extinguishers, they will replace… Read more »

This is great and really thorough.