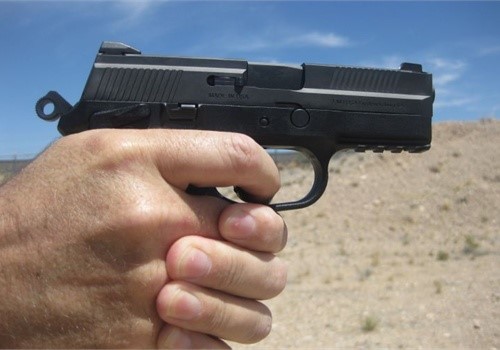 If our accuracy has plateaued or backslid, we may have picked up one of several finger habits. Two we can check for are resigning pacing to our fingers – versus eyes and brains – and the reset portion of our trigger pull. There are some self-check tests we can run for either, and drills that can help restore or engrain better control.

Some of those drills also have benefit for moving-target and stimulus-reaction training, solo or with a partner.

*Disclaimer now: While some of the following images display legitimate problems (particularly grip/finger placement issues), others may have just been caught mid-action. I do not mean to imply they have runaway or slap-happy fingers, I just needed to demonstrate the ideas. 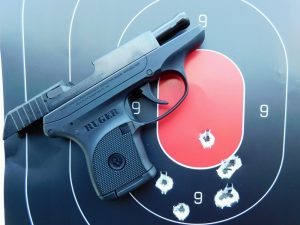 Coming Off the Trigger Between Shots 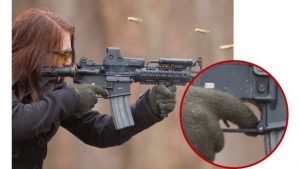 We should absolutely be cognizant of breaking the magnetic attraction between fingers and the inside of the trigger guard. However, it needs to be a conditional, situationally aware, deliberate selection – not muscle memory.

One, if it’s jerky and too fast, it’s impacting our follow-through and shot placement.

When we need those next shots, we can end up rushed and trigger pull suffers for it, with experienced shooters actually losing some of their longtime fundamentals and accuracy as a result. 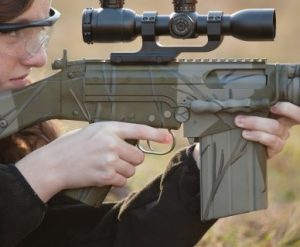 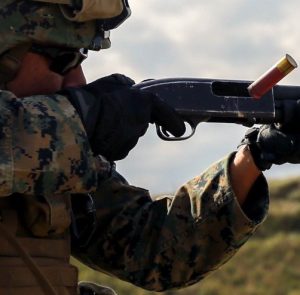 Just like beginners who come off the trigger and real routinely slap it from the rush, far wider patterns and more chaotic patterns result.

Back up and return to some fundamentals drills now and again.

To combat it, here and there, run drills where you work each stage of trigger pull separately and distinctly. Choose when to break the shot, and when to reset, and when to disengage the trigger; don’t let the finger do it automatically. 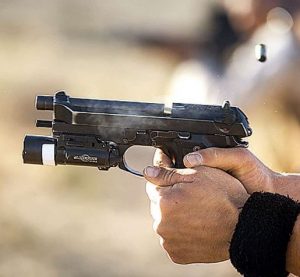 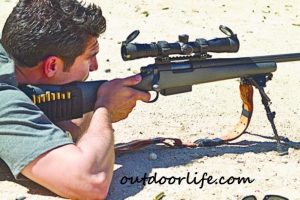 (A lot of hunters – including archery – have no idea why that’s going to be a challenge for other types of shooters. Those make excellent finger-watching partners.)

Painfully slowly, ease that trigger back. Break the shot and pull through.

Stop, right there, trigger to the rear. Hold it. Count to random one-up numbers. “Now, I reset.” 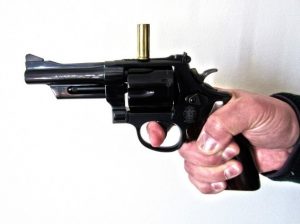 * Dry fire and airsoft/BB gun practice is great if it’s good practice, but diagnose and work maintenance live fire, too.

Add-On: With the pull reinforced, randomly or in cycles, choose whether you’re taking another shot, or whether you’re coming off the trigger. Don’t only work mag-lock or single-shot drills.

(Choose if/when we’re returning to ready, too; don’t let arms decide when it’s time to chest cradle a gun or what ready position is safest – use the brain that makes us more than meat puppets.)

Some other time or later, go through the trigger press and reset in a smooth continuation, but slowly and deliberately and with distractions that engage the brain. 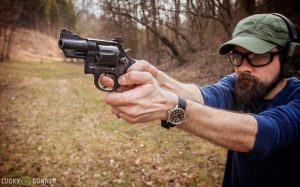 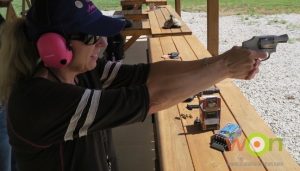 Count backwards from 97, mentally fill in a Sudoku box in some pattern, run through the alphabet backwards, work exponentials of 2, come up with synonyms or rhyming words… The distraction slows us down, engages multiple brain pathways, and helps embed the actions as synonymous with deliberate thought, not just muscle memory that may not actually serve us well.

Also practice taking a beat to actually assessing what’s around.

A partner can hold a strong light or a laser on a target (and move it between targets) for variable amounts of time and a variable number of shots. 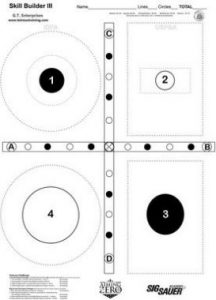 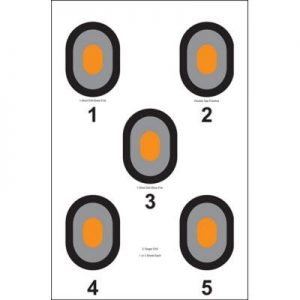 Or, use a cell phone/timer to create random, variable shot counts before we enter assessment and disengagement phases.

Not knowing exactly how many shot’s we’re firing, we stay ready to shoot after each. With a partner, we’re also watching to see if we’re actually clear, and if it stays clear.

That help train us to control our finger and hands/arms, not let them take over. 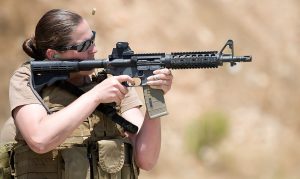 For most practical shooting, we need to find a balance between “a lot to the everywhere” and “one shot, one kill” level of precision (“precision” in this case meaning “grow gray and die of old age between shots”).

Sure, sometimes close is enough to wing them, slow them down, make them duck – covering fire, right?

(Uhh …bystanders? …other responders? …flammable/explosives near the target?)

We’re looking for the marriage of speed and accuracy at varying distances, using our slow-fire and near-target groups as a baseline – not the bulls-eye or group size itself. 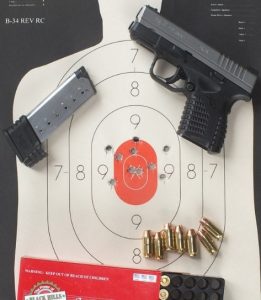 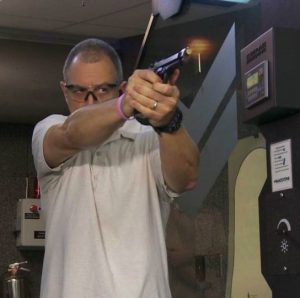 There are a lot of legitimate reasons that our patterns loosen up at “distance” – distance being variable platform to platform, shooter to shooter.

Sights/optics cover more of the “smaller” target resulting from distance, creating fundamental limits. Tiny and acceptable movements create angles, which get wider apart the further from us they go.

However, we can maintain our level of accuracy at distances, particularly “near” ranges (3-7 to 25-30 yards, or out to 50-75 for shotgun and 75-100 yards for reasonable base-level defensive rifle). It just requires more control, which typically translates to a slower rate of fire.

And that’s what we need to check: That our aim is off because of our inherent and real limitations, not due to runaway trigger finger. 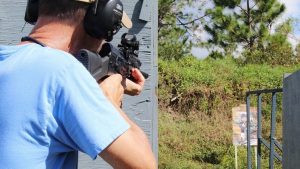 Again, we want to remain in control. Our trigger finger doesn’t get to operate on autopilot.

Without a shot timer or editing software, determining the time between shots at different distances is difficult, particularly working at close range or with dot optics or lasers.

The better and faster a shooter is, the more difficult it gets. Regularly, though, if we record even just the sounds with a cell phone in our pockets, we can hear that there is a difference in the times between sets of shots.

Just like when we take a beat for that one perfect shot at the T or face or drop-dead triangle. 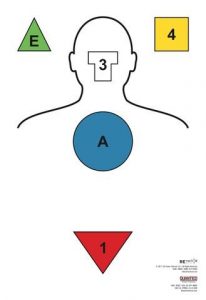 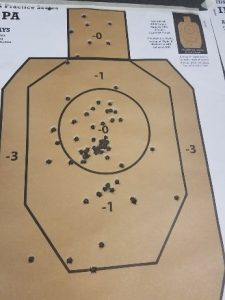 And that’s exactly how we test and practice it if we’re restricted to single-lane and-or single-depth ranges.

The further/smaller our target, the more perfectly aligned our sights need to be to avoid deviations. 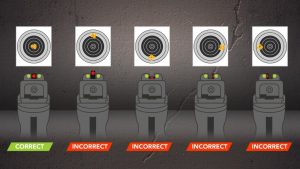 If our finger is in control, working off a count timer, instead of our brains registering “now” as our sights align, it’s likely we won’t see a consistent pattern grouping for diagnostics.

But we can hear it, usually.

Review, and if all you’re hearing is a consistent pattern at the first 2-3 distances (past that, if you’re not hearing slowed pacing there, too, but usually it’s the next-closest and the one after that that really sees rushed shots), check the targets to see if your spread is acceptable and still in that letter paper or dessert plate we need. 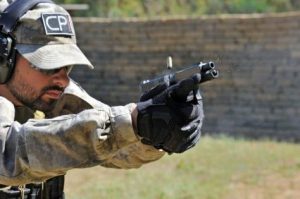 If not, concentrate on making those clean shots, not just quick ones.

The goal is to engage the bad guy as quickly as possible (or shoot as much dinner as possible; I’m easy).

“Engage” means hit him. “As quickly as possible” means “only as fast as we can land solid hits”.

Sometimes just blanketing an area in lead is okay. Mostly, our target is not the only thing downrange, and we really need our target to drop before they get closer/further.

Too, we need to be able to make that hip-neck-T/triangle/disconnect shot when we’ve determined center mass is not working. 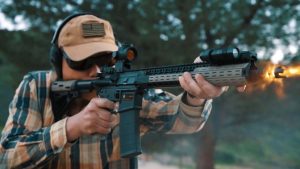 If our finger is used to being in charge, running as fast as it can regardless of our sight picture because we got used to shooting at a certain speed, we can’t make those shots when we need them. We need to know if that’s a problem, so we can correct it.

(The first issue’s fix-it drills can help there, too.)

Muscle memory is great, until it’s not. When training for practical scenarios, whether it’s hunting, self- and home-defense, or some kind of combat, we have to be especially cognizant of what we’re embedding. 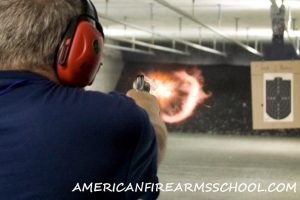 Especially if we also shoot sports, with the habits they can instill, we need to spend time on practical practice and engage our brains to avoid having those habits become life threatening to us or others.

Taking control from a trigger finger both in when and how we get off the trigger, and when certain levels of accuracy is required – and slowing down or speeding back up, deliberately, target by target – is a huge part of that. It’s something many shooters either never develop, or actually lose as they fall into the rhythms and ruts of habit.

A little practice here and there is all it takes, but work them live fire as well as dry. These are both cases where our actual habits tell most at the range, with actual bangs and projectiles punching patterns that don’t lie.

I really need to start practicing how to handle firearms.