Knowing it, we can amend our maintenance and practice to get the most out of our gear, time and gunpowder and be more ready for real-world needs. 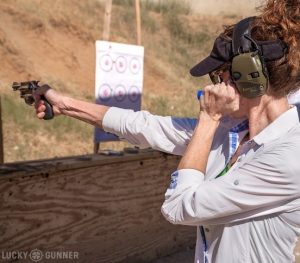 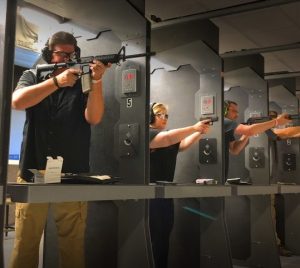 Eventually we have to burn some gunpowder, but the majority of skills can be developed and refined without it.

We’re actually best served if at least some of our training time is devoted to the places we’re most likely to deploy a firearm – home, entering and leaving vehicles, workplaces, etc. House and yard can also amply accommodate training time with our battle rattle. 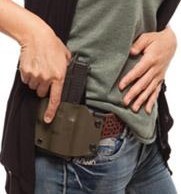 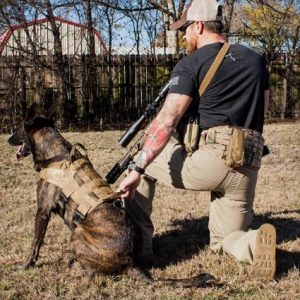 Core body strength, cardiovascular strength, and drills to strengthen leg joints and arms against sudden movement and – in our case – shifting terrain makes for a better gunfighter. It creates resilience to injury while increasing our accuracy and stamina.

Being able to move is big all on its own. It’s not actually practiced much in classes, but it does get verbalized: Move. We hear it different ways, but frequently.

A moving target is harder to hit.

Move backward to gain and maintain distance from an attacker. (Remember the ol’ nuggets: “Distance favors the ranged weapon” and “greater distances favor the better shooter.”) 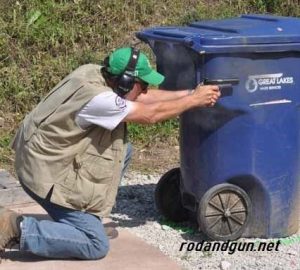 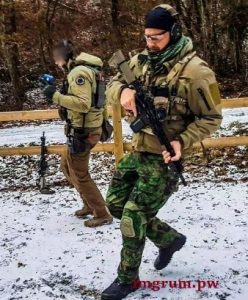 Find and hug cover, and then move from cover to cover while jockeying for advantageous position.

Move to the X, and move the hell off the X when necessary.

The ability to pop up and down behind cover, slide along cover to engage from a slightly different place, advance or retreat, and find an angle where we can end the threat relies on having bodies that will respond to our commands. 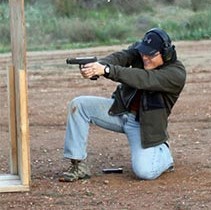 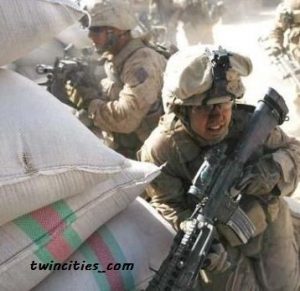 Age and injuries are among the many things that affect just how much we can move. The same-ol’-same-ol’ information that gets passed around isn’t as effective for us. That doesn’t mean we shouldn’t bother. 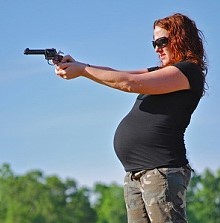 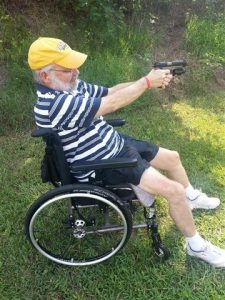 If anything, it means we need more exercise – retaining current mobility and working the details on how and where we carry.

A holster or sling isn’t 100% required, but, gosh, they’re handy – especially if we’re preparing for Big-Time Badness. Even if we start with a shirt-sleeve pouch, doctored purse, and a DIY sling, find a way to get the gun out of our hands but on our person.

Otherwise, the chances of having it and getting it into play when we need it are pretty grim. 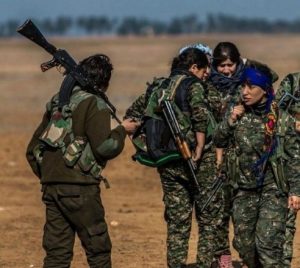 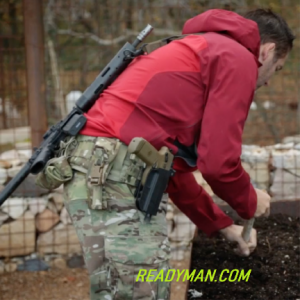 Get Off The Bench

Most of us need more work on unsupported shooting. Take a few braced or perfect-stance shots to develop and check zeros. Then shoot however you’ll most likely be firing that gun. If you can’t stand long, sit on the edge of a seat.

Absolutely be aware of opportunistic rests, lean against the vertical divider/post for that hunter’s shot, and develop/maintain knee-braced and – if you’re spry yet – prone stances (for pistol, too).

Just don’t practice like there will always be something to lean on.

Even in classes, most shooting time is spent upright and static. Since in both defensive and combat scenarios, we’re ideally hugging cover like a long-lost favorite lover, and not all cover lends itself to adults ranging 5’ flat to 6’6”-plus standing squarely upright, work around the restrictions.

Building muscle memory for the ideal shot is great. However, after achieving basic accuracy (hunting and DM work are the only time you need hits tighter than a dessert plate), start moving around. 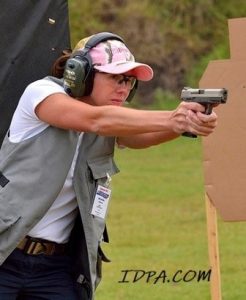 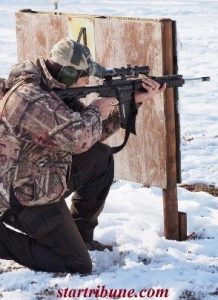 You can get away with side shuffles and a step or two forward and back at almost any gun range, and crouching at varying heights. Leaning around may look odd, but do it. Hunch (high enough to clear the bench), close your eyes, and open them as you bob up for a shot.

This one is ideal for off-range dry fire practice, but get in some live fire with typical carry gun(s), too.

Rifle and shotgun don’t have quite as much movement as pistols, but there’s some. We’re leaning to check areas, changing grip and position to open a door or pass, lowering our profile/protrusion if we’re slow-checking corners, using cover, etc. 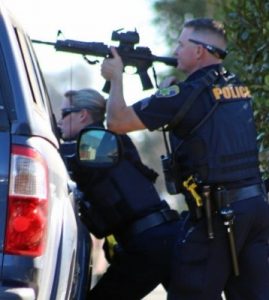 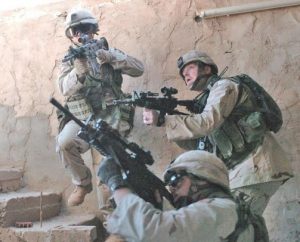 Our carry changes more still when we’re working with partners and teams.

Pistols are even more active. We’re still leaning all over finding exploitable windows or maximizing cover, we move the gun in and out, we go on and off the trigger, we tilt the gun. That puppy is almost never still – or, it shouldn’t be. 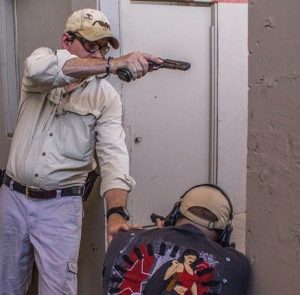 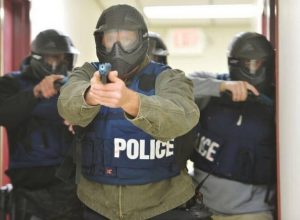 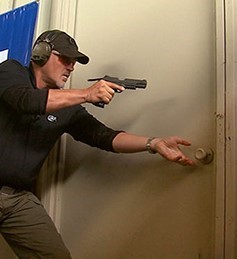 That’s something we can and should be working on in our usual spaces.

And, on the pistol-in-motion topic…

We typically see very few ready positions, but there’s plenty of reason to have others that are equally second nature.

The “safe” downrange location for pointing the gun changes. It’s not always the original target’s direction. Nor is it always down or up.

We also don’t always have two hands for it. 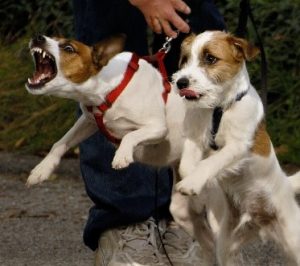 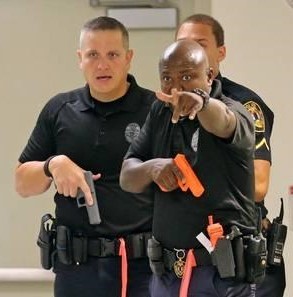 If we do have two hands, we may be giving directions or instructions to someone with the other, holding a child or animal reins/collar, dragging a victim clear, pausing to perform must-have lifesaving, unlocking or opening a door, sliding over something, or bracing a hand on something.

There are numerous circumstances when we’re not engaged just this instant but don’t want to holster or bag a firearm and don’t have anything that needs to die to point it at just now. Practice for those moments.

(Conditional readies are a good one for even just a mental exercise going through stores/workplaces/homes, too.)

…Particularly the act of immediately snugging a gun all the way up against your sternum for Search/Scan and Assess phases of an engagement. 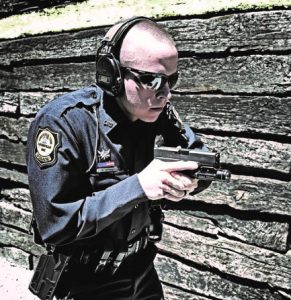 Scan and assess needs to be nigh-on constant and the act of deciding an engagement is over should be a multi-step process determined by the evolving circumstances, with a ready determined by that situation.

Neither should be trained as some one-size-fits-all habit.

Combat or defense, we stay aware so we can engage a target of higher priority if necessary. 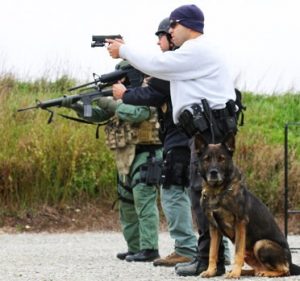 Combat or defense, when our target(s) are down and no longer a threat, that gun should remain at least mostly presented – off the trigger and tilting up-down as needed for non-targets in the area, but at an active, usable state of readiness that allows for discretionary fire.

Combat or defense, with some few exceptions, that gun should really be at least mostly moving with our head and eyes.

Depending on the circumstances, straight and level ahead of us or in the original direction of fire may not even still be the best place to point a gun, even immediately after engagement (household construction standards, other responders and bystanders, limited visibility in that direction). 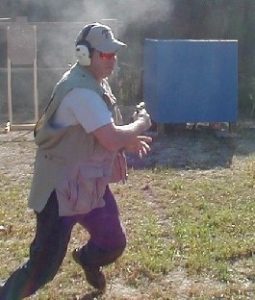 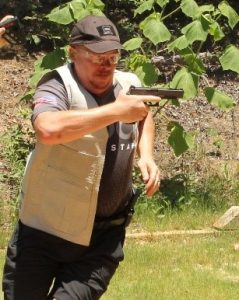 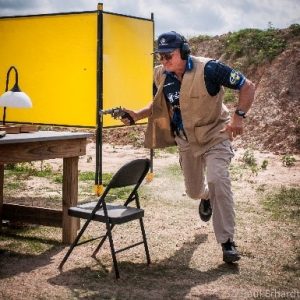 This is a problem at ranges where “safely downrange” only exists in one direction. That range-safety limitation may be the origin of so many people teaching it that way. Who knows.

Just be aware so you can practice practical responses at home, and mentally work it while out and about in public places. (Little hand motions at most, don’t tactical air-guitar your way through Walmart.)

While we’re talking about awareness…

Anytime we practice, and while we’re out and about, change your focal depth.

Our target is somewhere. Without even moving the eyes really, observe what’s between us and beyond it. Lift eyes, just a little left and right. Make sure nothing’s entering the frame. Depending on engagement scenarios, glance around. 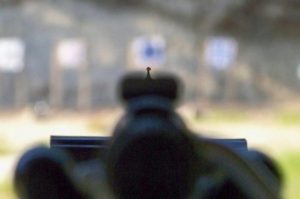 And when it comes to staying aware…

Really. It’s not only okay, it’s highly encouraged that you glance around as you maneuver. 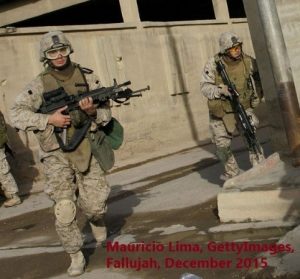 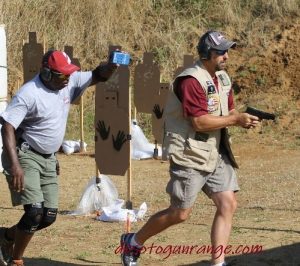 Ranges are usually fairly smooth concrete, gravel, clay, and mown fields. (Pretty sure it’s a big time insurance thing that your shooters not be tripping constantly.) In action sports, it’s non-shooting personnel’s responsibility to make sure they’re not in our way. In training, we usually have plenty of room between moving shooters.

So we learn to not look.

I can think of very few spots in my yard and very few sidewalks, streets, medians, and parking lots where there is nothing to trip over inside 3-10 yards. If things go sideways in a school, store, or some other venue, count on them turning into a minefield of hazards, to include people bouncing all over.

If I’m on the ground because I tripped, I am a static target (AKA: easier to hit).

My response capabilities are severely limited until I get up. If I hit hard enough or got run over, I may not be able to recover or respond at all.

If I do not get my finger clear or jerk a shot, I may take out a bystander or another responder. (Making the situation worse is a big time no-no).

So, for real, dude, especially when moving backwards, watch where you’re going. It only takes a glance. 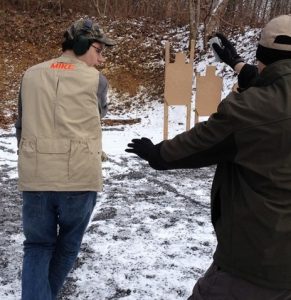 *Psst… That’s one of the exceptions to a gun staying pointed at the target instead of moving with the eyes.

Yes, we move a little differently in some situations. We can hunker and run if we’re exploiting cover. We might practice off-road or parkour-style running so we can catch ourselves if footing gives way. Some team tactics work best with smaller, non-extended steps, because staying tight is important up until that minute we fan.

And, yeah – I mean, if it has to be said – you hold onto your gun instead of fully swinging both arms.

Just go, move, as fast as possible. Again: Moving targets are harder to hit. The zippier you are, the better.

By no means should any of this suggest that I dislike shooting sports, square ranges, or classes as training aids. They’re vital. Training is the best investment a shooter can make. Ranges and sports allow relatively inexpensive maintenance and development.

Just be aware of the mindsets and habits that are sometimes instilled, and practice to prevent it from becoming a liability in the real world.

Try a little low light training exercise within your property, (with an unloaded firearm) set the alarm clock to go off in the early hours and act as if it is an intruder alarm that you are responding to and do not make any other extra preparations than is your normal go to bed routine. This should give you some indication of how prepared you really are in a worst case home invader scenario. And by the way do have another loaded firearm handy just in case the big guy in the sky wants to flex his sense of humour!

Max Stotto “Try a little low light training exercise within your property, (with an unloaded firearm)…” – >>Max, I also like the one where you decide the next delivery guy/mailman/service provider, etc. is a potential threat, and run through if/what needs to happen. (Not actually drawing on the person, but between the truck entering or bell/knock or dog alert, grab what you would need, mime the actions, and mime how you handle a potential of somebody who is maybe/maybe not legit offering the best version of church/tree maintenance, versus there-and-gone and where are they/were they actually alone or a diversion,… Read more »

R. Ann The Real trick to tactical training is not to go so far down the rabbit hole that you cannot find your way back out! Regards

Max Stotto “R. Ann The Real trick to tactical training is not to go so far down the rabbit hole that you cannot find your way back out! Regards” – >>The common trait of only training to TAKE shots when a gun comes out of a holster is actually why you see me so often mention coming off the trigger and working shoot-no shoot drills, and why I’m a huge proponent of having lights handy – with/on the gun and on sensors out in the yard. I’m lucky in that we can declare weeks where somewhere we’re going to call,… Read more »