Sprouts can be a great solution for preppers at all levels, as well as our animals. They can be had and done in a million and one ways, eliminate some of the climate issues we face in both hot and cold environments, require little space and little time, and are packed with nutrients. They also have some nice morale benefits, providing fresh green foods and sometimes even a crunch during times not much else will grow. 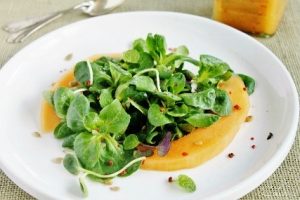 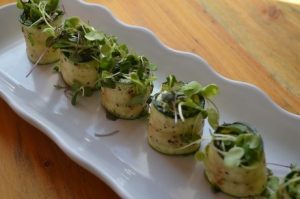 If you don’t like sprouts, give them a second try. Just trying one or a few and giving up on them is missing out.

Personally, I’m not big on alfalfa or the “moo mixes”. They taste like grass to me, and I don’t dig the texture.

Flip around to radish. I love it, but it’s typically some hot and spicy stuff. If you packed a sandwich or wrap with radish, a lot of people would be unhappy, but it’s great for finger-picking snacks playing cards and flavoring anything from sandwiches and salads to soups and stir fry. 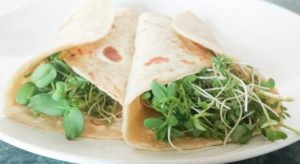 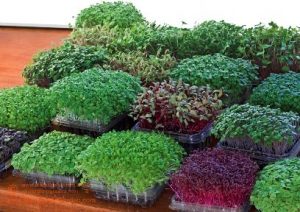 There’s a whole world to choose from, with a huge range of textures and flavors, from amaranth, brassicas and popcorn to pea shoots and sunflower.

Psst…Buy regular ol’ garden seed as often as possible – it’s the same stuff and will cost a lot less, especially while we’re in the sampling phase.

Once we’ve got them growing, we can use them in everything we would a lettuce or fresh vegetable – soups, stir fry, salads, sandwiches, stackers, omelets, and wraps. 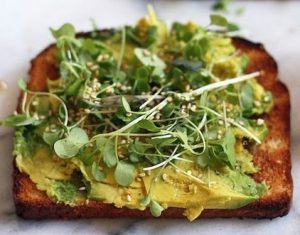 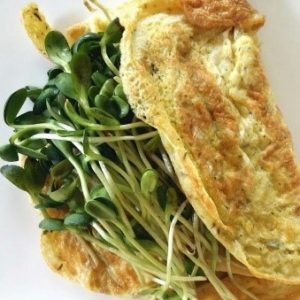 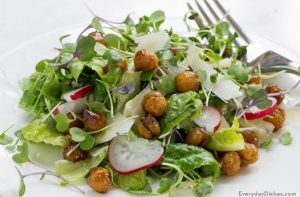 It’s never a good idea to eat one thing to excess, which is where a lot of problems come in with sprouts (and wild edibles). There are sprouts that pregnant women shouldn’t eat. Likewise, there are a few that will interact with preexisting medical conditions or herbal treatments. It’s not common or huge, but do a little research. 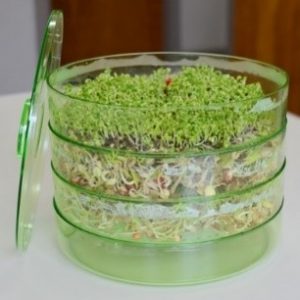 As sprouts gain in popularity, culinary and botanical definitions are shifting, and it can be painful to keep track of the stage being discussed.

Most people neither need to know nor care if there should be a scientifically or government determined dividing line between the plant category and what we call it when we’re eating its leaves. Given what consensus conventions have repeatedly done to Pluto, I’d rather we all just live in peace with our immature edible greenery. 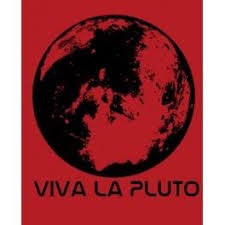 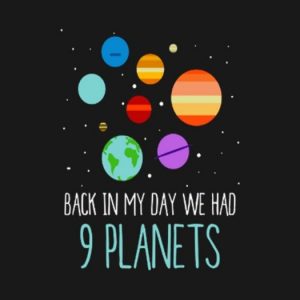 It’s not worth getting wrapped around the axle over. Many people and most specialists have foibles. I have my own knee-jerk at bullet-ammo and clip-mag mix-ups, and seeing an OP or heirloom seller proudly declare “Non-GMO!” like its particular OP or heirloom is special in that way, so I try to remember that some people care deeply about precise terms.

I’m using “sprouts” as an umbrella for the whole shebang anyway, cotyledons through baby leaves. Don’t be put out over it. 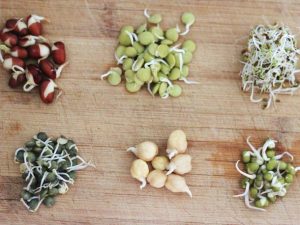 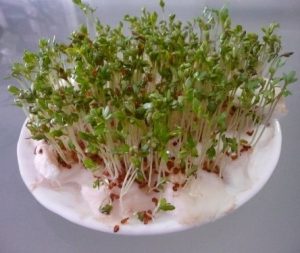 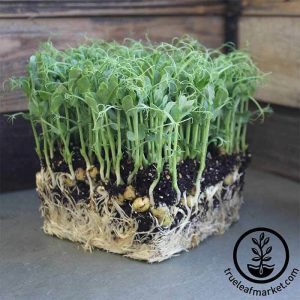 A major consideration for preppers, is that sprouts and microgreens are an absolute seed suck. We’re going to eat them long before they have a chance to make more seed for collection.

There’s a really incredible ratio between many sprouting seeds and their green yields, with anywhere from a teaspoon to a tablespoon capable of filling a jar or 8×8” to 12×12” square, but it’s something to be aware of.

That seed use is one of the reasons we – as preppers especially – want to get the most bang for the buck out of our sprouts. 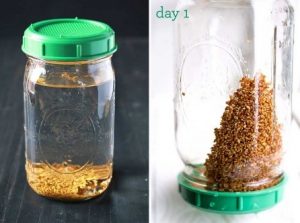 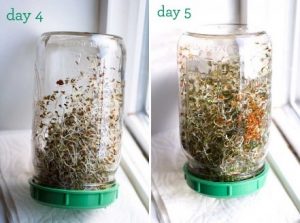 When we grow wheat for a couple of days and then cook it as soon as it has “tails” from the roots, that’s sprouted grain (which hugely increases feed value for us, birds, and small ruminants, and can be cooked as-is for cereals, soups and “rice” side dishes, or ground for flour). 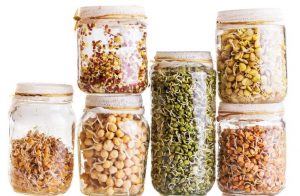 When we do sprouts in jars, that’s about the furthest stage we want to take them to. Leaves will start getting damaged (which leads to rot), and they’ll have more drainage problems if we let them go much longer.

Working in stackable trays we can grow a greater density for longer, due to the airflow.

Some types will grow to full-on baby leaves using just water and sunlight. Some may require a substrate of some kind to get there – paper towel, cloth towel, small pea gravel or aquarium stone that we keep lightly damp for them. Others will happily send roots through a mesh or grate into a drip-catch pan for the support and greater absorption they need.

Those can be a big boost for anyone with limited resources, whether it’s income or space now, or a prepper making the most out of their seed stash. It lets us get a lot more yield per seed and without added nutrients. 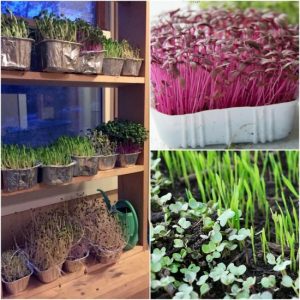 For others, we do need nutrients, and in some cases a soil or soil-substitute substrate. Sometimes, though, those nutrients can be as simple as sticking a used teabag or cheesecloth holding used coffee grounds in a gallon jug and using that for root-zone watering.

For the larger microgreens that need a little more help yet, I personally like good ol’ dirt, anywhere from a half-inch to an inch deep. 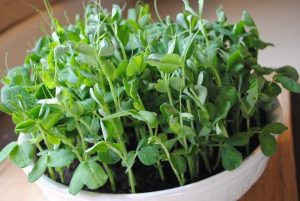 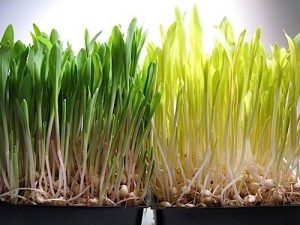 I’m not big into “needy” things, so I don’t always do sprouts the way others recommend.

I rinse jars 1-2x a day and angle them to drain. I sometimes use a gentle spray from a can or hose for bulk microgreens and sprouts, but for small amounts and delicate green sprouts at the cotyledon-leaf stage, I routinely just mist, and I routinely only water leafy sprouts once a day.

I also keep a damp cloth over my tray-grown sprouts if they’re in the house or arid conditions, with the lids over those, or I use clear “greenhouse” lids to help hold moisture. 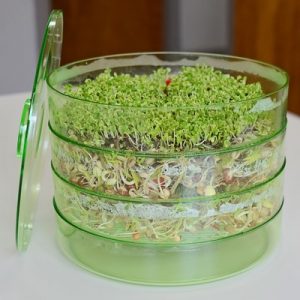 In really humid conditions, I go with only the draped cloth so excess moisture can evaporate at will.

Especially small-scale, it’s a little like finding a sweet spot for sourdough starter. Where they are exactly on a counter changes their airflow and temperature. How densely we plant and how big we want our sprouts and microgreens will also affect how much attention they need and which methods work best. 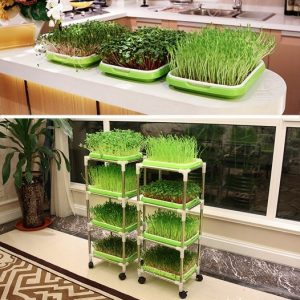 We don’t need specialty jars or lids. We can poke tons of holes in a peanut butter tub or cover any ol’ jar with a sock, torn shirt, or garden mesh.

I do still use my original Sproutmaster trays at home. I gave up on the divider early on and went to a paper towel liner, but they’re way sturdier than I expected when I first unwrapped mine and they’re handy enough, stack well enough with thin dish towels between the tray and lids.

(DO NOT believe that the mini’s —or the jar versions – will work for packing. It requires rubber bands, bungees, and it either ends up not draining or you end with drips.) 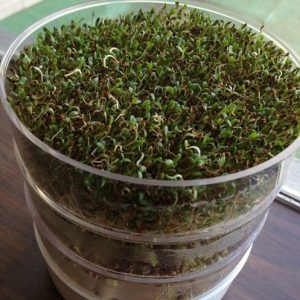 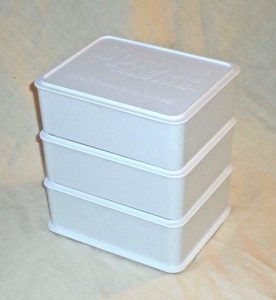 When I expanded, I didn’t buy more. It’s too easy to wrap a dish towel or storm mesh around a baker’s drying rack if I want improved drainage and airflow, or line anything from a lasagna pan to a 1020 tray with the same, a paper towel, or soil, or just arrange a tilted bracer and put in drainage holes above seed height on one end.

It works, whether giving them gentle sprays or mists, dunking the whole tray real quick, or approximating a flood-drain hydroponics or aquaponics system where we pour on one side and let it trickle across and drain.

Just like sprouts offer us condensed nutrients and nice, fresh, and even crunchy foods to augment our diets, sprouted fodder has a ton of benefits for livestock – https://www.motherearthnews.com/homesteading-and-livestock/sprouted-fodder.

Basically, it’s growing seed grains (and rarely beans) to the stage right before they develop true leaves, usually 7-9-12 days. It needs nothing more than water and some light in the last 3-5 days, and typically boosts proteins, minerals, and vitamins by 2-4 times as well as increasing the digestibility of the seed. Even non-grazing game birds like ducks can be fed sprouted fodder. 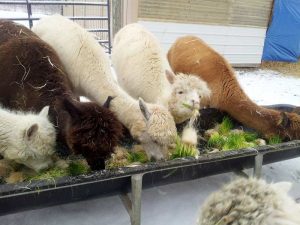 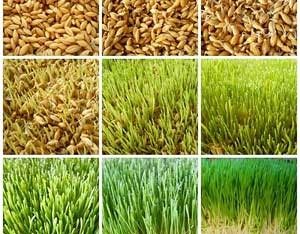 It, too, is a seed suck – but it has the same seed-to-mass conversion as human sprouts, too, 4-8 x the mass. And, remember, that mass is pound-for-pound 2-4x “better” in the common focus areas in livestock feed, as well as being more filling and covering more of the daily fiber/dry matter needs

The way some people grow, it’s also water needy. That can be reduced by reusing water from sprouted fodder in gardens, for larger livestock, and through the fodder system again after some base physical filtration (due to residues, it’s still going to need replacement after a few passes). 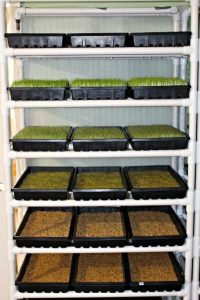 I have the best luck going with thin layers, not the “less than a half-inch thick” that others are able to make work. I tend to aim for 3-4 layers of seed in depth.

I also sprout more than barley, wheat and oats in my mats, everything from native pasture grasses and common hay seed mixes to millet, pigeon and partridge peas, vetch, and cow beans. As with fresh feeds, the latter get fed in much lower density due to richness, but I find it to be a nice boost.

I’ll also do mats of stockpiled bulk seed like forage turnips and beets when germination on those start to get lower than I prefer. 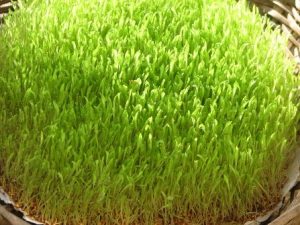 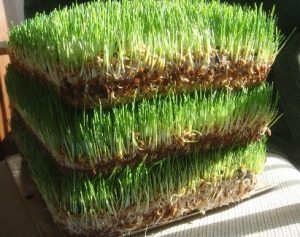 For some additional sprouted fodder information and setup ideas, check out:

I wouldn’t try to grow enough to truly feed livestock, especially large livestock, but even small amounts can see big boosts in production and health. (So can 2-4 day sprouting grains and beans, instead of feeding that grain dry or just-soaked.) 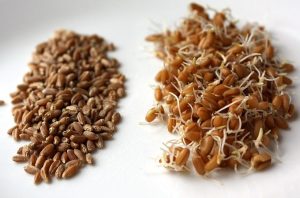 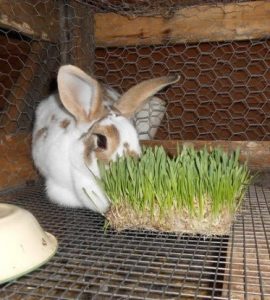 Sprouts can check a lot of boxes for us and our livestock. We have to plan for the high seed use and additional drain on water supply, but it gives us an option for fresh foods and healthier foods even in very small spaces and commonly even without light.

Even if we’ve had some bad sprout experiences before, it’s worth giving them another go, from sprouted grains to microgreens and fodder mats.

“ Psst…Buy regular ol’ garden seed as often as possible – it’s the same stuff and will cost a lot less, especially while we’re in the sampling phase.”

Are SOME GARDEN SEED COATED WITH FUNGICIDE!
Should you include a warning NOT TO USE SUCH SEEDS
FOR SPROUTING?