As preppers we are always planning, sowing, like the ants as opposed to the grasshoppers of urban lore. And having grown up in the formerly golden state of California my life experiences always draw me back to her history, which I became interested in while hunting and skiing in the Eastern Sierra’s. A place of magnificent beauty and raw history 5 hours by car from the sprawling metropolis of Los Angeles, really 50+ towns piled together looking for a unifying identity (still.)

And her most famous story of the failure not so much to prepare as to know what your are getting into is a lesson to us all, one that eighty one (81) very hardy souls paid for dearly.

Westward Ho! For Oregon and California!

Who wants to go to California without costing them anything? As many as eight young men, of good character, who can drive an ox team, will be accommodated by gentlemen who will leave this vicinity about the first of April. Come boys! You can have as much land as you want without costing you anything. The government of California gives large tracts of lands to persons who have to move there. The first suitable persons to apply, will be engaged.   G. Donner and Others.

From an advertisement placed by George Donner – Springfield, Illinois – March 18, 1846 – one year, almost to the day, before he died in Alder Creek Valley California. 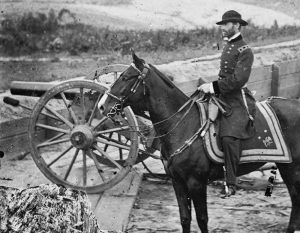 Four years before the discovery of GOLD in those hills, actually mountains reaching above 14,400′. Union General William Tucemseh Sherman, pictured above, was the American military attache to California’s during its transition to statehood, and was a surveyor and explorer there in the 1850’s.

John Muir, the founder of the Sierra Club, wrote the following – a transcription (due to the physical condition of the original letter) on the matter from the University of the Pacific’s collection:

A Martinez, Cal., November 19, 1910. Dear Madam:- Here is a sketch of the fate of the Donner Party. The Donner party of immigrants bound for California was organized in Illinois. It consisted of about eighty persons nearly equally divided between males and females and including a number of children. About a month was lost by taking a new road around the south end of Salt Lake instead of the usual route around the north end. Therefore owing to this delay the party did not arrive at the foot of the west flank of the Sierra until October 31st, 1846, when the snow commenced to fall, and their provisions began to fail. They attempted to cross but by the time they reached Donner Lake just below the summit of the range they were stopped by the deep snow and built cabins and tried to pass the winter there. In a few weeks starvation stared them in the face. Fifteen of the strongest started for Sutter’s Fort for help. Suffered terribly. Distance ninety miles in a straight line. After all had died on the way except four or five one of them staggered to the Johnson’s ranch and supplies were forwarded to the three or four survivors;- these had eaten the dead as they fell. The news spread to Sutter’s Fort and San Francisco. Captain Sutter promptly sent men and mules with provisions. San Francisco raised fifteen hundred dollars and several other relief parties were sent out. 05907

He was a critic of the Donner Party, wrote that they should have survived, there was plentiful game in the area, all the materials needed to trap, to construct adequate shelter, firewood, make snowshoes for hunting parties to venture out across the snow, an abundance of fresh water, and fish to be had under the ice of Donner Lake.

As preppers we should take three lessons from this, one, yes he was an early version of an arm-chair quarterback, he was eight (8) years old in 1846, and two, like others, he suggested that the decision to take the 300 mile shorter southern route around the Great Salt Lake actually delayed the party and third they should have not attempted a crossing of the mountains that late in the fall. They should have wintered on the eastern slopes of the Sierra Nevada’s before attempting the mountain crossing. He also speculated that the fifteen (15) strongest were in reality the ones who could best trap and hunt and save the camp and give it its best hope to survive the winter. 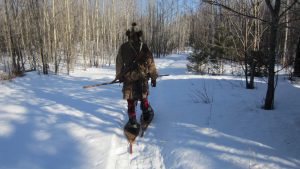 We all make decisions but not always based on what is smart or safe or prudent and they can mean life or death in certain circumstances.

John Muir’s was a true mountain man, a defender of wild places, hunter and mountaineer. He wintered alone in the Yosemite Valley as well as the Hetch Hechy Valley , since dammed and San Francisco’s main fresh water reservoir.