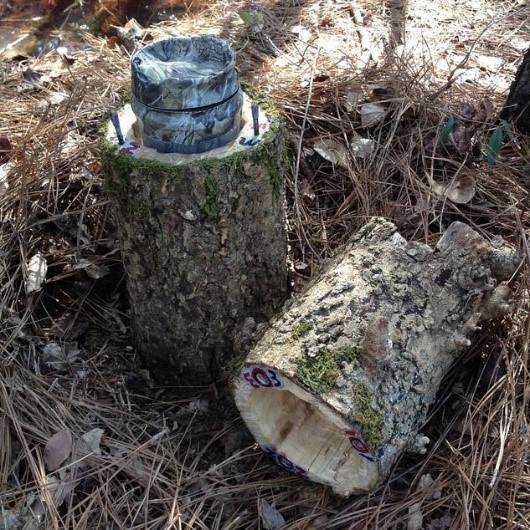 Having a cache isn’t a bad idea for all sorts of reasons. Even if we don’t plan to bug out anywhere, we can easily be cut off from our homes and vehicles by everyday events: traffic accidents, evacuations due to spills and contamination’s, house fires, flooding dams and water mains, damaged bridges, vehicle malfunctions. Having a cache we don’t need a shovel to access – or a cache for the e-tools to get into our buried treasures – can be priceless.

Even Reader’s Digest has covered ways to hide valuables, and there are a million and one prepper and survivalist videos and articles for other ideas. Geocaching has some good ones, too.

Here I’m mostly going to focus on stuff I don’t see suggested often or ever. Many have some size restrictions, but many are also applicable for both permanent residences and “other” locations – unused residential areas, off-site storage units, back country wilds, backwoods dump sites, and undeveloped property. They’re also largely hiding in plain sight, which limits how much attention we draw erecting and accessing them. 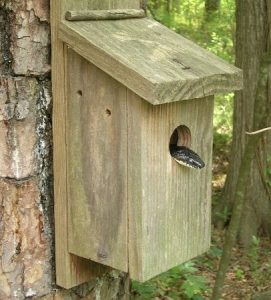 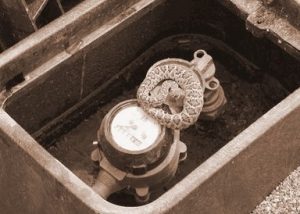 One, Many good cache locations become good hidey holes for critters, too. Hornets and wasps are one level of bad. Rodents are bad enough when cornered, too.

I grew up in the Deep South, then served in Asia and the Southwest. It is second nature not to stick my paw into dark spaces, to tap before poking/lifting, and to use something that gives me at least 8-12” of extra reach when popping covers off anything, and to look really well before entering crawlspaces or areas where there’s conduit overhead.

See, snakes especially but sometimes spiders get really cranky about being intruded upon. It does not take a venomous bite to put you in the hospital – even the “safe” cuties have filthy mouths. 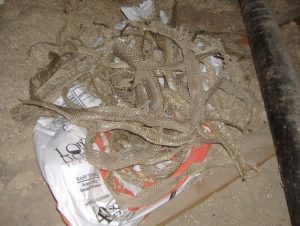 Two, Surface caches are vulnerable to wind, water, and temperature fluctuations. That limits what we’ll want to store in them, although not significantly versus a buried cache that’s less than 3-5’ deep.

Three, Any physical location we do not personally own and maintain is vulnerable. Remote wilds to the few remaining lockers at a bus/train terminal, stuff changes. Residential and commercial properties evolve as well.

Trees get cut and fall, and waterways ebb and flow, consuming or exposing our stuff. New owners take over and renovate. The state entity that owns something decides to put in a path, allow hunting, or permits a clean-up group. Condemned buildings get demolished. 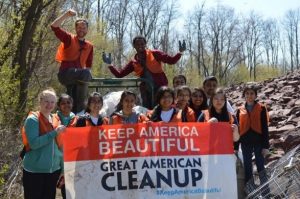 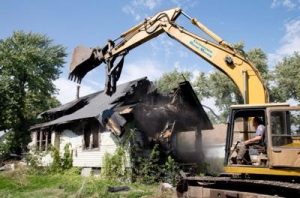 Power line cuts tend to be pretty standard, but sometimes the contracts/contractors get extra froggy, sometimes cuts go to buried lines, sometimes private-held lines get rerouted and cuts are abandoned to turn into tangles, and sometimes somebody pours a slab over our goodies while they’re building a substation or cell tower.

And, just like our houses, there’s a fire risk pretty much everywhere.

Other options for caches like storage buildings, parking space rentals for passenger vehicles or off-season boats and motorcycle trailers, public parks, off-season RV lots, half-built and then abandoned commercial and residential construction sites, empty houses both long-abandoned death traps or longtime empty for-sale lots, and empty strip malls, gas stations, restaurants, and car washes have some benefits for preppers looking for a cache spot, but they also have additional drawbacks. 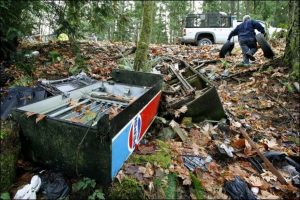 Remember, I suggest cruising curbside pickups and dumping sites for goodies that can be re-purposed. I learned this from others, to include modern hobo types. Squatters and homeless may poke through locations, or various ages and threat levels of hoodlums make use of a spot.

All above-ground caches have some vulnerability since there’s less time and effort involved with getting to them. Getting creative can help reduce the risks. 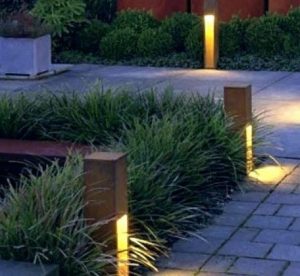 Fence posts and posts for our backyard lights and birdhouses have girth restrictions, but sizable timbers can be used and hollowed out like tree stumps to hold long cylinders or daisy-chained small packages, much the way we’d bury PVC or erect fake conduit for some supplies. Short posts especially can serve as a cap for something we’ve recessed in the surface soil. 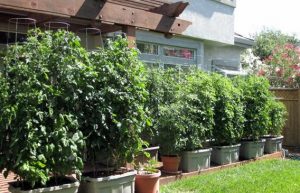 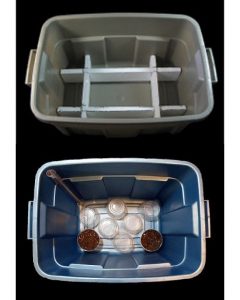 Garden planters that involve nesting storage totes or buckets inside each other typically call for a sturdy spacer. That gives us a whole lot more room to play with than the typical potted-plant “safe”.

It’ll be heavy in planting season, but we can still be getting a good 6-10” of growing depth, keep decent reservoir capacity, and gain pretty easy access for a backyard stash, but one that’s heavier and messier than most would go through on the offhand chance of a score. 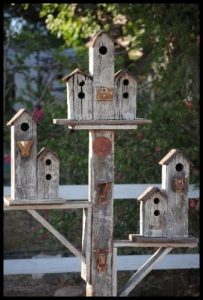 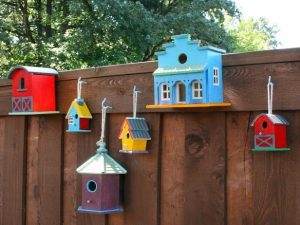 This one is especially applicable to “other” properties as well as our own, and one of the most versatile options for sizes. We can either custom-build birdhouses so there are bare recesses instead of actual holes to deny critter access, or just fill standard birdhouses. If we’re using a post, that can become storage as well.

Standard bluebird houses can hold a peanut butter tub, pasta jar or in some cases even a coffee tub or ammo can, or we can get creative with arranging smaller and oddball-sized houses that would be appropriate for small, individual songbird nests or the many, many decorative birdhouses out there today. 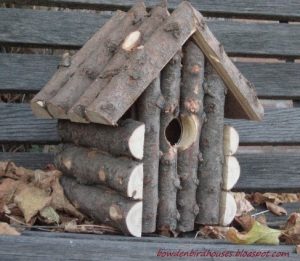 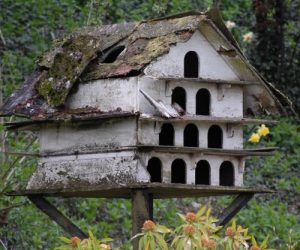 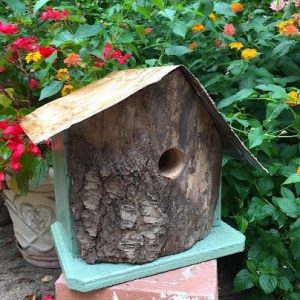 It’s slow and painful, but even if all we have are standard drill bits and a hand saw, we can hollow out small logs to make a variety of sizes and depths to cluster around porches, hang from fences, and stick up on posts without buying/salvaging lumber or other birdhouses. Or, use split smaller-yet limbs for construction with simple glues or nails.

We can easily distress those items and add them to the yards of empty houses or the dump sites that develop around back roads and abandoned commercial buildings. Don’t hang them – they’ll be less inviting if they’re lying on the ground like something that wasn’t worth keeping. 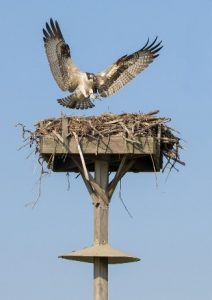 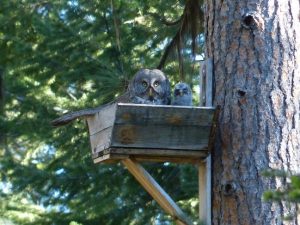 Most areas have programs ranging from PETA types through Ducks Unlimited’s hunters to help provide safe nesting for ducks, pelicans, cormorants, and raptors. Many are encouraged for homeowners and uber-organic farmers, and putting up bat houses is even more popular for the backyard crowds.

That helps this one apply to even more locations, especially if we print and laminate small 2”x4”-3”x5” placards to label our creations “[fill-in-the-blank bird] Conservation – Visit [eco-freak/hunter/DNR website] to learn more about native wildlife”.

Those big ol’ birdhouses give us a lot of room to play with. 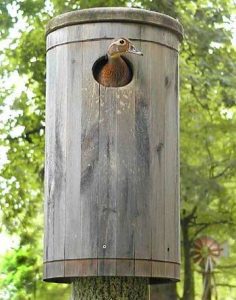 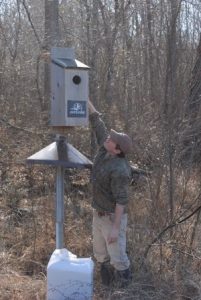 Raptor platforms and boxes can be filled with larger flat objects and have nests built up on them, leaving room for actual birds or not.

Same goes for the bucket-sized wood duck and merganser boxes – we can put in a barrier just below the hole so they pop in and pop right back out, or we can just stuff our ammo can, toolbox or lunchbox into the bottom, leaving room for the critters to use it until we need our glove-stuffed boots, rain gear, e-tool, or spade and knife set.

They also commonly need big ol’ sturdy supports, so we can make use of a stump or invest in larger-diameter pipe or 6×6-8×8” timbers (or build what looks like them out of 1 x what-evers) to give us more storage room yet.

If we hang flush to a tree instead, we can carve out a hollow behind the birdhouse or bat house to use as well or instead. 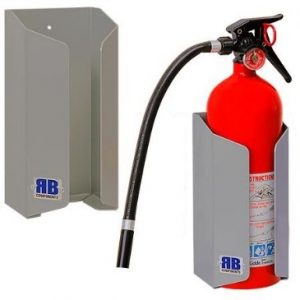 I wouldn’t leave a fake extinguisher anywhere somebody might grab it, but the brackets are sometimes so obvious in what they are, it would work for inside abandoned properties or if we can distress a fake, pull the safety and bleed off the gauge, they, too, would add space, especially at dump sites and even inside foreclosure/abandoned buildings. 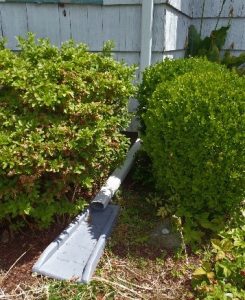 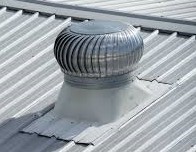 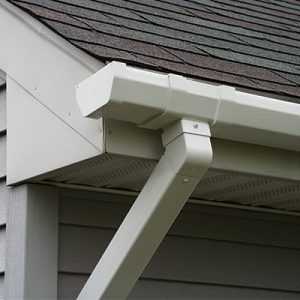 Sticking up a downspout that isn’t actually connected to a gutter is a fast, easy way to gain a bit of outdoor storage space. Adding a covered gutter is a bit pricier, but can also pay off due to the size and more importantly the length and ease of access for later.

I would 100% not climb the roof of a property I’m not sure about. However, at ours and if it’s accessible from a ladder I can slide in, studded rooftops are far from uncommon – and those are common sites for leaks, which calls for a repairman or inspector who won’t generate too much interest. 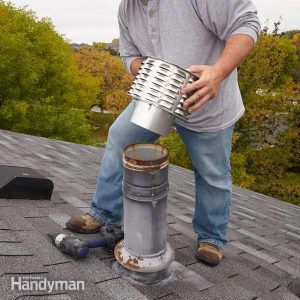 They let us custom-size relatively inexpensive and salvaged materials to hold anything we’d bury in an ammo box or PVC tube, although we have to be cognizant of just how hot rooftops can get and make sure it’s secure against winds and any ice/snow loads we face.

*DO NOT buy a real vent stack. Salvage or get crafty. 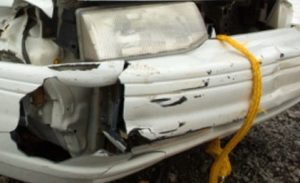 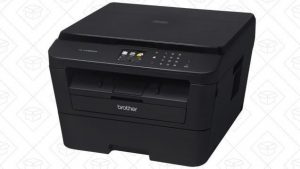 Another that applies to pretty much anywhere, to include dump sites and really trashed abandoned yards and houses, as well as storage lockers and somewhere out of sight on our own properties, are old “junk” that has a fair bit of empty space inside.

We just want to make sure they are appropriately distressed with enough frayed electrical cords and cracked faces to avoid appealing to thieves and scrap salvagers.

I discovered just how roomy the rear interior of both a stove and washer are when a songbird flew in the house and repeatedly disappeared inside appliances. (No, I did not indulge my giggling father and turn them on – I did give some thought to buying a ferret.) 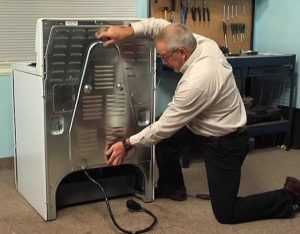 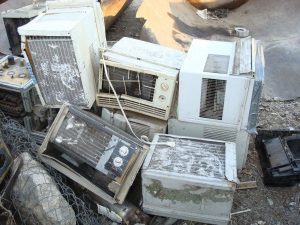 Once gutted, many window AC units and some RV rooftop units will rival a storage tote or bucket for storage space.

We don’t even need tools if we can lay our hands on an already-dinged-up bumper to semi-submerge in the earth (dissuading others from flipping it over and finding our machete, shovel, probe bar, hatchet, etc.). Printers also come ready-made with a frustrating array of pockets and access points.

The possibilities are pretty endless. 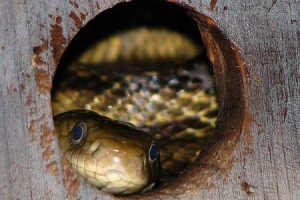 There are a whole host of options for increasing our off-site squirrel hoards – or stashing tools we need to access buried caches – but we do have to give some thought to what we stash due to size and the chances of loss and damage, and to the possible risks we’ll face accessing them before, during and after disasters.

And, for-real, don’t forget to sniff, listen, and watch for snakes, especially in spaces and weather that leave them no choice but to strike if somebody gets too close. And, if you do like digging holes…..

There are a whole host of options for increasing our off-site squirrel hoards – or stashing tools we need to access buried caches – but we do have to give some thought to what we stash due to size and the chances of loss and damage, and to the possible risks we’ll face accessing them before, during and after disasters.