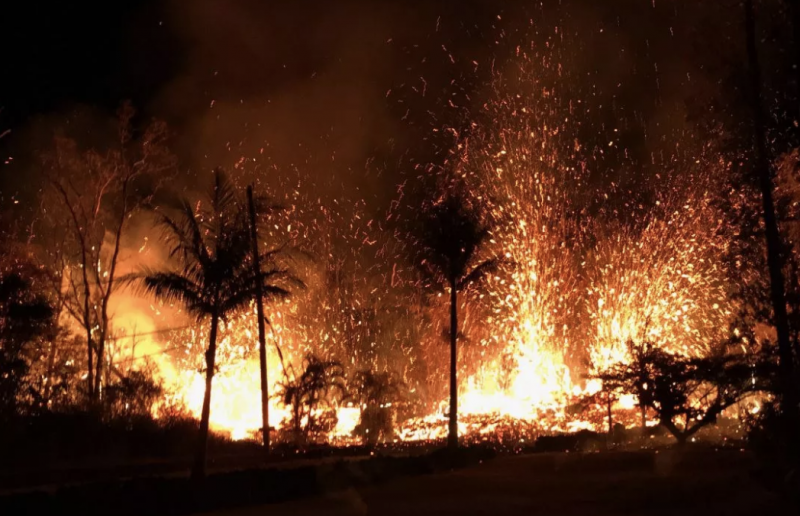 This is a disturbing video from this year, in fact this week, in fact yesterday! Well, not really, it is just labeled that way on the internet. It is six (6) months old. The volcano has quieted down enough to where it is no longer news, certainly not as important as what any B-list celebrity tweeted over the past few days on any of a variety of topics. But there are lessons to be learned here still.

While we refer to all the islands in the area as “Hawai’i” the Big Island is the one named Hawai’i. And like anywhere else natural forces directly affect market value and on the Big Island of Hawai’i, my personal favorite, that was happening in spectacular fashion, but again pushed to the back pages or off the news completely by the Media. But for the areas residents I would guess it is still central in their daily lives.

As Preppers we know that there are someplace you simply don’t “settle down” in. The base of a volcano ranks high on my list of those places, especially that of the largest and the most active volcano in the world, one that has been in a sustained eruption since 1986. BTW, other places on my list, the Korean DMZ (though progress is being made there), above base Camp 1 on Mt. Everest, the Israeli border with any other country, within sight of a levee in Louisiana, and most Southwestern border towns. It is my list, though I did mistakenly buy a house once that was about 5 miles downwind from a dairy farm.

Having been to Hawai’i I can attest to the fact that the area is lush, secluded, a true slice of the Hawaiian dream of living on the edge. Spectacular black sand beaches (broken down lava), a blue (deep) ocean expanse that goes on forever, definitely a candidate for “living off the end of the earth” in paradise. But there is no place in the area where you can’t see that giant cone unless you are deep in the ground cover, and the constantly rising steam from the caldera and the lava tubes flowing into the ocean produce a rain/mist that is almost constant.

Kilauea is classified as a “shield” volcano; below are the other four volcanoes that comprise the Big Island of Hawai’i (all the islands of Hawai’i were formed by volcanoes.) The volcano’s are Mauna Kea (MK), Mauna Loa (ML), Hualalai (H), and Kohala (K). These are the largest volcanoes on Earth, though Kilauea is the only one still considered active. 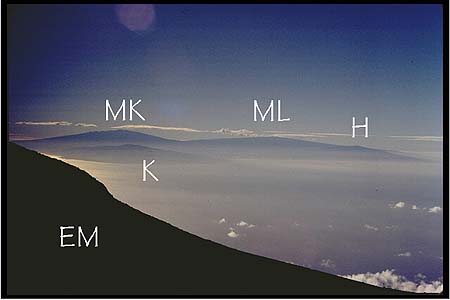 This is truly a place where the earths development and formation can be seen and studied up close, too up close for dozens of citizens to date. And, in case you didn’t know, a new island, Loihi, is building just off the southeast shore of the Big Island. Since it is still 3,000 ft below the ocean surface currently and not expected to break the surface for at least another 10,000 years, none of us need add a visit to it on our next vacation.

If you have followed this over the past 8 months you will notice that, unlike the movies, there are no firemen or fire engines fighting the lava, and for the simple reason that no man-made power on earth is effective against it. 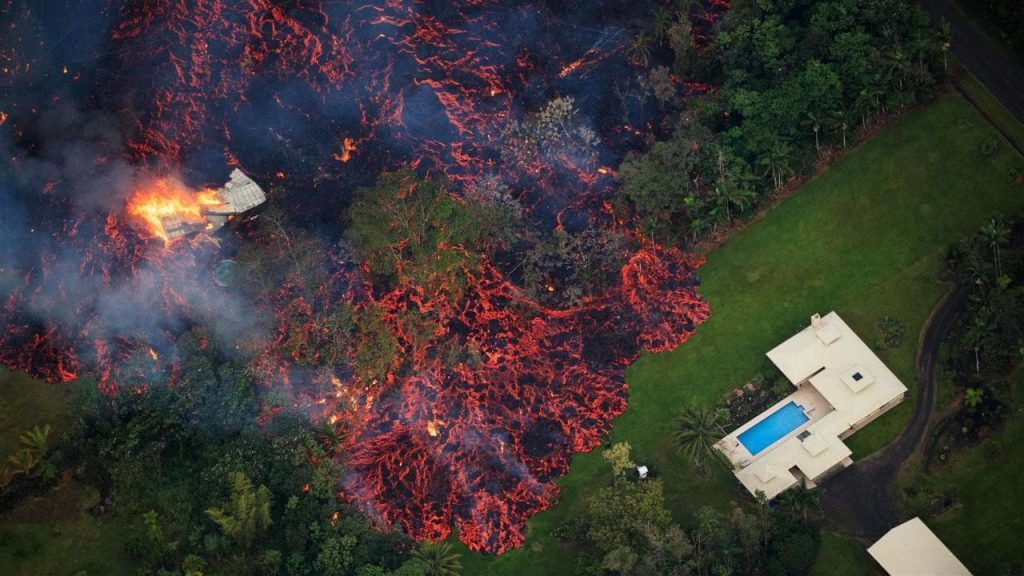 While we all know paper burns at 451° Fahrenheit (F), thank you Ray Bradbury, an open flame from a lighter can be as high as 4,074°F (though butane actually burns at 3,578°F) most magmas are in the range of 1,300 °F to 2,400 °F. So even concrete barriers will fail as concrete cannot withstand exposure to 1,300°F without undergoing severe strength loss and cracking due to spalling (any moisture within will boil at just 212°F.)

But this isn’t about the poor timing or choices of the people who chose to make their homes in Pahoa, HI, but about the destructive natures of volcanoes and the realization that once you make some mistakes, preparing for the inevitable is a really big challenge. It is life on the edge because no one knows when it will erupt next or the severity of the eruption, to include the speed and volume of both the magma and the pyroclastic flow.

So in this case Mother Nature holds all the cards and while others and government services will try and aid, your survival really is your responsibility. None of the roads destroyed are ever rebuilt, the same with the structures and any infrastructure (utility services, water lines, etc.) on (or under) the now cooled lava fields.  Perhaps a new cell tower was erected or power lines rerouted, but they too are now as exposed as everything else to Mother Natures future whims. So in disasters like these your “never coming home again bag” is your BOB and your EDC all rolled into one. (Though I am sure someone sometime used whatever monies they had left after being burned out to get a different slice of paradise in the same area, again with Mother Nature as the landlord with no clause as to when you will be evicted and the new property reclaimed, by fire.) 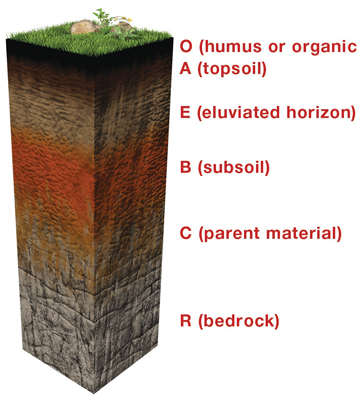 Your bug-out vehicle here also has to be always ready to go, always, and your escape routes (plural) have to be known and constantly updated as stress cracks like you see in the video can be more than a few inches wide in an instance, and your only indicator that this has happened is that shaking you may have felt a few minutes or hours ago, or that you didn’t feel due to the soils composition as tremors in the range of 3.8 or less on the Richter scale will most likely go unnoticed in an area with no multi-story buildings and trees constantly swaying in the trade winds.

Most will draw the conclusion that since it is no longer making headlines that it is all good, back to the normal rhythm of life in paradise, at this one end of the earth. The lesson here is that the normal rhythm here is abnormal by most standards, and requires constant planning, preparation and analysis of the situation 24/7/365. Having a little too much Hawaiian Punch on New Years Eve could have been a problem had Mother Nature not slept through it. A lesson here for all preppers. that there are places where the Cavalry is not coming to save you and yours.

Science in this area, as it pertains to warnings and predictions, is constantly improving but always seems to be few paces behind, or is it? Is it science or is it lawyers and insurance companies and real estate companies and developers and their threat of litigation in lock-step with government regulations/controls/laws that keeps the employees of a private, state or government institution from stepping up and issuing timely warnings? Timely being the key word here. Does all of the above delay the accomplishments of science? Review, rewording, review by legal counsel, final drafts, approval chains almost at infinitium, infected with politicians at every link.

Can we discount the possible litigation stemming from a false warning? Property values impacted, people displaced, shelters set up, local businesses shuttered for days at a time and on and on? As preppers we know about all of these and they are a part of the things that make a lot of us prep. Hawaii’s Volcano’s National Park is unique in all the world, a great place to visit, a great place to learn from the locals, in spite of the fact that it is currently shut down over politics. My guess is Mother Nature doesn’t care.