Lessons from History: Death By Paper-cuts 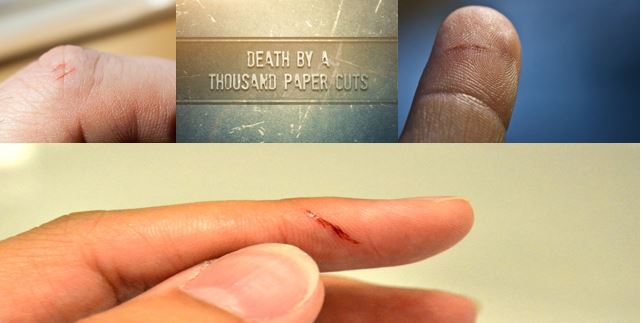 We’ve probably heard the phrase “bleeding to death from paper cuts”. It applies in all areas of our lives, in all sorts of ways. Politics, financial footing, personal health and fitness, madmen loosed on the public, even our relationships and jobs can provide ample evidence of disasters, individual or widespread, big or small, that we can backtrack to paper cuts.

Especially in personal and small-group disasters, there’s usually a cascade of failures or mounting hiccups – each with a reaction – that wind up forcing a choice between bad options. They’re the first few stones of an avalanche, the flakes that stick and eventually snowball. 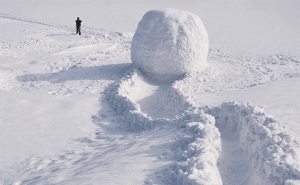 We can’t avoid the paper cuts in life. They happen. Preparedness tangibles help mitigate them, but continual in-situ decisions factor hugely – usually long before we hit that crisis point.

Many of the failures aren’t even directly on us. Regularly, they’re some link in a chain we were depending on. That link can be anything.

The decision of a judge in another state or failure to properly file paperwork puts a madman next door, at a concert, in our office. A drunk driver puts a breadwinner or family member in a hospital, a long-term rehab, and a wheelchair or prosthetic. A bug bite leads to a lifetime illness with recurring limitations and needs. 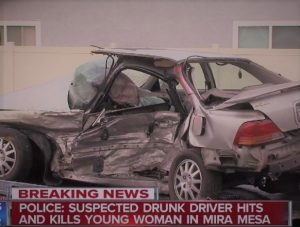 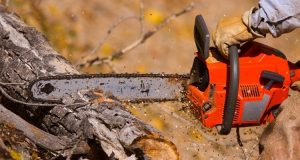 People step in a tiny divot and hyper-extend a knee. Chainsaws hit an 8” spike completely engulfed by a tree. Well-serviced vehicles have a chip go faulty or spring a leak at the base of the coolant reservoir.

It’s readiness for and the reactions to paper cuts that makes the difference between something that truly only needs a Band-Aid, and losing an appendage to gangrene, or succumbing to systemic infection.

In unsupported conditions – wilderness adventures, ocean-going activities, every-year natural disasters, and definitely a widespread disaster of any level that reduces our ability to seek or receive outside aid and supplies – it only takes a few paper cuts to break us or bleed us dry.

We have to be able to accurately assess to make those preparations and react correctly. That applies especially to the disasters that unfold by inches and increments. 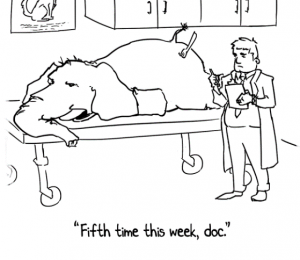 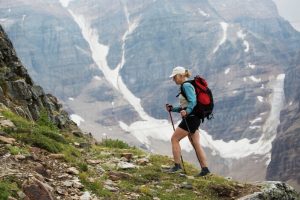 One Bite At A Time

Perseverance is an excellent trait.  Eating the elephant one bite at a time is the only way to get it done, and, yeah, to climb a mountain you do absolutely take one step, many times.

However, pain is the body’s way of saying something’s wrong, and elephant-sized gluttony is going to lead to a bellyache … possibly a big one with further complications.

In many situations, gutting it out is the only way to succeed or survive. We forget sometimes, though, that we don’t always have to finish the elephant – or at least not right now.

We see the “trudge on” and “keep going, make do, you’ll make it” mentality all over: military members humping a ruck, adventure athletes crossing a desert or ocean, a laborer swinging a hammer or filling a can and walking it where it needs to go, fishermen grinding through hauling lines and nets and pots. 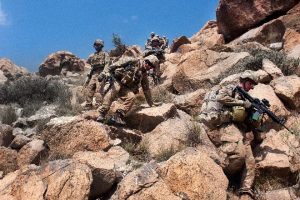 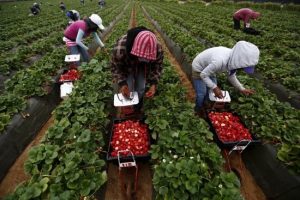 Sometimes, though, we get tunnel vision. Sometimes it’s not better to drop our heads and keep pushing forward.

Sometimes, we’d be far better off if we stop even just for a bit, let it simmer or clear our heads, look around for alternatives, and really accurately weigh the pro-con’s and risks-rewards. That’s where applying good judgement comes in.

Because sometimes, pushing through for another step, and another, gets people into trouble. 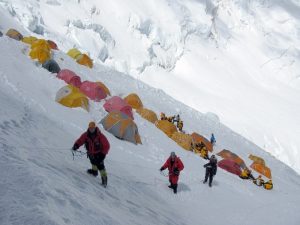 History is full of people who ignored paper cuts, made a series of small bad decisions, and found themselves in a world of hurt. It happens in all kinds of disasters, big and small, military and civilian, city to back country, recreationally and professionally.

Sometimes all it costs us is time and labor.

Aron Ralston spent five days trapped and a sixth cutting his own arm off and walking out after a climbing accident left him pinned with limited food and water.

Tough-as-hell guy. We call him a hero.

His boneheaded mistakes from well before that rock fell ought to be getting the limelight as a warning to others. 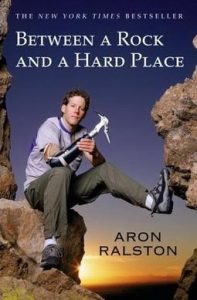 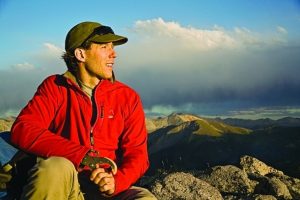 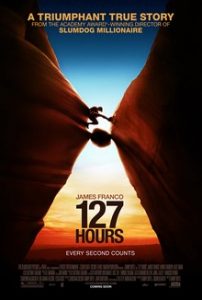 A couple of simple, common precautions could have changed everything. No book, no movie, no fame, but he’d have saved his family and searchers 3-4 days of worry, stress, and risk, and might still have both hands.

The mountains and seas are well known for their lack of mercy and the speed of the weather, yet they’re still the backdrops for tragedies. The elements are the sexy enemy, but regularly, it’s the “it won’t be so bad” and “we can work around that” attitudes that take lives after a series of those decisions to risk it.

The 1996 Everest tragedy and the Mount Hood disaster ten years prior share a lot of factors, like a killer mountain, challenge conquerors, and a storm that moved faster than expected, although the specific paper cuts differed. 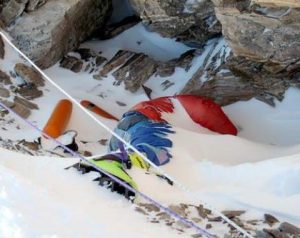 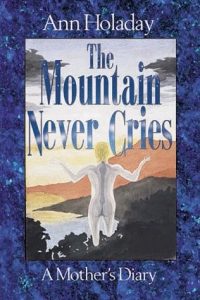 In both cases, there were also mindsets with a specific leader that can be added to the list of ignored warning signs. (It’s always easier to see things in hindsight, but others’ state of mind needs to be on our watch lists.)

Failure to err on the side of caution, the don’t-quit mentality, and on that school trip especially, misguided loyalty and reluctance to countermand the leadership eventually put most of the group in a position where there were no good options left.

A lot of them died because of it.

British Lt. Col. Henry Worsley successfully completed team treks in Antarctica, and went back hoping to be the first to reach the South Pole solo and unaided (toting everything, alone; no teammates, no dogs, no caches, no airdrops). 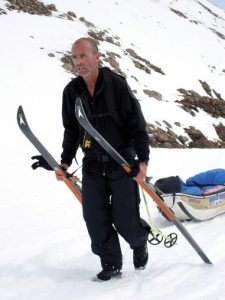 He ran into trouble, kept pushing, ran into more, and finally called for help. He was air evac’d, but it was too late.

Worsley didn’t die of systemic infection from abdominal peritonitis. He died of overambitious persistence. Later, a friend of Worsley’s attempting to complete his task called for help much sooner.

He hadn’t been holed up in his tent for two days with increasingly worse abdominal issues. He was low on food, looked at the numerous remaining spots in the final leg where support couldn’t have reached him, and chose discretion over valor. 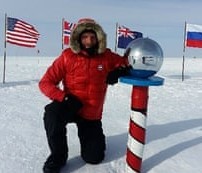 Later still, another Worsley acquaintance attempted the same. Unable to repair a pot that sprang a leak, he weighed the title against the potential of being unable to melt water for food and hydration – especially if a storm blew in and kept aircraft from reaching him.

He abandoned the “unaided” title he’d wanted to claim. A pot was air dropped. He went home alive, too.

He didn’t actually finish the trek. He was plagued by some crappy luck with weather, gear, and minor injuries, and eventually called for a retrieval. When I was trying to find an image for this section, I ran across his trip diary and discovered that he examines death by papercuts, too – http://www.southpolesolo.com/uncategorized/issue-management-teapots-and-tent-poles-contd/. It’s well worth the read, the whole log and that much more succinct review.

The tragedy depicted in The Perfect Storm wasn’t about glory or pushing the human limits. It was much closer to the disasters the average person will face. 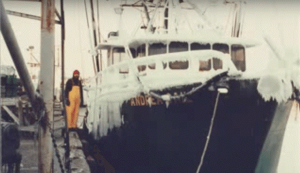 A group of guys needed to work to support their families. They chanced a late-season trip and storms, and they never came home.

The movie deviates enormously from known facts, and pretty normal/regular situations are heavily dramatized and turned into emphasis points the landlocked crowds will gasp over, so bear that in mind if you watch it as a review.

Most of us are unlikely to face Everest or super storms at sea. The lesson applies all over, though. We see it everywhere – “fight smart, pick your battles” versus “play hard, no quit, retreat hell, one more”.

We see it in high school and college sports with a teen or barely-twenty kid. Tape the joint, use the legal but potentially dangerous enhancements, play dizzy, ignore pain, versus saying, “I can, but I won’t – it’s not worth never playing again or lifetime repercussions”. 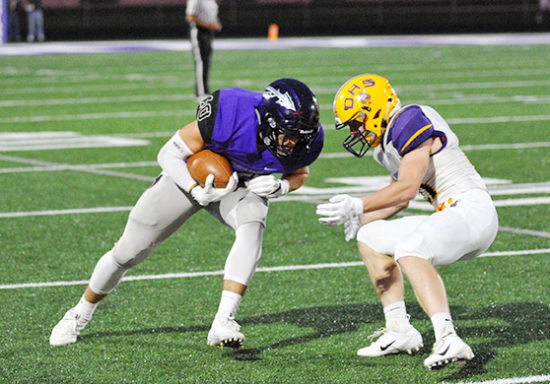 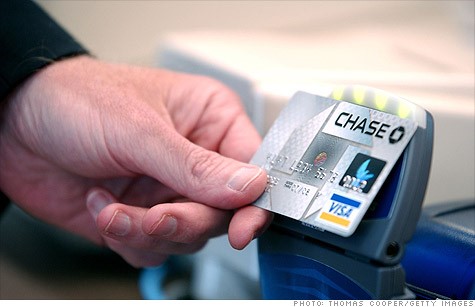 Fires, floods, job loss, accidents, injuries, illnesses, the outdoor misadventures that lead to SAR rescues and body recovery (usually, anyway), maxed-out income without financial safety nets … The disasters are all around us.

So are the little compounding rasps fraying our safety lines; the paper cuts, speed bumps, and weakening links in our chain.

Sometimes, we say it’s not so bad, and we get through fine. (This time, anyway.)

Sometimes, we don’t. We lose houses, farms, rack up debt. We put off dealing with a chronic injury/illness until it’s affecting other parts of our bodies and our whole lives. We keep heading out with a skipping engine or sliding shoe, and end up adrift in an angry sea or with a rolled ankle leading to a bad fall. 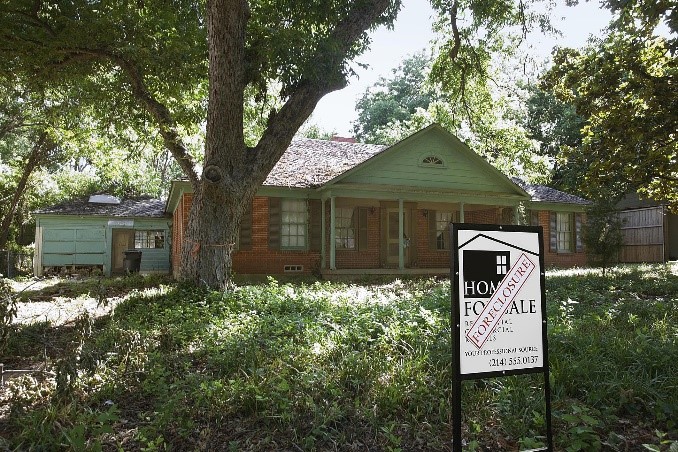 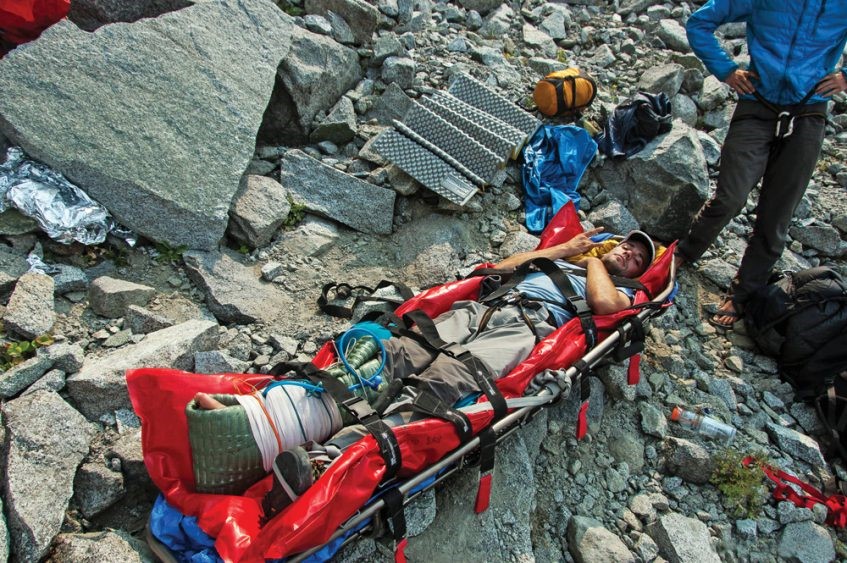 We forget that it’s not always just giving up, wimping out, taking an easier road.

Sometimes, it’s retreating from a battle so we can win a war.

Papercuts are guaranteed to happen in any widescale disaster – homestead, retreat compound, or bugging out to the wilds to survive WWIII, the next Great Depression, the Big Freeze or Big Rock. We have to look as they accumulate – at ours, and the ones we see on the news, in the movies, on TV; in the bush, with an engine running just a little warm on the way to work, or the way we spend income.

We have to ask how we got them. And then, how do we prevent infection, prevent more.

We have to figure out how likely others are, and if we can handle. We may have to find an alternate option.

We truly have to look at worse and worst case, not best case. 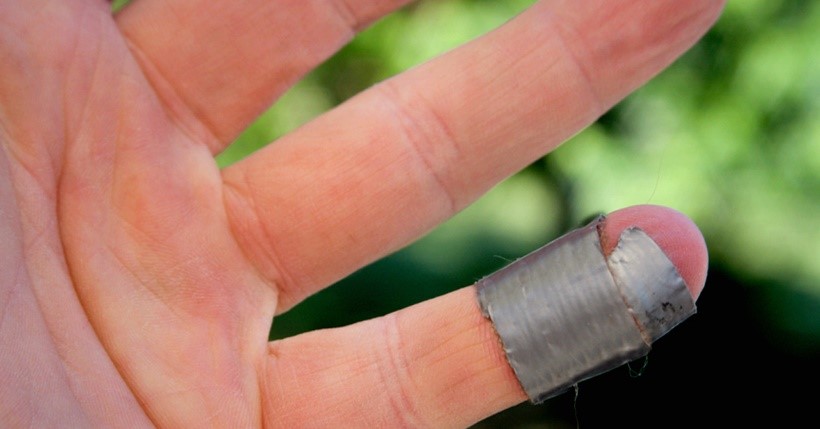 Ignoring the paper cuts, trudging on without deviation, denies us valuable intelligence. It’s only by acknowledging them, and possible consequences, that we can accurately assess, and then successfully adapt and overcome.

Infamous or unknown-nobodies, plenty of people in history would like a re-do on a decision to push through after even seemingly small challenges.

Turning back, doing things differently, picking a longer path, taking a long beat and choosing safety and security before making decisions isn’t likely to lead to movie scripts. But it can mean going home.

That’s worth preparing for.

Though I’m not sure how I ended up here, I enjoyed reading this article. Thanks.

(Hoping you turned on notifications…)
Glad you liked the article.
I kind of tend to believe we end up where we’re supposed to be.

Preparedness is something promoted by most local, state and federal governments.
It’s not all tinfoil hats, big-time conspiracies, and aliens controlling weather/cattle/nutjobs. 🙂 Lots can go wrong in personal lives to merit some fallback and breathing room, and there are plenty of localized and regional events that make a little self-reliance well worth the efforts.

Thanks for commenting!
Cheers – R.A.