When I was in High School I ended up dating the cousin of a friend of mine over a long summer. Her name was Samantha, and she was what we called “geographically challenged” as she lived 55 miles away from me. And that 55 miles was all Los Angeles freeways, and all the horror stories about LA traffic have always been true. And though I had a car and a sense of direction, gas money and the fact that she lived with very strict grandparents, complicated things. So Samantha and I communicated by, are you ready, snail mail (and people both survived and prospered, honest.)

Add to that the fact that Samantha was a redhead, loved the colors pink and purple and would send me these long love letters in pink envelopes stuffed to bursting, drenched in perfume and always “sealed with a real kiss” in her red lipstick. And the kicker was she would sign them “Love, Sam”, her self-adopted nickname. Now throw in the neighbor my parents had who loved to go through other peoples mail. So on one occasion I found a love letter from Samantha, signed “Love, Sam” as always, that had burst open in our mailbox and after that the neighbor never looked at me the same again. Go figure. If that neighbor could see what comes in my snail mail now I am sure I would be under surveillance by some policing authority. 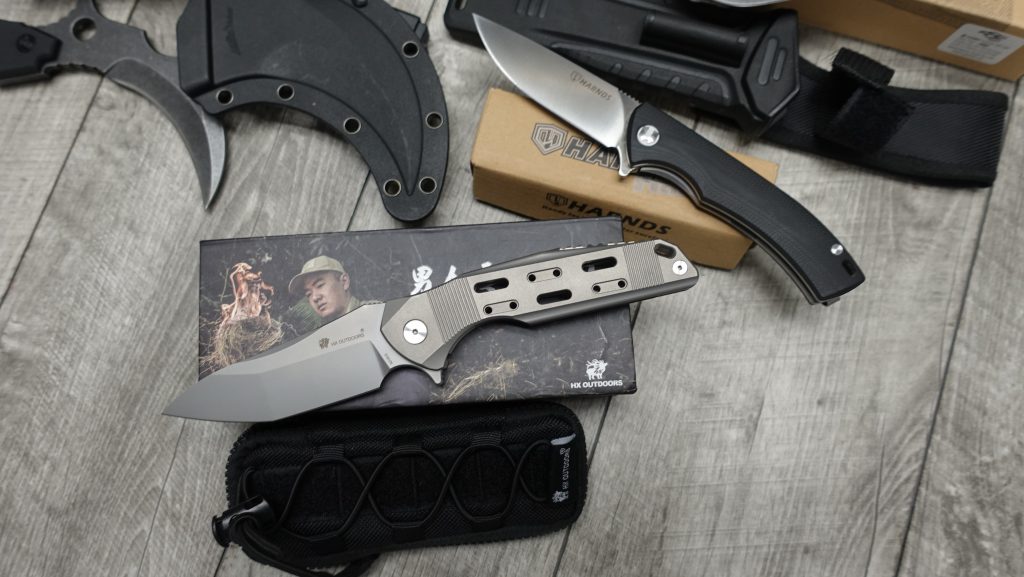 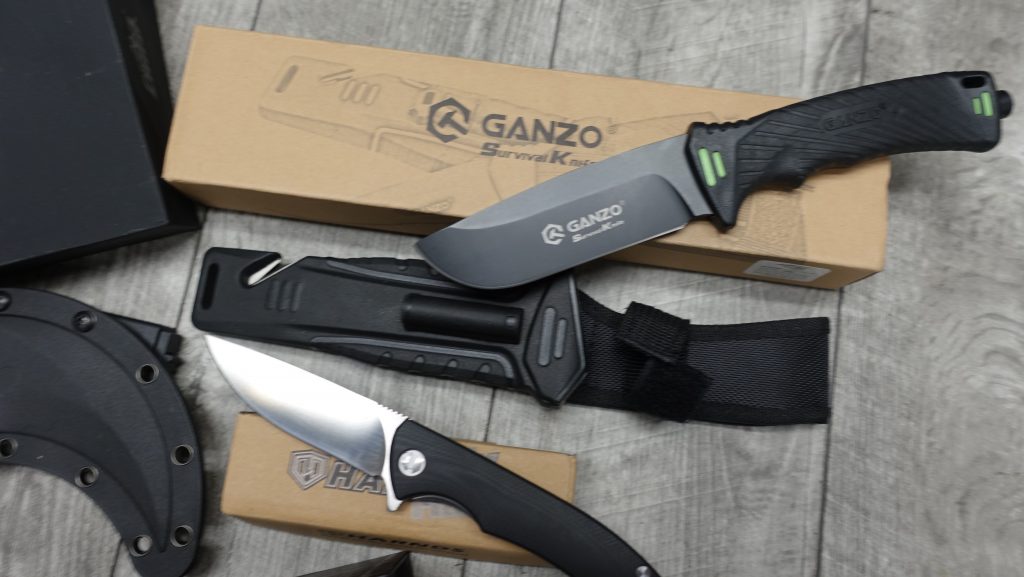 So when these treasures arrived from Grindworx she would be perhaps justified, for a change, in her suspicions. I can tell you that I have been offered trades for all four (4) of them from friends and so far I am not ready to part with any of them. In fact I am enjoying leaving them out for them in the hopes they will up the ante. Going through their offerings I would state that Grindworx is a great site for someone like me who usually loses things before I break them, usually. Pricing is attractive, the quality of the samples sent is good, and they stood up to my basic tests.

On the practical side my favorite is the Ganko Survival Knife with the seat-belt cutter and sharpener plate built into the sheaf, which could do some rough blade reshaping but is not a replacement for a good wet stone, but then again, not everyone always has a wet stone with them. The tube on the front of the sheaf, closed at the top, open at the bottom, could accommodate a number of different fire-starters. I have to admit that I have always preferred fixed blades, a personal thing. 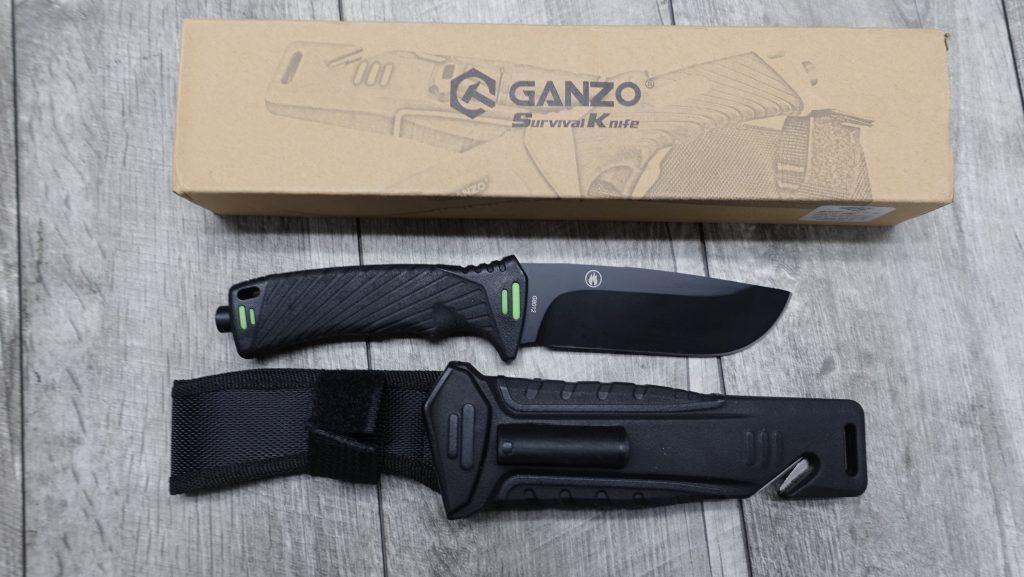 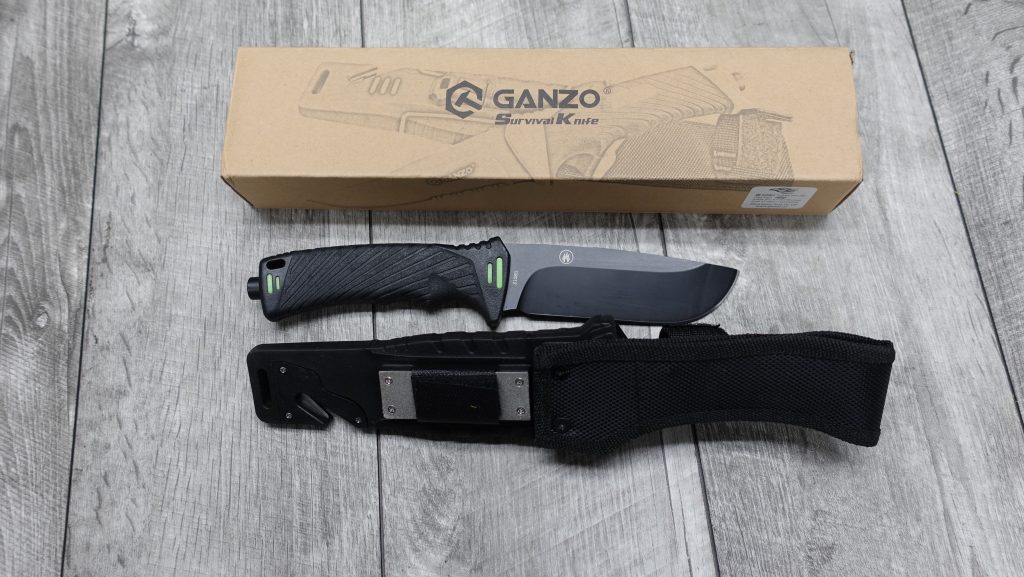 This is just one of many from Grindworx and it is solid and performed well when I used it to feather kindling, and to debone some raw chicken. It will go with me on my next trip off-grid. 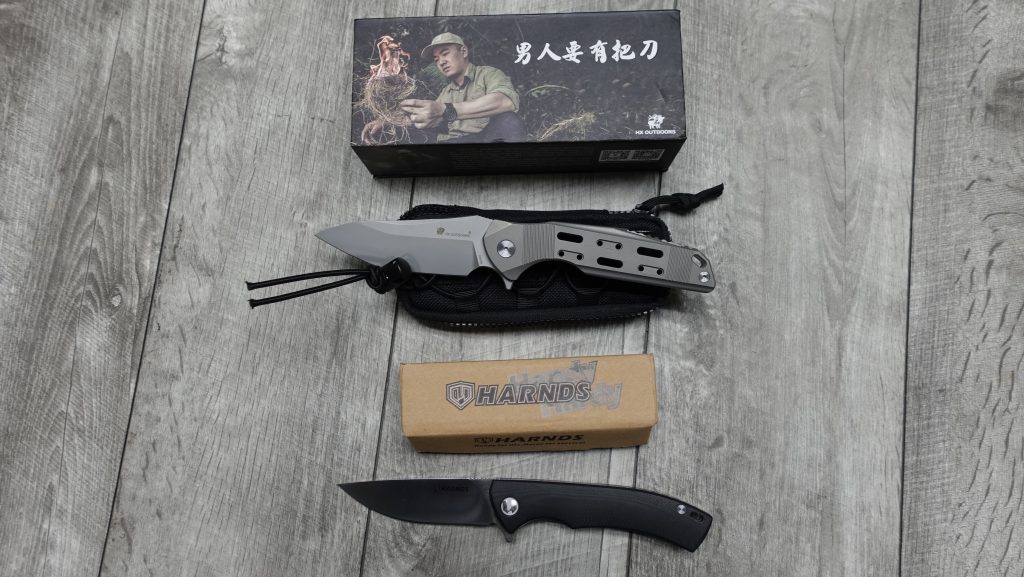 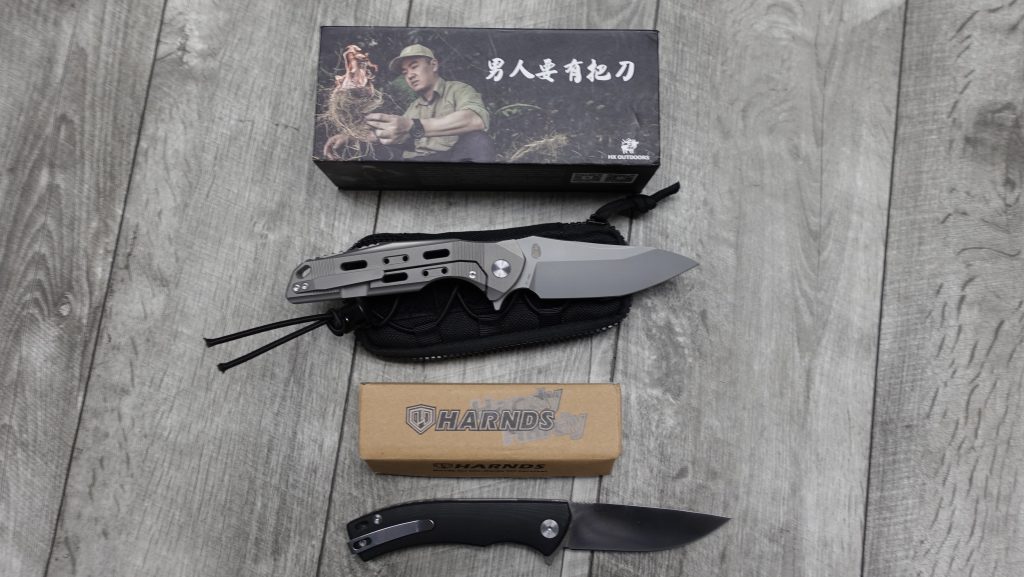 On the folding knives – they are great for concealed carry in a pocket, in an outside pocket on any BOB, 72-hour bag, Get-Out-of-Dodge bag, etc. Compact, built-in clips, relatively easy to both deploy and sheaf, with one drawback – in order to deploy the blade you need to take three actions:

In fact, having watched too many movies, I have to fight the urge to snap my wrist as a part of engaging the blade. I need to practice more to break the bad habit. Hoping to not get into a knife fight either of these would be a good addition to my EDC, and, in a fight, they would be very quick to deploy.

And Then There is This 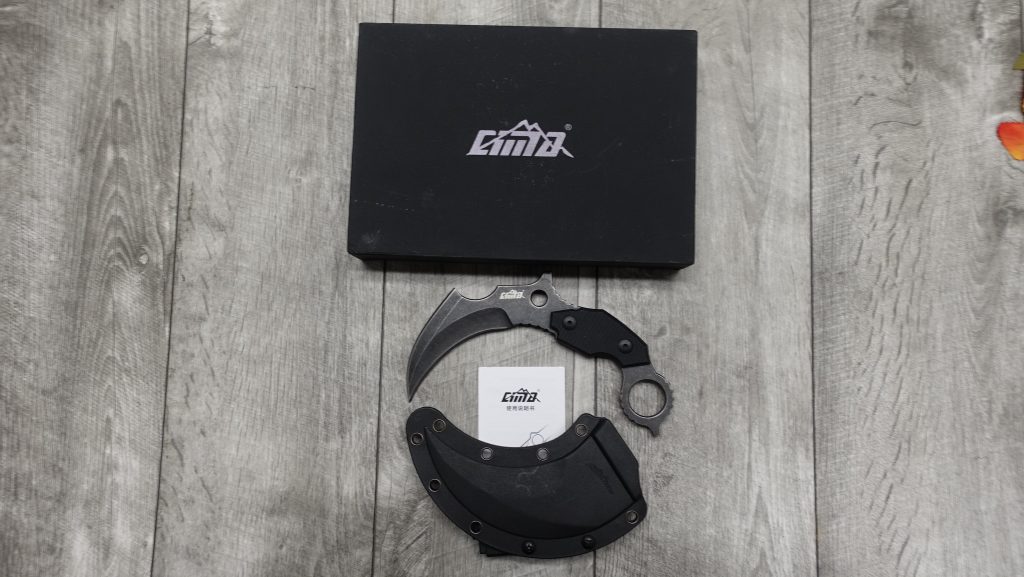 We are going to call it the Cima Karambit silat weapon, originally Indonesian. Karambit knives are “generally” legal in the United States, depending on state laws (what doesn’t?) and the blade length. Though it looks like something perhaps from a movie it is considered a “utility knife” or “pocket knife” throughout Southeast Asia. It is an EDC item especially in the remote areas of Indonesia, the Philippines and island nations of the area. The curve is a “traditional” adoption of the shape of a tigers claw and these knives have been in use in the region for centuries. It is actually much more comfortable to use as a tool than it looks, though it takes some getting used to for western hands.

Again, check your state laws – what is legal in Florida or Arizona may not be in California (D’oh) or Virginia, etc. 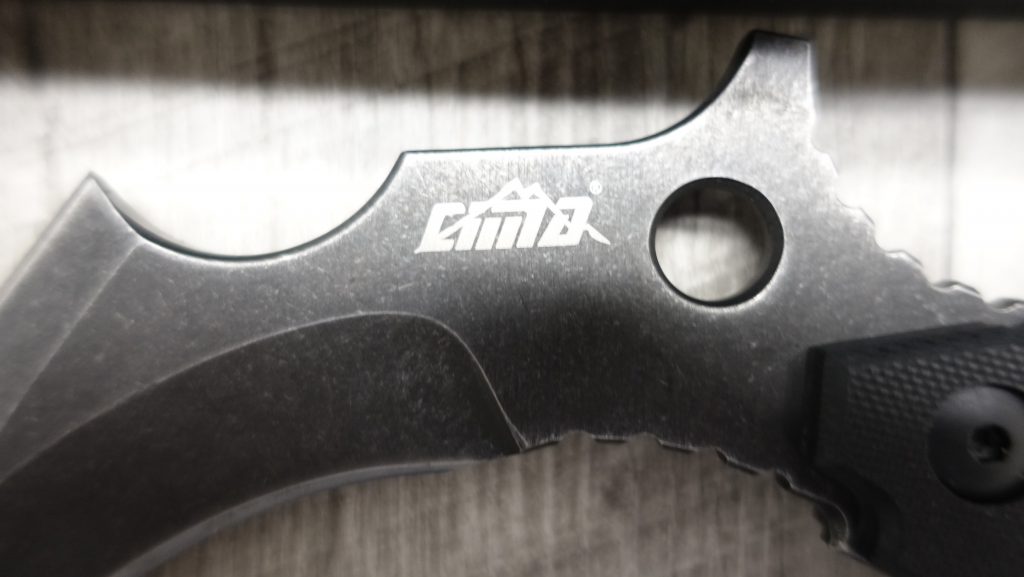 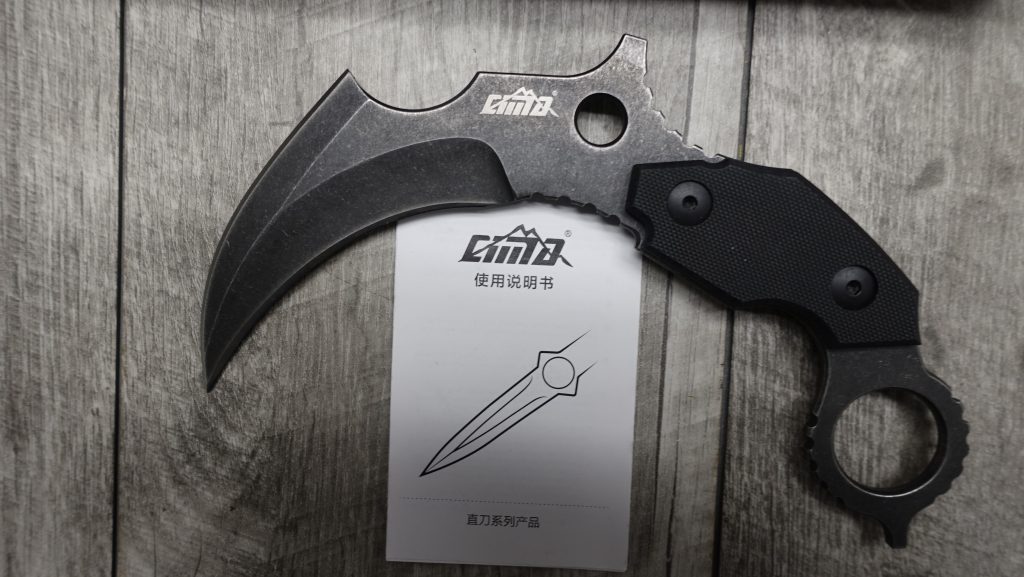 The curved sheaf has a locking belt attachment.

Carried as an “open carry” knife – in the sheaf attached to a belt and not covered by other clothing, and with a blade not exceeding 3″ it just might be legal to carry in some states. You see my point here, so many law writing entities multiplied by the time they are in session, divided by their averaged IQ. Needless to say this is the one that is of the most interest to my friends due to its shape. It is solid, composed of a single forged piece of steel, with handle grips that can be replaced with an Allen wrench. I don’t know its future other than to continue as a trigger for my friends.

I am going to add Grindworx to my resources page as a recommended source for what I consider a Preppers most important tool, a knife.

One last note on Samantha, the reason she lived with her grandparents was that her parents owned a cannery in Dutch Harbor, Alaska and would spend much of their time up there. The Grandparents home was big and one house removed from the beach front in Newport Beach, California so yes, the family was swimming in $$$. This was long before the “Deadliest Catch” was ever a reality show. Samantha remains both a regret and a humbling reminder whenever I start to think of myself as smart.