X Marks the Spot – Search Codes That Matter to Preppers 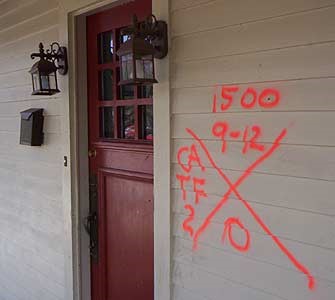 Editors Note: Another article from R. Ann Parris to The Prepper Journal. Admit it, when you saw the title you thought this was about one of the Internets search engines. Alas, and thankfully, it is about something so much more important. If you have information for Preppers that you would like to share then enter into the Prepper Writing Contest with a chance to win one of three Amazon Gift Cards with the top prize being a $300 card to purchase your own prepping supplies!

Search and Rescue codes largely entered mainstream American awareness in the U.S. courtesy of massive hurricane disaster areas. We saw them before Katrina, although she brought them into American homes and still bears their scars, and sadly, we’ve seen them since and will likely continue to see them.

For preppers, there are two main reasons to understand the most common codes used to mark structures by teams in a disaster area. 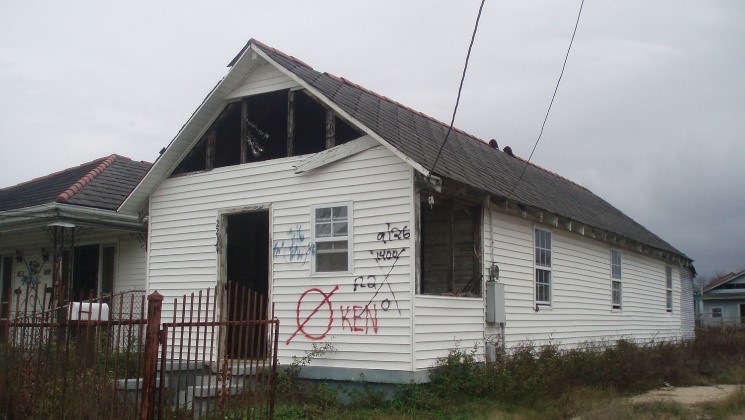 One, there’s the counter-intel aspect. They can be used as camouflage, misleading others about our home or the entire area around our home – which can keep others from even getting close to us if applied properly.

*Be able to cover or remove markings especially if applied to a whole neighborhood in case a real disaster occurs and somebody is able to respond. If it looks like another unit checked the area or has done follow-up recently, they may assume SNAFU is in full effect and hop the block/road to work an area that hasn’t been covered yet.

Two, we can use them to gather intel should we find ourselves moving through a disaster area. 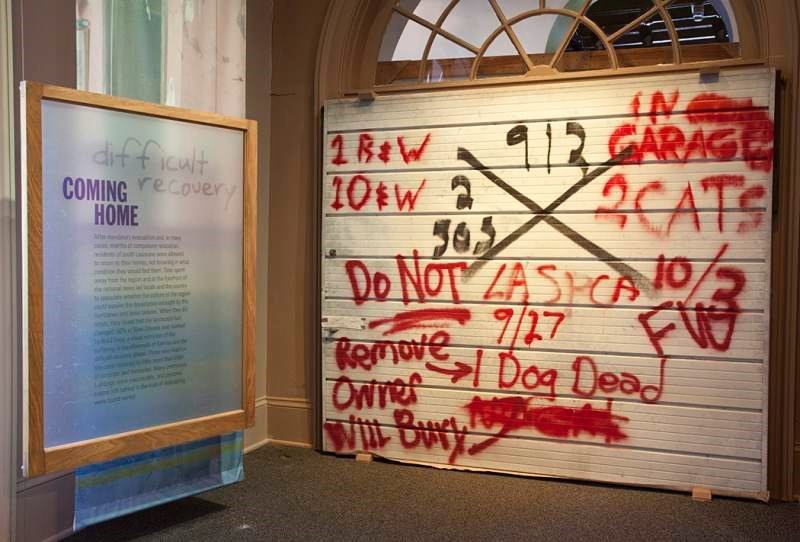 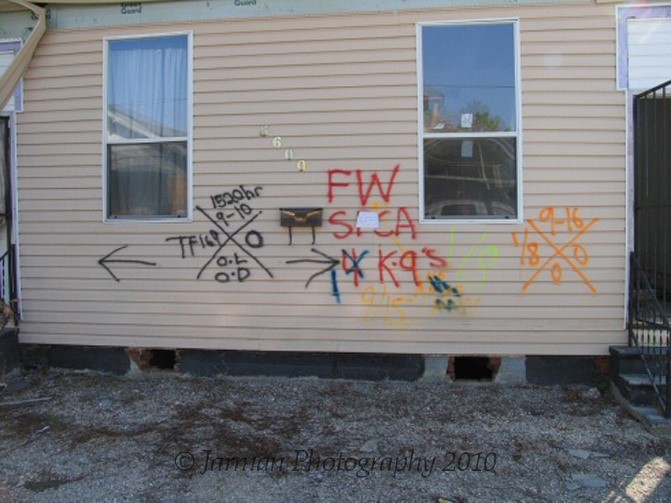 Let’s hit that “moving through” aspect, because there’s usually a lot of resistance there.

There are all kinds of reasons we might be out and about after a disaster, whether that disaster is what drove us out or we wander into the aftermath of a disaster while passing through.

That’s not the what-if of a paranoid prepper.

That’s straight from the news. 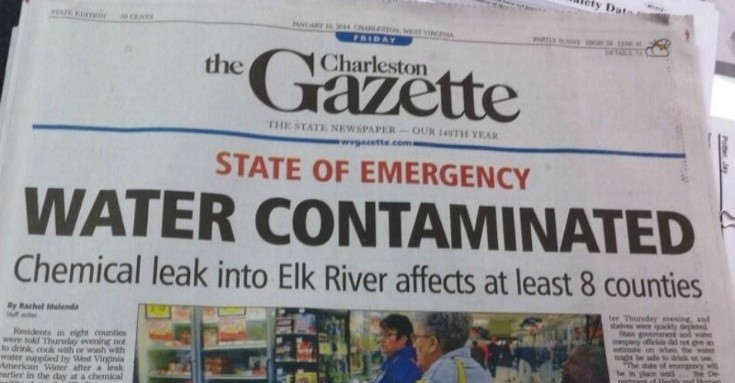 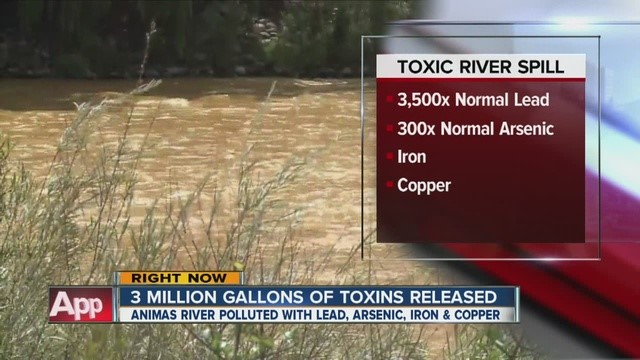 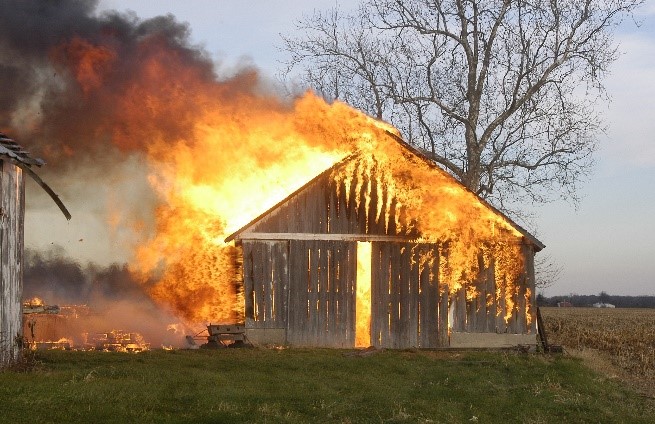 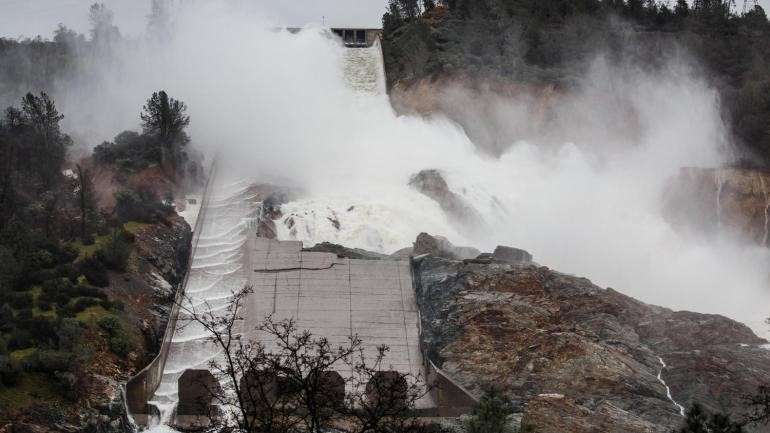 Fires occur and spread daily – it’s why you have a fire department. Annually, monthly, weekly, we get things beyond our individual control, already causing people to relocate or find alternate resources even with all our technical advances in our nice, modernized nations.

That’s not the WROL (Without Rule of Law)/pandemic human-contact concerns, or the cooling tanks in nuclear plants steaming off over days or 2-20 years. It’s not droughts lowering water tables, animal plagues, or woods too emptied of trees or animal/plant foods to sustain another winter and spring. It’s not somebody traveling even “just” 30-100 miles from home before a disaster strikes.

Using just things that happen, pretty regularly, portions of the population are forced from homes that had seemed like perfect locations.

There are all kinds of reasons to include a Plan B (or C,D,E…) that involves traveling, and not always in nice, empty backcountry. 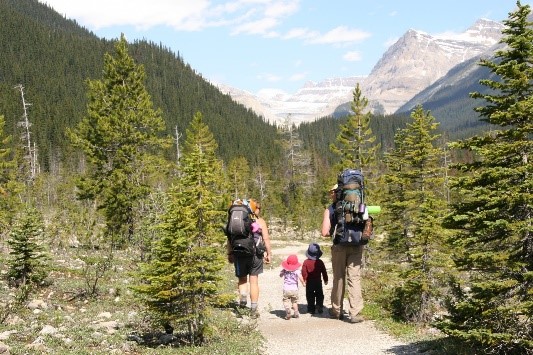 Being able to recognize what we’re seeing from either the “safe” resource site or avoidance perspectives while passing through is huge.

We can also plan to learn the CDC and HazMat codes that may become applicable even in our local neighborhoods.

Recognizing where we don’t want to be is one of the biggies for gaining International Search and Rescue Group – INSARAG literacy.

Lots of bodies, no marks for reclaiming them, disease is hella prevalent, pretty much guaranteed. I would rather not pick through a building that was already so questionable a search team opted not to press a full search. If it was already overrun by rats “then”, unless I’m desperate enough to eat them, I’d really rather hop well out of that neighborhood before we find a bed-down pocket.

We can learn lots of things when we know how to read INSARAG. The dates and updates alone can give us information about the area, human climate, and resource potentials. 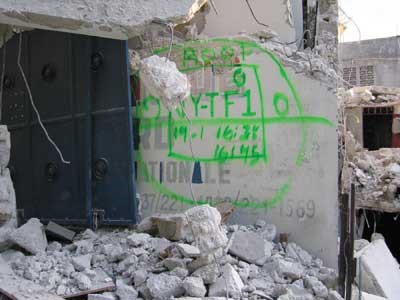 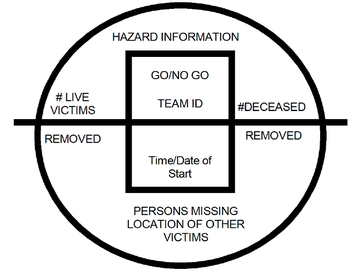 In the U.S. we mostly use and see FEMA “X” codes – a circle divided into quadrants. Other NATO nations use a circled box.

Take that with a grain of salt, because it’s “significant” hazards. Lesser risks that were no big deal in a mostly functional world can deliver a world of hurt if we’re already working with limited resources.

It’s also being assessed by teachers, lawyers, random National Guard types, clerks, landscapers, and cops, as opposed to firefighters, who develop a good eye for these things, or qualified civil engineers. 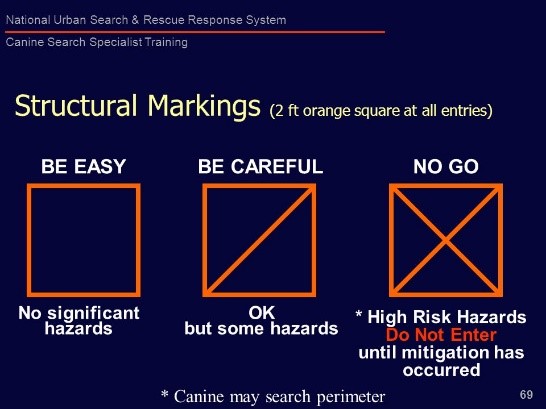 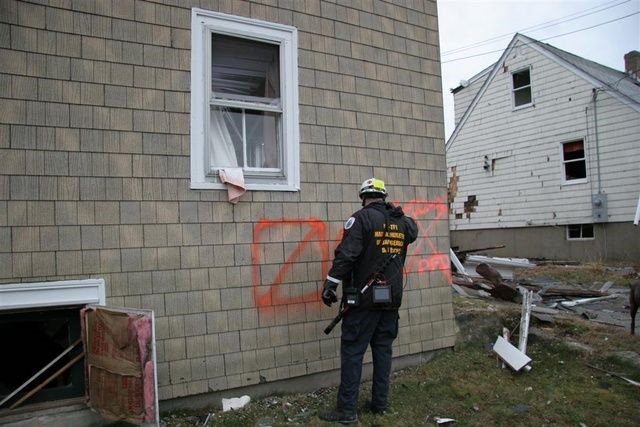 Those X’s that denote a big issue are worth paying attention to, period. Something stuck out at them to be marked. If that box is empty or “just” a slash … again, it was probably not cleared by professional housing inspectors. Be super-duper leery anyway.

There’s also a victim-location code based around a V. It’s sometimes used on its own, but it’s most commonly seen as an add-on.

All three contribute to streamlining both initial searches and follow-ups or retrieval operations. They convey basic information like the date, status of the structure, victim information, and risks. 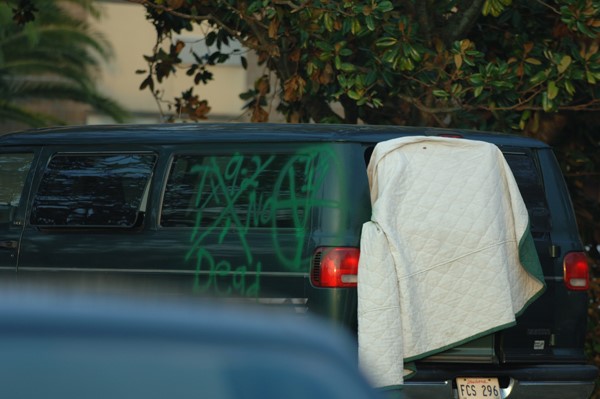 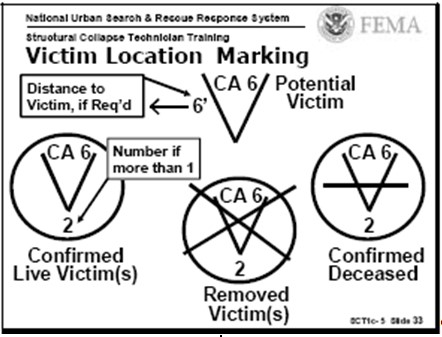 There’s some personal twists added sometimes, some specific-unit tweaks and shorthand, and in some cases, simplification and deviations that develop in really widespread disasters.

The variations can help us if we’re using them along with noise and light discipline to discourage incursions during excessive loss of rule of law or by looters/survivors after a disaster.

Anyone familiar enough with the codes to accurately read what we’re saying will expect to see some of those deviations. However, if you put information in the wrong place or use some random combination, you may actually attract attention.

X codes are most common in the U.S. but it’s worth learning what you’re seeing in NATO INSARAG boxes and reading-writing victim V-codes, too. 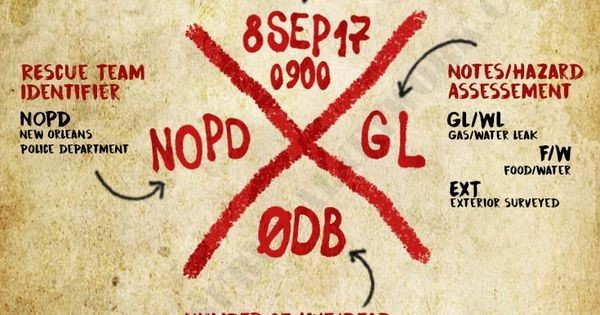 Top goes the date (and rarely the time). Left goes the unit that’s searching (and sometimes the time). Hazards, actions we took, and special notes go to the right.

Everybody knows a flood means human waste, wood rotting as it goes, and mold developing, but if the floor’s crumbling already, that gets put there with “hamster removed” and “GL” (gas or fuel leak visualized or smelled).

That’s also where a no-go, break-off, or exterior-only survey is noted, with or without a secondary structure box. 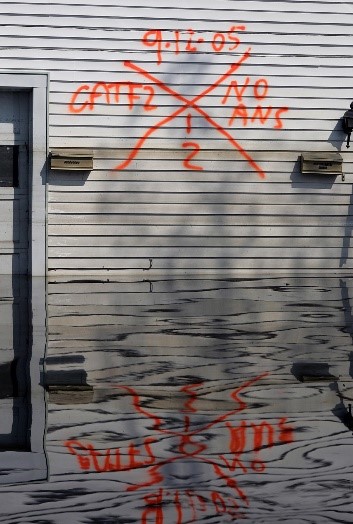 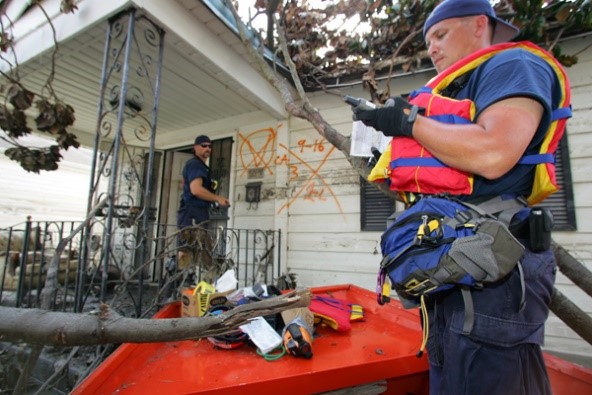 In the bottom, a zero or empty quadrant means nobody’s home, dead or alive. Victim counts are listed live to dead, top and bottom or left to right separated by a dash, dot or slash.

FEMA now advises to mark search results on windows and doors, and use their big stickers when available, instead of wrecking house paint and siding. If local teams are doing it and you’re aiming for camo, mimic them.

*If you’re marking for an animal rescue that’s coming through after you, make it Big and Bold, and note if it’s going to require saws/jacks to get them out.

One, there’s that “no go” structural safety box with the X. If professionals with healthcare did not want anybody else to poke inside, that’s a real good one to skip.

Two, we want to be hyper-vigilant for the word “dog(s)” somewhere. 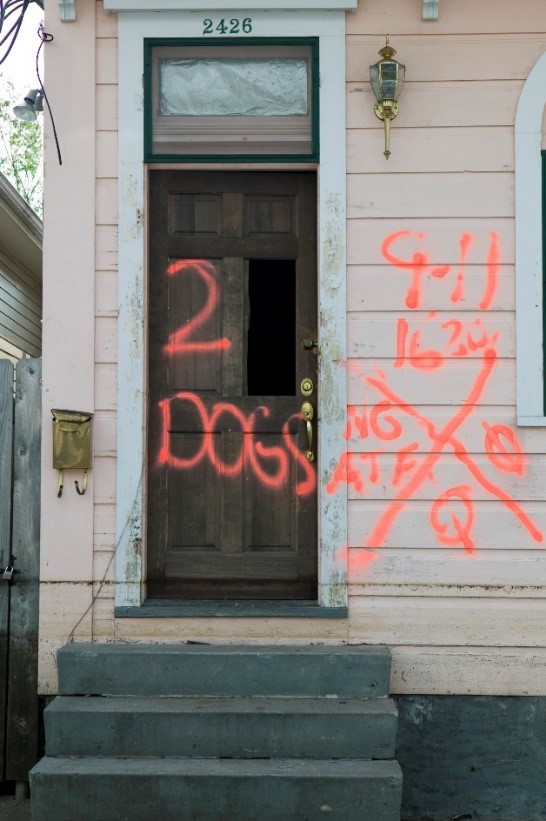 Now, I like dogs. I like my dogs a lot. But, my dogs make me very, very aware of other dogs. Especially my current girls, because they – Lab-terrier mixes, never strays, never starved, never abused, with no training for it – will separate, hug verges all nonchalant, easy-going postures, and then launch for takedown from multiple angles like a pack of lionesses.

So I watch for whether dogs are happy to see people, period, or happy and excited about chasing something that’s not as athletic as a squirrel. And I watch my flanks for others. 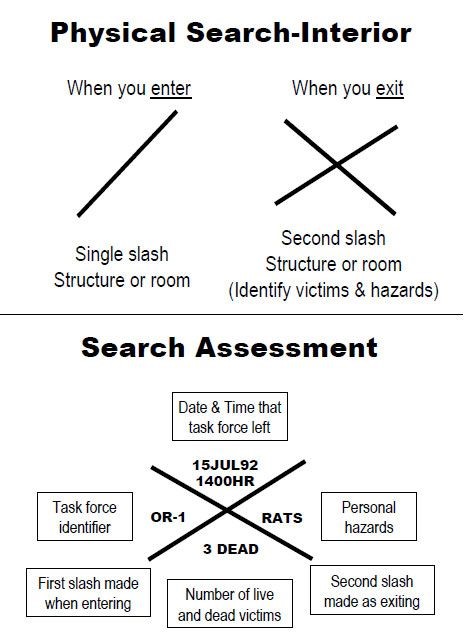 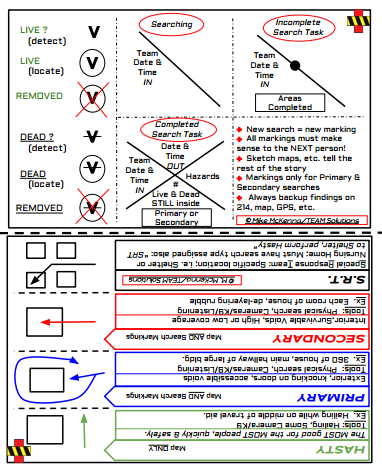 Three, we want to be very leery if we ever see a single diagonal slash with or without a date.

See, we’re trained to mark a slash – and, unit by unit, the date-time – before we enter a building or floor/area/apartment in large buildings. If we abandon a search before we finish, we are supposed to paint a dot/circle in the middle of it.  (Completed searches get the X, even if it’s “did not enter/exterior survey only – hazards”.)

Even if we’re leaving in a hurry, we’re supposed to put that dot on there.

That way if we don’t make our rally or contact, people know right exactly where we are. No question of did we get snatched off the porch, have an accident after leaving the building, or which building, floor, or compartment we bounced to next. If we drew that single slash and there is no other marking (+/- the date), we are still within that threshold. 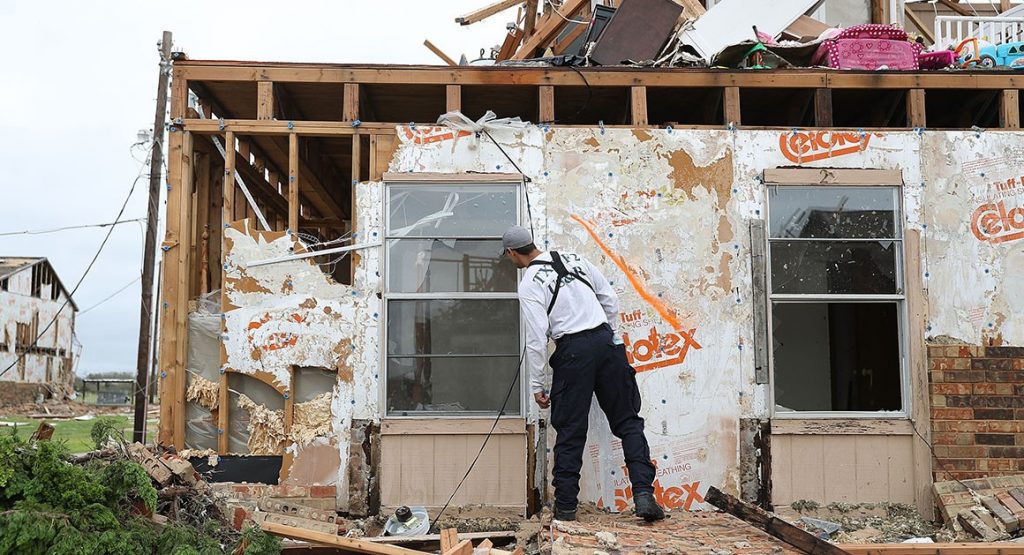 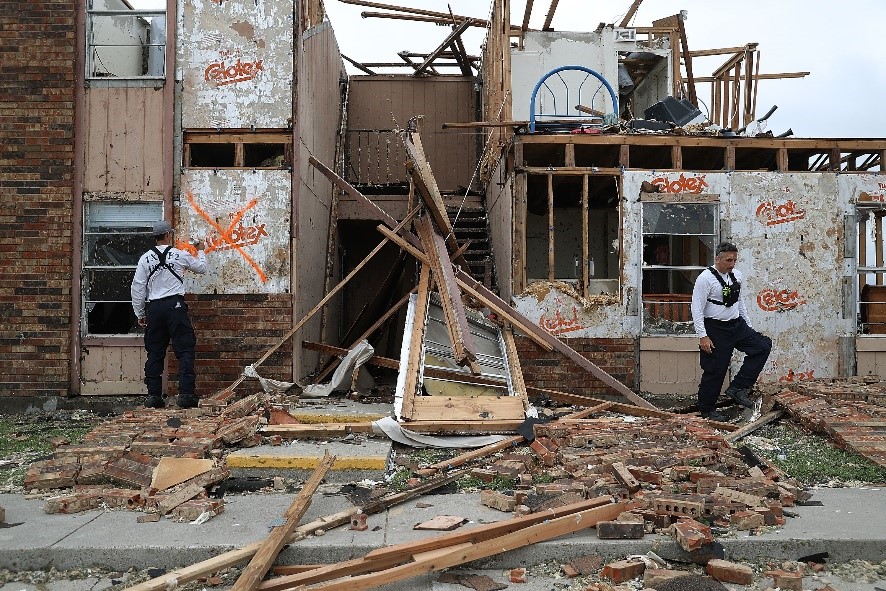 This applies to preppers as “oh my my” because if there is only that slash, we have two conditions.

One, there is still a team inside. Maybe good, if we’re seeking other intelligent life. Maybe cause to fade away if we want to go unnoticed.

Two, the searcher(s) went in and either did not come out or something so bad happened inside that they un-A’d the AO in such a rush they didn’t even take time for another slash and an X-box.

That suggests, right up there with dogs, bodies, and compromised structures, that we do not want to go through that door.

*If you’re aiming for camo in EROL conditions, don’t use that one. SAR, first responders, and military will go in after each other almost as fast as if we heard a crying baby.

Now, shorthand/personalization that develops in widespread disasters means some never even drew a slash. But if we see just that slash, that is a warning sign. 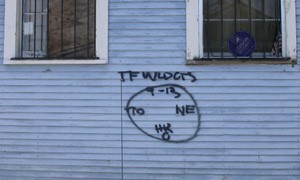 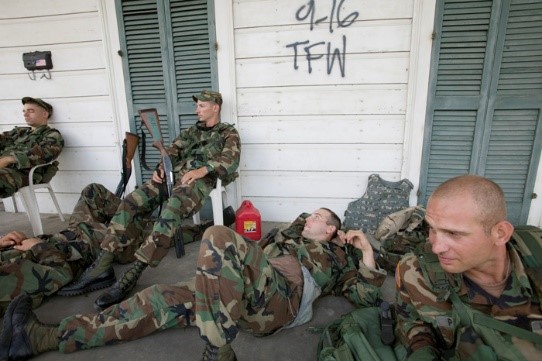 INSARAG can provide intel on local conditions just by the quickie versions that suggest more need than available CERT/SAR teams could handle, and give us the number and types of teams working an area.

We can also use clues from how they’re marked. For instance, any time markings seem really high up on a building, or have serious up-down wavering of lines, circles undulating like scalloped pattypan squash, or oval “tornado spirals” instead of circles, it indicates a flood high enough that it was easier/safer to stand in a boat to paint than be in the water. Heights and dates of marks can tell us if water was rising or receding. 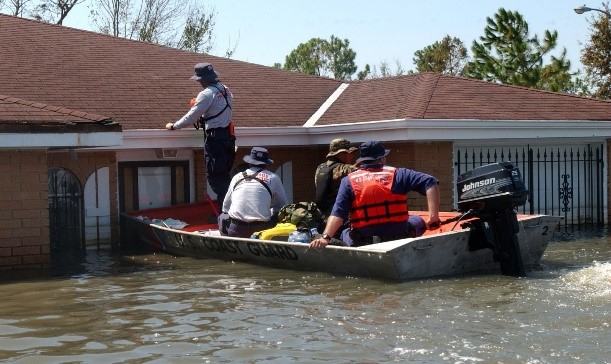 On the counter-intel front, we can use things like follow-ups and some of those super-duper bigtime warning signs to disseminate false information, projecting that fires gutted flats or stores, or there’s heavy mold and decaying bodies, etc.

They’re worth being familiar enough with to plan our actions to mitigate likely risks, choose avoidance of an area, or pick locations that may still have useful resources with the safest access, even if we’re not planning a bugout, ever. Too much goes wrong even right now to steadfastly insist we’ll never be away from home and traveling, or ever be forced out of our homes.