It doesn’t take long to start hearing about shipping containers once you’re in the preparedness world. They commonly get brought up as buried bunkers and cellars, although there are some factors to consider on that front. Shipping containers also feature in the tiny house movement, as well as portable and resilient homes and recycling-minded markets. They have structural uses beyond homes, though, and some aspects that can make them especially attractive to preppers.

The most common sizes are 8’ and 9.5’ tall standard and high cubes, and 20’ and 40’ lengths, although seacans come in one-third and half heights and run from 8’ square cubes all the way out to 53’.

The strength in a shipping container comes from the corners and edges – the frame. Just like a cardboard box is more likely to puncture, bulge, and buckle along the flat sides than the edges and corners, the actual roof and walls of a shipping container aren’t as robust. They’re still mostly made from good steel, so we’re not talking fragile here, but they’re not load bearing.

One of the things that gets passed around about shipping containers is their resistance to small arms fire. Yea and nay on that front. They are made more to be weather resistant than bullet resistant.

Steel T goose loads with an IM choke and #2 buck had some serious bulges at 25-30 and 50 yards, and a couple of shots had cracks around the bottom rim of the dings. It could have been the container or the specific manufacturer loads, but I wouldn’t feel real comfy saying a connex would stop them.

It was a spur-of-the-moment opportunity, so we were limited to the ammo and platforms immediately on hand. Sadly, in our universal giddiness, not even grandpa or the teenagers thought about pictures.

(Bonus: Should it ever become relevant, shovels are near-useless armor, even a trenching scoop. Total bunk. However, surprisingly lightweight backhoe buckets and snow plow blades will completely stop or divert even high-velocity green-tip rifle rounds. Cover behind those.) 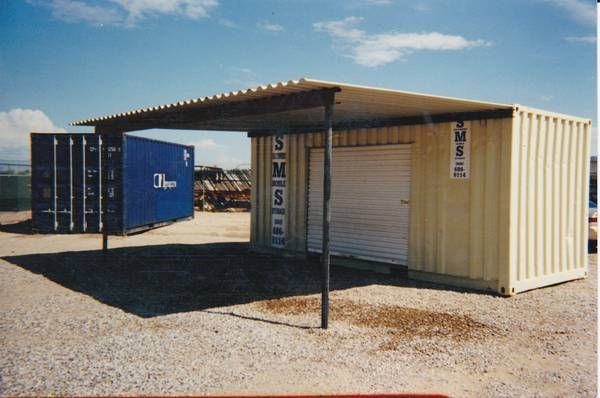 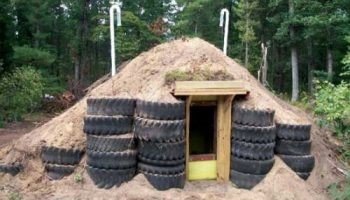 If you want to test something specific see if any of the connex or metal scrap dealers near you have chunks or doors – it’s way cheaper than buying and moving a whole shipping container. Otherwise, aim for the sections you plan to cut out anyway.

There’s lots that can be done to reinforce – both bulky like sandbags, water barrels, and filled-in old tires, and less bulky like taking apart another container for the sheets. Still, if protection is the deciding factor between connexes and something else, make sure to add the associated costs of that when you weigh it out. 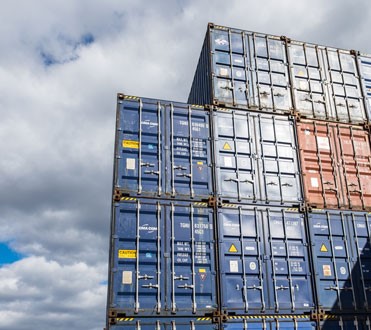 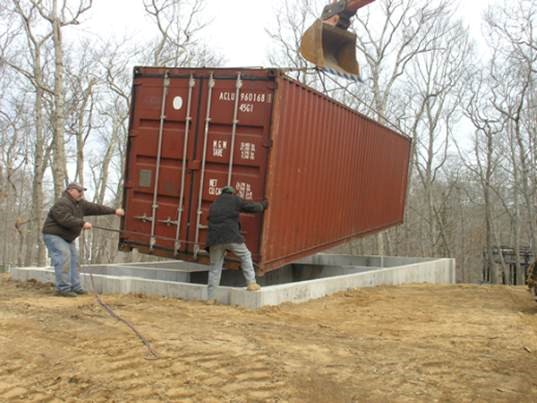 There’s a few things to consider about burying a shipping container. One, it’s going to most likely need ventilation, but they’re not air tight. Two, it requires serious reinforcing. Remember, the sides and roof don’t actually contribute to their weight-bearing capacity. Three, connexes are designed to be ocean-going and exposed, but not to be constantly inundated.

Soils hold enough moisture for that to require some additional work. Know the wet-season water table where you’re digging, for sure (for anything). It’ll affect soil movement, which can slowly twist whatever’s buried. As the soil and any pad shifts over time, the angles of pressure will change, too. Snow loads, tree roots, and the potential of somebody driving over it also have to be considered.

There’s some information about burying without enough precautions here https://containerauction.com/read-news/what-happens-when-you-bury-a-shipping-container and some steps that can prevent water and load damage in the video at the bottom here http://www.goodshomedesign.com/shipping-container-as-an-underground-shelter/2/. 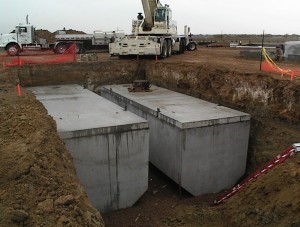 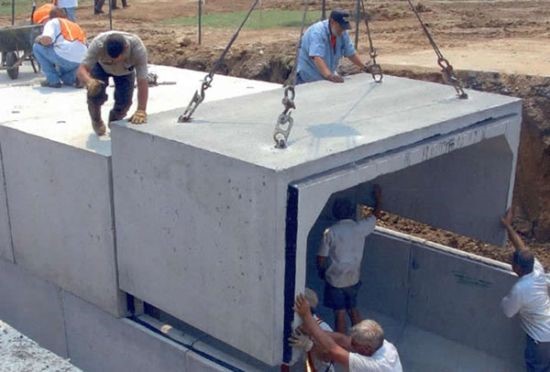 Depending on the purpose and size you’re going for, getting something that’s already built to be moisture tight, that’s meant to be buried and designed to take all kinds of loads and conditions, may be a more cost and labor effective option. Steel and concrete cisterns, box culverts, and round culvert have some of the same ready-to-drop aspects. Building with CMU and pouring a slab ceiling is also an option.

You’ll also want to check the hauling prices in your area – for containers and their alternatives – and make sure you have access for crane works as well as the truck if you’re hoisting (you’re probably hoisting for a bunker, but compare options). If you have to clear space, factor that into your project costs. 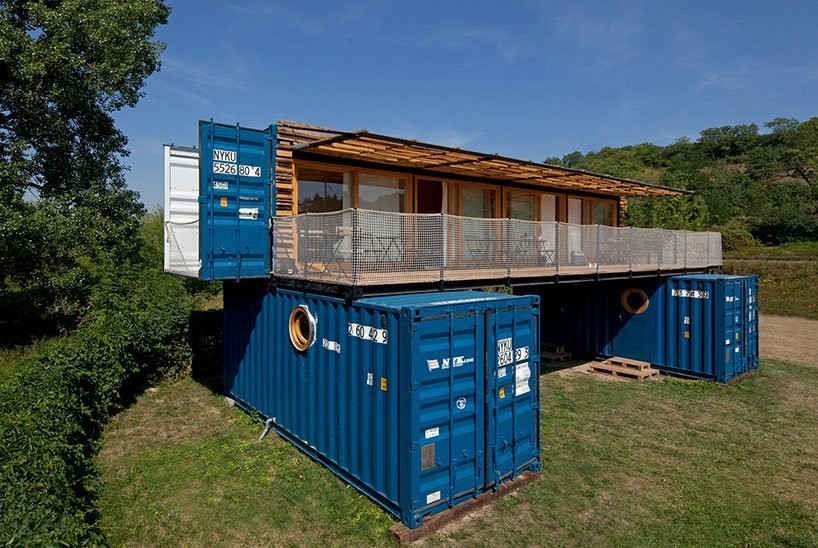 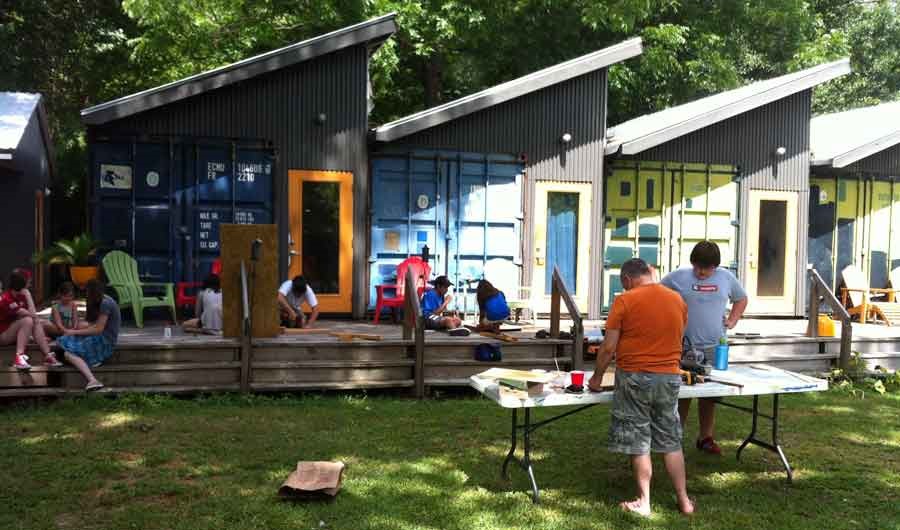 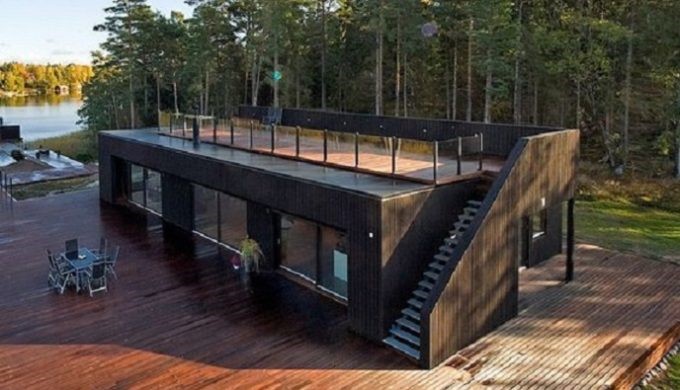 People of all walks are already using shipping containers for housing. While comfort may not be the driving factor in some preppers’ planning, it’s something that bears some consideration. Most connexes aren’t insulated particularly well. That drives up the real costs of owning a container home, both in today’s world and in the world(s) we’re preparing to face.

With some care in placement to increase shade and some decent ventilation, some of the heat issues can be mitigated, but heating in winter is pretty expensive. While each makes for a small area to heat, unless we insulate them – which eats up space, usually on the interior – or use something like a rocket stove connected to a thermal mass heater for a bedding or seating shelf – which is also going to eat up space – we’re going to have to heat more to keep the container warm. 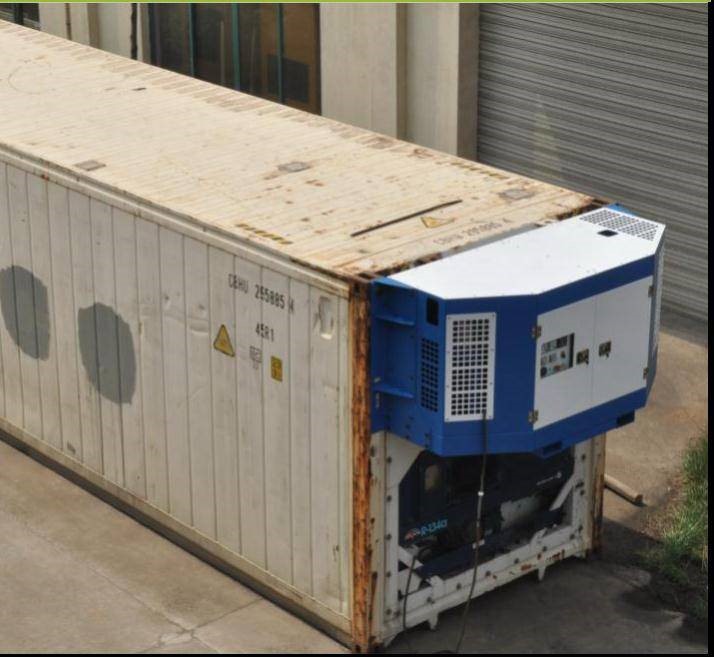 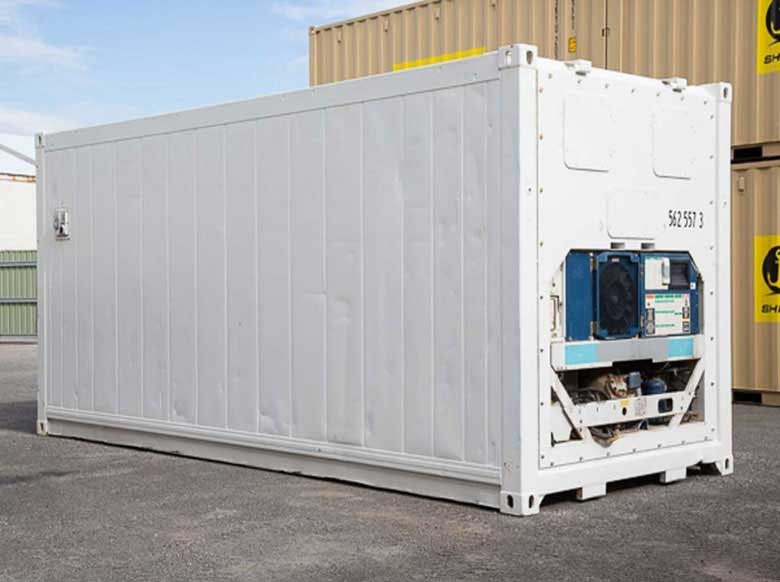 One of the solutions I see proposed due to temperature are refrigerated containers. They cost about half again to twice as much as standard connexes the same size. Fridge boxes are already insulated and there’s already some venting in place that can help with cooling and warming the space, which saves labor and finding parts later. You do have to deal with their specialty flooring and the factory insulation is still eating up space. You also still have to heat or cool them to maintain comfort.

People manage with crappy, drafty cabins even in Siberia, but if you don’t have the funds for a good tent/cabin stove and enough natural resources to fuel it, even temperate areas can get downright chilly.

If you’re willing to live in camping conditions for the duration of a disaster (and potentially leading up to it) heat and cold can absolutely be countered. Still, it’s definitely something to consider if you’ve never lived in an RV, Airstream, plywood camping/trapper shack, GI tent, or older mobile home without climate control. 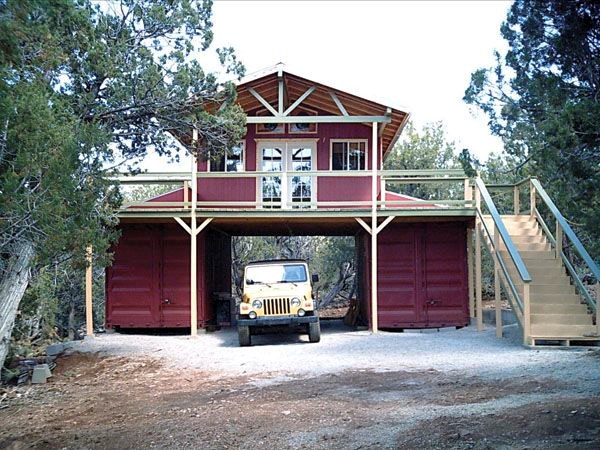 All of that isn’t to say I don’t like shipping containers. I actually love them. They’re more expensive than a prefab plywood or OSB shed, but they have their benefits and in my area, it’s not much more than trucking in a prefab shed with similar square footage.

They offer sturdy storage that does have ballistic resistance and strength against sudden-force hits from falling limbs and trees. They weigh enough to not get tossed around or lose roofs as often as lighter aluminum trailers or panel sheds. I’ve yet to see somebody bust a connex door with a kick or body slam, or the few good jerks I applied to a padlock latch out of frustration once (my key got stuck in the shed lock).

The strength of the frames means they can readily support roof spans. That lets us reap the storage space not only within the connexes, but also the area between two of them, or we can use a seacan for one side and only be supporting the other. Prefab roof trusses, roofing, and carports can make the expansions faster and easier or we can DIY it at a more budget-friendly price. 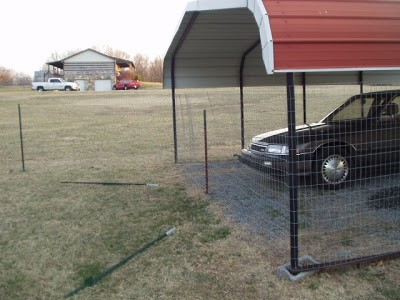 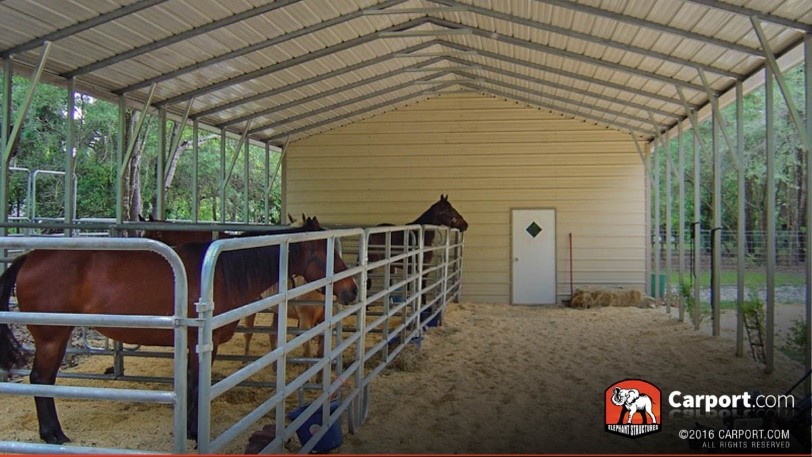 The other sides can be enclosed with fencing or with solid siding, be partly built up in block or brick, or be left entirely open. That inner area makes a shaded, more secure, and somewhat protected space depending on what we choose.

We can increase protection by aligning the connex(es) so they face winter winds and common summer storm directions broadside or quartered. Or, we can arrange them to maximize summer breezes to combat heat and dampness issues. 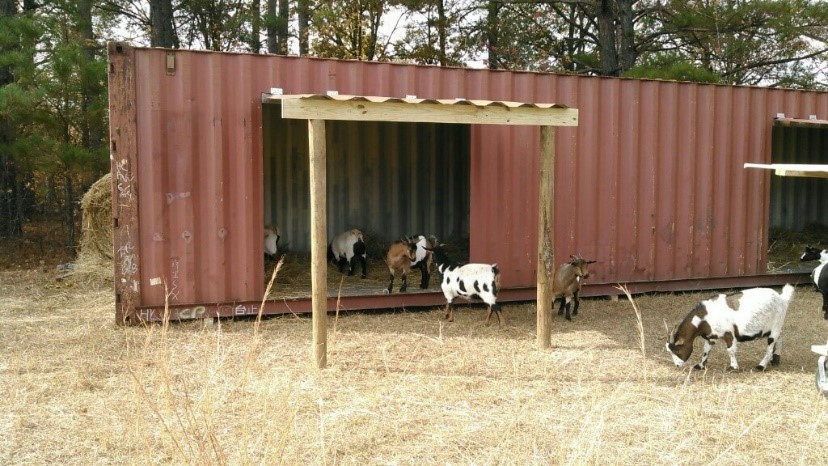 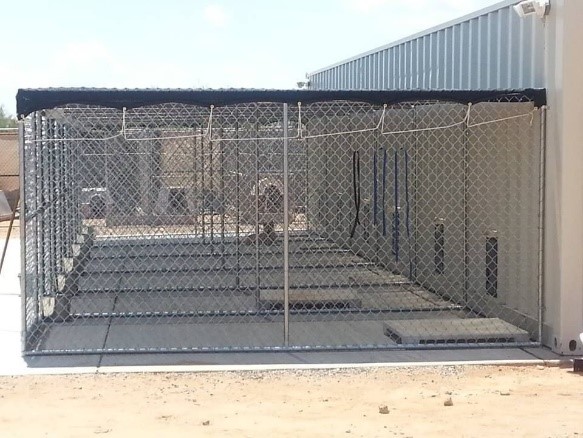 The non-insulated drawbacks of shipping containers also applies to livestock, though, and may limit options or require buffers. Another thing to consider is the flooring. Many have wood slat or plank floors. If wastes can’t be cleaned from those or if they stay too damp, they’ll rot. It’s not only a health risk from ammonia, mold, and mildew, but also possible injury busting through the floor.

Still, because the sheathing and slats aren’t structurally bearing, we can cut pretty much any holes we want in them. That means we can capitalize on sub-grade connexes (and their lower prices) if the damaged areas align with what we’d remove anyway. 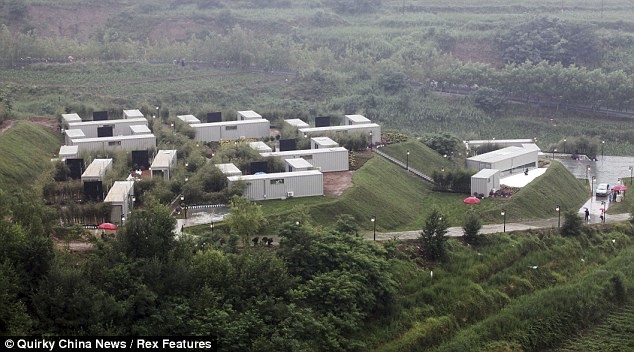 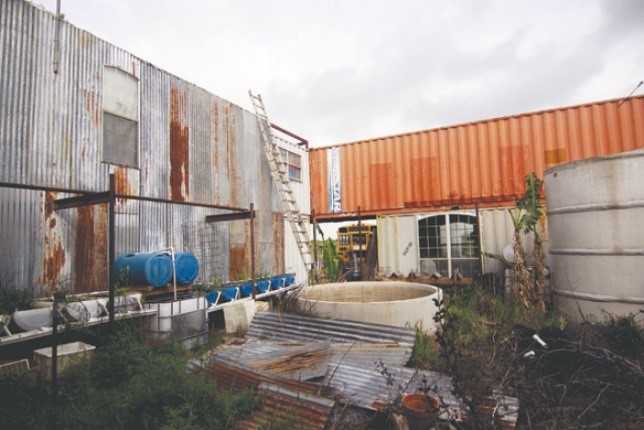 A bunch of shipping containers make for a mighty expensive fence. Still, they’re pretty economical as a little inner castle wall. Even just one tier high they offer a somewhat elevated vantage point and they do have some ballistic protection – especially a shipping container that’s intact on the outer side, with storage on that exterior side and doors and windows on the interior.

Rooftops can be outfitted for water catchment and solar or wind collectors and easily accessed with step ladders. With some reinforcement they’re options for rooftop gardens that won’t face as much predation, and surface area for water storage. Those tanks offer increased passive drip range thanks to the elevation (water will reach further without pumps). 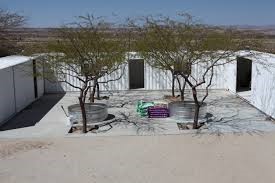 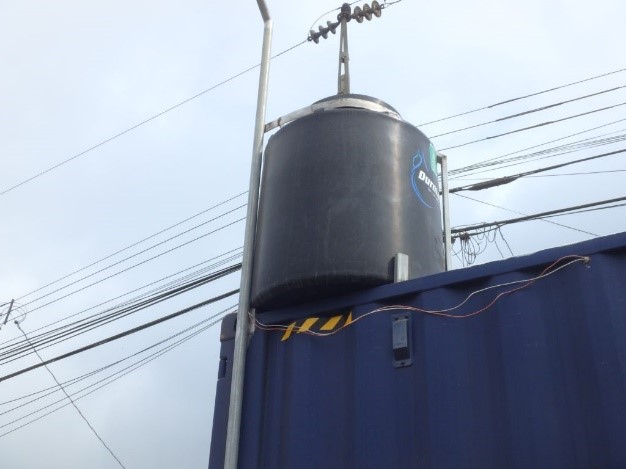 An inner courtyard might only be creating a safer recreation space and the mental health from being able to get outdoors during a lockdown scenario, only to increase our privacy, or increase protection for tools and equipment. The added protection also applies to fresh food sources. Even with 20’ containers that only leave a 12’ square inside, options include espalier or columnar fruit trees or shrubs, container or in-ground gardens (vertical to maximize space and production), a few rabbits and-or ducks, or an aquaponics setup.

Our inner courtyard might be surrounded entirely by containers, or containers might abut preexisting buildings. We can finish other sides or corner gaps with fencing, or we can plan to drag heavy vehicles to block them and create 360-degree cover. Other options for completing our walls include hugel mounds, raised beds, and water barrels. Small interior spaces can also be easily netted or roofed for more shade, weather protection, or privacy. 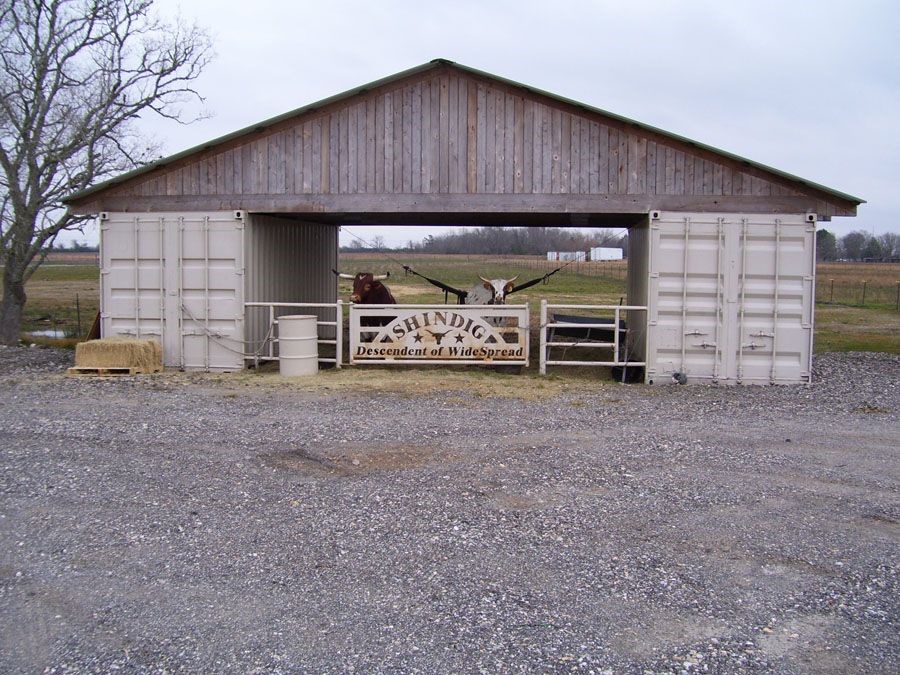 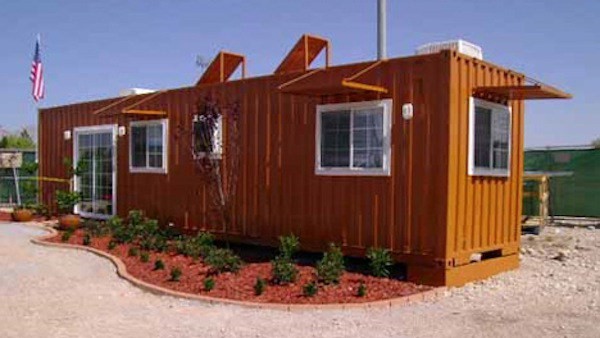 When we weigh the pros and cons of shipping containers, DIY construction, and other options like prefab sheds, RVs, and box culverts, we need to factor in not only the installation costs but also costs to provide access for the trucks that will be coming in and anything we need or want to add so it suits our purpose, such as ventilation, sump pumps, reinforcements, doors, or windows. Unless condition truly doesn’t matter, find a local-enough source that you can get your eyes on the exact shipping container you’re buying to avoid any potential problems.

A shipping container isn’t the right choice for everybody. However, standalone, roofed, or combined with each other or other structures, as-is, minor modifications, or subject to major renovation, they are a good choice for some – for far more than buried bunkers and cellars.

I use a 45′ high cube as a combination workshop and storage. I like it and plan on getting a second to gang together.

Regardless of why you are getting one have a ventalator installed before you start using it. I didn’t and it’s causing problems now. Cutting the steel can be a fire hazard.