Stealth Vegetables and Vitamins At Your Disposal

Editors Note: Another article from RA to The Prepper Journal. As always, if you have information for Preppers that you would like to share and be entered into the Prepper Writing Contest with a chance to win one of three Amazon Gift Cards  with the top prize being a $300 card to purchase your own prepping supplies, then enter today!

“Round Fourteen of The Prepper Journal’s Writing Contest is coming Tomorrow!”

I grow a stealthy food source and I have never come across anyone who realized that it is edible.

The beauty of the flowers makes people think that this easily available variety is only useful as a decorative plant. It works well in hanging baskets. You might see this plant growing alongside the highway or you may already have this plant in your yard and consider it to be just a weed. 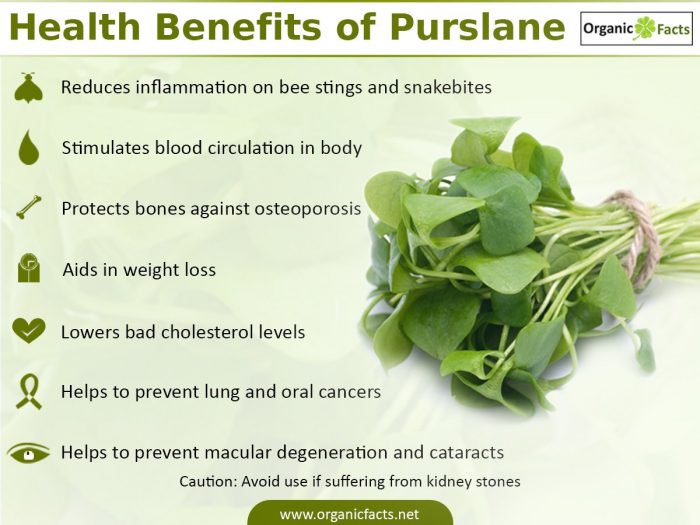 It came here from Persia and India and has flourished. This plant is known as Purslane.
The University of Illinois says that Purslane seeds have been known to stay viable for 40 years.

I bought 6 small pots of Purslane for only $1.47 apiece. I transplanted them into larger pots with some good soil and they’re getting big. This is despite me eating from them almost every day.

I also feed some cuttings to my flock of chickens. Purslane is very tender and very juicy.
It has thick, succulent leaves and stems. You can also eat the flowers. Everything but the roots. I think it tastes great and I’m a person who doesn’t like most vegetables.

Purslane works well in salads and juices but I prefer to just snap off branches and munch them in the garden. Doing this promotes bushier growth.

Purslane works great as the crunch in a sandwich. It can be steamed, stir-fried or pureed.
Purslane is also used as a spinach substitute. 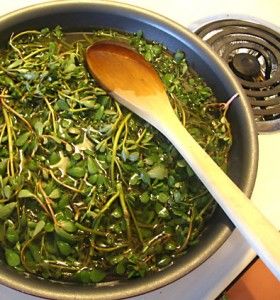 It’s best not to overcook Purslane.

The wild Purslane has yellow flowers. I grew some from seed but the ornamental varieties I bought at a garden center do better for me. The best way to propagate Purslane is through root cuttings.

Ornamental Purslane can be red, pink, coral or white. I think they taste just as good as the wild Purslane.

There is no leafy plant with more of the highly sought Omega 3 fatty acid (α-linolenic acid) than Purslane. It even has more than some fish oils. It safeguards you against heart disease & stroke & also helps with autism and other developmental diseases. The Stanford School of Medicine says that Omega 3 fatty acids help prevent cancer.

The United States Department of Agriculture says that Purslane is a source of vitamin C, vitamin A, vitamin D, riboflavin, niacin, pyridoxine and carotenoids, iron, magnesium, calcium, potassium, and manganese, along with two types of powerful betalain alkaloid pigment anti-oxidants; the reddish beta cyanins, and the yellow beta xanthins.

The Chinese have long used Purslane to treat intestinal conditions due to the organic compounds found in purslane, including dopamine, malic acid, citric acid, alanine and glucose. Purslane is said to improve skin, improve vision, strengthen bones & improve circulation. Purslane is very low in calories and helps with weight loss.

Right now you can be benefiting from a vitamin source better than any pill.
In a survival situation where rationing and shortages are the norm, this can be vital. 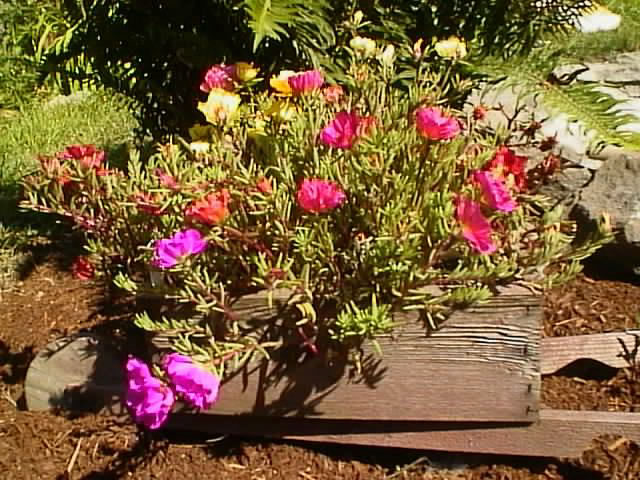 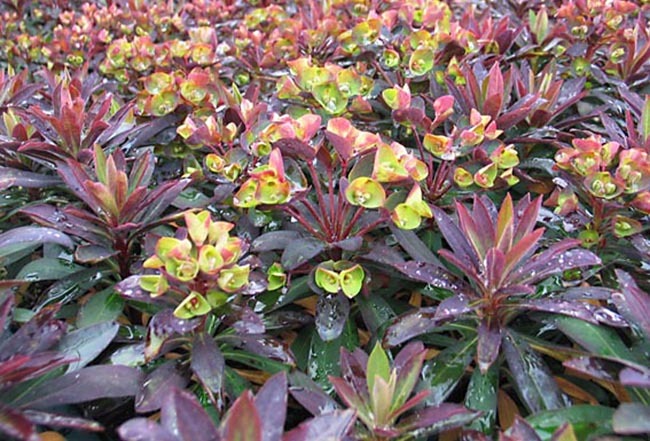 The plant Moss Rose is often confused with Purslane. Be careful not to confuse Purslane with the Spurges. They have a similar stalk and also like to grow low along the ground but although the leaves may have a similar shape, they are not succulent like Purslane, which seems more like a Jade plant. If in doubt, break the stem. Purslane juice is clear. Spurge is milky white.

It is best to avoid plants with milky white sap. 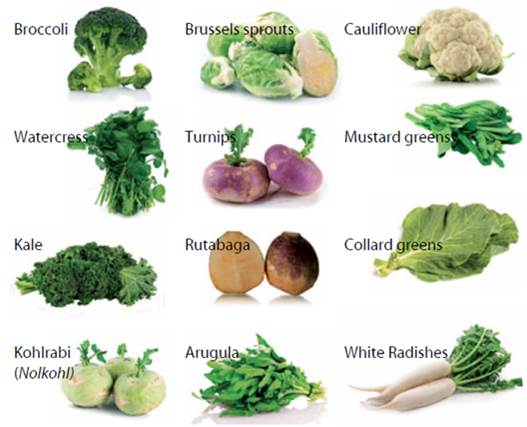 Purslane contains oxalic acid. Those with known urinary tract oxalic stones should not eat Purslane or members of the Brassica family of vegetables. I have been eating lots of Purslane all year with no ill effects.

There is another plant that you should grow, if you have any kind of livestock.
That plant is Comfrey which grows large leaves up to 18 inches long. 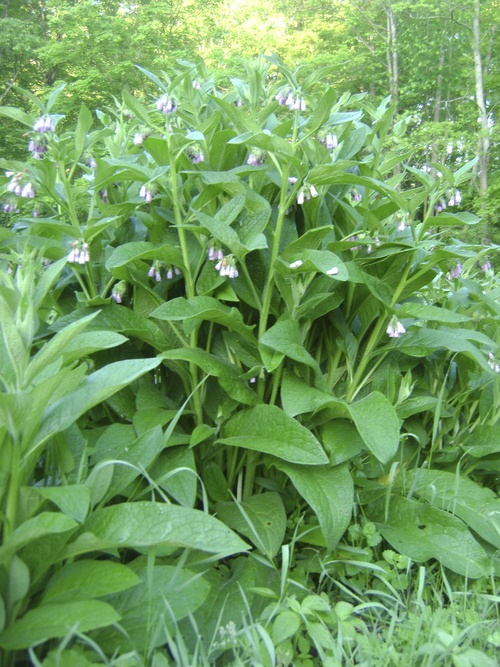 You can chop the entire plant 5 or more times each season and it will grow back.
Feed the leaves to your chickens, rabbits, ducks, turkeys, goats, pigs, sheep or cows.
You can also grow quantities of Comfrey and dry the leaves for Winter use.
Animals enjoy it either way and even dried, it retains its very high protein content.

There is a common variety of Comfrey known as True Comfrey but most people use a Russian variety that can’t produce viable seed. This is because Comfrey grows TOO well and people want to maintain control of it. 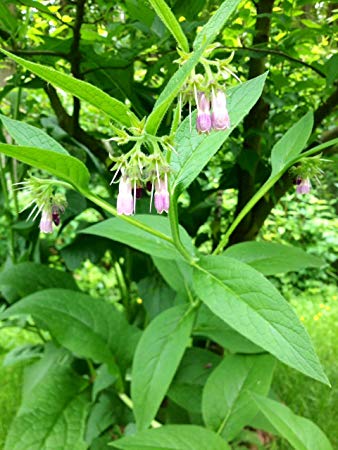 Even with the Bocking varieties, they propagate easily through root cuttings. You can start with one plant and in 2 years, have a thousand plants if you wish. Bocking 14 is the most popular variety but I have recently planted Bocking 4, which is said to be even more palatable to animals.

Comfrey is also renowned for its medicinal properties. It can be made into a poultice that helps healing with ailments that reach all the way into the bones. Comfrey fell out of favor in the 80’s when an Australian report surfaced claiming that it’s alkaloids are harmful if ingested. 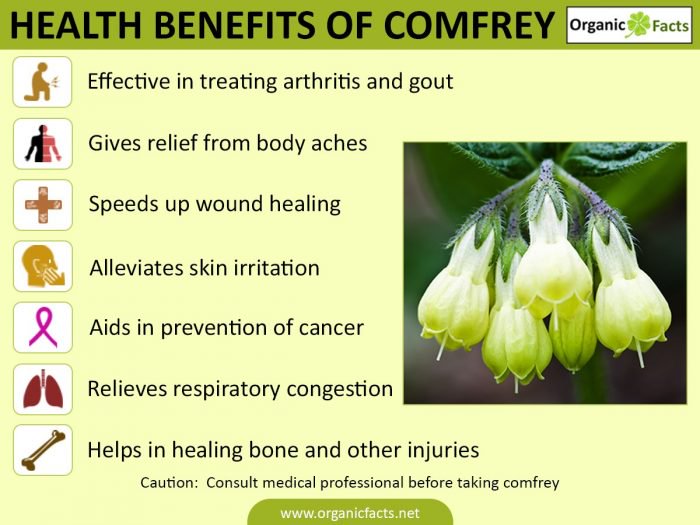 I don’t know of any people who are eating Comfrey but many people now dispute those findings and many people report making Comfrey a large part of the diet for their livestock without manifesting any ill effects. According to the book, The Safety of Comfrey, by J.A Pembrey, “there appear to be no cases, in medical history or veterinary records, of humans or animals, showing clinical symptoms, of pyrrolizidine alkaloid poisoning from the consumption of comfrey.”

From the site – Simple Unhooked Living –
“Foster Savage, who takes credit for introducing comfrey into Australia in 1954, fed it to his stock in great quantities (and ate quite a bit of it himself.) He found that milk production increased dramatically in his cows, with the bonus of thick cream. He also fed his pigs as much comfrey as they could eat and the quality of his meat became legendary. His butcher remarked that he had never seen pigs with such healthy livers.”

Comfrey is available as seed, or for the Bocking varieties, as root cuttings, live plants or just the crowns of newly emerging leaves.

There is a multitude of information about these two plants on the internet. Research them for yourself and consider growing them now so you’ll have this valuable resource at your disposal when any disaster scenario arises.

I neglected to mention that Comfrey is prized for use in enriching and activating your compost pile. It is a nutrient accumulator that sends roots up to 10 feet deep and harvests the soil for minerals.
Purslane flowers like crazy. Even the cuttings that I’m rooting have flowered for the last 3 days. I cut all the flowers off and eat them each day and the next day the cuttings all bloom again. They would make a fantastic garnish.

For people living in the east and south-east, spring beauty (aka fairy spuds) is a nice, decorative edible plant, too. The tubers taste like nutty potatoes, and the flowers and foliage are pretty enough to use as a border plant. Daylilies (not Orientals) are also a good food source, as are common clover (roots, flowers, and leaves), dandelion, violets, nettle, and burdock. Throw a few “weeds” into your yard, complain loudly about how they’re ruining your lawn, and eat those suckers when nobody’s looking, lol.

Update on my results.
The free range birds nibbled at the Purslane and ignored it!
They must prefer all my weeds?
The young birds in the goat house are eating it.
I’m eating it.
Today I gave them the first taste of the Comfrey I grew.
They love it!

Just read how powerful the purslane plant is. Should easy to grow and prepare.