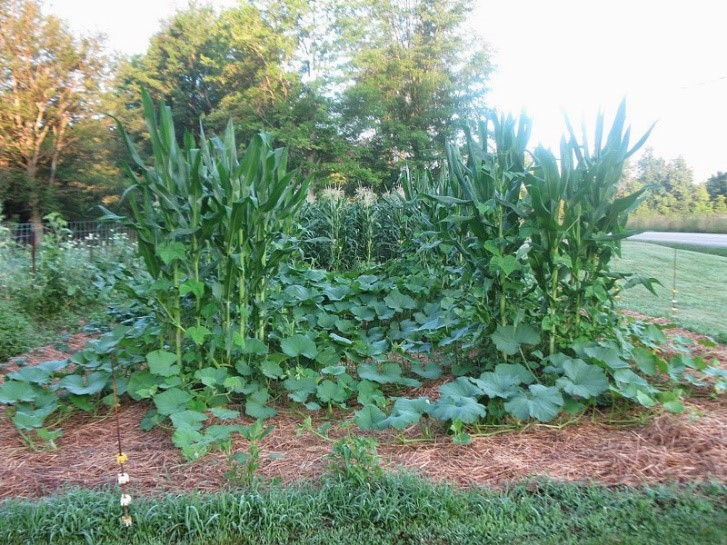 Three Sisters, Elders, or Iroquois mounds are one of the most common and oldest examples of companion planting to be found. Corn, beans and squash are grown in close association, with each plant filling another’s needs. It’s a proven winner large or small, throughout history, including modern university studies on yields and post-harvest soil.

Succotash gardens are also billed as a survival and a storage all-in-one gardens – pretty fair assessments. 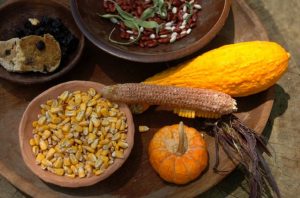 The first in is corn. Pole beans are planted after a delay, and use the corn as a trellis. They also stabilize the corn, removing the need to hill it – which is good, because you’re not going to wiggle a hoe through a thriving Three Sisters mound. The beans also replace some or all of the nitrogen used by the corn and, in trinity plantings, their third sister: squash. The squash helps shade the soil, preserving moisture. 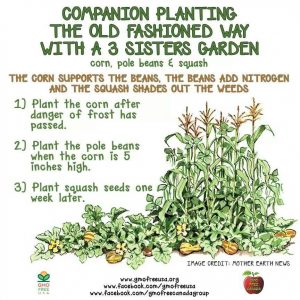 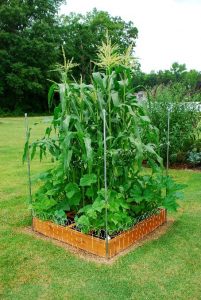 There are now about as many ways to arrange them as there are to use the produce, which we’ll touch on later. We’ll also look at ways we can modify it for the crops commonly grown in today’s backyards, tubs, and big plots, compared to the traditional versions.

The beans are not boosting the nitrogen for this year’s crop. By the end of the season, the beans will have started producing excess nitrogen if the proper bacteria is present, but it’s toward the end of the season. They’re replacing nitrogen used by their companions, which means less amendment is needed in subsequent plantings. 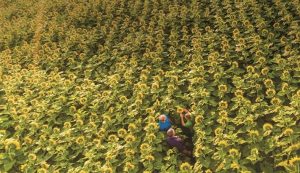 Subbing sunflowers for corn in Elders mounds regularly pops up. It’s more than possible that somebody’s managed successfully, but nobody I know and I’ve yet to find good results/yield data or late-season and harvest images posted by those who claim it works.

When we hear after-action reports on this experiment, it’s usually “well boogers” or excited growers who have not yet established an on-their-own baseline yield for their squash and bean varieties. 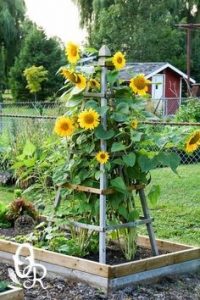 Mostly, like many things, we just don’t hear back on it – which is sad, because some of those gardeners who are just getting started or just branching out are likely embarrassed, and think it’s them.

First: Failures are part of any learning curve. “No” is an option on troubleshooting and decision-making flow charts for a reason. “Well that didn’t work” is part of the feedback loop for everything from permaculture to scientific method. 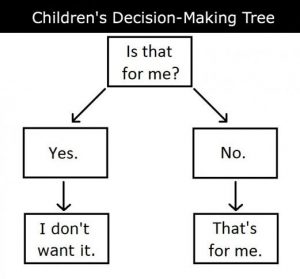 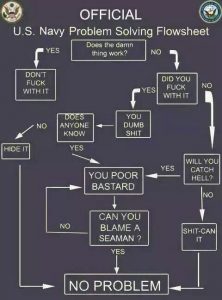 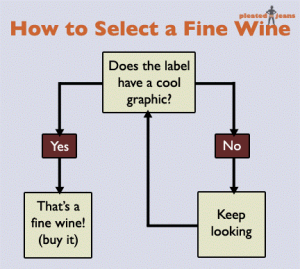 Share failures. We get more feedback yet, which lets us make better adjustments than we would on our own.

Secondly, don’t believe everything you read online – especially start-off suggestions without final results presented. That’s something we’ll touch on with the planting suggestions, too.

I do grow some of my beans with sunflowers, but I expect the major productivity drop versus a corn planting and I do so knowing that bean production is already lower in corn-companionship stands. 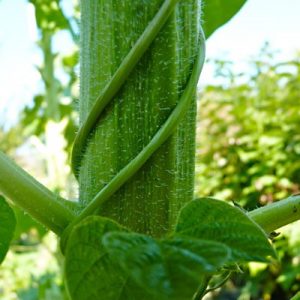 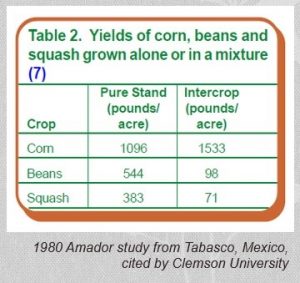 (It’s the total productivity of the space that’s a wowser, versus the same area with a single crop, and usually corn gets a pretty significant boost.)

So let’s understand sunflowers. There is a wide, wide range of sunflowers beyond production types. I plant some of them for tiny bird seed. Plus, well, look how cute! 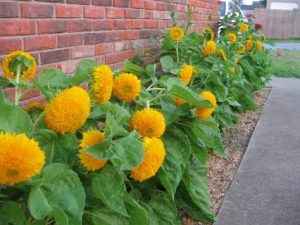 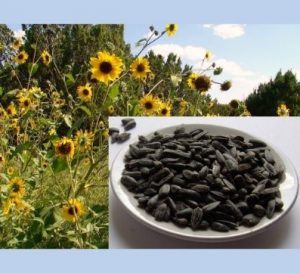 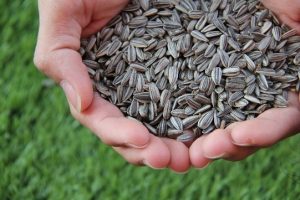 In production conversations, we’re typically looking at two types. Black Oil Sunflower Seeds (BOSS) are used for oils and most animal/bird feed, and are usually 4-6’ tall. The big 8’ and 12’ “stripeys” (professionals say “confection”) are the human-snack and in some animal feeds.

Both are greedy. Like, way greedy. They just don’t share well. There are weed-suppressing groundcovers that work, but whatever you stick near a sunflower is likely to end up stunted. That’s not great for the yields from companions. 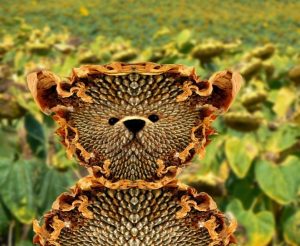 Sunflowers seem like they’d sub in for corn without problems, but in the long run, especially for survival gardens, it’s not effective. You’ll need to plant 3-5x the beans you would to meet your normal harvest baselines from corn-bean mounds or single-crop stands, and if you go for a trinity planting, squash just isn’t going to fair well at all.

*Bonus Tidbit: All sunflower stalks are suitable for drying, burning or chipping, and spreading as potent fertilizer elsewhere because they’re so greedy. They’re particularly potassium-hungry, which makes them a fabulous source of potash for other crops. 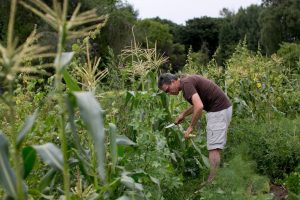 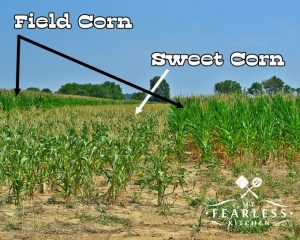 This becomes super significant when planning a succotash garden.

If you use a big, multi-vined pole bean, it’s tough to get in there to harvest sweet corn without snagging the drying bean vines. Sweet corn is usually more loosely branched, so you may be able to wiggle harvests out from around lighter, single-vine pole beans, but there is regularly damage to vines. 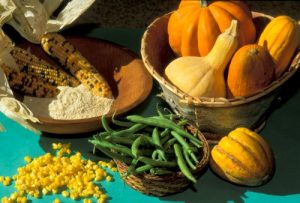 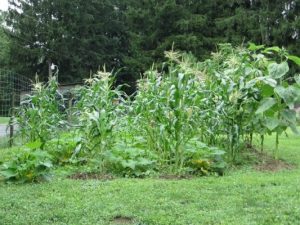 One solution is to use the pole beans mostly for green beans. We can dedicate lower pods to going to seed for us, limiting the potential damages are limited to veggies with less time invested and faster regrowth.

Another option is to use bush, semi-vining or semi-runner beans with sweet corn, so their max height is lower than the upper ears. At most you might damage tips at 3-4’ harvesting the bottom ear. We can also just declare the bottom ears to be our future seed stock, or let them dry for popcorn/milling so we don’t have to disturb even those shorter vines. 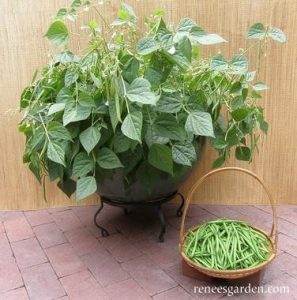 There’s some drawbacks to bush beans, but there’s also benefits. A bush bean won’t typically yield as much as a pole bean, either by the plant or by square-foot.

We have place them carefully, especially with field/dry corn varieties that have denser leafing than sweet corn, or they’ll get shaded out. They’re also a little more likely to be overrun by large squash varieties if we go with a three-species “trinity” mound, so we may have to use bush-type summer squashes. 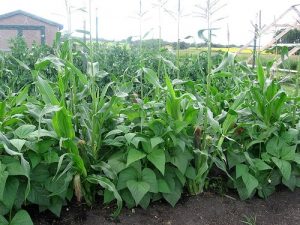 However, they’re pretty easy to step over for maintenance, and they’re fast-growing and fast-yielding. Packing low-growing bush beans in tightly lets us reap some weed and soil-evaporation suppression from them as well as squashes – or if our squash is in separate rows and mounds.

Bush beans won’t anchor our corn for us – although some bush types will send out a few 6-18” tendrils, particularly the “southern pea” types. 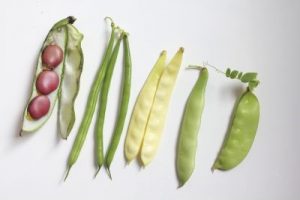 Especially if we’re after sweet corn or working with a bantam, or if we’re working in more limited space, bush beans may be the best option. Instead of traditional beans, we can also consider vining English peas or crowder peas for early and compact corn.

If you really want an old-school, native pairing for corn and don’t have to worry about too much rain, give Bawi a try – https://www.nativeseeds.org/learn/nss-blog/341-celebration-of-tepary-beans-part-1. It’s a prostrate bush type, although it’s a whole different species than the beans most of us know today.

Historically, a near-pumpkin squash, gourd-like squashes, and small true pumpkins were planted as the third sister in elders gardens. We can use anything we want. Melons, trailing-vine squashes, or compact bush types, and even cucumbers offer pretty similar benefits.

Those options have the added advantage of those spiky vines surrounding the mound, which anecdotally deter pests and critters, but we can even use eggplant. It will do the same soil-shading job as the squashes. 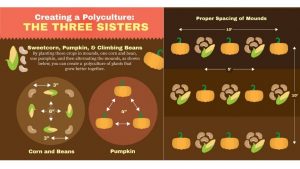 There are a lot of planting plans out there for Three Sisters now. Some combine all three sisters in a trinity planting per mound, while many have squash on a separate mound. Some use 18” mounds, some suggests 3-5’.

One involves working inside a bucket-sized ring (roughly 12”). If you use that one, consider going easy on densities and fertilize heavily – that’s a lot of biomass in a very small space.

I also give my squash way more than 4-6”, my beans go more than 3” from my corn, and my mounds are usually more than 2-3’ on center, more similar to Wampanoag plantings.

Wampanoag systems also have an arc of sunflowers to the north with separate squash mounds and corn-bean mounds filling in a circle. Others suggest similar, but arrange the beans-corn mounds differently. 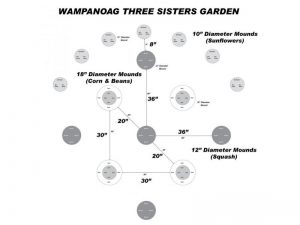 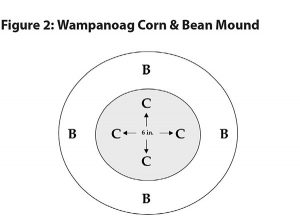 In a bed system versus mounds, I tend to max corn and beans through the center and stick whichever squash varieties I want on the ends of short beds, or create breaks with double or triple squash plants every 10-12’ on long beds. Others break up hilled rows and beds in smaller repeating patterns.

Mechanizing is as easy as setting up hoppers with different seed, and a third hopper or a second pass for a much-decreased squash planting 18-36” offset from them, or alternating rows of corn-and-beans with rows of squash. 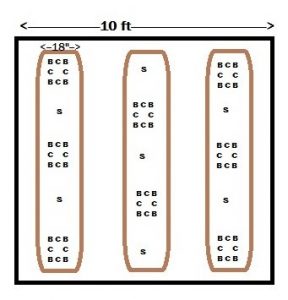 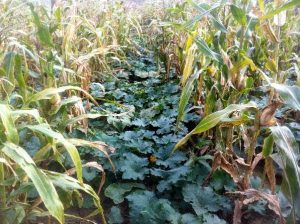 If we’re using narrow beds/rows or containers, we can easily set up multiple pairs – a few bush beans with that squash, or a squash and a pole bean or two that are going to go up one trellis, and another with our corn and another few beans.

We don’t have to limit our squash to containers or beds – trailing them out to the side or letting small-fruiting varieties drape off a table, bench, or rail is fine (if we can get around them). We do want to make sure the squash isn’t vulnerable to breaking in winds or from fruit weight, though. Those big ol’ stalks are hollow and a little bit fragile. 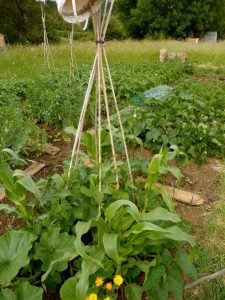 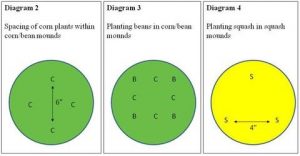 Three Sisters gardening has a lot to balance just because we do have sooo many options these days. What planting styles work best for us will depend on preexisting soil fertility and the varieties we choose, with our climate and space available playing into cultivar selection. There’s a modification that works for pretty much everybody, though.

It’s a storied, proven winner, regardless of scale, for both beginners and those looking to up their yields or decrease inputs. Tractor- or hand-tended, acreage to balcony, it’s definitely a planting scheme to consider.