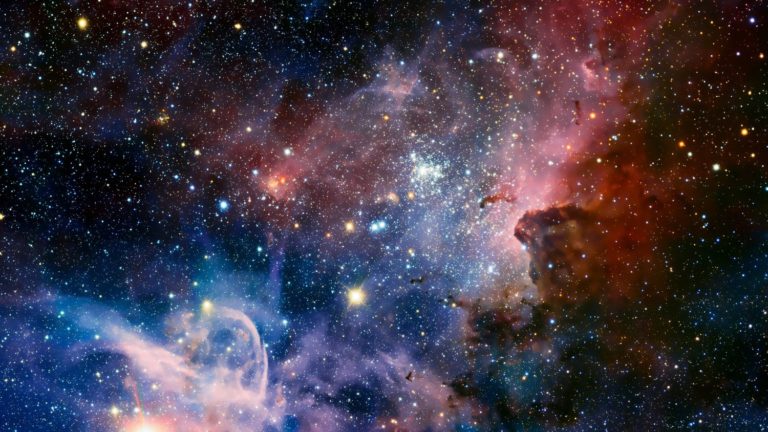 Editors Note: An article from Jaidev Parmer to The Prepper Journal. Did an “extinction level event” really kill the dinosaurs (and, as a result, inflict us with a never-ending series of Jurassic Park movies?) Mr. Parmer presents some very interesting scientific facts, a logical progression and supporting theory. It is a preppers vision that may be new to some of us. And, to be clear, it is the author’s conclusion presented at the end. As always, if you have information for Preppers that you would like to share and be entered into the Prepper Writing Contest with a chance to win one of three Amazon Gift Cards  with the top prize being a $300 card to purchase your own prepping supplies, then enter today!

Open questions in Astrophysics, Geo-sciences and Paleontology are brought together in
an attempt to find a common solution to the problems of these different fields. From As-
trophysics, the nature of dark matter and Matter-Antimatter asymmetry; from Geosciences,
Cosmic Rays, historical atmospheric composition variations and from Paleontology the reasons for the great extinction events in the Earth’s history. These questions are analyzed and a solution is synthesized that attempts to answers these diverse questions, thus a theory that connects all these phenomena is developed. The theory is used to predict the future and the role of Humanity in Earth’s protection.

Introduction – I attempt to analyze the open problems in seemingly unrelated fields and treat them as parts of the elephant of the parable of the blind men. Each problem, a hint to the part of understanding of the system as a whole.

Problem description – In this section I describe the various open or partially resolved problems in sciences:

Dark Matter [Garett, 2011] – The nature of the Dark Matter is one of the most perplexing questions of modern Astrophysics. Five-sixth of all matter is supposed to be in the form of Dark Matter, the salient features of dark matter are that it is supposed to be charge-less since it does not interact with normal matter and light. It is diffuse in the sense that it is not clumped in any way from the smallest to the largest degree. Thus it is neither interstellar gas nor any of space dust, space rocks, comets, asteroids, planets, stars or black holes, nothing made up of ordinary Baryonic matter. It is cold in the sense
that it does not move with high velocity like the velocity of light or else it would have already dispersed. It moves with the same velocity as the stars it envelopes, the stars move around the galaxy center or the velocity of the galaxies that move around in the gravitational center of their clusters. It self-annihilates and produces gamma-radiation near the galaxy centers. It’s presence affects the gravity and movement of the stars in a galaxy and galaxies inside the galaxy clusters. It surrounds a galaxy in a form of a spherical halo inferred from the Gravitational lensing of background stars and galaxies. 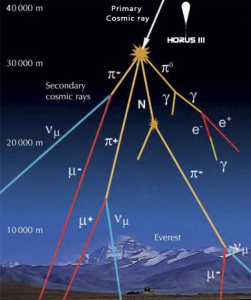 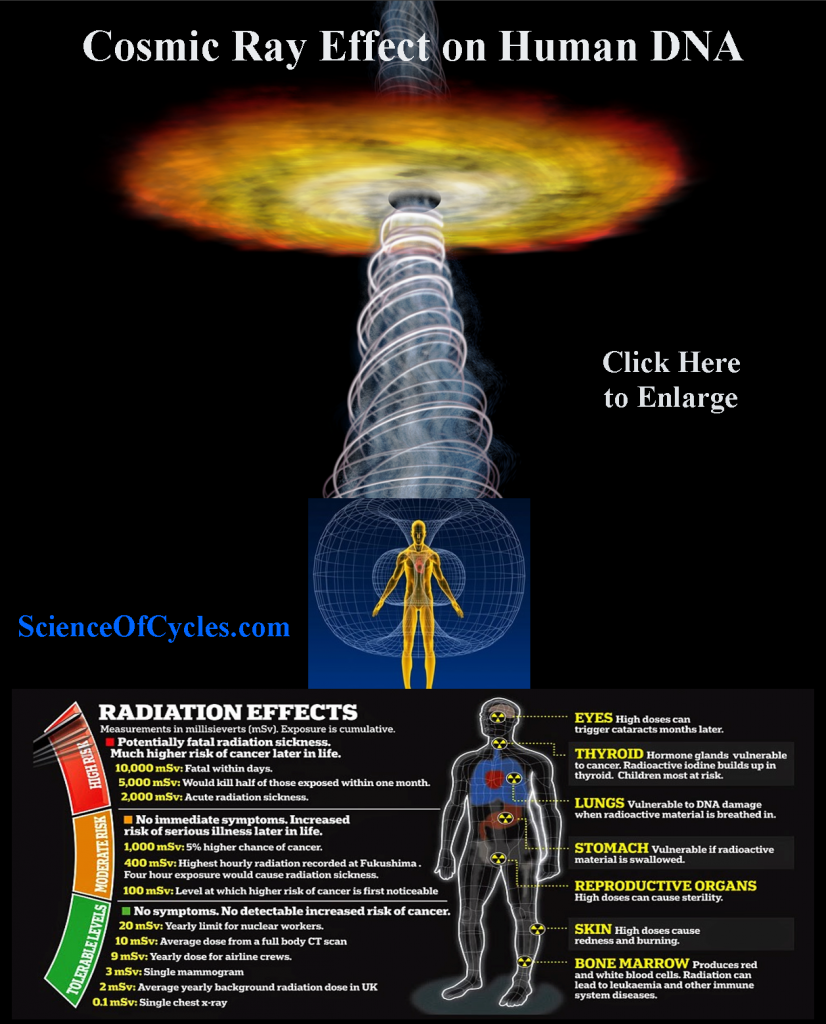 Cosmic Rays – We don’t know the exact origins of the Cosmic rays, they seem to come from all directions. It is said that they composed of protons and atomic nuclei like helium and higher. They have a range of kinetic energies, they interact with the upper atmosphere gases and create secondary particles upon impact with the nuclei of the gaseous atoms in a process called spallation. E.g creation of radioisotope C 14 . Antimatter particles namely positrons and anti-protons have been observed in the the secondary particles generated after the primary cosmic rays have collided with the nuclei of the atmospheric gases. Where does this antimatter come from?

Mass Extinctions [Mass Extinctions] – On the Paleontology front we don’t know what causes the sudden swings in the atmospheric O 2 and CO 2 concentrations. Were these swings the cause of the mass extinctions of the past? 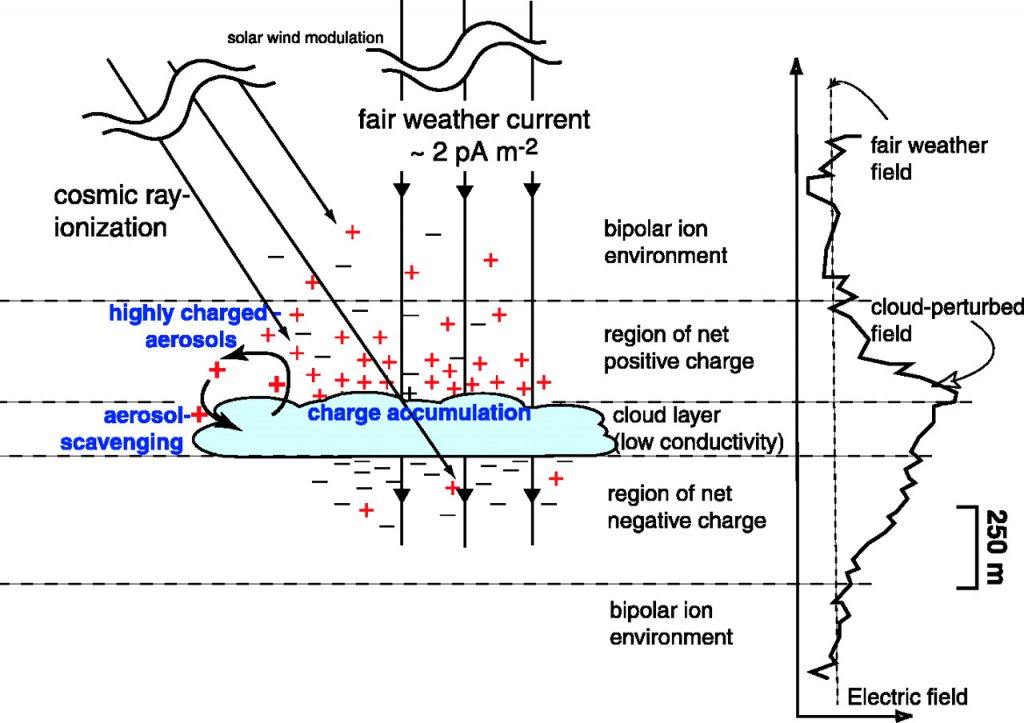 Consider the internal structure of a neutron. The neutron is composed of one up-quark and
two down quarks. Quantum chromodynamics tells us that these quarks come in three colors red, blue and green and they continuously keep on changing colors by the exchange of Gluons this process forms the strong nuclear force and keeps the neutron, a hadron together. What if there are three kinds of neutrons such that the up-quark has a preference for a particular color i.e., assume that the up-quark oscillates for example ··· → g → r → g → b → g ··· i.e there is a preference for green color for the up quark by the exchange of gluons. Similarly there could be preference of red color and for blue color respectively. ··· → r → g → r → b → r → ···and ··· → b → r → b → g → b → ···. Thus the gluon exchange is such that the up-quark color seems to vibrate around a preferred color. 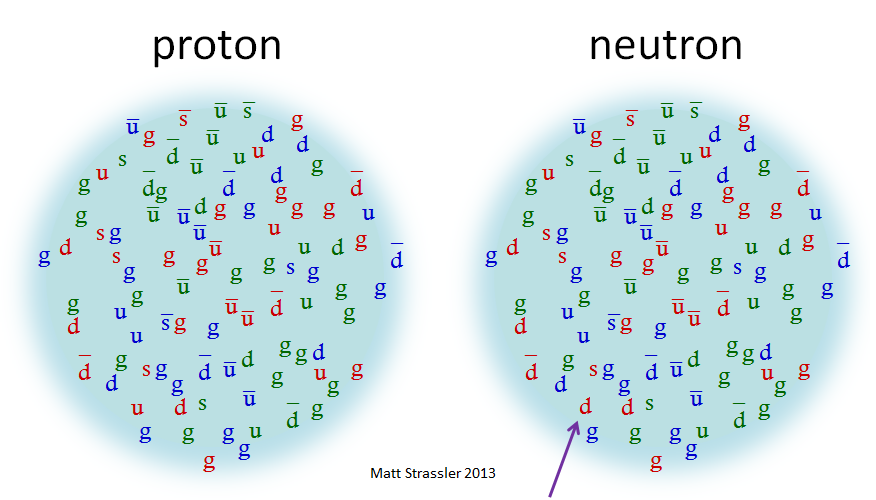 Of the three vibration modes, if one is unstable say the green preference neutron is unstable and the others are stable then if during the big bang these three types of neutron are created equally, then of the three types of neutrons, one type will decay into proton and the other two will remain as neutrons. Further during the big bang, since equal amounts anti-matter is created, equal amounts of anti-neutrons of again three types were also created. Lets assume that all the types of anti-neutrons are stable, then we have in all six neutral types of particles viz., neutrons and anti-neutrons created in equal amounts, out of which one type has decayed into protons and the remaining five have remained as neutral particles in the cosmos. Some support for the above argument comes from the irreconcilable discrepancy in the actual half life values of neutrons by the Bottle and the Beam methods of measurement where the researches have suggested that some neutrons convert into dark matter. The presence of antimatter in cosmic rays, Van Allen
radiation belts and the galaxy center supports that Dark matter has antimatter component.

Applications of the Dark Matter Theory

Atmospheric Composition Variation – The cosmic rays keep continuously bombarding the earth. They interact with the nuclei of the atmosphere and due to their effect the gases undergo spallation reaction, where O 2 and N 2 get fragmented to lighter nuclei like hydrogen, helium, lithium, beryllium, boron and carbon. The evidence comes from continuous generation of radiogenic C 14 (Carbon–14, 14C, or radiocarbon, is a radioactive isotope of carbon with an atomic nucleus containing 6 protons and 8 neutrons. Its presence in organic materials is the basis of the radiocarbon dating method pioneered by Willard Libby and colleagues (1949) to date archaeological, geological and hydro-geological samples.) . Thus I propose that the dark matter will continue to deplete the atmosphere and in future the atmospheric density will continue to decrease due to spallation of N 2 and O 2 . Thus the earlier Earth had denser atmosphere and hence different climate compared to present Earth. The future Earth will have sparser atmosphere and will have a different climate.

Mass Extinctions –  What will happen when the Solar system passes through a cloud of high density Dark matter? The Solar insolation will increase due to the increased nuclear activity on the Solar corona and the surface. On the Earth, the previously explained phenomenon of Atmospheric composition variation will be hugely accelerated. The neutrons and anti-neutrons will convert the atmospheric N 2 and O 2 and will penetrate deep down, the number of neutrons and anti-neutrons hitting the surface will increase. Their ionizing radiation will damage the DNA of the living things and lead to genetic mutations. The spallation will create carbon, boron, beryllium etc from N 2 and O 2 and these created metals and especially carbon will react with the remaining O 2 to from CO 2 , this will increase the green house effect at the same time lead to lower O 2 concentration in the atmosphere. The neutrons will enter deep inside the Earth’s mantle and cause
spallation of the elements in the rocks leading to greater volcanism. The volcanism will release great amounts of heavy metals like mercury in the atmosphere. This mercury will undergo spallation and turn to Iridium, Platinum etc. The signatures of these heavy elements are seen in the geological record at the boundaries of the major extinction events. Thus sudden stress from multiple sources like genetic mutation, high temperature due to greenhouse effect, low oxygen and high CO 2 , high volcanism, heavy metal poisoning will lead to the mass extinction of all life on the Earth. Thus I have explained the core reason for Mass extinctions experienced by Earth in the past. This has happened in the past and will happen in the future. 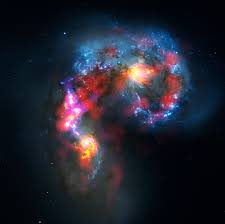 Concluding Message – The danger to our Earth and everything living on her is real and imminent. Humans have to realize the danger from cosmic dark matter and prepare to counteract it by creating shelters like Noah’s arks underground to save the seeds of the various plant and species for future re-population of the planet.

Your article is detailed, thanks to it I solved the problem I am entangled. I will regularly follow your writers and visit this site daily.