When we turn to sustainability, a lot of preppers consider tree fruits for part of our long-term food supply. They can be expensive to buy, so it’s tempting to just plant a seed from the tasty apple we ate for lunch or the fruits of a nearby tree that’s thriving. Johnny Appleseed did it after all.

It’s not quite that easy these days, though. Our most common tree fruits need a little help in the seed-to-plant stage. Then what we get from our 5-20 year investment may be … pretty disappointing. 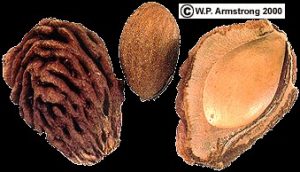 The modern era has changed our fruit trees. They are about as far away from Johnny Appleseed’s as our modes of transportation.

Most of our common domestic tree fruits are not self-fertile. They require another tree, usually of a different variety, to pollinate their flowers. This results in a fruit that is carrying a hybrid seed within it.

Call it a Labrador and a poodle, and your seed is a labradoodle … except, it’s not as predictable in results as those labradoodles are.

That’s because many of the fruit trees purchased in the last 50-70 years are already a hybrid. So now you’re planting the equivalent of a puppy bred from a labradoodle and a bagel (beagle-basset). 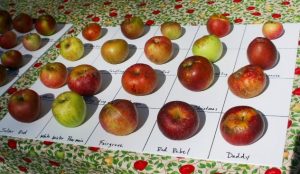 When a plant flowers, it already knows what kind of fruit it’s going to produce. That fruit production is coded into its genetic material. It doesn’t matter what pollinates it, the fruit it bears will be the same.

The pollen carries the additional DNA from a different tree for most of our fruits. That new genetic material affects the seeds (offspring) inside that fruit, and in turn the fruit that offspring will produce. Like any other mutt or hybrid, it’s a BINGO pull for which parent’s genes end up in each of the offspring.

Then, there are the ways those genes interact with each other. 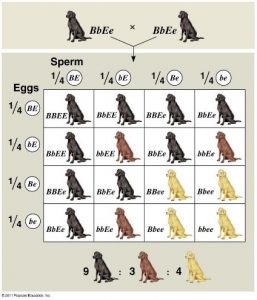 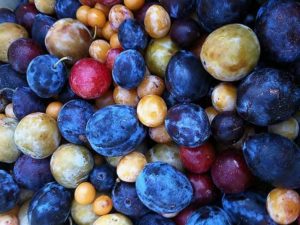 With some genes, there’s a straight on-off switch. In many cases, however, multiple sets of genes impact the same trait(s). Labrador coloring is one fairly simple example of gene expression.

Plants – to include our fruit trees – can inherit the same mixes of traits, which will affect our future trees. You can also get the same throwback results and the same potential of mutation, with some mutations positive for the species, some waiting hidden for years and eons, and some pretty negative.

Resulting trees and their fruits may be lacking in flavor or texture, produce very small amounts instead of bushels, be unable to support the weight of its fruit so they all snap off and drop before they ripen, or might create a throwback to a medlar. It might be two feet tall, ten feet tall, or twenty feet tall, spindly or shrub-like or lollypop-umbrella “tree” shaped. Its roots might be polite or might run along the surface.

Takeaway: Just because you like the fruit, the fruits from the seed inside are most likely going to be different. 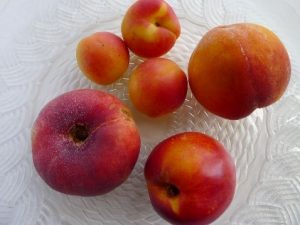 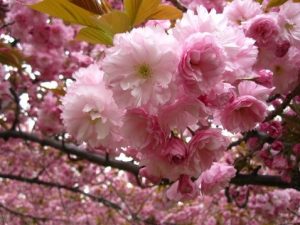 That’s assuming the seed is actually capable of developing into a mature tree, and a fruit-bearing tree. Non-fruiting ornamental varieties of trees are also the result of hybridization. Disease and pest resistance may vary greatly from the parents.

Plus, the new hybrid may or may not make a good pollination partner with the existing trees or its newly sprouted hybrid-hybrid brothers and sisters. Fruits usually come in several prime pollination and flowering “seasons”, and sometimes have only a handful of other varieties that will work well as a pollinator for them. 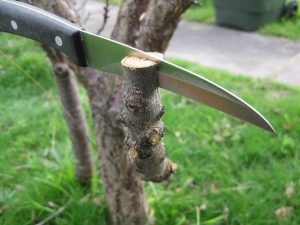 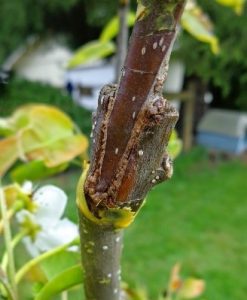 On top of the high likelihood that your parent trees were both hybrids and your seed is likely to conceal all kinds of throwback and combination genetics, it’s very likely that if a tree was purchased in the last 20 years, it’s grafted.

Grafting is when you take a root from one tree, and glue a stick from a different tree on top of it. (Every botanist and arborist just twitched at that oversimplification. You’re welcome.)

Mostly, grafting is done to control size or to place a favorable fruiting variety on a root stock that can handle soil conditions better than that fruiting species. Sometimes it’s done to create the “tree of many fruits” combinations, or to make “self” fertile apples and peaches.

The root stock in no way affects the genetic material that’s carried by either the hybrid pollen donor or the hybrid female flower that will turn that pollen into a seed. However, it does create an additional set of issues due to the introduction of that fifth (and potentially sixth if it, too, is a hybrid) set of genetics into the “successful tree” gamble.

The problem for home growers who want to propagate their own trees is that the root stock defines a lot of the tree’s success, while the scion that will grow into the trunk and limbs determines the actual fruits you’ll harvest. Without the root stock, that scion may not even survive long-term. 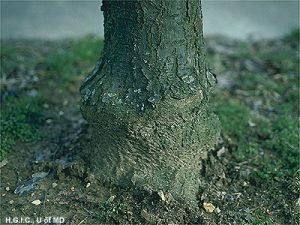 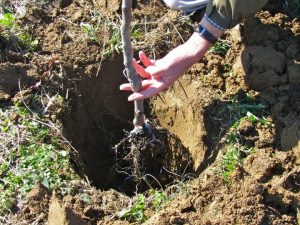 First off, if you bought an apple, cherry, peach, plum, or pear tree in the last 20 years, I’m pretty comfortable saying it’s grafted. But maybe not. If not, you probably hunted hard to get your pure-bred, non-grafted, standard-sized heirloom, and know it’s not grafted.

If you want to check, look at the base of your tree. If you’re into mulch volcanos (many Americans are), you may want to move some of the material away from the base of the tree.

You’re looking for a ring or bulge somewhere right above where the roots start spreading out horizontally, sometimes up to 1-2’ above that point. That’s the scar tissue from where your tree was grafted onto its root stock.

Some trees are sneaky (by which I mean they heal flawlessly), and some botanists and arborists are artistic masters who should be working in cosmetic surgery, so it’s not 100% that you’ll find the scar. To further complicate it, there’s chip budding that is sometimes done, and grafting not the trunk, but limbs, which requires looking higher on the tree.

For the most part, though, look for that bulge or scar, in a circle or a series of them within 1-2’ of the soil and root levels. That’s your clue that you aren’t dealing with just one hybrid, but have an additional set of genetics contributing to the tree’s success. 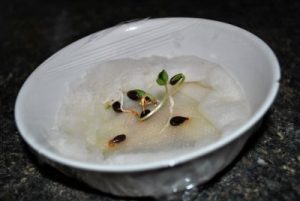 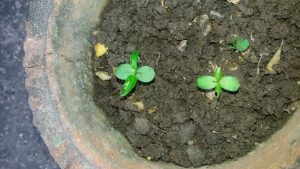 Still want to try that seed for future apples? Or, want to try to breed some successful root stock crops for your area? Sometimes just tossing an apple core as-is works. It’s how we get apples growing in the woods around school campuses all over the world.

However, there are more reliable methods that can increase your chances of getting a tree to actually grow from that seed.

You can separate the seeds and plant clusters of 3-8 spaced 2-4” apart, with clusters separated by 4-8” in a row or mound. Top it with sand for the least-compaction potentials. 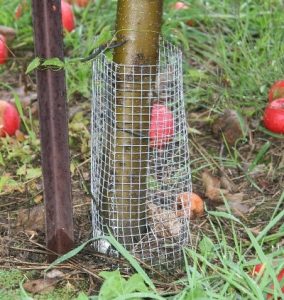 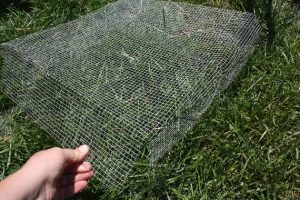 If you have problems with rodents, cover the seeds with some screen or wire mesh, similar to planting bulbs in “cages” but with the ability to cut it free and bend it up as the seedling grows to avoid girdling it.

At that stage, you may be digging them to graft and transplant, or you might be thinning to 6-25’ with the intention to graft in-situ, or just wing it and let them grow up. Whichever the goal, you want to go ahead and thin before their roots become too entangled.

Spring planted seeds are less likely to sprout the same year, and can be susceptible to late frosts and heavy rains or rotting in saturated soils. Autumn-planted sprouts may need mulched over – similar to strawberries – to protect them over winter.

A 6-to-24-hour lukewarm water soak ahead of planting out in spring will increase germination rates – which are typically pretty low for fruit trees. 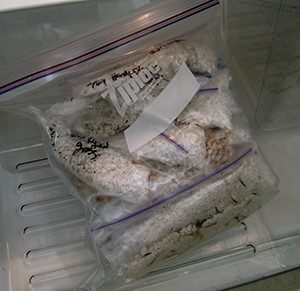 Another method is to keep seeds cool and dry until 60 days before spring planting. At the -60 mark, the seeds are moved to damp (not soaking wet) straw, sawdust, peat moss, sphagnum moss, or sand and kept in the fridge.

You can also do the fridge stratification, and transplant into bags or cells. I prefer bags, because you slit or untie them, and transplant a full plug without ever disturbing the roots. A tree with a healthy tap root will be more successful and need less help later on in life.

For fruits like peaches and plums with their thick pits, you can help them out by gently cracking that tough armor when you get to the damp stratification, pre-soak, or are directly sowing them. There’s a tiny tree embryo in there, so be gentle. Nut crackers, a thin hand saw, and gentle taps with a hammer are all ways to open up that pit. 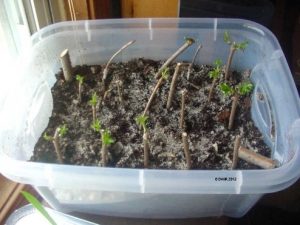 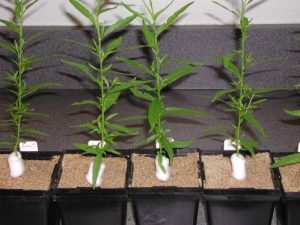 It’s Not All Bad News

Personally, I’m not much of a gambler. Especially when it comes to months, years and decades of time and space investment, I’m more comfortable with a sure thing. So how do I plan to continue propagating fruit trees?

I do it the same way the pro’s do to put those apples in the supermarket and all those baby trees in newspaper tubes for sale at Tractor Supply – grafting.

Those trees that are so hard to predict and so hard to sprout are pretty incredibly easy to graft. Not only do they form fast bonds, they’re pretty adaptable to “whose” roots you stick them on.

There are copious YouTube and web instructions for various types of root grafting and scion propagation. Some of the county and state extension offices, Master Gardener programs, and co-ops put out region-specific information that can help, too. 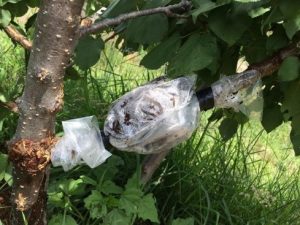 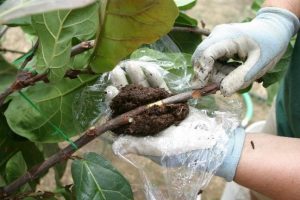 When I said I’m not much into gambling, and that I propagate root-scion combinations to replace trees and expand my orchards, I lied a little bit. I don’t like gambling on 10% germination, 50% survival rates from that 10%, and waiting 5-20 years to see if my lottery numbers get called.

Instead, I air layer limbs. Usually air layering is done with pencil-thick woody stems. If I can support the weight, I’ll use milk jugs and do limbs even 1-1.5” across.

By propagating a limb, I make a 2-8’ “sapling” in 3-6 months. It cuts years off the wait time and increases my survival rates from <5% to better than 70% (remember, that new tree is lacking the root stock that made my first tree successful).

Too, because it’s a clone of the tree limb that’s already giving me fruit, I already know that if it does survive, I have pollination partners that work for it on the property, which I can also propagate, and I know it produces a yield I actually want.

Yeah, I’m never going to discover the next Fuji or Methley, but I’m comfortable with that.

“Yeah, I’m never going to discover the next Fuji or Methley, but I’m comfortable with that.”

How do you think they’re discovered.

I have seen lots (!) of variation, probably 4 times out of 5, but have never arrived at a fruit which was inferior, or unfit to eat — assuming that it is thinned, watered, pruned, etc, etc.

Uh…the comment itself acknowledges how they’re discovered: somebody willing to gamble the wait time of years on hybrids. Methley plums are typically rooted onto sand cherries or one of the cultivated wild plums for dwarf varieties, and one of a handful of regional and supplier-preferred peaches for standard varieties, so that’s not actually all that far off from what I more typically do. I should have picked a better example, that being the case. Still, it’s been around for a thousand years or so, pretty much intact if growers are to be believed, so you’d think if the newer hybrid… Read more »

Glad we were able to give you a starting point on this one!
Thank you!
-Rebecca Ann