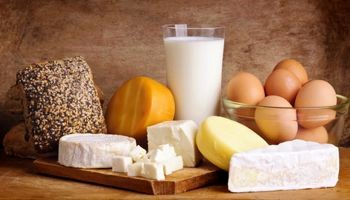 An overabundance of eggs or milk is a good problem to have. It’s one some families will never experience, but it’s a common enough problem that it pops up annually on Facebook groups, homesteading and preparedness forums, and family gatherings.

I’m a huge proponent of various preservation methods, from freezing and oiling eggs to churning and pressing home-raised milk into salted butters and hard cheeses for later use. I’m especially a fan of the pre-modern storage methods. Sometimes, though, there’s just not enough time or space to develop skills or store it all.

If we have livestock and pets, they’re happy to help us deal with those gluts, as well as our table and garden scraps. In many cases, they’ll reward us with increased health or production as a result. Almost always, if we’re paying for our feed anyway, labor or cash, using our gluts can help us cut some of the costs. 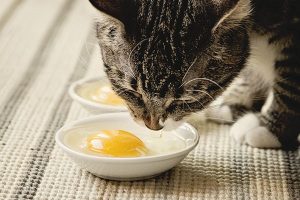 One of those things that so commonly pops up at day classes, tours, and online is an overabundance of eggs. There are many ways to use and store them, but sometimes there are still eggs ad nauseam.

Easy fix. It starts with scrambling them. You can cook a whole lot of eggs really quickly in either a steam table tray or a lasagna dish. You can even use a big metal mixing bowl. 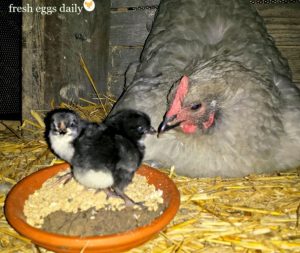 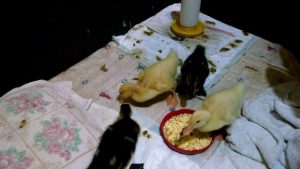 You do want to scramble them, or boil and mince them. Otherwise, birds and other animals start associating those ovals with tasty nibbles.

Once that habits starts, it’s hard to break and it regularly spreads.

(Psst … Watch hogs – They don’t need the introduction to know eggs are tasty. It’s in their genetic coding to eat eggs of pretty much any kind.)

Eggs are fantastic due to the protein content – it’s usually proteins we’re paying the most for in our pet and livestock feeds. And while rich, most animals have no problem consuming them.

That makes them an excellent addition or replacement for dogs, cats, any poultry, and pigs – especially the young birds that need higher levels of protein to grow, carnivourous pets, and high-production laying hens. 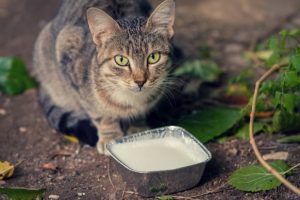 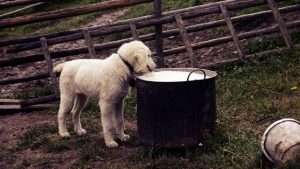 Like eggs, milk is an excellent source of protein and calories. Most poultry is sensitive to milk and other dairy products, however, cats, dogs, and pigs can handle raw milks and pasteurized goat or sheep milk just fine, even if they’re lactose intolerant with supermarket milks.

Pasteurization destroys some of the milk enzymes as well as bacteria and viruses that cause illness. It’s those enzymes – still present in raw milk and soft products made from raw milk – that make it more digestible. Goat and sheep milk have different types of fats and enzymes, which leave them more consumable for more of the population than cattle milks.

(Psst … Penn State did a dairy waste milk study in 2015. They suggest not giving finishing hogs commercial milk due to antibiotic presence, but saw 6-7% cost decreases when nursery hogs were offered that waste milk.)

Whole milk is too rich a resource to let it go to waste. It’s also rich enough that if it’s being given as more than a dribble for cats and dogs, or a quart or half gallon for hogs, it’s worth doing some figuring with a Pearson square for proteins (and calories) so you can cut back on other feeds.

That’s the point, after all. Using up our gluts, but doing it in a way that doesn’t increase the cost we’ve already put into producing those gluts. 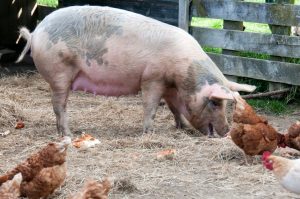 In many cases, chickens and hogs will eat anything that doesn’t eat them first. It’s one of the things that makes them useful on a homestead of any size. Goats that can help keep fields and fences cleared are also big winners.

Chickens especially, though, sometimes just aren’t capable of being foragers, and won’t survive or thrive on the same levels of feed substitution.

There’s a big difference between homestead-bred dual-purpose heritage breed birds that hunt but are easy to handle like the Dominique, and something like the white cross hybrids that would die of heart attacks or develop broken legs from their own body weight by 9-12 months of age.

There’s also a big difference in birds that have no idea you can peck into the big orange thing for tasty squash and seeds, and birds that grew up thinking it was totally natural to at least attempt to munch anything in the same space as them.

It’s not just the egg-meat yields. As with dipping a chick’s beak to show it how to eat and drink, some of our livestock have lost the skill to feed themselves, even heritage breeds.

If you’re going to try to use some of the garden produce to replace feeds, especially, you’ll want one that’s been bred to have an adaptable stomach.

They compile ratings that include foraging skills (and predator savviness) along with other breed information.

Working with breeds that can do well on self-found foods, rough browse over higher-protein, higher-calorie hays and grains – even if their production is lower – isn’t just useful for decreasing glut wastes. The ability to replace feeds, not just give a treat, becomes a sustainability issue for truly long-term disasters.

Cats and ferrets, too, may take a while to warm up to the idea of new foods if they’re straight bag-can animals. I hear there are picky dogs, too. I haven’t actually run into any that aren’t delighted by milk or eggs and scraps, but I hear they’re out there. Somewhere. 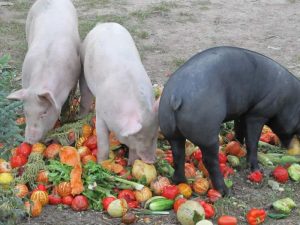 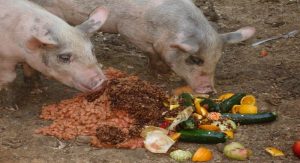 Sometimes as I follow along various blogs and social media, I end up feeling sorry for somebody. That was the case when I read this article http://farmfolly.com/2011/03/complete-costs-of-raising-pigs/. It’s a fabulous write-up about home-raised hogs, with excellent price and input-output charting.

What I want to draw attention to is what they fed their hogs, and the realizations they reached once it was all said and done.

Two market-sized hogs of a lean, meat-heavy breed consumed 1,350# swine feed, 50# squash (pumpkins), and 38# of eggs (ten eggs per pound, 380 eggs). They got other garden produce as well, but those were the significant sources of proteins and calories.

And in the end, all the labor, cost, water and feed/fertilizer that went into those eggs and pumpkins amounted to barely more than 1 percent of the hogs’ diets.

The author surmises that feeding hogs on grain is inefficient. I have to assume that’s a typo, or a reflection of hogs’ efficiency – not grain efficiency. I feel safer in that assumption since the author makes the point, “We had hoped these would reduce our feed bill. The numbers tell a different story … One really gains a sense for how calorie dense grain is when you realize that 380 eggs and 50 pounds of squash represent the calorie contents of just 18 pounds of grain.” 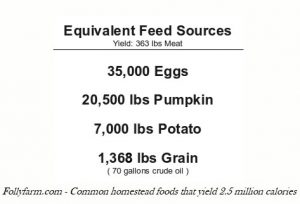 That’s not intended to blast a hole in everything I’ve said about using up gluts. It’s intended to make us aware of the effort-reward scale that will be vital if we’re trying to cut cords now or planning to live off our land at some point.

What we feed – to which animals – should factor in the type of animals.

Those 380 eggs go almost nowhere between two hogs – 1.4-1.6% of their total feed for the ones raised by that blogger. That’s about 2 days at market weight, off the annual yield of a high-producing layer – which is being fed as well, and high-quality specialized feed at that.

In prepper world-down conversions, I can just about keep those dogs for two months off the annual yield of a single high-yielding hen on bagged feed or a pair of hens fed off mixed forage, garden patrol, and worm bins. 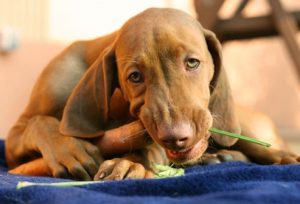 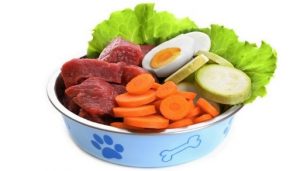 Then, being me, I bang my head at the thought of feeding an animal that can thrive as an herbivore pumpkins instead of grain.

(Psst … if you can produce 50# of pumpkins, you can produce 18# of wheat, barley and oats – usually with fewer pests, irrigation, and fertilizer, regularly in less time, and reap far higher protein yields while you’re at it, along with bedding straw or mulch.)

When we opt to feed gluts, or aim for production, we need to consider each component in our system, and weigh where our efforts are being placed.  I’m better served using my glut for an animal where it makes a significant difference than I am something where it barely even registers in their feed needs.

That’s one place where a SWOT analysis intended for business practice can be a huge benefit.

For that, I need to have done my homework on each animal. How efficiently they convert those foods depends on calorie and proteins and total bulk needs. It goes back to size, type, and specific breed – and the specific genetic lines of those breeds. 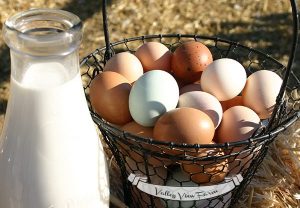 Whenever we change feeds, it’s a good idea to do so slowly. We also want to be careful how much rich foods we offer at once.

The 10 percent-10 days rule works like a charm for most animals, although I rarely use it since I’ve been hugely lucky with my stock and pets.

If your animals have a history of intolerance or sensitivity, and with young or senior animals, consider moving very slowly indeed. However, animals that often get a variety of foods commonly keep diverse gut bacteria that decreases the risk of having negative reactions.

At some point, if we’re looking at a long-term disaster – whether it’s an extended job loss, an issue that interrupts shipping or our ability to fetch feeds, or a major national or international disaster – we’ll have to consider the sustainability of our animals. Having some tricks in the back pocket to make use of gluts can help us make plans, as well as avoid waste.