Best Books for Your Preparedness Library 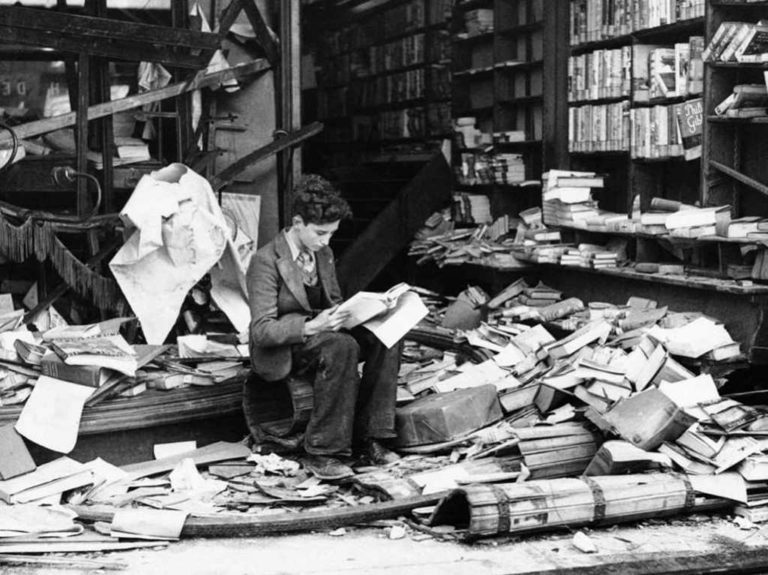 Editors Note: Another guest contribution from valknut79 to The Prepper Journal.  The opinions expressed herein are his and should generate a lot of comments as we all have our favorites on this subject.

When the world as we know it comes crashing down, I think we all know the value of a farmer or an architect, and the value of a sharpshooter or outdoorsman.  Once things start to settle down again, I think that the value of a storyteller suddenly grows in importance, and a certain level of entertainment once again becomes an expected and valued part of society.  In ancient times, oral histories were a way of passing down stories certainly, but they also had great value in terms of teaching important lessons, changing perspectives, building communities, and bringing people together.

As a high school English teacher by trade, I firmly believe in the power and the value of having a good library at home.  A book can provide knowledge or wisdom, companionship and life lessons, and can help you develop a lot of self-knowledge as well.  Here are my suggestions for books that would be potentially very valuable for preppers to own and read before, during and after an SHTF situation.

Pulp fiction is a specialized genre of literature that was particularly popular in the early part of the 20th century, referring to short stories that were published in literary magazines of the time.  My personal favorites are the Conan stories of Robert E Howard, the action-adventure stories of Tarzan and John Carter by Edgar Rice Burroughs, anything by HP Lovecraft, or while technically too early for their period but filling a similar role, the Sherlock Holmes mysteries of Sir Arthur Conan Doyle.  Isaac Asimov is also considered part of this genre, and does good work with science fiction.

These stories, which are all freely available online or available in collections at Barnes and Noble for a fair price, are not perfectly written.  Some reflect their times a little too accurately and are borderline racist or misogynist (especially Howard), and may not necessarily speak to everyone in a modern audience.  That said, these are the perfect campfire stories, and the plot, pacing, and occasional bits of character development are masterful. I equate these stories to a TV episode or sitcom – most are independent adventures that tell a complete story within 20 or 30 pages – and have a certain panache and style that I believe would suit the kind of stories you’d tell your buddies after an SHTF situation.  A take-no-nonsense hero who solves his problems with his great bran, superior intelligence, or tremendous cunning makes a simple and uplifting story that I think would inspire in a difficult situation.

The Wheel of Time Series by Robert Jordan and Brandon Sanderson

High Fantasy is a take-it-or-leave-it genre for most readers.  While I tend to lean on the leave-it side, I cannot underestimate the importance and the power of the Wheel of Time series.  This 15-book series (including the prequel) is easily the longest series I’d ever consider recommending, especially considering that each of the novels in the series is two to three times as long as your average best-seller.  As a series of great length, this is not the kind of series you can undertake lightly, but the payoff is very worthwhile.

The length and depth of the series, however, is not what makes it a recommended read for preppers.  At its core, the Wheel of Time series is about accepting that the world as we know it today is not going to last.  The end is near for these characters, and they know it. The individual reactions of each are predictable (these are the heroes after all), but may be illuminating and inspiring for those in your group who are not prepared for the worst.

Ultimately, the plot line follows the main character of the series as he struggles to identify with his destiny as someone who simultaneous destroys the world and saves it, and through the books he does come to realize that whether in living or dying, it’s important to keep fighting, to leave the world a better place than he found it, and to help build a legacy of which he can be proud.  The wide variety of characters add color and supply a steady stream of small pearls of wisdom and inspiration throughout, and many of them have become closer friends than some of the real people I interact with every day.  Those are lessons that every prepper should understand and appreciate, even if the format of these books may be too much for many to handle.

Shortly after I finished reading this series, one of my students was diagnosed with a rare form of bone cancer.  She was understandably devastated.  I chose the first book in this series to give her, telling her at the time that, whether you like it or not, sometimes you just have to buckle down, accept what life gives you, and try to do your best anyways.  She lived her life according to those principles, and I like to think that perhaps this had some part in her emotional recovery.

And if you don’t like, it, you’ll have a year’s supply of toilet paper in the bindings. 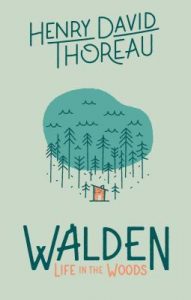 Thoreau’s classic, Walden, also finds a spot close to the top of my list.  While his seminal essay on living life alone near a pond is sometimes very difficult to read and often highly opinionated towards minimalist ideals that may have preppers shaking their fists, Walden is, first and foremost, a story about learning to live a simpler life, being self-sufficient, and largely doing things your own way.  Preparedness is a lifestyle that so often leans towards an old-fashioned lifestyle, “useless” life skills like learning to make a fire or build a shelter, and Walden remains one of the most important stories of a life led largely apart from society, convention and modern convenience.  There is an illustrated hardcover version produced by Fall Creek Press which is often on sale for less than $10.

Life as We Knew It (series) by Susan Beth Pfeffer 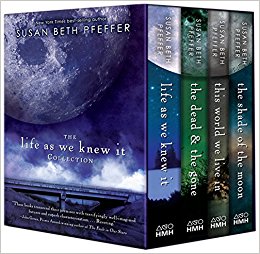 Anyone who interacts with or parents teenagers knows of their penchant for being completely addicted to technology and instantaneous communication, knowledge and results, and their general disdain for the lifestyle of preparedness.  I find that the best way to start in interest in, or even a conversation about prepping might be to start with introducing your teens (and perhaps even your significant other) to the Life as We Knew It series.  This story, written from the perspective of a teenage girl’s diary, chronicles an SHTF situation which involves a disruption of tidal patterns.  This is perhaps not the most realistic novel, but in terms of story, pacing and plot, it does a very good job of not only entertaining, but also informing and getting the mental gears turning.  I think that this book more than any other SHTF novel I’ve experienced yet, will get teens talking about what they’d do in a crisis situation, how they’d adapt, and what they may be willing to look into now in order to help out later.

This book is part of a series, but I found the first novel to be far and away the best, while the later entries suffered.  If you try it and like it a great deal, consider getting the sequels. 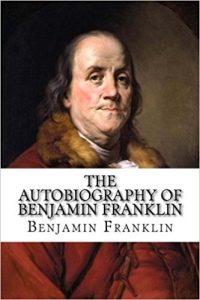 If there is one person who represents what it truly means to be American, I think that it might have to be Benjamin Franklin.  He remains perhaps the most approachable of all historical figures from that time period, and it’s not hard to imagine sitting down with him at the pub with a glass of his favorite Madeira wine and showing him the marvels of the internet age.  His Autobiography, while widely characterized as a too-heavily edited version of his life, does make for a entertaining read, but also one that has the potential to teach a variety of life lessons. 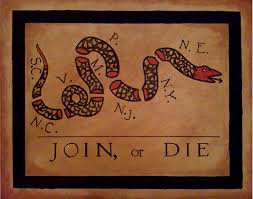 From his famous treatises on moral perfection, which systematizes Franklin’s own attempts to better himself, to his carefully worded passages on industry, in which he makes a very distinct point to say that appearing to be industrious is just as important as actually being that way, this book characterizes a simple, learned way of life that focuses on community and service to others.  Whether you see him as a fatherly scientist entrusting his lessons to a younger generation, or one of America’s greatest libertines and con men, the Autobiography is a book about building a new society from nothing, improving it far beyond what it was in former times, and at least ostensibly, doing so while preserving a hard-working character and social graces.  It’s not hard to see this man as a potential prepper or as someone you’d want by your side in an SHTF situation.

“Now” is actually a book about business leadership more than anything, but it has strong applicable life lessons that preppers could benefit from.

The ultimate thesis about this book is very simple – do what you’re good at, because you can’t be truly well-rounded – and goes through the identification of your individual strengths, a description of the science behind Strengths-Based psychology, and has a section on how you can work around your weaknesses (or areas of “non-talent”).  This is one the books that I think has most influenced my personal development, and is a valuable reminder to those who are the do-all types that want to pursue 75 different hobbies without specializing that this is a course of action that is designed to fail.  This may not be the most entertaining book in the list, but is one of the foundational reads that I recommend to anyone attempting to learn or better themselves.

This is the one book I’d recommend purchasing new rather than used – it comes with a one-time-use online code to take the “StrengthsFinder” test from Gallup, which is the method you’ll use to identify your Top 5 Talent areas. 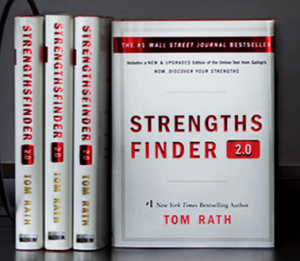 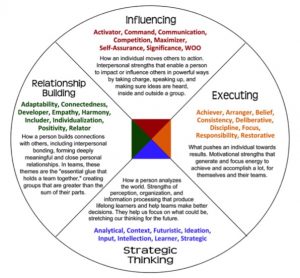 Narrowing down a list of books for a preparedness library is impossible without imposing certain qualifications.  I did not include cookbooks, survival skills books, or any strictly informational books on subjects like gardening, camping, farming, and raising chickens.  Those are, in my opinion, quite obvious choices for preppers and so abundant that you can just pick up a huge quantity at a local library book sale without being overly picky about gathering specific volumes.  These are stories, whether strictly for entertainment or for improvement through gaining wisdom.

These are not all personal favorites, and do not necessarily represent a wide variety of literary styles, but do have what I would consider to be valuable life lessons that reflect a “prepared” lifestyle.  I did attempt to focus on books that are uplifting – while I do love a good murder mystery or horror title now and again, I think that an SHTF situation requires a little tact – and these stories also have a certain element of timelessness or classicists to them.  One hundred years from now, I think there will still be those who love Conan and friends as much as I do now.

That said, my library is constantly growing, and I’m always open to learning about new books to add to my collection.  What books do you consider indispensable?

Thanks for the given this wonder full post for me have to looking the online best feature for set alarm clock windows 10 to help you save to all time by working forever so thanks for the update.

Should I read autobiography of Benjamin Franklin?